so I will cut to the chase and tell you this meal- was to my mind- flawless... some truly different and amazing courses and a number of terrific wines as well.  we met our friends Mon & Beth for dinner at "Intro Chicago" which was our introduction to the place but they had been there for the two prior menus.  The deal here is that every three or four months this place introduces a new chef to Chicago. In the instance of our meal the chef came from California - a little bio from the website-

Orange County, CA. native Chef Aaron Martinez graduated from the Arizona Culinary Institute in 2003. After graduation, he moved to Southern California and took his first cooking position at The Prado in San Diego, CA. In 2006, he transitioned into fine dining, opening Addison, the signature restaurant of the Fairmont Grand Del Mar as a Chef de Partie working under acclaimed Chef William Bradley.
While at Addison, Martinez traveled to Spain to stage at Restaurante Martin Berasategui in San Sebastian as well as Berasategui’s two Michelin star restaurant Lasarte in Barcelona. Martinez left Addison in 2009 to continue his travels which brought him next to West Flanders, Belgium where he was given the opportunity to work under Chef Kobe Desramaults at In de Wulf. It was here that he honed his style of classic French cooking, utilizing modern, lighter techniques.
In 2011, he returned to the states and landed in the San Francisco Bay Area as the Sous Chef at Quince working under Chef Michael Tusk and preparing a modern French tasting menu with Italian influence. During his tenure at Quince, he was promoted to Chef de Cuisine and the restaurant was also awarded an additional Michelin star, jumping from one to two stars.
Martinez then accepted his dream position to run the kitchen at Commis restaurant in Oakland, CA as Chef de Cuisine. He had always wanted to work for Chef/Owner James Syhabout and Commis spoke to his passion of running a small restaurant; similar to the kitchens he worked in during his time in Europe. At the 25 seat fine dining restaurant, Martinez prepared an award winning modern French tasting menu utilizing California ingredients.
Beginning in August 2015, Martinez will helm the kitchen at Lettuce Entertain You’s award-winning, rotating chef restaurant, Intro, as the third chef-in-residence.
so we brought a selection of wines to accompany dinner and had a first rate meal - which I will start with a photo of the amuse - granita of blueberries and basil which was a great combo of flavors- sweet and herbal...a positive start- and we had opened the Gosset (which was not showing well- tasting more like cider than champagne) 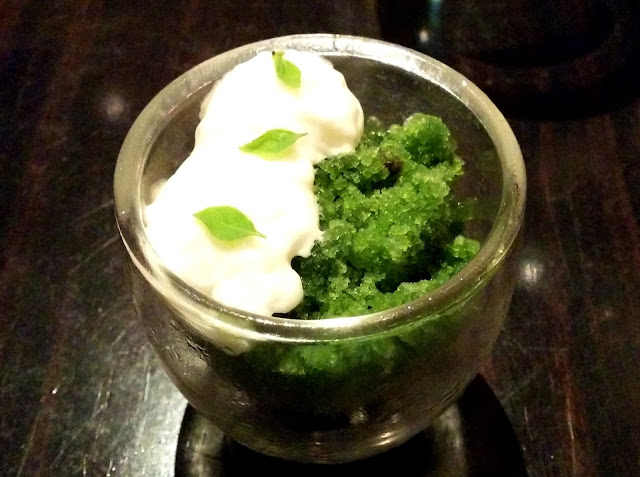 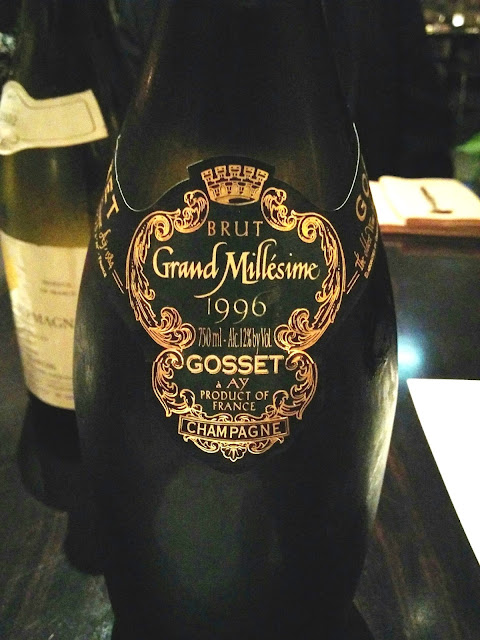 the menu had an optional addition- of an abalone course for two (which we all added) and Beth and I subbed a black cod for the lamb... 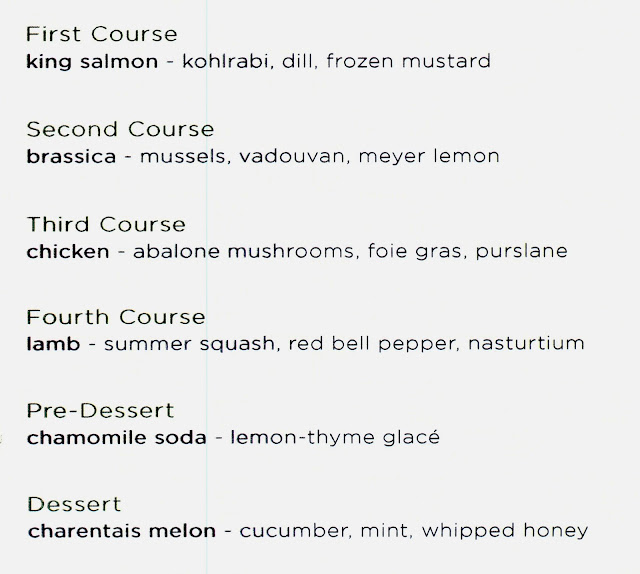 not only was the meal tasty it was beautiful! every course - excellent so it was hard to pick favorites 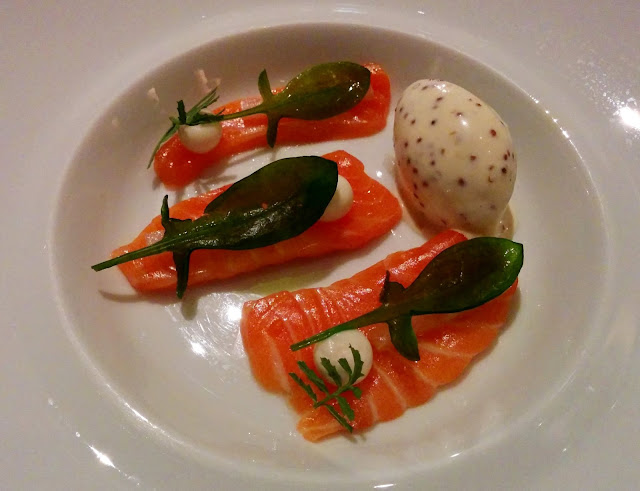 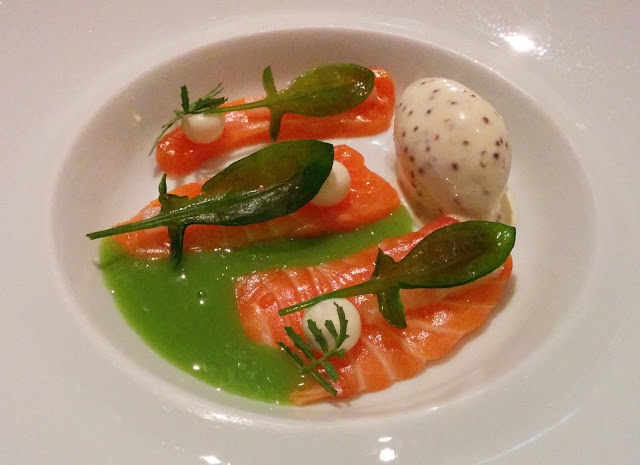 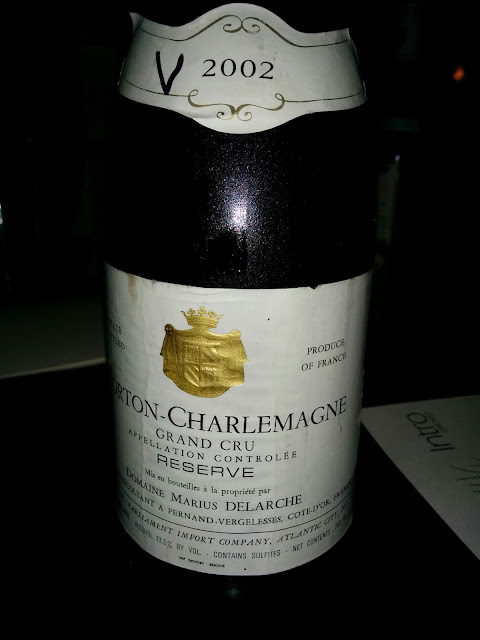 this was the wine of the evening - even though it was the back up (extra bottle) that we opened because Beth and I were having the substitute fish course for the lamb... 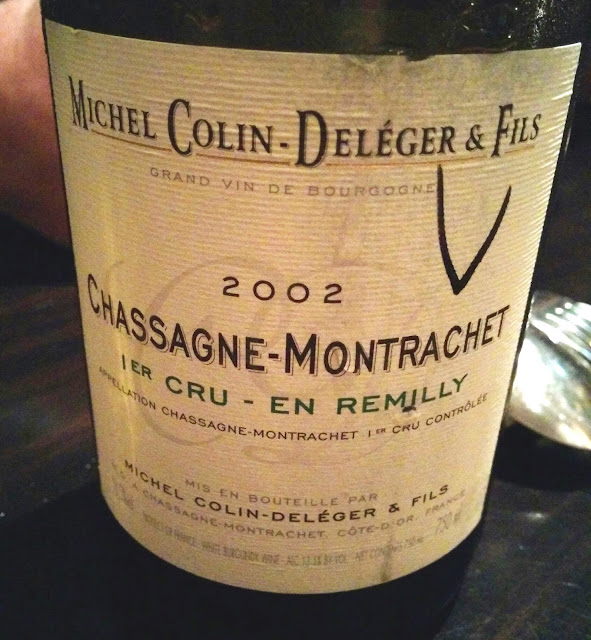 This could be one of my favorites - the mussels course- 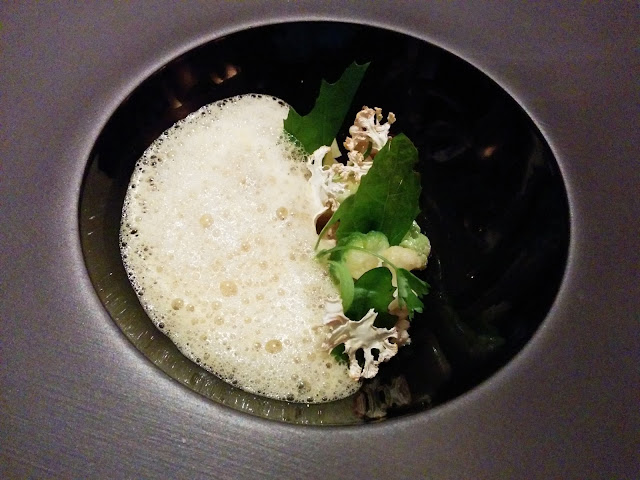 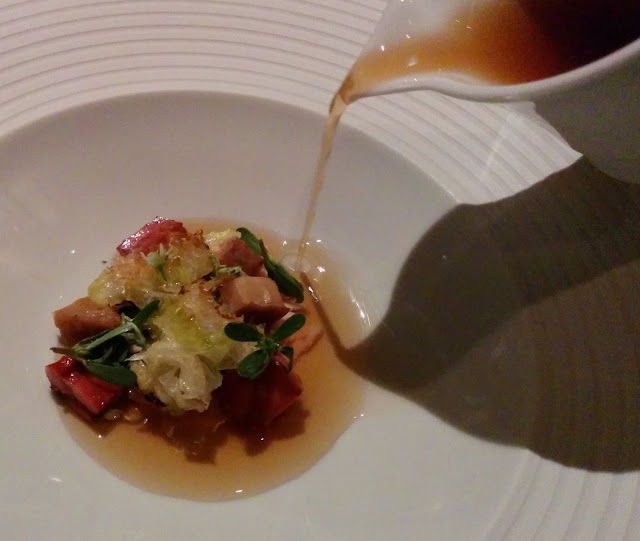 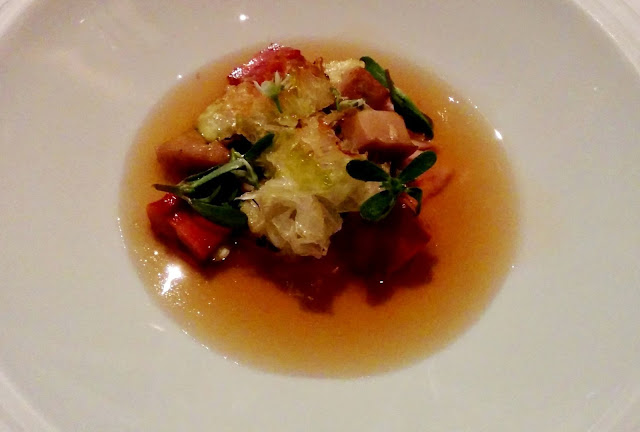 the abalone (poached in butter) was fabulous! 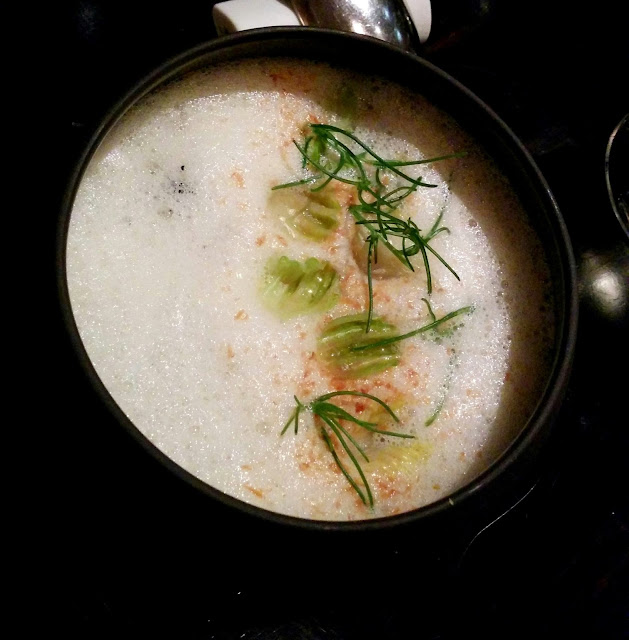 this 1970 Bordeaux was raisiny on the nose - kind of like a Madeira (cooked) but had wonderful fruit forward on the palate that was exquisite before it died in the glass - like many a terrific old old Bordeaux- so giving when first opened - they just don't last too long... this 45 year old I ranked as #2 wine of the evening.... while it was still living - it was amazing! 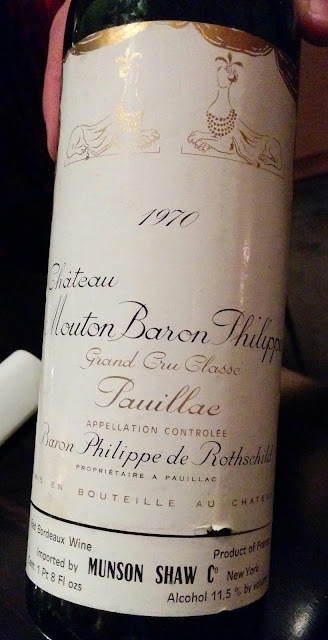 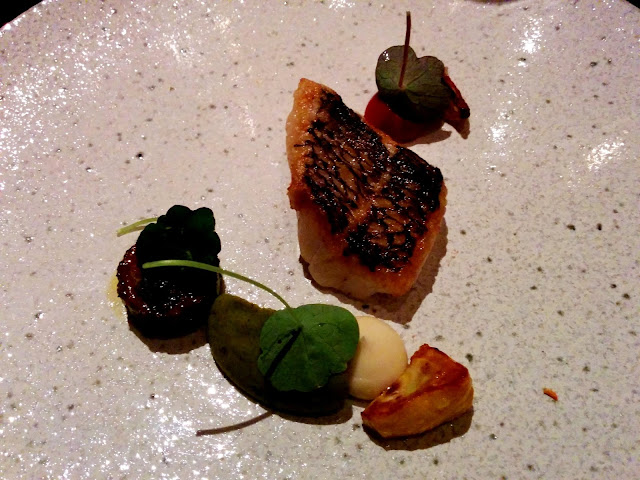 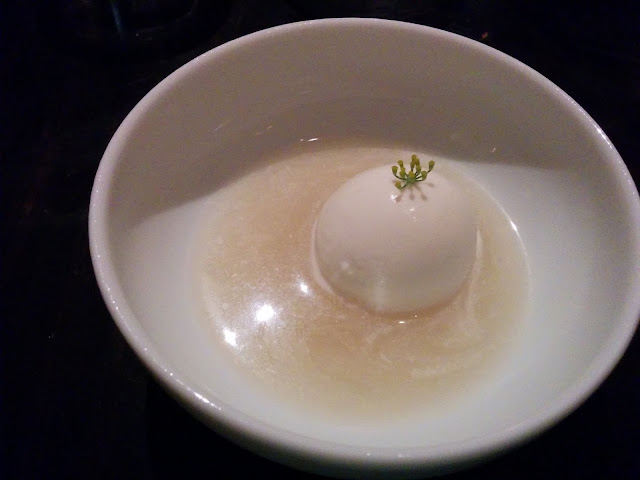 our dessert wine from the year Mon & Beth met! 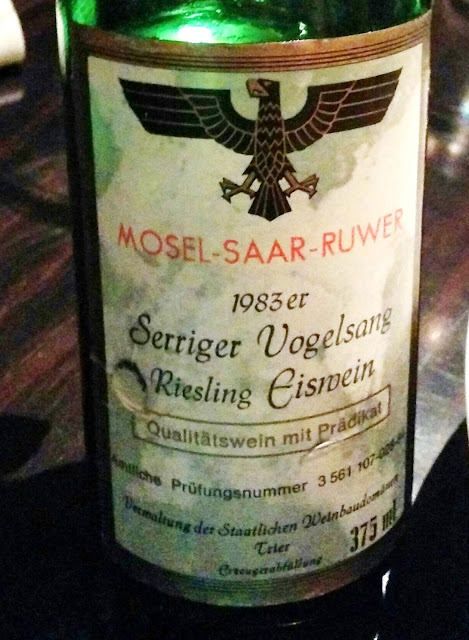 another of my very favorite dishes - the kale like greens are actually sponge cake - tasty with terrific texture... 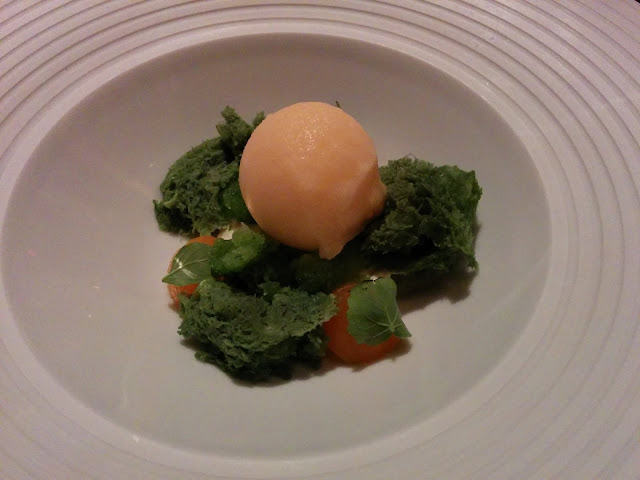 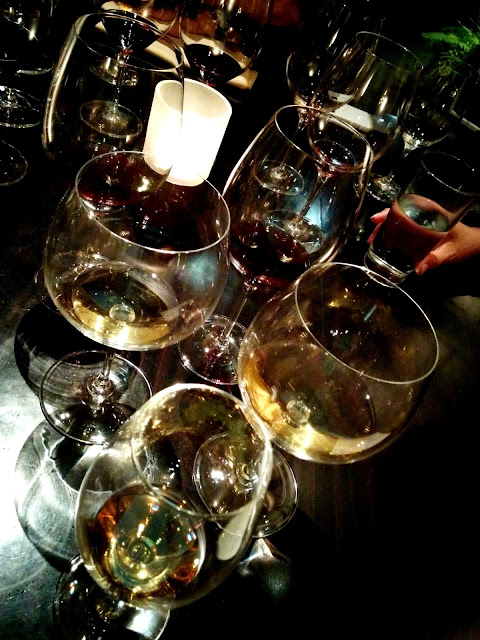 the aquarium in the WC... a nice touch  LOL 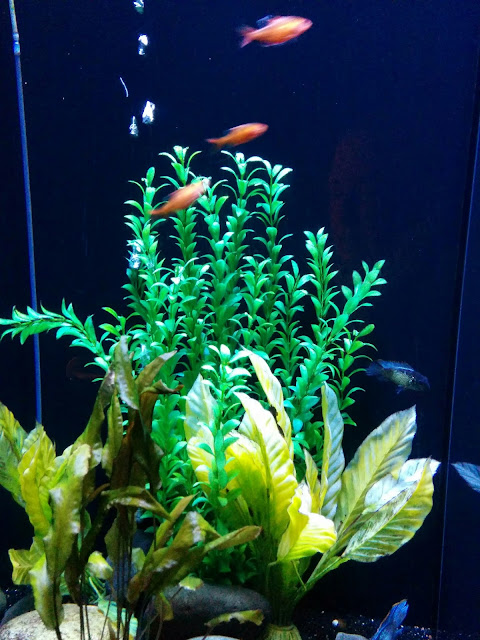 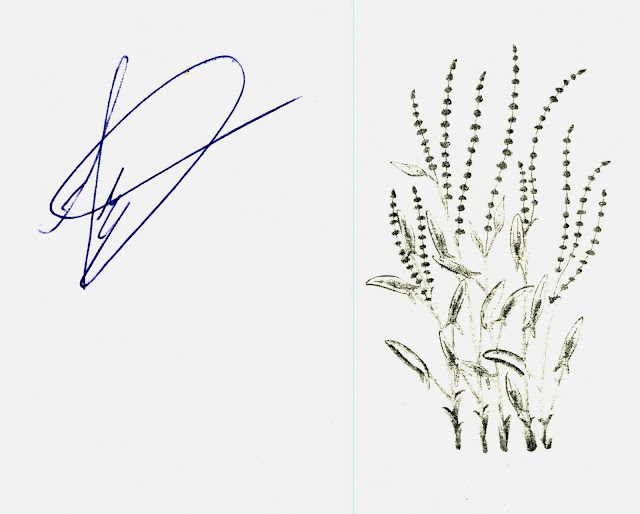 And the finale was a orange chocolate truffle - a bite of intense flavor to end an outstanding meal! 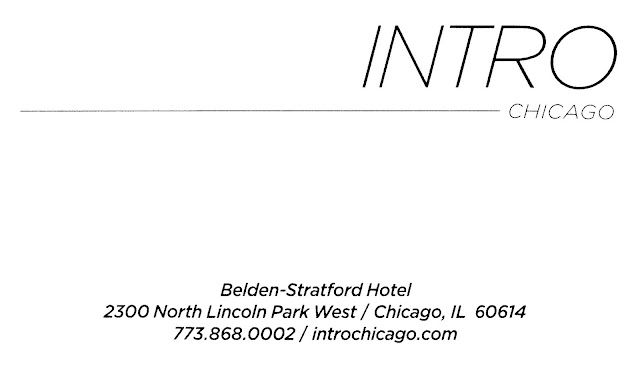 Tonight Mick and I are headed to Miss Buncle's book- while Phil heads off to Folkstage at WFMT... then it's time to get serious about packing for the trip - and Phil had a Sunday concert - and we both have a food event on Monday night... before our Tuesday flight out... keep you posted....
Posted by TOR at 3:05 PM