where did June go?

OK so I know where it went-  it was a rhetorical question... First I went to Canada with TB my travel buddy of a couple of decades... then I came home and continued unpacking moving boxes and started our social season in Chicago with a Chaine des Rotisseurs dinner  Saw a NTLive play that was a complete farce and full of lots of laughs. We are about to have our first dinner party here at the new place (sans couches which won't arrive until some time next month) - Oh and the kids came for Father's Day to go to a Cubs game with Phil... in two days friends from Germany (Claus & Evi, their son Conrad, his wife Vroni and their baby Constantin) arrive and we will visit Saturday and Sunday--- then we are off to visit CBGB and again see/hear Jackson Browne at Interlochen in Michigan.  So that is June in a nutshell and now I am going backward in time in an attempt to catch up and get ready for a very busy July (three plays and several dinners scheduled already along with at least one more concert.)

We met John & Barb for an early dinner two days ago at El Nandu.  Hadn't been there in years - since a retirement party with my old department back in 2011... it is Argentinean and so we all had meat LOL - my skirt steak was excellent - Barb liked her Milanese and John had a steak, Phil the parrillada.  Then we zipped off to the theater to see an NTLive production of One Man Two Guvnors which was an updating (to 1963) of an old Goldoni farce from the Commedia dell'Arte.

We have loved NT Live in Sarasota which plays in the Historic Asolo theater but this was at a local cinema and not even a very nice one...dirty halls and sticky floors - the seats were comfy though!

Featuring a Tony Award-winning performance from host of the The Late Late Show, James Corden, the uproarious One Man, Two Guvnors was a runaway hit both in London’s West End and on Broadway.

Fired from his skiffle band, Francis Henshall becomes minder to Roscoe Crabbe, a small time East End hood, now in Brighton to collect £6,000 from his fiancée’s dad. But Roscoe is really his sister Rachel posing as her own dead brother, who’s been killed by her boyfriend Stanley Stubbers.

Holed up at The Cricketers’ Arms, the permanently ravenous Francis spots the chance of an extra meal ticket and takes a second job with one Stanley Stubbers, who is hiding from the police and waiting to be re-united with Rachel. To prevent discovery, Francis must keep his two guvnors apart.  Simple.

One Man, Two Guvnors is a play by Richard Bean, an English adaptation of Servant of Two Masters (Italian: Il servitore di due padroni), a 1743 Commedia dell'arte style comedy play by the Italian playwright Carlo Goldoni. The play replaces the Italian period setting of the original with Brighton in 1963. The play opened at the National Theatre in 2011. The London production closed in March 2014.

In 1960s Brighton, a socially naive Francis Henshall becomes separately employed by two men – Roscoe Crabbe, a local gangster, and Stanley Stubbers, an upper class criminal. Francis tries to keep the two from meeting, in order to avoid each of them learning that Francis is also working for someone else. However, it turns out that Roscoe is really Rachel Crabbe in disguise, her twin brother Roscoe having been killed by her lover, who is none other than Stanley Stubbers. Mixed in with these chaotic events is Pauline Clench who was originally meant to marry Roscoe but is now set to elope with over-the-top amateur actor Alan Dangle. The play includes two extended passages of improvisation where audience members are recruited into the play.

The play premiered at the National Theatre's Lyttelton Theatre; Nicholas Hytner directed James Corden in the starring role of Francis Henshall, with associate director Cal McCrystal responsible for the physical comedy. The play contains songs written by and performed by "The Craze", in a "skiffle band" style, led by Grant Olding. The music is written and composed by Grant Olding.

Cast: shown in photos below from the website for NTLive 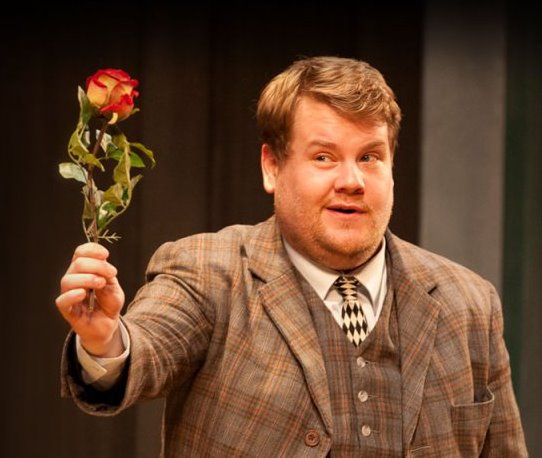 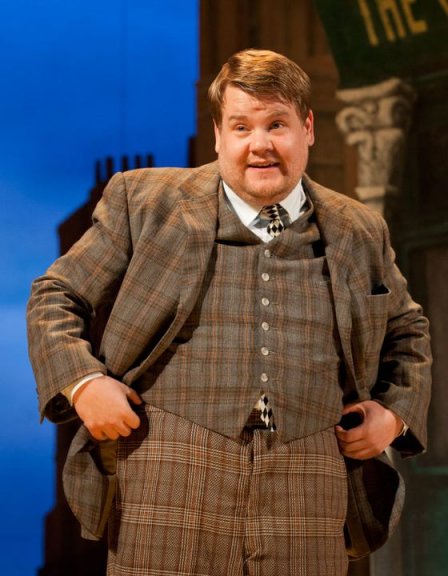 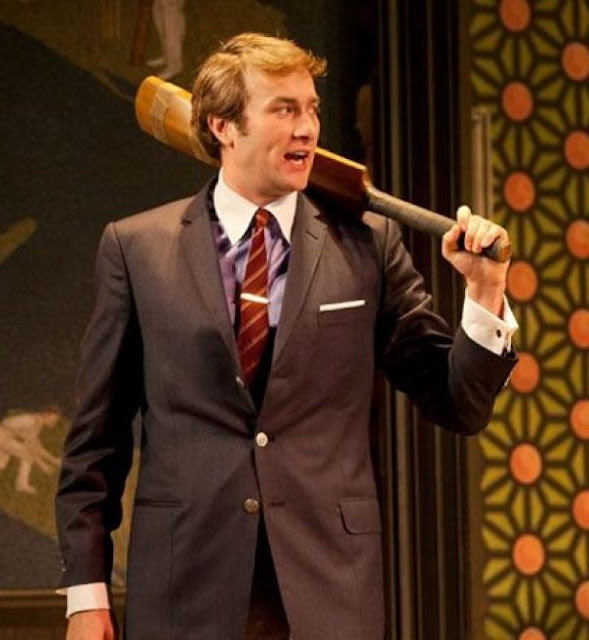 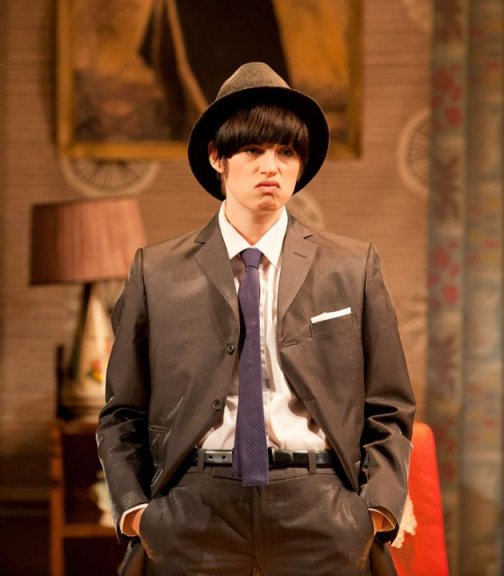 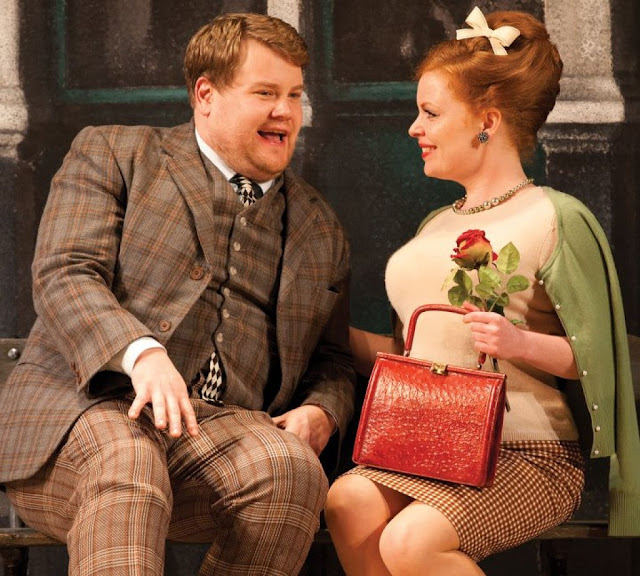 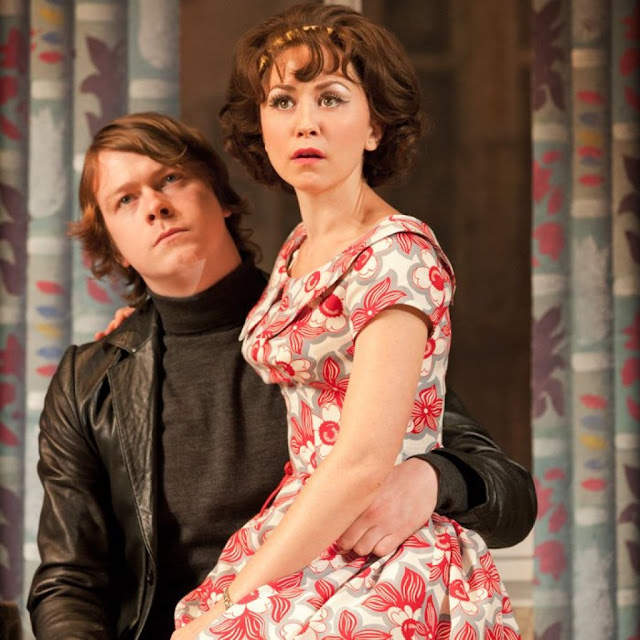 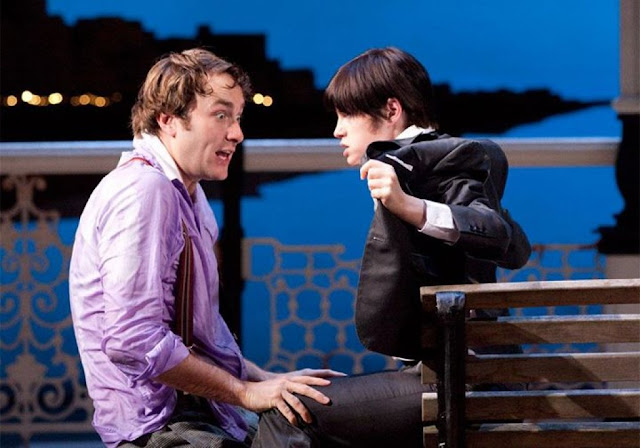 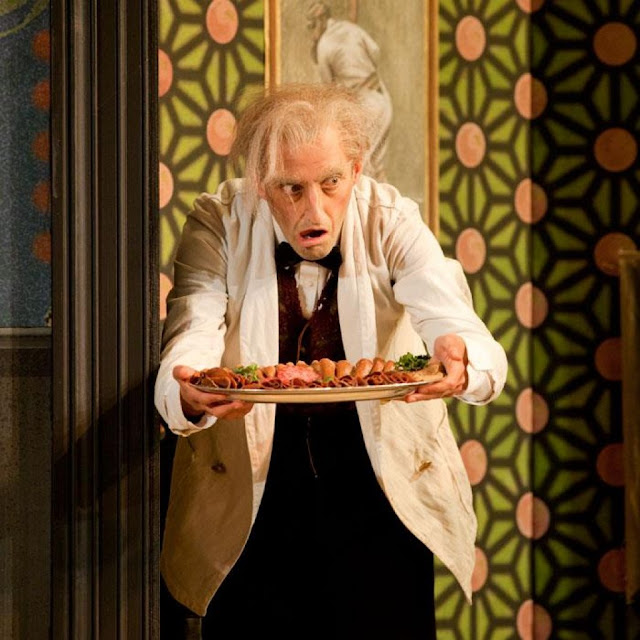 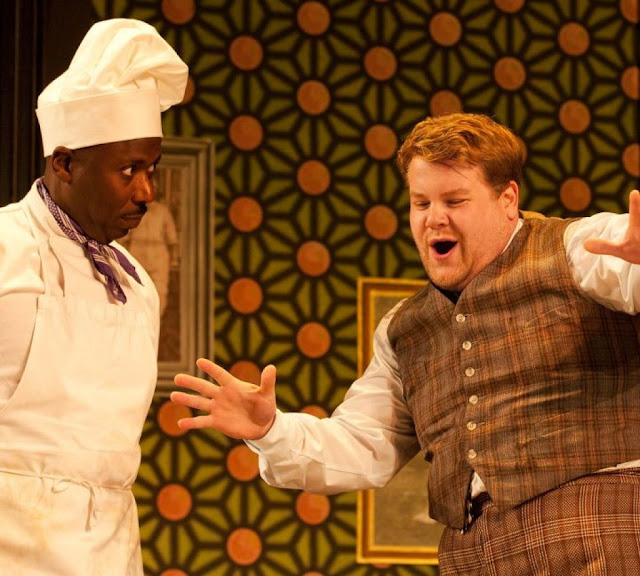 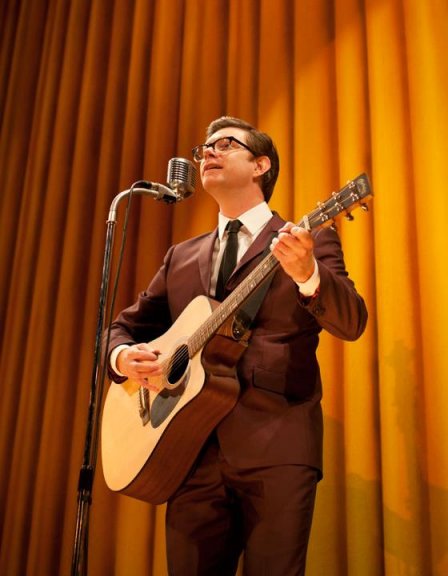 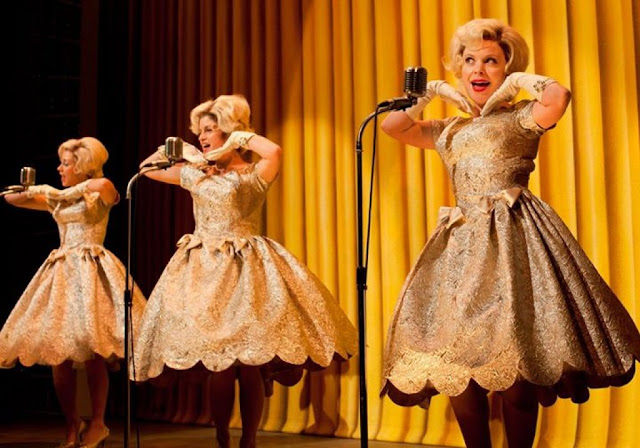 some of the physical comedy- the pinnacle of which was a fight with himself - literally! LOL

so many many laughs and there is still a chance to see it at the Siskel Theater 7/3 and also the Music Box 6/25 and at Northwestern 8/2....

next up the Chaine dinner from the night before!
Posted by TOR at 5:25 PM