so still working back from last night to earlier activities -

On Sunday afternoon Barb and I went to the ballet- and here is the blurb on what we saw performed:
The Sarasota Ballet presented Ashton, Graziano & Tuckett. Sir Frederick Ashton’s Valses nobles et sentimentales, a series of waltzes created in 1947 and lost until its revival in 1986, returned to the Sarasota stage. Valses celebrates Ravel’s ravishing, swooning score with its rich costumes and romantic choreography. Resident Choreographer Ricardo Graziano brought his 2014 Before Night Falls back by popular demand. The long-awaited return of Will Tuckett’s Changing Light, which received its world premiere with The Sarasota Ballet in 2013, closed the program. Inspired by Sarasota’s majestic sunsets, Changing Light brought audiences to their feet with its uplifting beauty and vitality.

Both the Graziano and the Tuckett ballets got standing ovations- they were absolutely magnificent.  I couldn't even say which I liked most- because they were both terrific and the dancers amazing!

the above from the finale of the Tuckett ballet - Changing Colors... 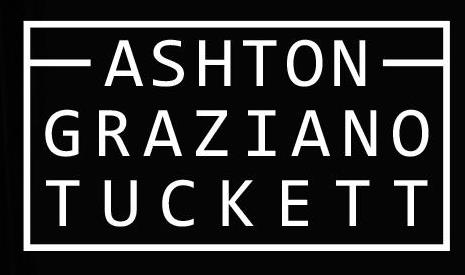 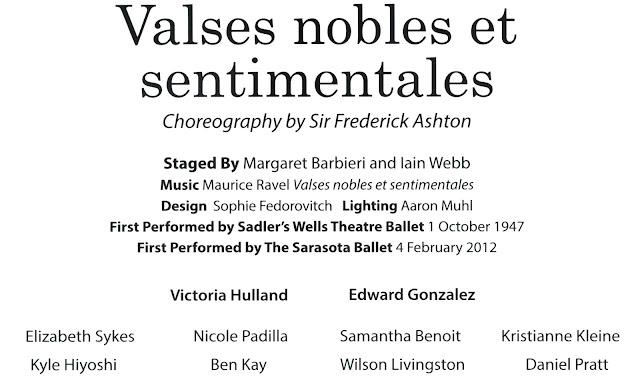 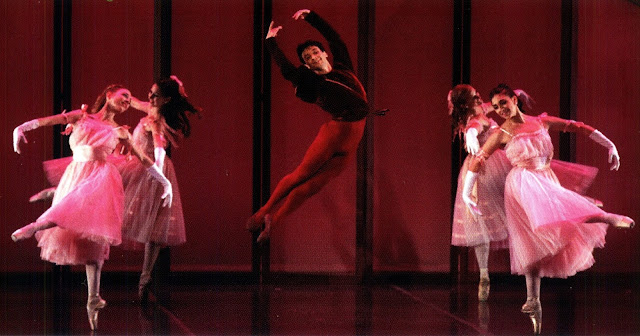 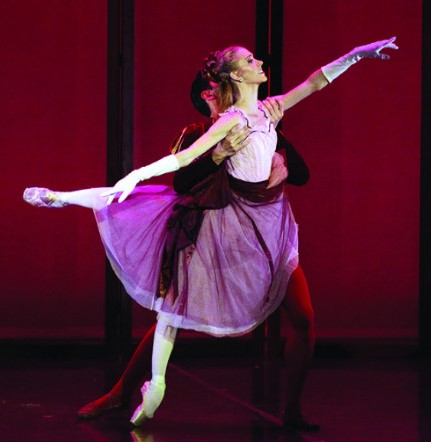 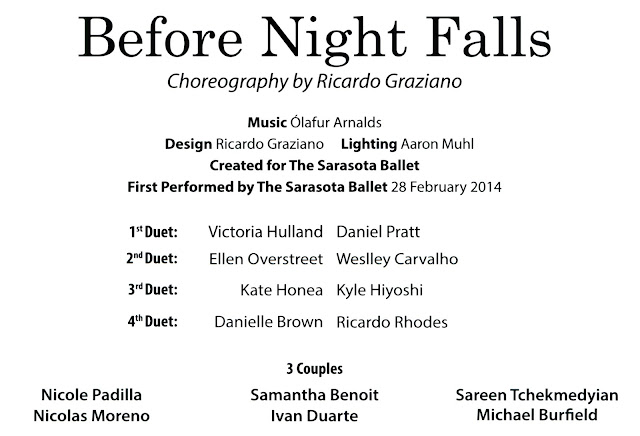 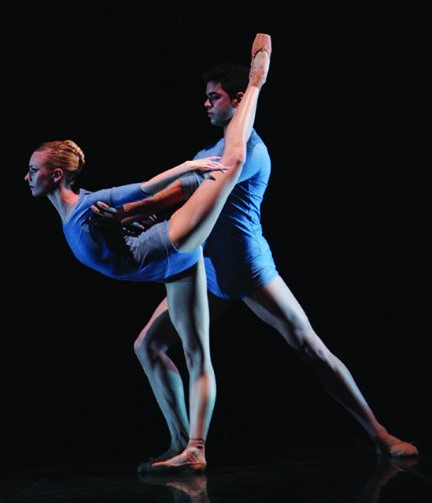 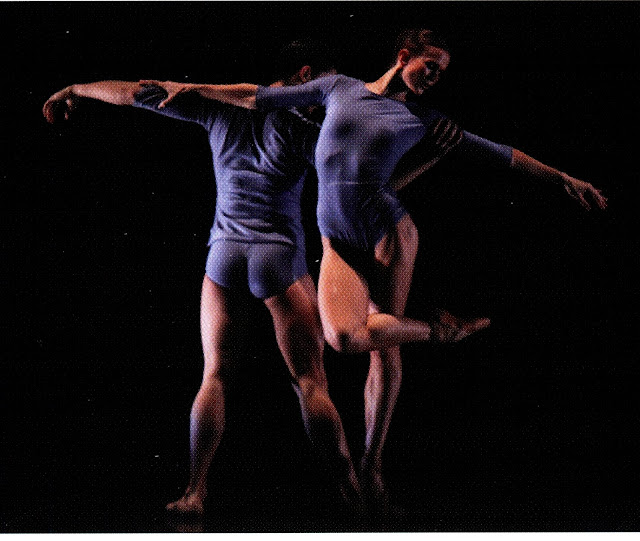 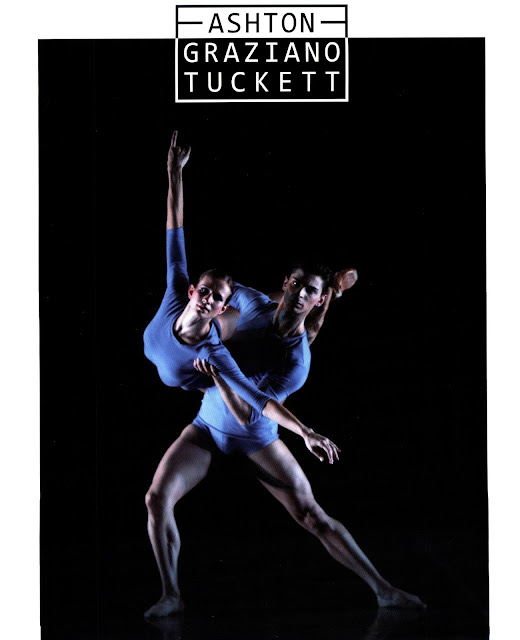 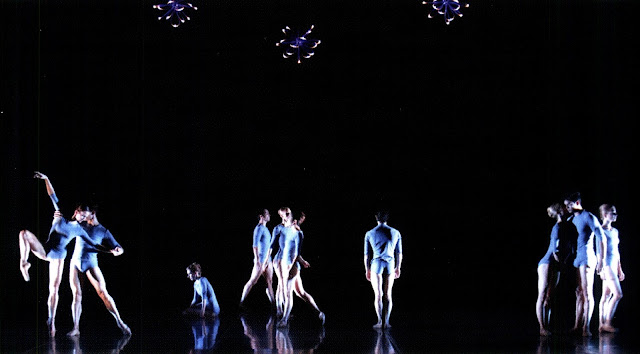 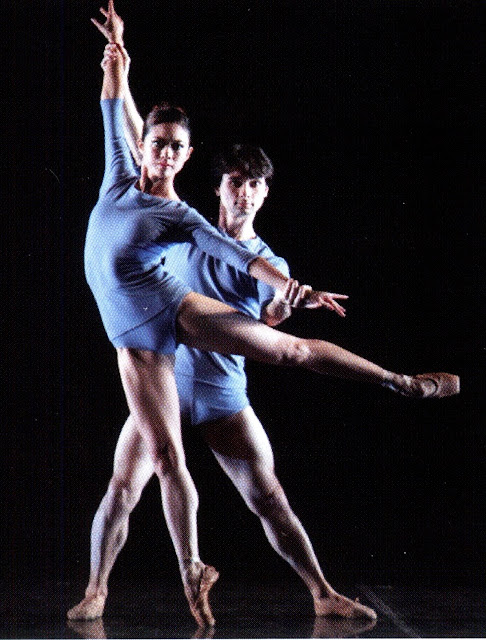 the music for the Graziano ballet Before Night Falls was very dramatic and haunting - worth finding it to listen... 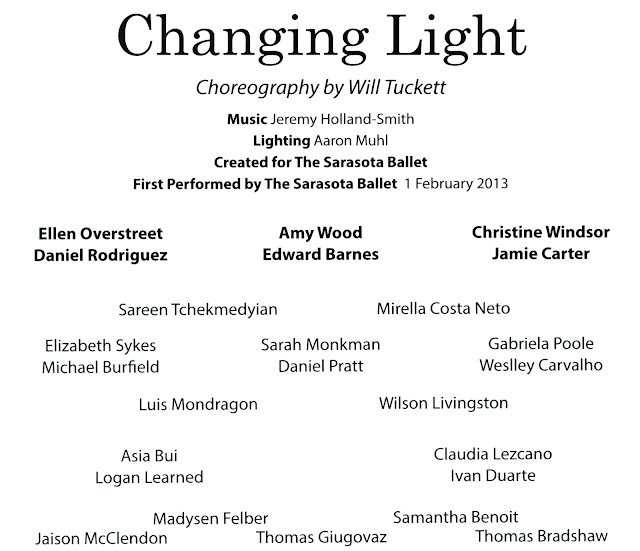 The ballet was sold out for all the regular performances and they added two more which also sold out!

here are some reviews- or excerpts from them-

"they have reached an entirely different level and they have outdone themselves! In fact, this weekend’s performance of the powerful line up of choreographers Ashton, Graziano, and Tuckett was transcendent...“Changing Light” by Will Tuckett was commissioned by Artistic Director Iain Webb for the Sarasota Ballet and was inspired by what Tuckett called “one of the most spectacular sights I have ever seen, the Sarasota sunset.” This place-based piece is an ideal way to highlight the specificity of the talents of this tremendous company who all live and work in Sarasota." 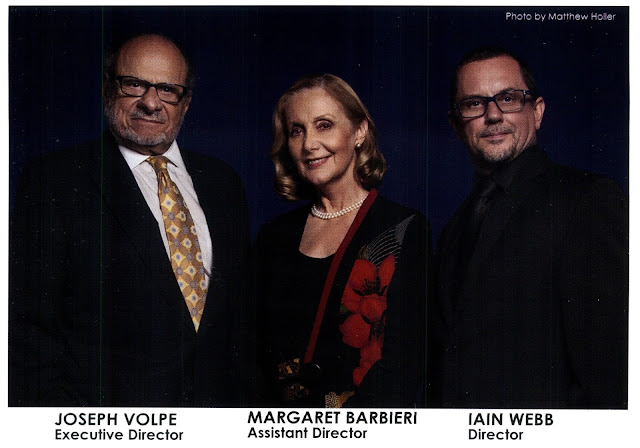 another review- from the local paper- (heavily edited due to length)

"Valses," the nearly-lost Ashton ballet from 1947 which director Iain Webb and his wife, assistant director Margaret Barbieri, painstakingly reconstructed from an archival film five years ago...Set in a roseate post-war ballroom, with costumes of tulle and velvet and three transparent screens to dance around and behind and danced to an elegant Maurice Ravel score, it's always been a "pretty" ballet to watch, full of deceptively difficult classical vocabulary that's meant to look as easy as skipping down a lane.

The program was originally to have included a new work by dancer and resident choreographer Graziano, but his ongoing injury derailed that possibility. No matter. I'd been looking forward to a reprise of "Before Night Falls" since the first (and only other) time the company performed it three years ago. A series of duets by four couples (another three that come together for ensembles at the beginning and end) set to a hypnotic score by Icelandic composer Olafur Arnalds, its focus is on partnering and relationship, though not literally so.  In barely there, dusky blue leotards, the couples seldom separate, each dancer reliant upon another as if for breath itself. Having recently seen Graziano's acclaimed "In a State of Weightlessness," I could recognize the birth of his signature style in this earlier work, which asks a lot of both the men (lots of lifting) and the women (you'd better be very flexible). But as impressive as the athletic moves and melting transitions, is Graziano's musical interpretation, which packs an emotional punch into every step. The final pose, with Wood reaching for the glowing globular helixes that descended from above while impossibly "kneeling" on Gonzalez' chest, had an almost religious feel. And the thunderous applause that followed had a genuineness and spontaneity.

The reprise of Tuckett's "Changing Light," an abstract work the British choreographer created for the company in 2013, was elating in a different way. Full of exuberance, joy and streaks of color in the simple orange (principals) and blue (secondaries) ombre costuming representing the Bay area sunset that inspired the piece, it is set to an expansive score by Tuckett's friend and colleague, Jeremy Holland-Smith that reminds me of Aaron Copland's best.  There's no story here - it's pure dance at its finest. ...there's also something kind of wonderful about seeing such a cluster of energy contained without a collision.

In a program largely devoid of backdrops, sets or elaborate costuming, the tone set by the lightning is of magnified importance. So special kudos go to the often-unheralded Aaron Muhl, who subtly provided just the right ambience for all three ballets, ensuring this evening of visual delights came off at its best.

Really - to my mind perhaps the best two performances I have seen since the Graziano choreographed In a State of Weightlessness.... which was simply breathtaking! - so a wonderful way to start off the day which ended late into the evening with the trip from arts & eats part 1.... but there was more to the weekend - which I will detail in a third post to ensure we get it all in LOL... stay tuned!
Posted by TOR at 12:20 PM