Last year I took a class at Lifelong Learning Academy on Asian mysteries- we read six of them and while I didn't love every one of the books I did like the teacher very much. So when I saw she was teaching a course on Appreciating Chinese Art this term I signed up immediately.

We started with an exploration of a painting that is known as the Chinese "Mona Lisa" and she asked us to describe what we thought the painting would look like.... so first we made a lists of the things that were special about the Mona Lisa and then we made a list of characteristics of what a Chinese Mona Lisa might be like.

She told us a story of having seen this painting on exhibition while visiting Hong Kong... a long line, timed entry and limited time with the actual painting.  She described her experience as being so rushed and crowded that it wasn't pleasant (like trying to see the Mona Lisa LOL) but they did give her a small reproduction of the painting as a memento of the visit.

And after we made our list she passed around her souvenir copy of the painting.  And we all laughed...

Along the River During the Qingming Festival - Painting by Zhang Zeduan

from- wikipedia:
Along the River During the Qingming Festival, also known by its Chinese name as the Qingming Shanghe Tu, is a painting by the Song dynasty artist Zhang Zeduan (1085–1145). It captures the daily life of people and the landscape of the capital, Bianjing (present-day Kaifeng) during the Northern Song. The theme is often said to celebrate the festive spirit and worldly commotion at the Qingming Festival, rather than the holiday's ceremonial aspects, such as tomb sweeping and prayers. Successive scenes reveal the lifestyle of all levels of the society from rich to poor as well as different economic activities in rural areas and the city, and offer glimpses of period clothing and architecture. The painting is considered to be the most renowned work among all Chinese paintings, and it has been called "China's Mona Lisa."

As an artistic creation, the piece has been revered and court artists of subsequent dynasties made re-interpretive versions, each following the overall composition and the theme of the original but differing in details and technique. Over the centuries, the Qingming scroll was collected and kept among numerous private owners, before it eventually returned to public ownership. The painting was a particular favorite of Puyi, the Last Emperor, who took the Song dynasty original with him when he left Beijing. It was re-purchased in 1945 and kept at the Palace Museum in the Forbidden City. The Song dynasty original and the Qing versions, in the Beijing and Taipei Palace Museums respectively, are regarded as national treasures and are exhibited only for brief periods every few years

The Song original scroll is 10 inches tall and 17 feet 3 inches long. In its length there are 814 humans, 28 boats, 60 animals, 30 buildings, 20 vehicles, 8 sedan chairs, and 170 trees. Only about twenty women appear in the Song dynasty original, and only women of low social rank are visible out of doors unless accompanied by men.  The countryside and the densely populated city are the two main sections in the picture, with the river meandering through the entire length. The right section is the rural area of the city. There are crop fields and unhurried rural folk—predominately farmers, goatherds, and pig herders—in bucolic scenery.

A country path broadens into a road and joins with the city road. The left half is the urban area, which eventually leads into the city proper with the gates. Many economic activities, such as people loading cargoes onto the boat, shops, and even a tax office, can be seen in this area. People from all walks of life are depicted: peddlers, jugglers, actors, paupers begging, monks asking for alms, fortune tellers and seers, doctors, innkeepers, teachers, millers, metalworkers, carpenters, masons, and official scholars from all ranks.

The bridge scene where the crew of an oncoming boat have not yet fully lowered their sails and are in danger of crashing into the bridge. Outside the city proper (separated by the gate to the left), there are businesses of all kinds, selling wine, grain, secondhand goods, cookware, bows and arrows, lanterns, musical instruments, gold and silver, ornaments, dyed fabrics, paintings, medicine, needles, and artifacts, as well as many restaurants. The vendors extend all along the great bridge, called the Rainbow Bridge or, more rarely, the Shangtu Bridge.

Where the great bridge crosses the river is the center and main focus of the scroll. A great commotion animates the people on the bridge. A boat approaches at an awkward angle with its mast not completely lowered, threatening to crash into the bridge. The crowds on the bridge and along the riverside are shouting and gesturing toward the boat. Someone near the apex of the bridge lowers a rope to the outstretched arms of the crew below. In addition to the shops and diners, there are inns, temples, private residences, and official buildings varying in grandeur and style, from huts to mansions with grand front- and backyards.

People and commodities are transported by various modes: wheeled wagons, beasts of labor (in particular, a large number of donkeys and mules), sedan chairs, and chariots. The river is packed with fishing boats and passenger-carrying ferries, with men at the river bank, pulling the larger ships.

Many of these details are roughly corroborated by Song dynasty writings, principally the Dongjing Meng Hua Lu, which describes many of the same features of life in the capital.

It is quite the painting! And obviously the emphasis on the culture and society of all versus the focus on an individual is one of the most striking differences between the Western Mona Lisa and the Chinese Mona Lisa :-)

many detailed photos exist if you want to check them out- but here are a couple - one of the palace and one of the central bridge in the town... 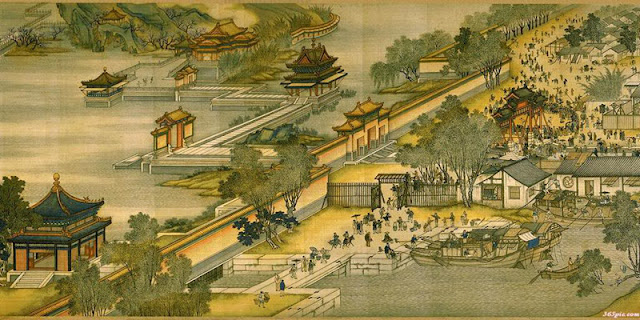 a really fun class - we saw many later versions of the subject matter- each had its own take on the classic...

for our next class we did Religious Art and the focus was on the Dunhuang Cave of 1,000 Buddhas...

We learned about the difference between Buddhas and Bodhisattvas and Apsaras - and saw some amazing things from the temple caves which are located along the ancient Silk Route.

The caves were carved by hand starting 1,700 years ago.  From the 4th to the 14th century, hundreds of caves were painstakingly hand carved out of the alluvial conglomerate rock cliff face, under the sponsorship of Buddhist monks, local officials, and wealthy families who wished to build karmic merit and perform an act of veneration. Nearly 500 of the elaborately decorated caves remain today.

They contain the world’s largest collection of Buddhist art.  The decorated caves’ walls and ceilings, totaling close to 500,000 square feet, are covered by elaborate paintings depicting stories of the Buddha, Buddhist sutras, portraits of cave donors, ornamental designs, and scenes of social and commercial life. The caves also contain more than 2,000 brightly painted clay sculptures of the Buddha and other figures, the largest sculpture being over 100 feet tall.

“Caves of the Thousand Buddhas”  According to legend, in 366 C.E. a monk named Yuezun had a vision of a thousand radiant Buddhas on the cliff face, which inspired him to begin excavating the caves. Today there are many more than a thousand painted and sculpted Buddhas within the caves.

The caves were carved by hand starting 1,700 years ago. From the 4th to the 14th century, hundreds of caves were painstakingly hand carved out of the alluvial conglomerate rock cliff face, under the sponsorship of Buddhist monks, local officials, and wealthy families who wished to build karmic merit and perform an act of veneration. Nearly 500 of the elaborately decorated caves remain today.

The world’s earliest printed dated book was discovered there. The Diamond Sutra, the earliest and complete printed book with an attested date (868), is among the most notable documents found in the Library Cave. Using carved wooden blocks, the book was printed onto strips of paper that were then pasted together to form a scroll. The text is a Chinese translation from Sanskrit of a highly regarded Buddhist sutra, and is now part of the collection of the British Library.

The caves’ remote location helped them survive.  Despite their great age, the sculptures and wall paintings in the Dunhuang caves remain remarkably well preserved, thanks in part to the dry desert climate and their remote location. 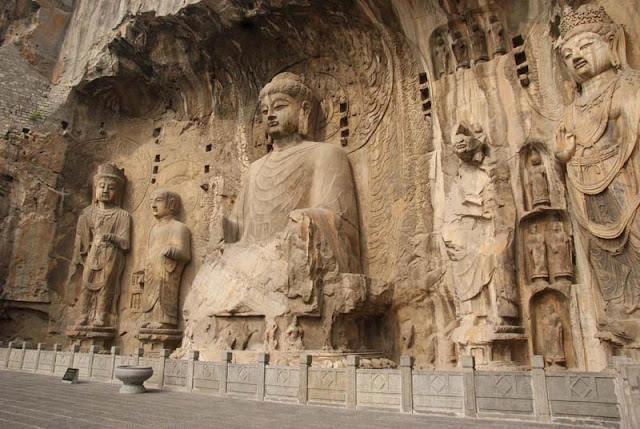 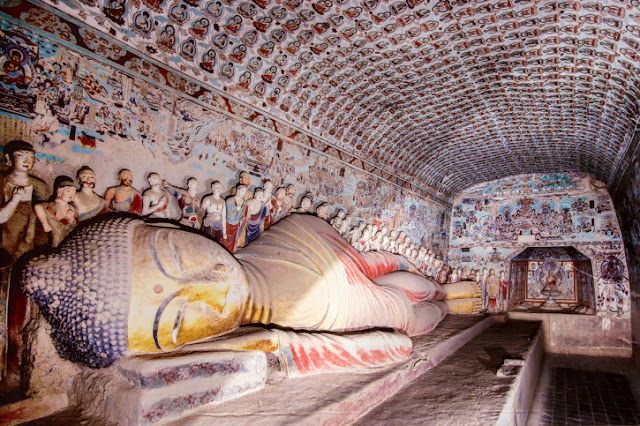 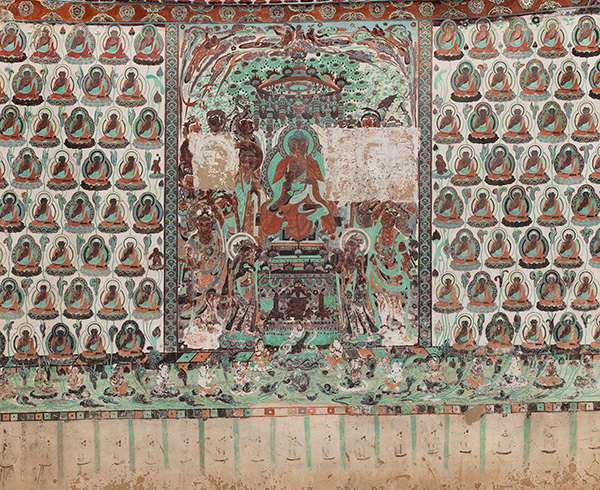 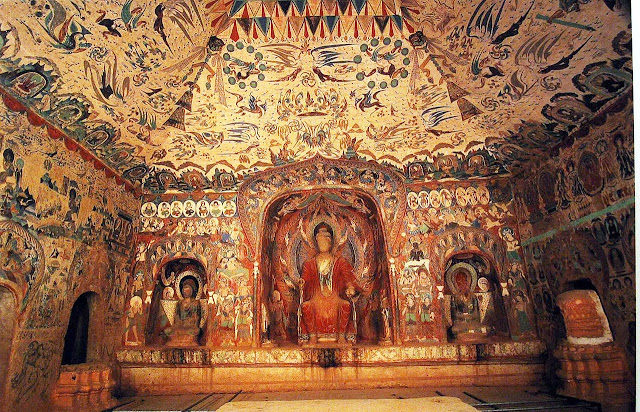 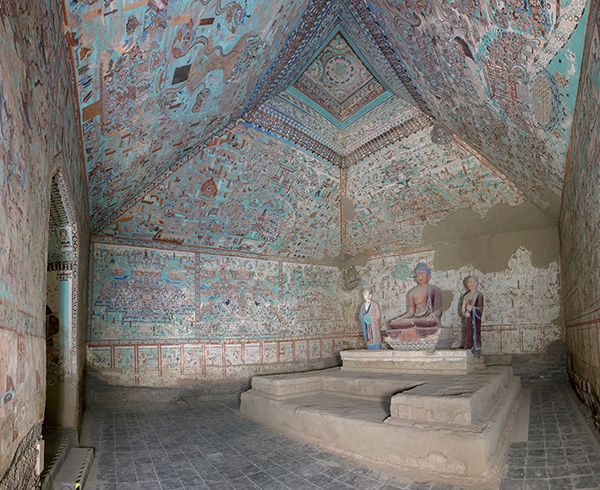 so two good classes and up next were ceramics and then current Chinese art trends... a terrific class with a lot of information that was new to me... never having studied Chinese art - despite being an Art History minor in college (think of the western - center of the universe perspective and you will figure out that we focused more on those works than any from the East...)

so stay tuned for more Chinese Art info and then a beginning of the skyscraper materials for my regular university class... don't want you to feel left out LOL...
Posted by TOR at 1:14 PM