the third ballet of the season was mid December and held at my least favorite venue- the Van Wezel Auditorium...however the performances more than made up for the distaste i have for Van Wezel.... 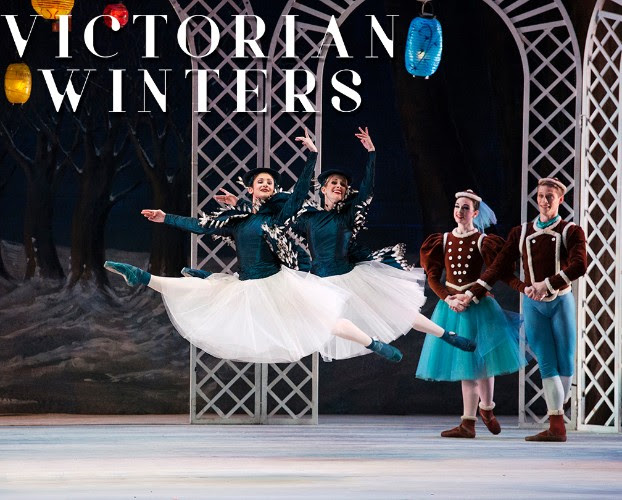 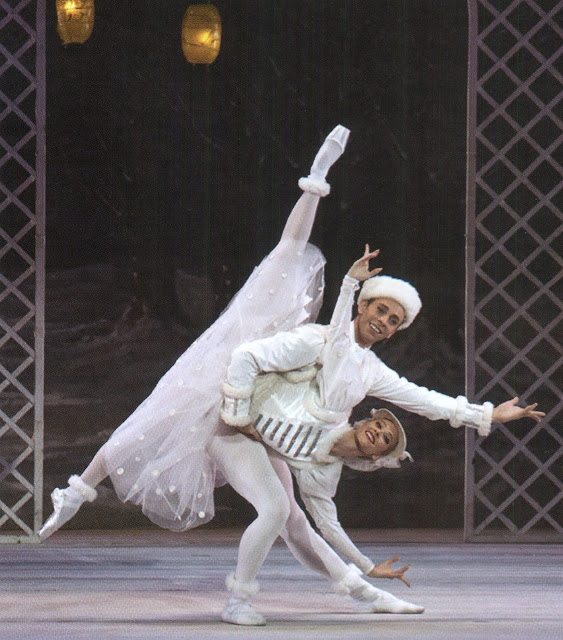 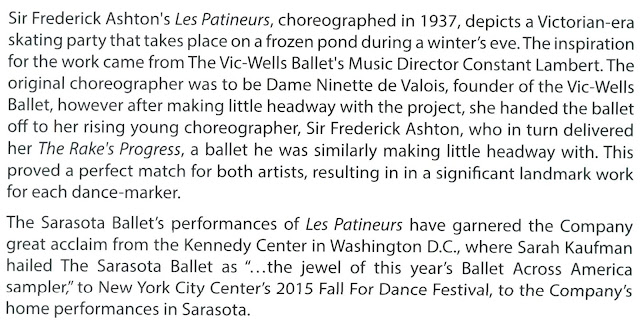 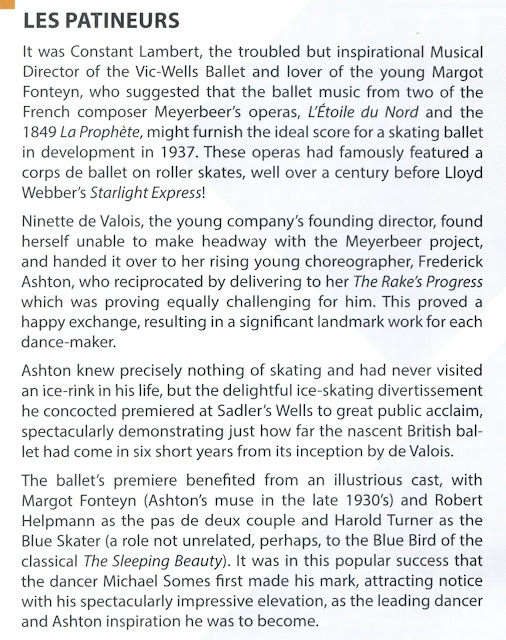 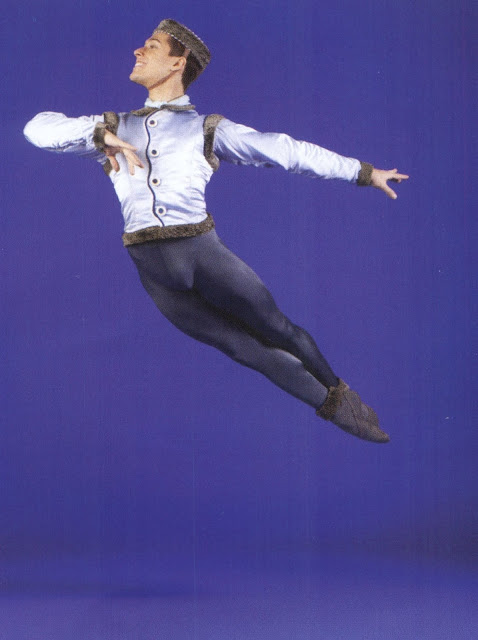 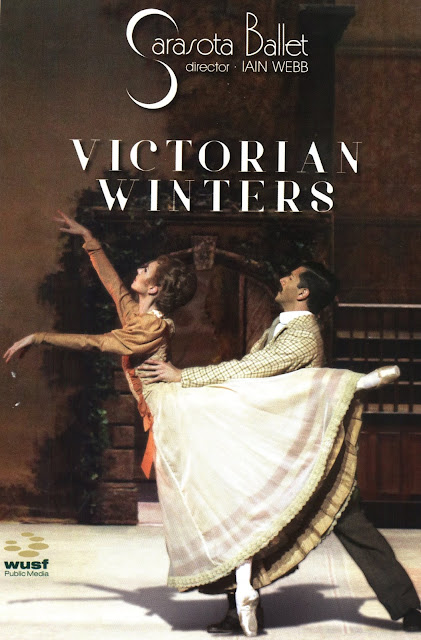 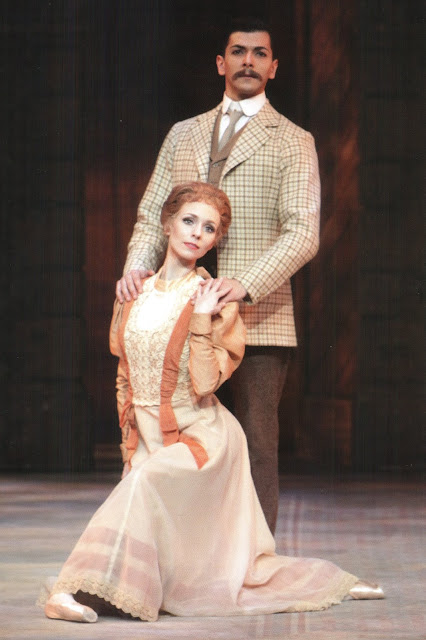 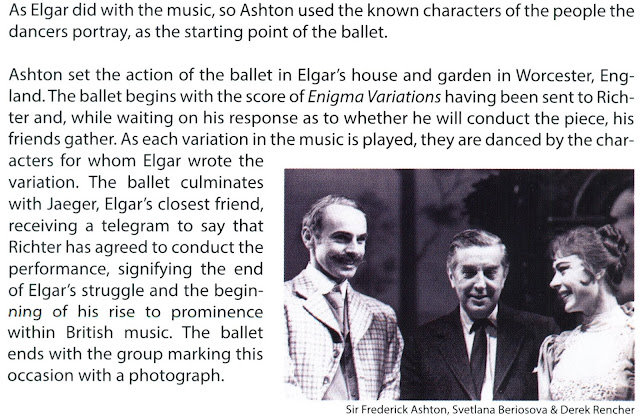 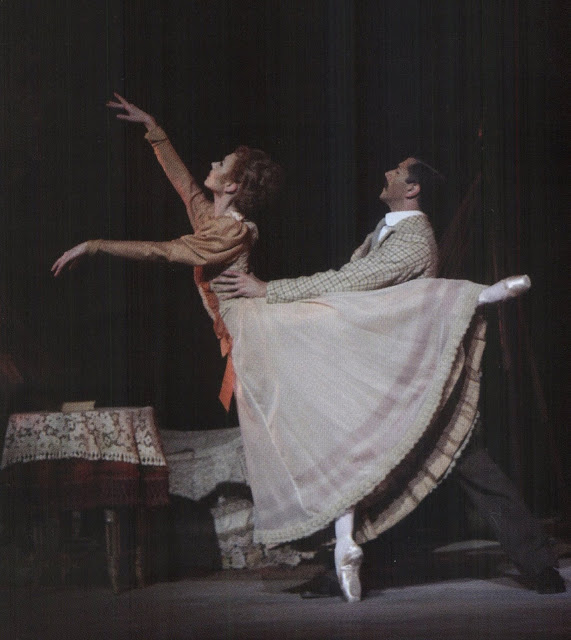 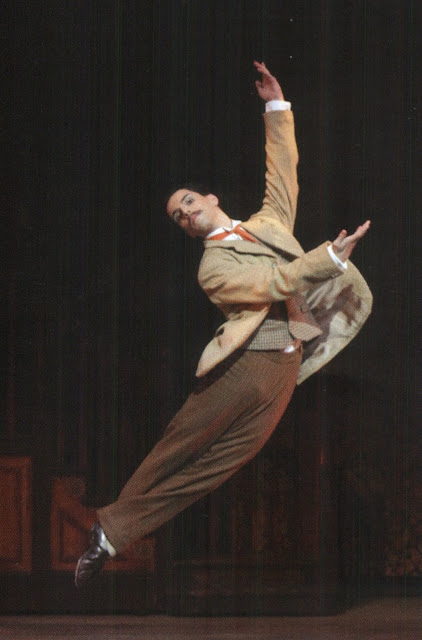 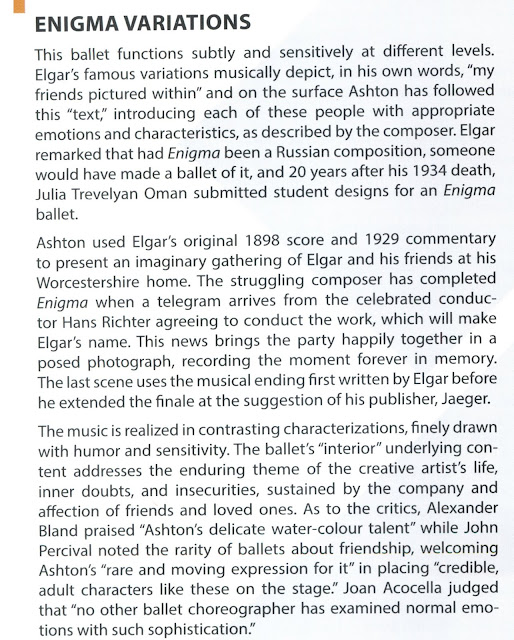 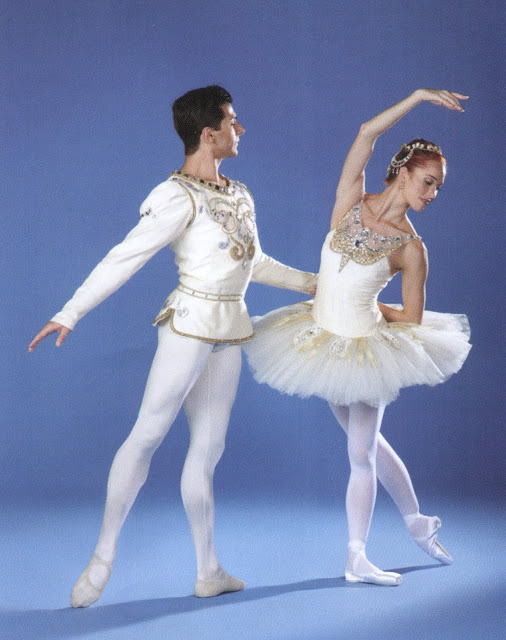 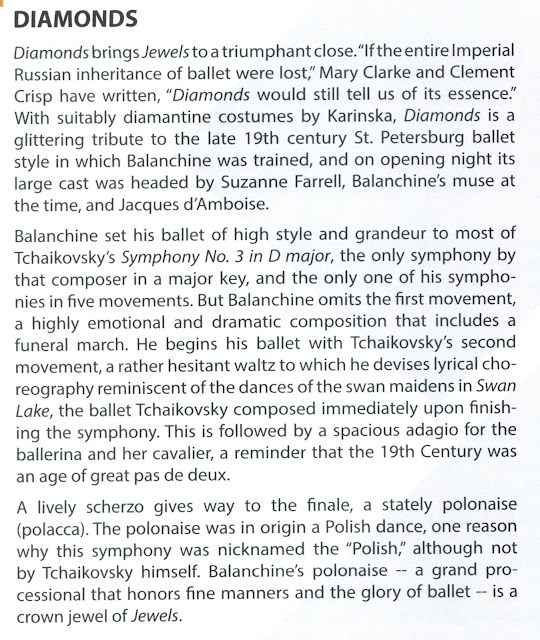 My preferences were the order in which they performed these ballets- loving the first and its amazing "skating" dances- especially the incredible moves of the blue boy... the Enigma variations were very good and although I am sure the Diamonds choreography is wonderful it left me as cold as a diamond- and I did not think it was as perfectly performed as it should be...even in this publicity photo you can see some arms in a U shape more than a circle--- this one truly needs perfection and when the movements are done in synchronization the slightest variation stands out like a sore thumb to me...

however- the critic - whose judgment I respect completely - was happy with it...here is Carrie Seidman's review-

Looking back on a decade of progress for Sarasota Ballet

The ‘Victorian Winters’ program of Ashton and Balanchine reflects company’s evolution and growth. The Sarasota Ballet’s third program of the season, “Victorian Winters,” is a triple bill of works previously performed, each one significant in the company’s history over the past decade under director Iain Webb.

“Les Patineurs” was the ballet that staked Sarasota’s claim to the works of British choreographer Frederick Ashton, more than two dozen of which are now in the repertoire; “Enigma Variations,” also by Ashton, had never been performed outside England when it premiered here in 2016, solidifying the company’s reputation for reviving historic, seldom-seen, ballets; and George Balanchine’s “Diamonds,” the finale of his full-length “Jewels,” was the piece the Sarasota performed in 2011 with the Suzanne Farrell Ballet in Washington, D.C., the first of what has now become an annual handful of performances out of state.

Due to a scheduling conflict that required my being out of town for all three of the weekend’s performances at the Van Wezel Performing Arts Hall, I was permitted to view the dress/tech rehearsal, watching (with a few exceptions) the cast that will perform Saturday evening. As someone who has been reviewing the company for the past eight years, there were plenty of déjà vu moments recalling those earlier performances and the dancers — many of them no longer with the company — who performed them.

“Les Patineurs,” choreographed in 1937, debuted in Sarasota in 2008, before my arrival in town. But I was watching in 2011, the night former principal Logan Learned was elevated to principal status after taking ownership of the “Blue Boy” role; and in 2013 at “Ballet Across America” in Washington, D.C., after which New York Times’ critic Alastair Macaulay called it “the finest I’ve seen of this ballet in over 30 years”; and again the following year for the company’s Big Apple debut at New York’s City Center.

Ashton’s accurate interpretation of a Victorian-era skating party (though he’d never visited an ice rink in his life), to music by Giacomo Meyerbeer, is a perpetual crowd pleaser, featuring an elaborate backdrop, period costuming, falling snowflakes and a special floor covering designed to look like ice. The look was a bit different this time because instead of borrowing the sets and costuming from the Birmingham Royal Ballet as in the past, the company recently purchased a little-used production created by Miami City Ballet. Though they aren’t vastly different, those who’ve seen the ballet in the past may note some differences (like the vivid scarlet costuming of the “Red Girls”) and I missed the aura of history that came with the more dated-looking costumes, bearing the sweat of a generation of dancers past.

But the biggest difference for Sarasota viewers will be the absence of Learned, who retired at the end of last season. “Blue Boy,” with its acrobatic solos and quirky head wiggles, had become the diminutive dancer’s signature work and his cadre of loyal local fans will claim no one could do the role as well. But they would be mistaken.

Ivan Duarte, coming off an injury that has kept him out of the first two programs of the season, has the precise and proficient footwork Learned lacked and even more leaping and turning facility. (He also possesses that impressive ability to finish a rapid pirouette sequence with a moment of still suspension on demi-pointe.) His final and endless turns, with one leg a la seconde (extended to the side), as the curtain falls, rises and falls again, were the speediest I’ve ever seen.

Victoria Hulland, replacing Danielle Brown as half of the lead “White Couple” with Jamie Carter, made a more reserved impression; Katelyn May joined Kate Honea as the spirited “Blue Girls,” filling in for the much-missed Nicole Padilla; and the corps was a mix of old and new faces. But the company’s comfortable ease with this now-familiar work remained, and the longer-tenured dancers were evidence of a mature understanding of Ashton’s choreography.

The Sarasota Ballet is the only company given permission to perform Ashton’s “Enigma Variations” outside the Royal Ballet and the Birmingham Royal Ballet, the latter of which loaned the exquisite sets and Victorian-era costuming (Julia Trevelyan Oman). Aron Muhl added a romantic aura with his recreation of Mark Jonathan’s original lighting.

Ashton’s series of character portraits based on the friends of composer Edward Elgar (to whose music of the same name the ballet is set) envisions an imaginary gathering of the melancholic Elgar, then a struggling composer, with his wife and friends at his Worcestershire home. Again, though the casting has shifted since the company gave the ballet its U.S. premiere in 2016, the Sarasota dancers evidenced a growing ease with its theatrical demands. Ricardo Graziano was in fine brooding and pensive form as Elgar, back after a season-long injury, with Hulland as his adoring wife; Thomas Giugovaz mastered the devilishly fast variation of Elgar’s friend, Arthur Troyte Griffith, and Daniel Pratt’s homoerotic moment as Nimrod, was appropriately understated.

Watching “Diamonds” brought me back to the moment when the company first performed the finale of Balanchine’s tryptich — inspired by his admiration of jewelry designer Claude Arpels and choreographed for his muse, Suzanne Farrel, to a grandiose Tchaikovsky score — in a combined performance on the tenth anniversary of Farrell’s own company in Washington, D.C. in 2011. (They performed it again later that season in Sarasota, with the D.C. company as guests.)

Back then I noted Danielle Brown (also returning this year after a season-long injury), dancing with Graziano, was “tentative, a princess hoping to prove herself.” The same duo was scheduled to perform opening night, no doubt with more maturity and greater ease, but I saw the Saturday night casting, with Ellen Overstreet and guest Marcelo Gomes, who, remarkably, has never before danced in this piece. (Gomes, who left American Ballet Theatre in 2017 after a #metoo accusation, was scheduled to dance in New York Friday night and fly to Sarasota in time for the final performance.)

Watching Gomes never grows old, though it won’t be long before he’s past prime for “white tights” roles. But in this case, I barely noticed him. He provided assured partnering in the very long pas de deux, but it was Overstreet I couldn’t tear my eyes from. Her absolute refusal to rush, extending each note of the music with fluid arm movement that continued to trail in one direction even as she moved on to the next step in another was breathtaking. The lush and languid quality of her movement turned her into an exotic yet regal creature, fragile and steely at once. Even during the very grand polonaise finale, with 34 dancers in dazzling rhinestoned costumes (on loan from National Ballet of Canada) filling the stage to capacity, she was the focal draw.

To be able to watch a reprise of these three works that helped make the company the respected entity it is today — and to see the changing cast of dancers continuing to grow and mature in both technical facility and emotional artistry — was a pleasure and testimony to the dedicated commitment of Webb and his wife, assistant director Margaret Barbieri, to putting Sarasota on the ballet map.

and from another article on the current performances- by thomas Becnel-

A miracle on ice’

Sarasota has earned a national reputation with the ballets of Ashton, including “Les Patineurs,” which features a skating party on a frozen pond.

In 2013, the dance critic of the Washington Post, Sarah Kaufman, raved about a Sarasota performance in a “Ballet Across America” program at the Kennedy Center. She called it “big-hearted” and “gorgeous,” marveling that Webb could do so much with such a small company and tiny budget.

“His achievement, and that of his dancers, is nothing short of miraculous,” Kaufman concluded. “Call ‘Les Patineurs’ a miracle on ice.”

This week, at the Van Wezel Performing Arts Hall, the ballet will be accompanied by the Sarasota Orchestra. It will be led by guest conductor Jonathon McPhee, former music director of the Boston Ballet.

On Saturday, the ballet will be joined by guest artist Marcelo Gomes, a former principal dancer with the American Ballet Theatre, who will dance the lead role in “Diamonds.”

Graziano will dance one of the leads in “Enigma” before returning to the stage for “Diamonds” on Friday and at the Saturday matinee. He’s not worried about pulling double duty, though he expects to break a sweat in his Victorian costume for “Enigma.”

so- now three ballet performances into the season I continue to be in awe of the quality of the company - as I always say "they are punching above their weight here" - this is an outstanding company with real talent and they deserve all the recognition they get and more..... 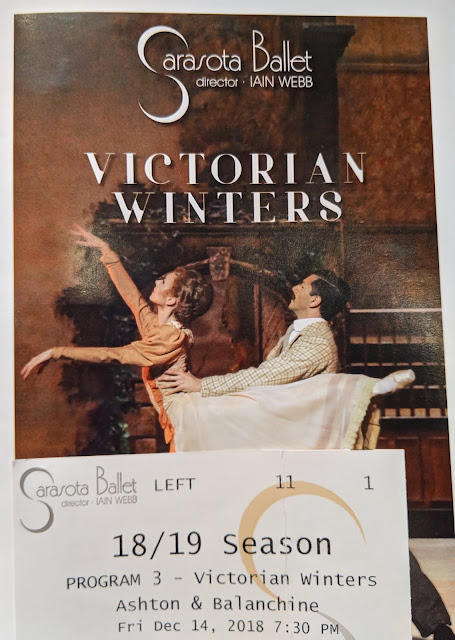