the second time around

Restaurants under the stress of a high volume holiday usually are not "themselves" - we often avoid places altogether on days when "everyone in the world" is out for dinner (think - Mother's Day for instance) and eat at home.  We also usually go out on weeknights as kitchens tend to be more stressed on Friday and Saturday nights. (LOL- in the parlance of the ancients- "date night")

However- friends come when it is convenient for their schedules so last night we found ourselves out on Valentine's Day for dinner.  Now there is a stress test for pretty much any restaurant but more so for those "special occasion" places like Louie's Modern where the normally high end food and service are put to the test by record breaking numbers of people seeking "that special meal" for their "valentine"- LOL.

So we were bowled over when they were able to not only keep up to their outstanding quality on there food - they were also able to keep up the level of warm, welcoming high quality service as well. It isn't a test to go on Wednesday night at 8:30 or 9:00  in a town that eats at 6:30 or 7:00 LOL.  But last night in an extremely busy restaurant we still had three terrific appetizers - the salt & pepper calamari, the black & blue pizzetta, and the seared tuna.  We had tried the last two before and they were both extremely well executed (as they were last time.) The flavors of the calamari were very good but it must have been delayed waiting for the other items because it was only moderately warm upon arrival at the table.  Given how busy the kitchen was - that wasn't unexpected and as I said it was delicious - just not HOT.

We tried all new entrees this time and everyone was very happy- we had the salmon, a scallop & clam dish over risotto, and a "gumbo" from John Besch's recipe.  Luke and August are two of our very favorite restaurants in NOLa so we had high expectations for that dish that were completely met and then exceeded.

here are photos of our entrees- 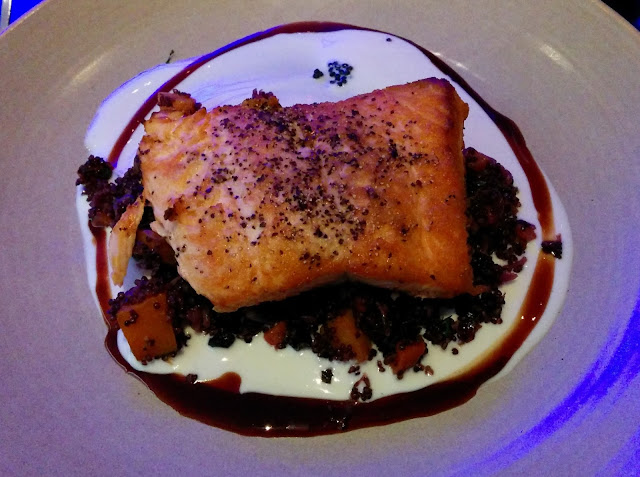 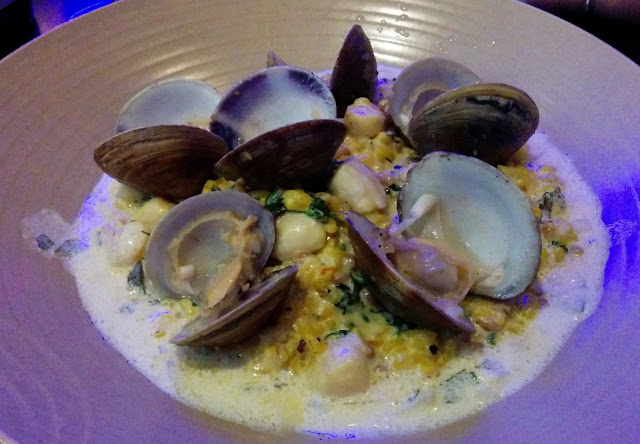 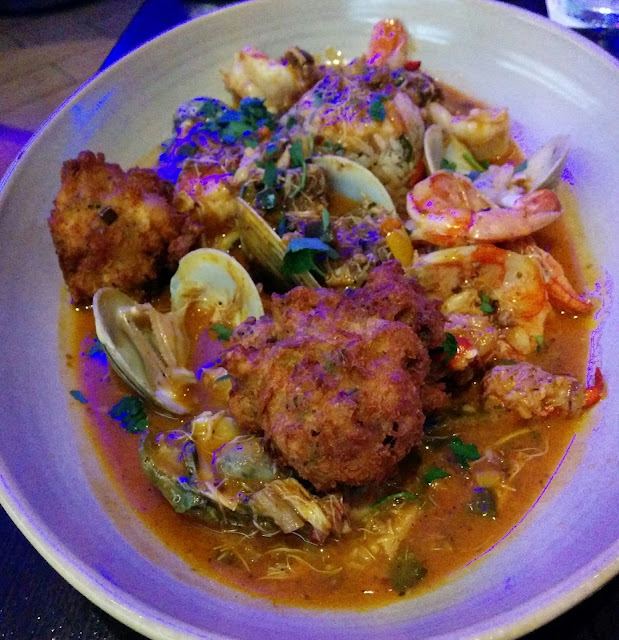 every one was a winner.  We had started the evening at home with a white burg- a 2002 Puligny-Montrachet, Les Pucelles from Girardin which showed very well and, good news, we still have a few more bottles of that! Then we took to the restaurant a 1996 red burg - just a plain Bourgogne- which showed terrifically even at 20 years old (as Phil pointed out - it was not even a "village wine" - much less a premier cru or grand cru which would have been expected to age that long.)

so our red burg - 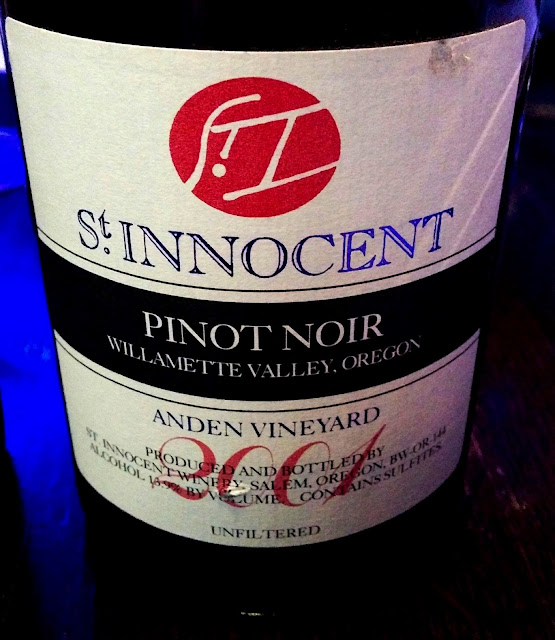 we were unexpectedly able to meet Eric Hale - the wine guy for Louie's Modern - who usually isn't working on Sunday nights but was called into service for the big romantic day ... so that was really fun and at the tail end of the evening, we were able to again share wines with Jeffrey Gissinger the terrific manager of Louie's Modern.  Wine geeks always find each other - LOL....

So our fun and spunky server Kristin (we requested her, knowing from our last visit how fabulous she was- attentive and helpful but not in that "paid to be nice to you" way) was on duty and we again had the same level of service from her despite the amazingly crowded room.  This place was so busy it was the first restaurant we have been to for dinner in a couple of weeks where we weren't the last ones to leave LOL.

We had two desserts - the skillet cookies (our second try was as good as the first) and a new one - the salted caramel crunch cake... another good choice but not as amazing as the skillet cookie- which is dream worthy...  I will leave you with this dumb funny comic for Valentine's Day- as well as our kudos to Louie's for an outstanding job on an extremely stressful night- 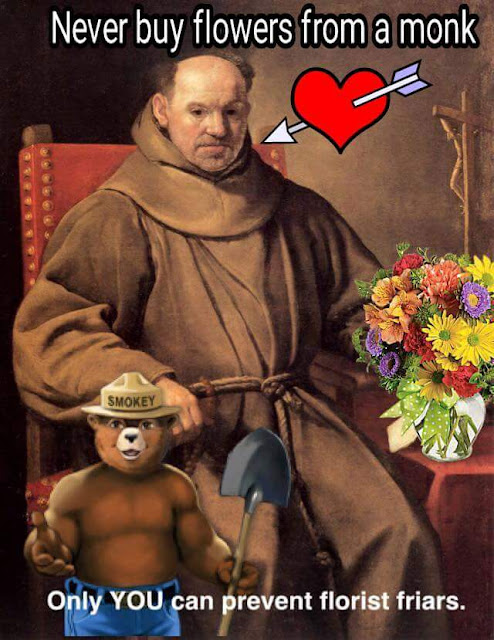 off today to give a second chance to a place we mostly panned after the first visit... and then later to a lecture at the museum and then finally to our favorite island place - Blue Marlin.  We also have indigenous "on deck" so our friend Maryanne (of NYC) will get a taste of what our area has to offer folks who run away from the cold...LOL - more later...
Posted by TOR at 11:27 AM