So we arrived home on Friday night at 8PM and the cat was yelling at us about where have we been... we got the laundry started and crashed... woke up early on Saturday and finished the laundry so we could be ready for guests arriving Saturday around 2 PM.  Well technically they aren't guests- it's Steve and Suzanne LOL (you remember them - our favorite sister in law and Phil's brother)

S&S, as we refer to them, were making a short stop here to celebrate Steve's birthday with us after spending a week in St Louis to drop off our nephew Jack at Wash U for his freshman year! (OK not to sound ancient but we remember hauling him in a tiny little carrier to the IPNC when he was four months old!- where did that time go??? LOL)

So we hadn't been to EL Ideas for a while, and reserved for dinner there- they have a 5:30 seating and since we just got back from Stockholm roughly 22 hours earlier we thought that would be a better choice than the 9:00 one...

Here is my executive summary- Phil Foss is totally and completely on his game right now- this was the best meal we have ever had at EL Ideas... with amazing flavors and creative presentations - a nearly flawless meal...  and I will start with a photo of what was one of the most beautiful courses and then go fully into the meal - 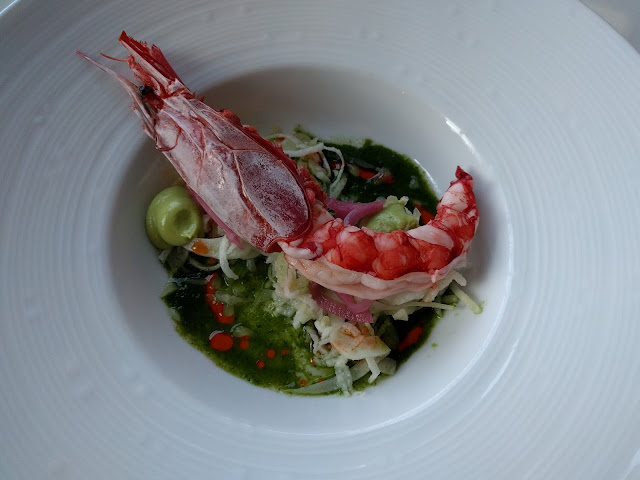 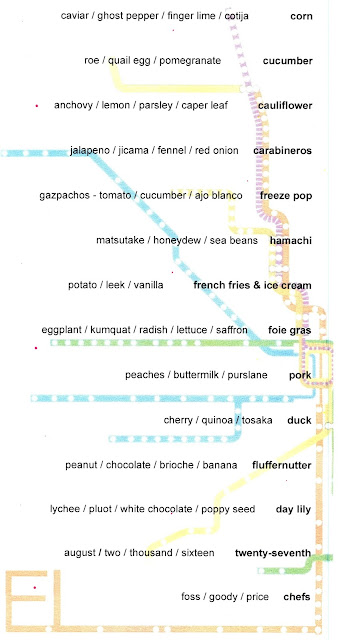 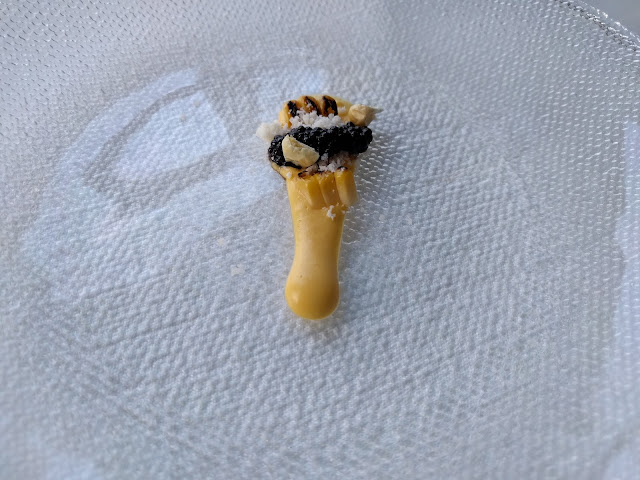 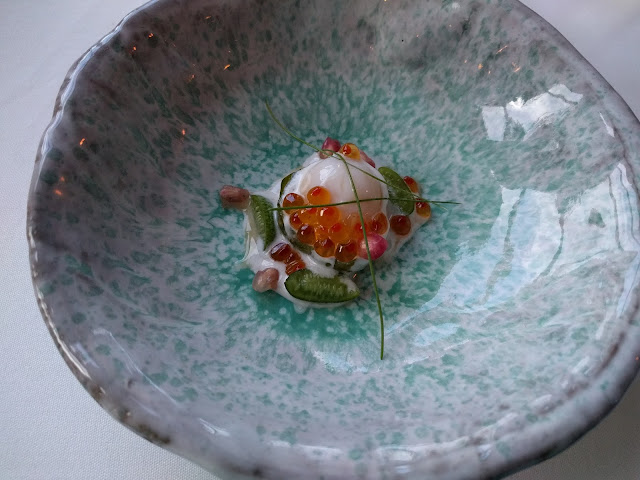 anchovy with lemon and cauliflower- 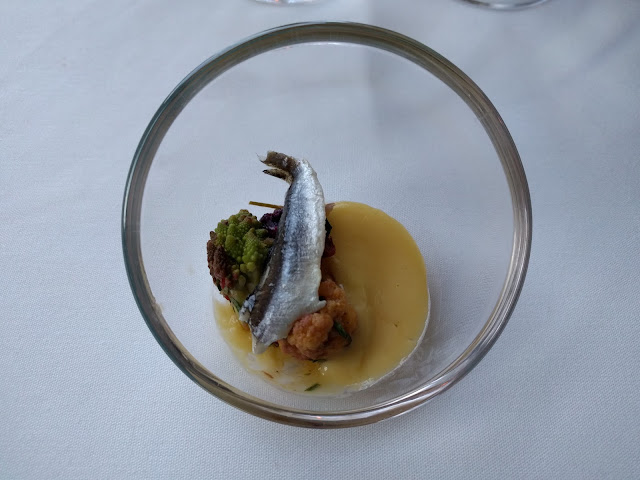 the prawns- with a fabulous jalapeno sauce 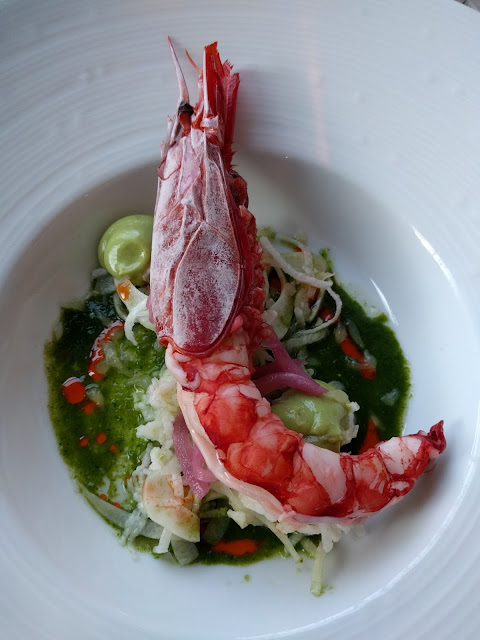 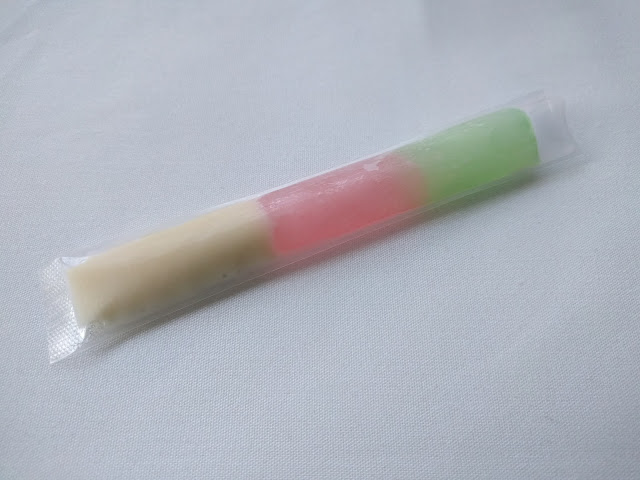 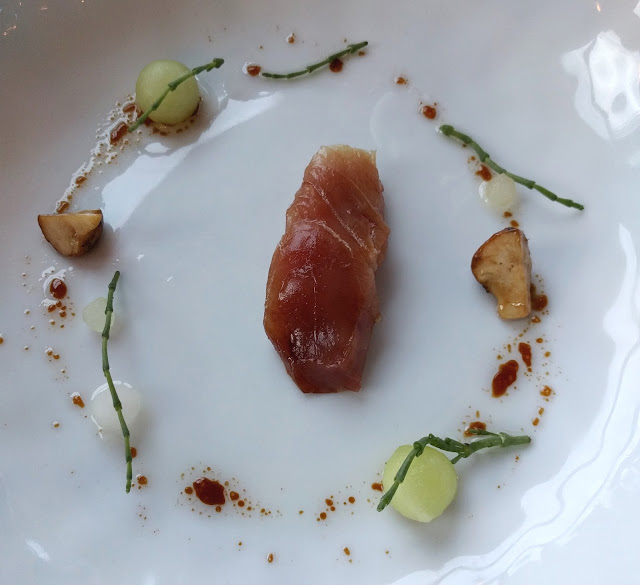 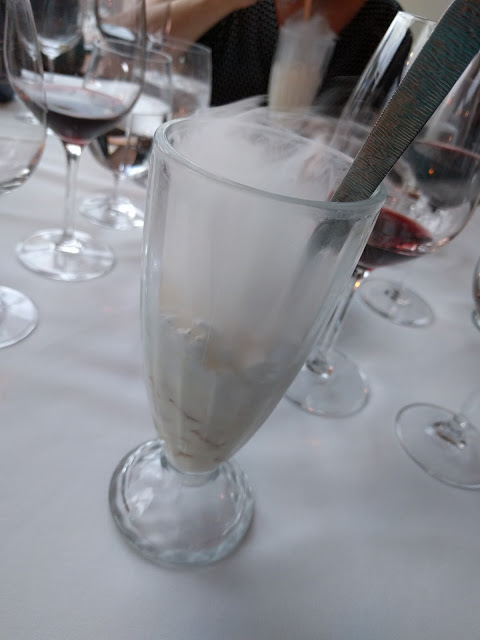 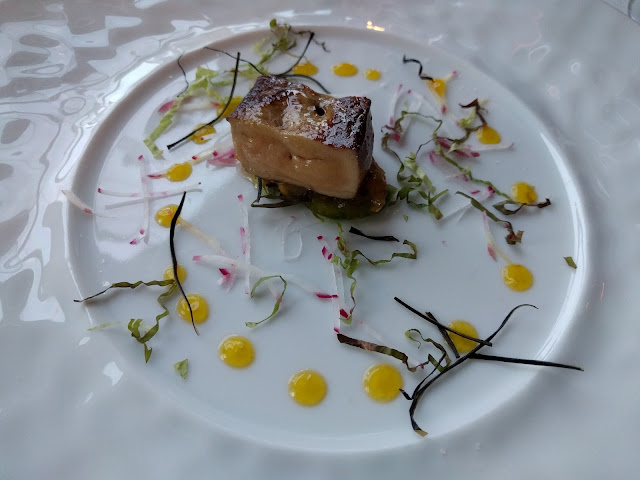 a beautiful dish of peach purslane and pork- with a tasty buttermilk biscuit! one of my favorite presentations- such a beautiful plate- 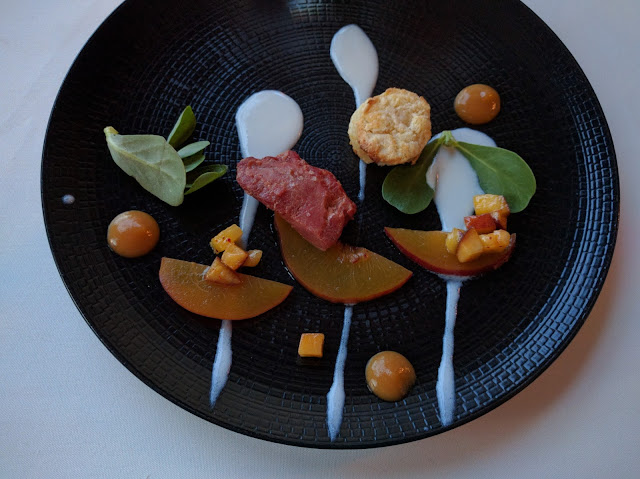 this arrived for the scent alone and boy did it smell terrific! cherry branches which the blossoms had been used in the next course of duck- 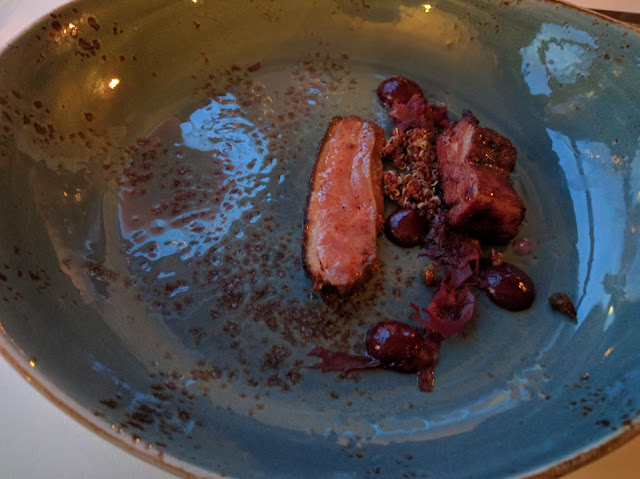 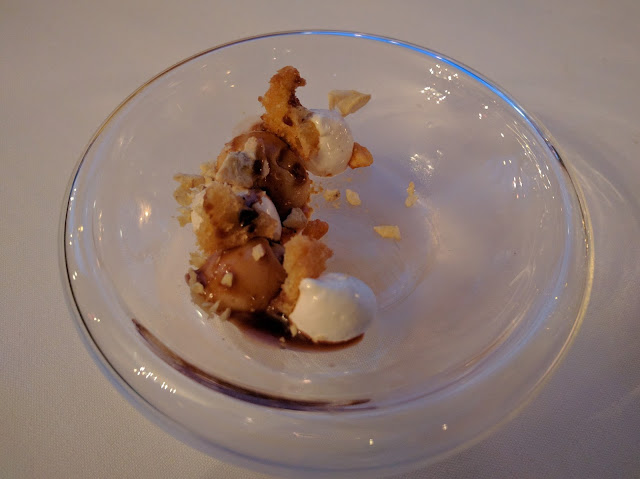 the final dessert was the only weaker link- the biscuit part was dry and other than the top disc somewhat lacking in flavor - I think because it was white chocolate based with subtle fruit (lychee is not a strong flavor) it needed something to give it a bit more oooomph... 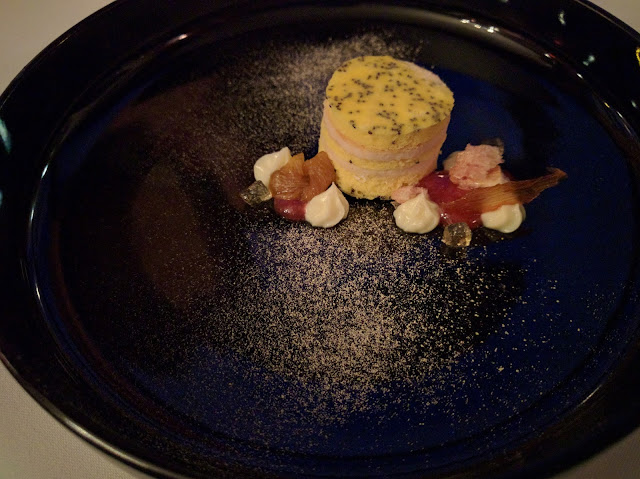 A flawless meal despite the final course not being to my liking so much- and a number of courses that we would love to have seconds on! 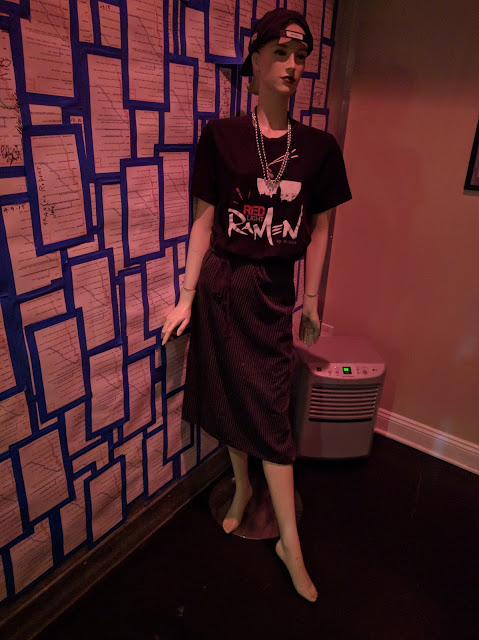 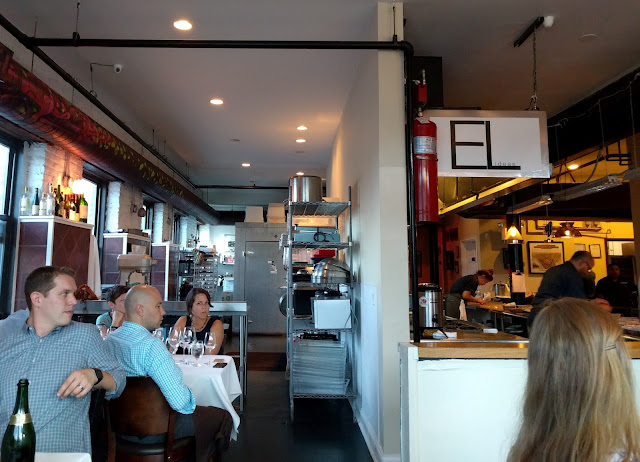 For the wines we had a Kistler 2005 McCrae 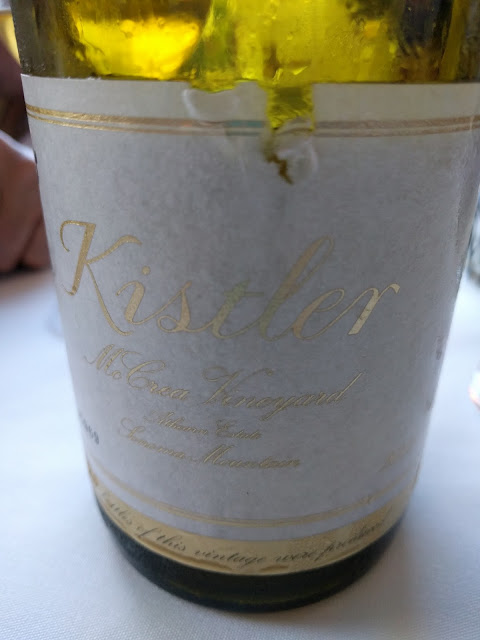 And an Archery Summit Estate pinot from 2004- which was magnificent! 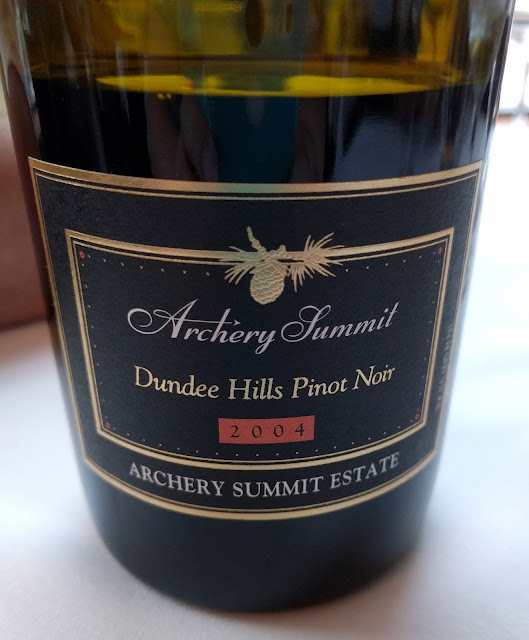 So thanks Jack for choosing college close enough to us that we got to see S&S and an excuse to revisit EL Ideas! 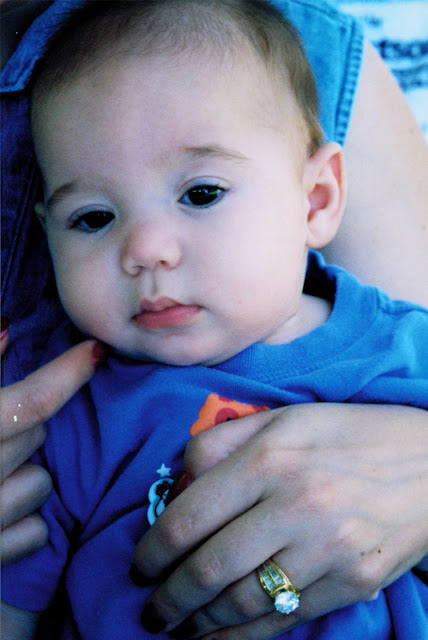 So today we have meals scheduled for two of our favorites - mfk for lunch and 42 grams for dinner... so there will be more S&S posts before we get around to the trip to the Baltic- so keep tuned in for more!
Posted by TOR at 10:02 AM