so of course I am thinking about lots of things my mother and I did over the years that we were traveling companions.  we pretty much loved everything about traveling - the planning - the trip - the photos to review afterward - the stories we gained through our experiences.  I think it might be said that there was hardly a trip we had a bad word about.  but you did catch that "hardly" didn't you?

let me back track a bit. my mother traveled her whole life.  her father had the travel gene and he passed it along to his two daughters, my aunt Phyllis and my mother Jane.  my grandfather took a tramp steamer out of New Jersey when he was barely of age.  he went down the coast as far as Florida and got "shanghaied" by a lovely young lady from Cincinnati that he met at a country club down there.  the rest was history... he married the young lady- my grandmother Catherine-  and moved north to start a career of 47 years with Cincinnati Bell Telephone company. but he never lost his wanderlust and headed off to various spots around the globe over the years.  when I was ten we went to a bon voyage party for him as he headed off to Africa.  at ten this seemed to me to be the most exotic place I could imagine

during the war years my grandfather and my mother's great aunt Fan saved rationing coupons for gasoline so that they could travel across country to take Fan to visit relatives in California.  each time they went they took a different route. they would drop Fan off and head back to Cincinnati and later Fan would take the train home.

later when my mother had married my father (my grandfather was incredulous about her intentions..."You aren't marrying that fat German boy are you?" ) she still had "itchy feet" as my dad always called it.  she continued traveling after a fairly short hiatus to have three kids.  My dad called her TA (traveling Alice- Alice was her given name.)

after the kids were gone and my dad still working she traveled with her father and sister and with me.  sometimes she even convinced my dad to go places - he did business in England each year so frequently their trips were to some European location easy to get to once they were already in the UK.

I digress - this is actually the story of one of our trips- a trip we lived to tell many tales about but a place we swore we couldn't understand the appeal of.

after having made inroads in Germany, Italy, France and England we decided to visit Ireland.

we planned our trip for the end of June the beginning of July thinking summer would be the best time to visit.  we wrote and faxed to hotels and B&Bs and plotted our route through the southern half of the country.

we had some fabulous meals and saw some wonderful sights but found the weather to be disagreeable.  not an occasional day in the three week trip but the whole entire trip.  but the best of our stories upon our return was of the day we took a trip across a lake and up through the Gap of Dunloe.  because the weather had been so awful- even though we planned this day as our 4th of July celebration (think outdoor BBQ back home with sun and heat) I had bought a lined windbreaker the day before this particular journey. (thank god for foresight)

the trip was billed as a boat ride across the lake, a lunch at a lodge on the other side, and a jitney or horseback ride up through the Gap of Dunloe ending at Kate Kearney's cottage for a pint. and here is what we endured. 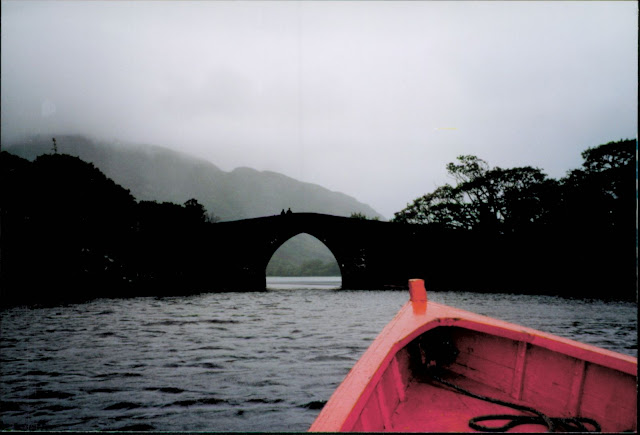 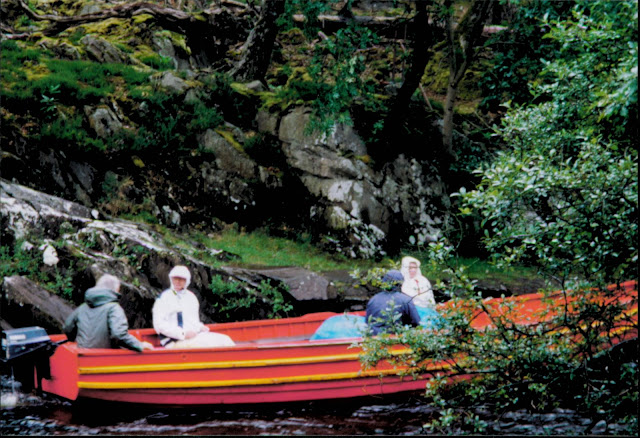 bad enough that it was about 40* F, but about ten minutes after our boat left the dock it started to rain.  the boat man pulled out garbage bags to put on our laps.  about a half an hour or forty minutes into the boat ride we got to a place where he made us get out of the boat in the rain so he could take the boat through a shortcut passage that was too shallow a draft for the boat full of the six of us (my mom and me and a nice family of four.) my mom refused to get out.  here is a picture of her in the boat.

then after we finally arrived at the lodge for lunch we got a cold sandwich and a soda.  we chose the jitney over the horses and got in the back of the carriage.  we hadn't gone more than fifteen minutes from the lodge when the driver of the jitney told us to get out and walk two miles up the hill through the Gap because the horse couldn't pull the four of us (my mom and me and two young teen boys.) my mom refused to get out - and stayed in the jitney while I walked the miles up hill through the Gap of Dunloe in the rain.  more photos: 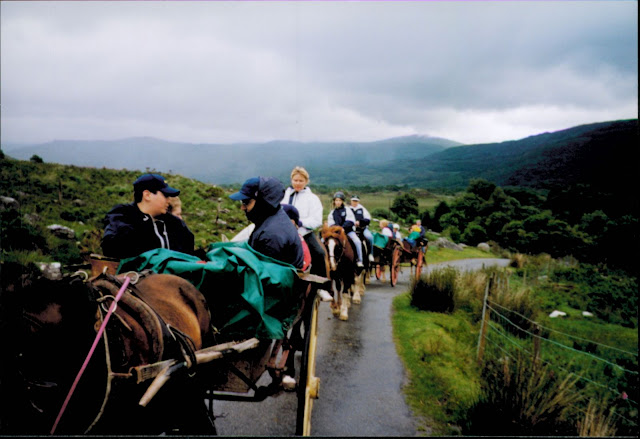 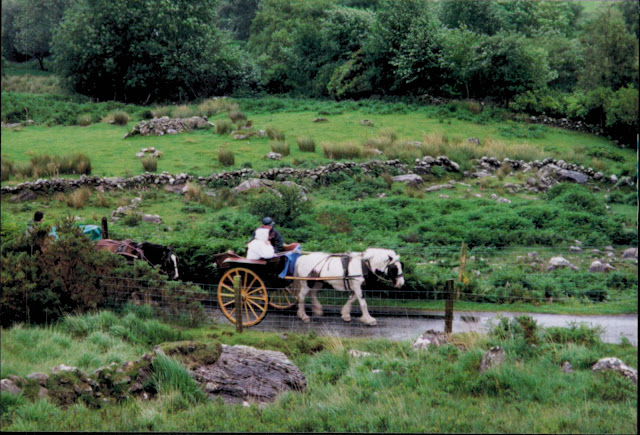 remember this is the fourth of July- and we ended up at the cottage as billed and I spent the entire time we waited for the shuttle back to town outside in the rain because the cigarette smoke was too thick to stay inside- awful day, awful weather, awful place.

another example- here is a photo of Bantry Bay from a day or two earlier: 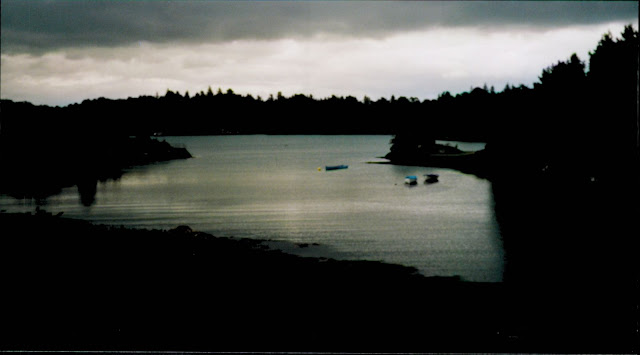 the Irish are very fun people but they can have their country - don't really understand why the Brits wanted it in the first place- just god-awful weather!
Posted by TOR at 1:50 PM

Email ThisBlogThis!Share to TwitterShare to FacebookShare to Pinterest
Labels: gap of dunloe, ireland