We are off in the morning to the mountains (the atlas mountains) near Tozuer.  We are divided into two four wheel drive vehicles.  We have driver Hadid who is very patient with Jennifer’s practicing of the french. LOL  She knows a lot of words and is very good with putting together simple questions and answers but her pronunciation is awful.  She knows this and is seeking assistance from her French teacher Rede who is from Morocco.  She signed up for fifteen lessons and these have been helpful for reading all kinds of marketing BS on the back of wine bottles and such. LOL
Anyway- we are paired with Max and Dick in the lead car for the first part of the journey.  We head out of town to the south and west and after about twenty minutes or so go “off road” to the north, where we cross lots of sparse vegetation not unlike southwestern New Mexico in the US.  That is until the camels start crossing in front of us.  We stop for a few photos and then move on to some dunes where we have an “E” ticket ride on the amusement park scale.  Up and over and down on the dunes.  We pass a couple of guys on camels and then they must have cell phoned ahead to all the nearest neighbors because as we pull into the first stop we are immediately surrounded by hordes of vendors – well actually there were probably a dozen of them but they were persistent in their sales appeals.  We have arrived at the location of the Star Wars filming from 1997. 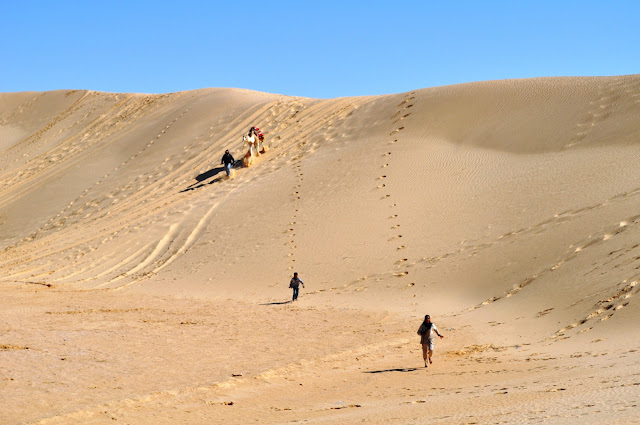 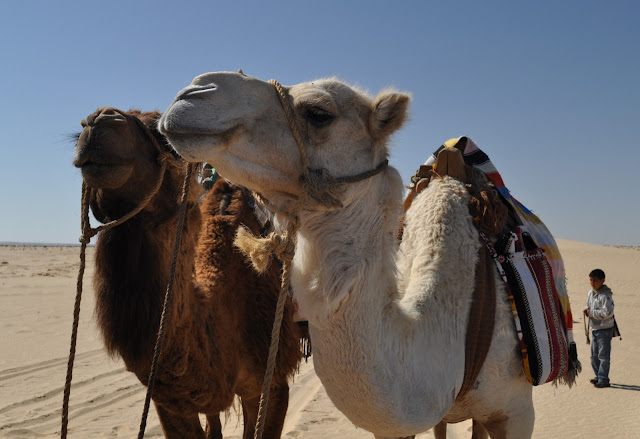 George Lucas apparently filmed here for more than twenty years in various locations and this was one from 1997 – the last time he filmed in Tunisia.  The English Patient was also filmed here.  The set is in fairly good shape even after more than a decade as the place is extremely arid. 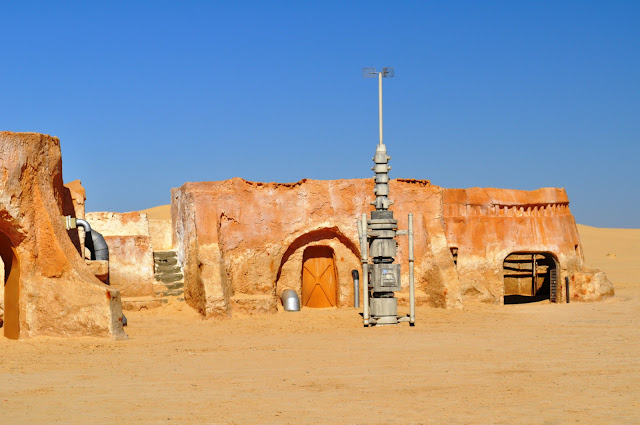 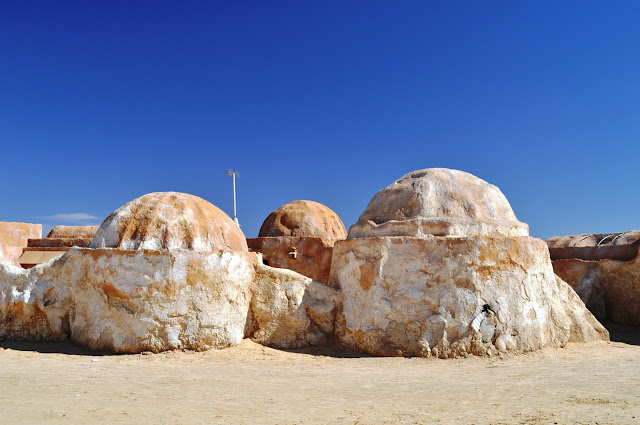 Time enough for photos and a bathroom stop (70 cents- but clean) and we are off to our next stop.  The nomadic family homestead.  They raise animals here and the animals have babies at this time of year.  So we get to see kids and kittens and a newly born baby goat- just moments old still struggling to stand-  as the mom goat cleans it up a bit.  There are lots of chickens and some baby chicks and a turkey – a regular menagerie in the middle of the desert, but close enough to the oasis that they can bring water from there on their mules. 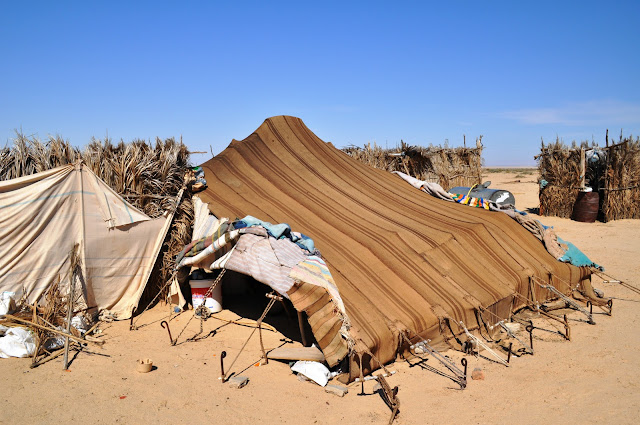 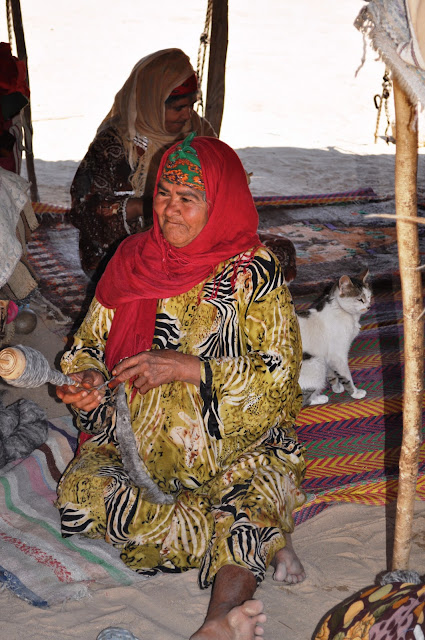 We move on.  Next we are headed to higher elevation and three small mountain oases.  The first one is Chebika where we stop for a hike.  I take the easy somewhat shaded route to the waterfall and the others take the forty minute hike in the noon day sun to get to the same site by the long way around. 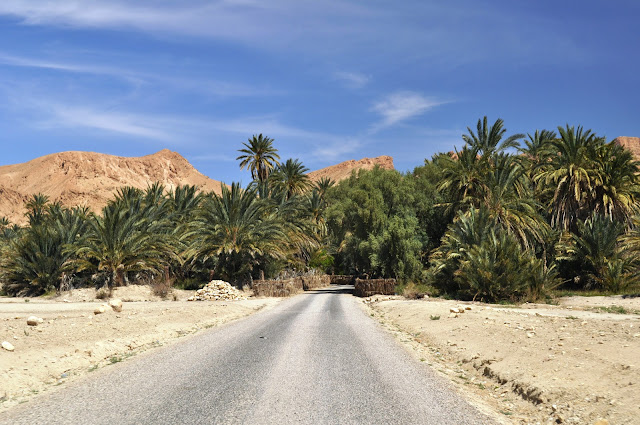 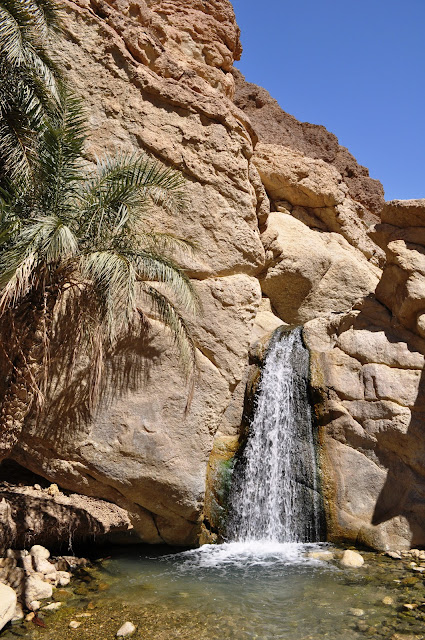 Then we are off to the next quck stop at a panoramic view point over the salt flats and the oases down below.  Then on to lunch at the second town, Tamerza, in a fancy resort hotel.  We have nice salads and appetizer thingies and then a mixed grill of kebabs and sides of potatoes and zucchini.  The dessert is a date mousse which is quite cloying.  I manage to eat mine but Jennifer flags somewhat.
Back in the cars and on to the final stop Mides – which is right on the Algerian border.  Here they have a deep canyon carved eons ago by water.  Now there is only a hint of a stream from underground springs.  More souvenirs on offer but not much buying.  We ride the hour and a half back to town speaking broken French with Hadid who seems amused- LOL although we do manage to communicate a bit. 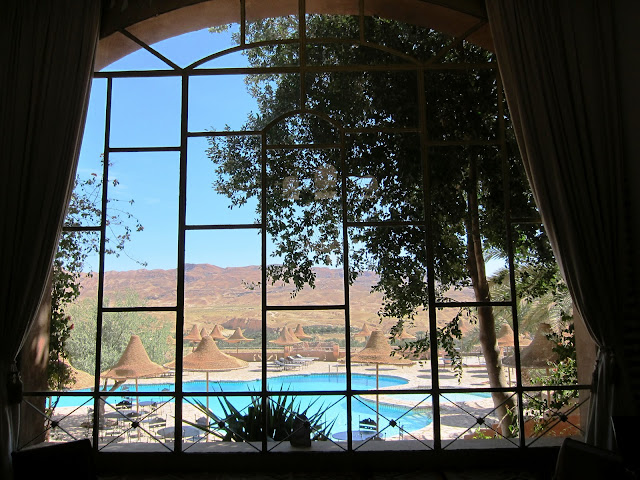 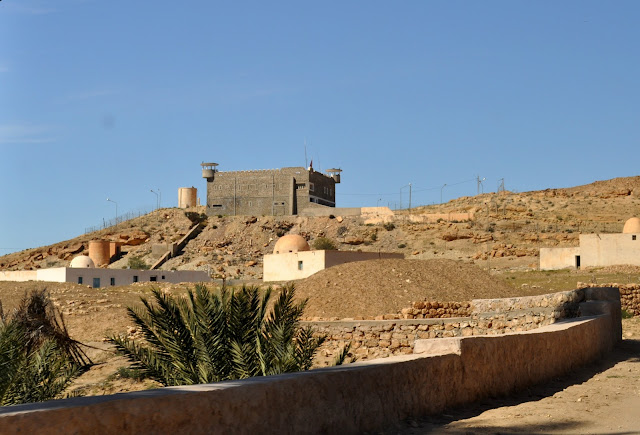 Dinner is on our own and we elect the hotel so we can eat lightly or not at the buffet which had an excellent salad bar.  And the cost is 15 dinars (a bit more than 10 dollars) – can’t go wrong with that.  We agree to meet at 8 PM as we have packing to do and tomorrow will be limited to a small bag for the camping night in the desert.  I am very much looking forward to seeing the stars.  When I last camped in the Sahara in 2000, in Morocco we didn’t see stars because there was a sand storm.  For years I had Saharan sand in my duffle bag.  This time the weather looks to be good.  Maybe a tad hot during the middle of the day but we should survive quite nicely. 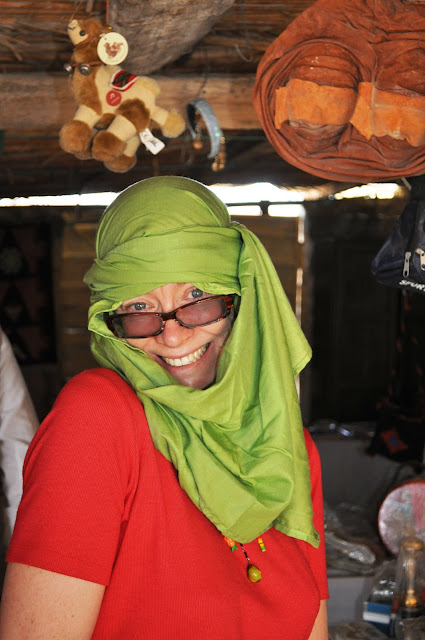 Jennifer after a scarf tying lesson at one of the stops.
Stay tuned!
Posted by TOR at 2:45 AM