was in town last night so we went to see the 86 year old guy who is still having a good time on the road - his joy for being in front of an audience was infectious and it was just plain fun to spend an hour or so with the King of the Blues...

I laughed when I read this blurb from the program-
BB King was inducted into the Blues Foundation Hall of Fame in 1984 and into the Rock and Roll Hall of Fame in 1987, where Sting of the Police made the induction speech. He received the Grammy "Lifetime Achievement Award" in December 1987 and won the Lifetime Achievement Award from the Blues Foundation in 1997.

His lifetime achievement Grammy was awarded more than 24 years ago! 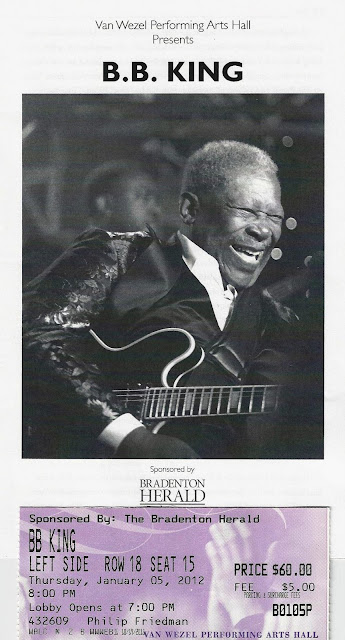 Email ThisBlogThis!Share to TwitterShare to FacebookShare to Pinterest
Labels: b b king concerts