is among the toughest restaurant reservations to score in the entire country much less the city- I was invited by new friends to join them and another single diner (Phil had a concert last night that he decided not to skip) for dinner at schwa!
I was very excited for several reasons- among them the opportunity to enjoy the meal at this renown place - Wikipedia entry to follow- and also to get to know Mon and Beth (who included me in their reservation) better...
last new year's eve we were invited to goosefoot for a special dinner- we delayed our departure to Florida by a day to attend.  During the course of the evening I noticed that one couple in particular was having a really good time- enjoying themselves whole heartedly and engaging with other diners and radiating goodwill.  I asked Nina about them as we left the restaurant that evening and she knew immediately who I meant- they were another couple that had become friends with Chris and Nina.  NIna said we would really like them and so I told her it would be great if sometime we could both be at goosefoot and meet.  On the evening we were celebrating Steve's birthday when Steve & Suzanne were in town - it turns out Mon and Beth were in with friends to celebrate Beth's birthday as well.... we made brief contact and shared some wines in celebration of the events of the evening.
fast forward to two weeks ago when I got an email from Beth asking if we could join them for either Schwa or Next (the Bocuse menu) and we both had the Next date available.... I was open for the Schwa date but Phil was not so we declined but they were happy to include me as a single - hence my opportunity to visit this incredible place-
the Wikipedia entry-
Schwa is an acclaimed, upscale restaurant run by chef-owner Michael Carlson in Chicago, USA. It is considered a leader in the emerging molecular gastronomy style of cooking. Schwa is known for its unconventional approach to business. Simple table settings match the building's drab exterior and its tiny 26-seat interior. The restaurant employs no support staff of any kind. Chefs interact directly with customers and are encouraged to act as silly as they wish, as long as they produce top quality food.  Opening in 2005, Schwa quickly drew local and national attention resulting in a large backlog of reservations. In 2007, after a four-month hiatus Schwa returned, much to the delight of local culinary enthusiasts, or "foodies".
Schwa's food is difficult to classify, or as one critic put it: the food is "one of a kind... earnest, innocent, irresistible, and imaginative". Schwa's menu is famous for shocking ingredients and innovative food combinations, such as Carlson's version of pad Thai made with jellyfish tentacles instead of noodles. The quail egg ravioli is considered the restaurant's signature dish.  Schwa has received positive reviews from both local and national critics.  Schwa features "some of the best food you will ever consume", while famed chef Grant Achatz lists it among his personal favorite places to eat. In 2009, Schwa made Frommer's international list of 500 exceptional restaurants.

and the good reviews all say they same thing too- food was orgasmic/sublime/perfection etc... sooooo-

so here we go with the review-

first- this is a fun place- I LOVED the interaction with the guys from the kitchen- they truly wanted us to love every dish and for this to be a superb evening.  and honestly not every dish was brilliant but it didn't matter because they were so damned nice.

third- even the not quite brilliant ones were interesting in the effort to find those combinations that are so sublime you get to the level of the "second" point above.

when I came in I told them I had heard they like unusual things to drink so I brought them a flavored vodka from Ukraine and a pear eau de vie from Germany. My hosts, Mon and Beth arrived shortly and we got started with the food right away-

Mon brought a Veuve Rose that was a super start with the earliest course which would be rough to pair with- then we opened the Torrontes I brought and then the nebbiolo and a Hope + Grace cabernet and finally a Tokaji Aszu for dessert.

unfortunately I will never be able to give a run down of what was in each dish nor even close to it- so I will mention the big items and hope that entices you to give it a try on the reservations line.... 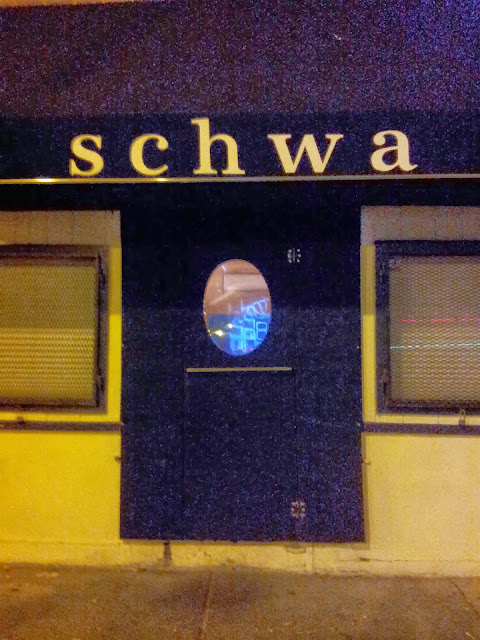 a sardine course to die for- amazing flavors you drench your sardines in kind of mopping them through the plate- (who would have ever thought sardines to die for????) 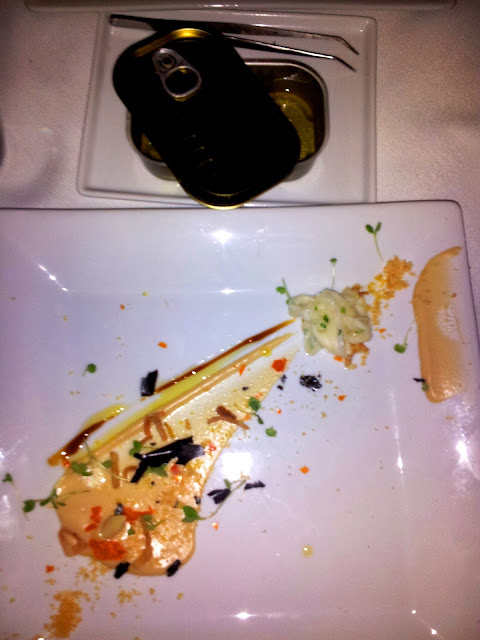 OK these next two are the reason to sell the house the kids and the car and come for a meal here- the raviolo of quail egg with truffle and orgasmic cream sauce-
followed by rabbit tagliatelle that was other worldly! 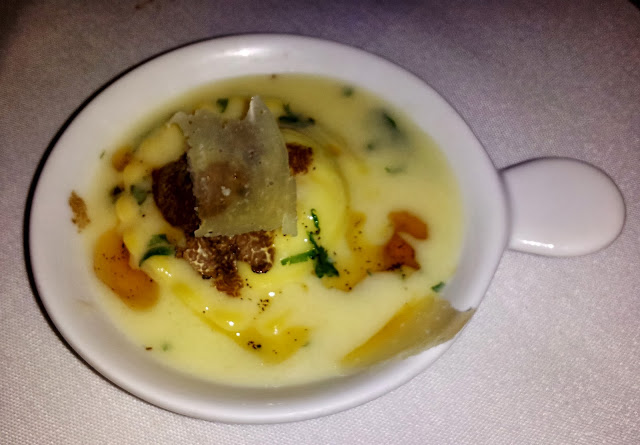 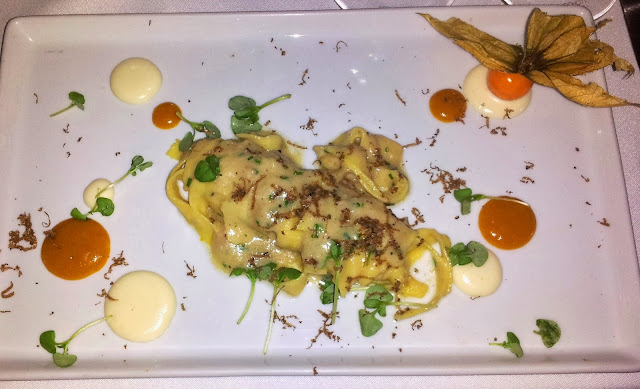 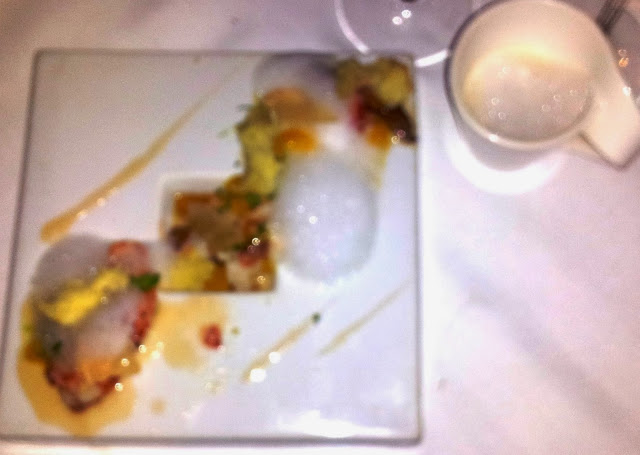 a one bite ice cream and ??? sorry I am feeling lucky I have gotten us to this point without any take away menu- LOL - no - it is coming back to me- a panzanella (bread salad) course- I must have blocked it, as it was one of my least favorite - LOL 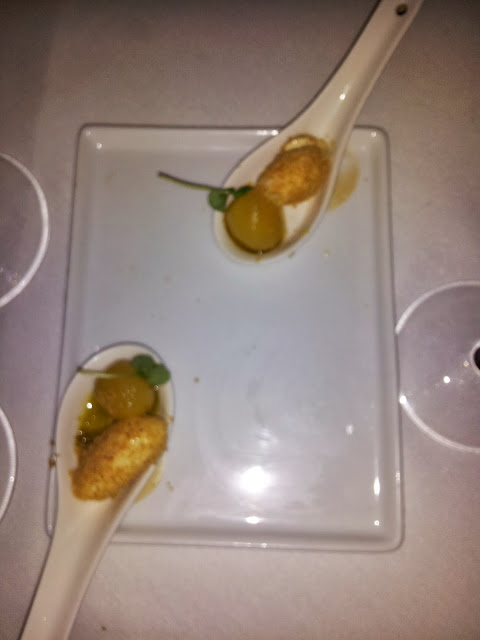 OK and another ??? except I do remember how fabulous the green soup was made of something like 27 herbs... it tasted FRESH in the very best way - yet luscious as you can see some oil lurking under the veg green top...and the fruit was rambutan 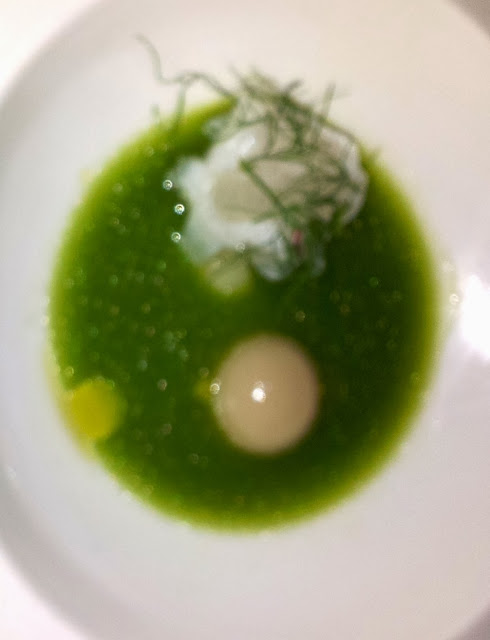 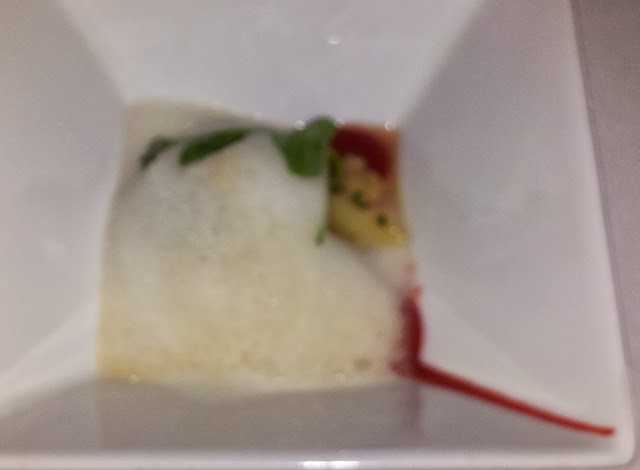 the next course was the meat - and it wasn't venison - LOL- or duck - both of which we guessed upon arrival- but antelope- and it was prepared perfectly- tender and full of flavor but not gamey- again you dredged it in the various flavors on the plate. 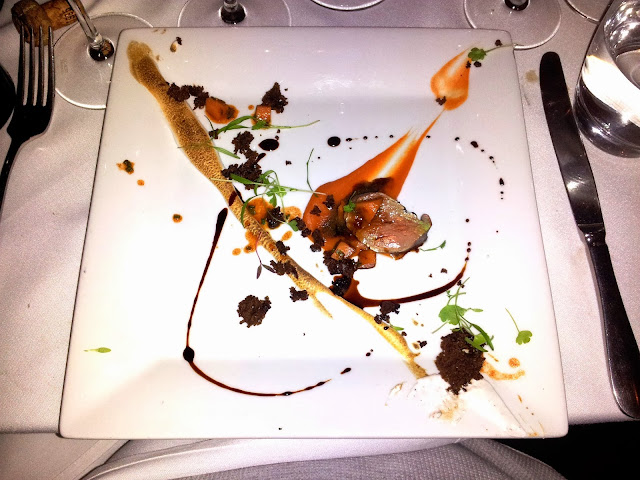 uni ice cream covered in blueberry dust - you ate in one bite - sniffed the spruce branch (don't eat it) and then drank the potion below- but I am hard pressed to say the flavor of the below liquid...oh well...wait- it's all coming back to me now! GINGER BEER! house made and with a real kick! 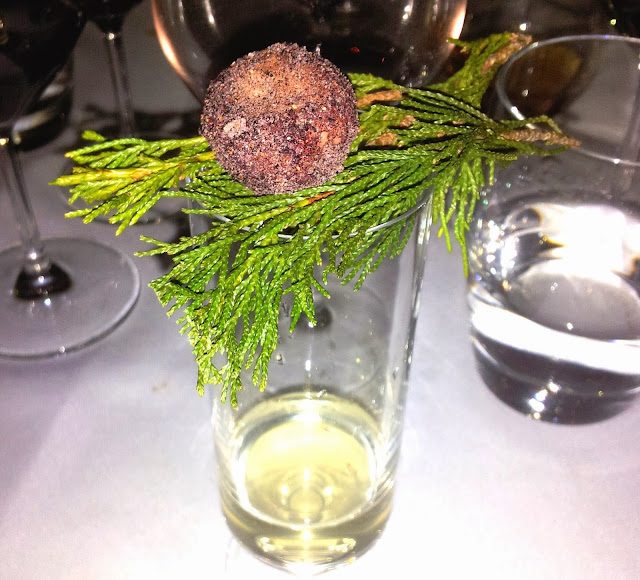 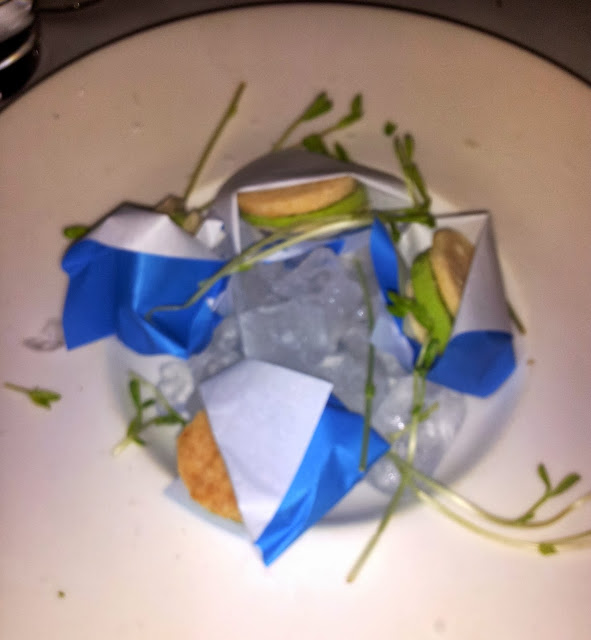 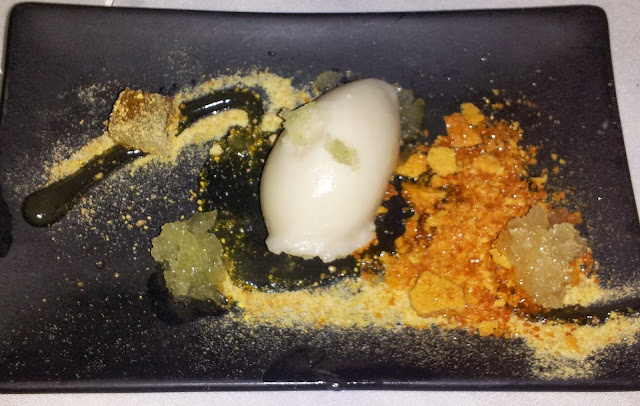 so I am so sorry I couldn't give you all the exact info on the courses - many were excellent and as I said there were two winners for me-  the only real miss  was the pork belly accompaniment - the pork belly was great but the other flavors not so much...

and I feel like I have missed a few along the way- because I distinctly remember both yuzu and fava beans being used in courses that I cannot pinpoint here- LOL- as I said "oh well"- I enjoyed myself - and wasn't worried about committing every little thing to memory....

all in all - a fun evening - I especially liked how friendly the staff was and how much fun they were having- it is infectious.... a special shout out to Mon and Beth for hosting me!
Posted by TOR at 11:37 AM