about the Cardinals winning the World Series? well you would have thought this was THE most amazing thing you would ever see in Cardinals World Series play- and you might be right but then again you might not be- because here is what happened last night to bring the Cards into the lead 2-1 in the World Series with the Red Sox of Boston (good thing Ellie is in China and didn't have to watch it- LOL)

"The lollapalooza commenced when Jon Jay hit a sizzling ground ball, snatched by Red Sox second baseman Dustin Pedroia, who threw a dart home to cut down Molina. The opportunistic but physically limited Craig took off for third base on Pedroia’s throw — and let’s just say Usain Bolt has nothing to worry about in a foot race with Craig.I don't know if Allen Craig could win a race against Torty Craig, his pet tortoise. Close call.

Boston catcher Jared ltalamacchia shouldn't have done it but he fired the ball to third to nab the sliding Craig and snuff the Cardinals’ threat. But an overthrow zoomed beyond third, into foul ground near left field.

Craig tried to get up, but was tangled with Boston third baseman Will Middlebrooks, who was face down on the infield dirt. Craig dislodged himself, but Middlebrooks raised his legs, and Craig tripped.

Finally a free man, Craig made a desperate bid to score, not knowing that Joyce had already made the obstruction call that had brought Game 3 to a chaotic close. 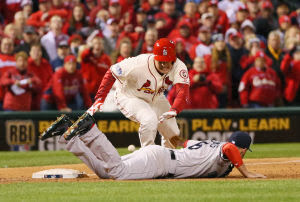 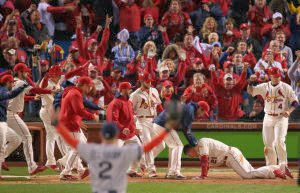 Kept running on that gimpy foot.

Kept running for his team.

Running despite the pain, the discomfort, and perhaps the fear of another injury.

“I felt like I was running in slow motion,” Craig said.

He kept running because this was a pivotal game, and it was the only thing to do.

Craig kept running as if the World Series depended on it … which it may have.

“I was just trying to get home,” Craig said. “I didn’t have much in the tank.”

so- congratulations Cards!
you gotta love a team with this much heart! Good luck, hope you get the third and fourth wins in short order so you can put my husband out of the misery of being on pins and needles each time you play.....
Posted by TOR at 10:37 AM