so finally we are off on the "main" trip- we pack and check out of the JW in HKG and then store the bags while we go have another fabulous sushi lunch! We head to the airport train station in Central and buy tickets so we can check our bags all the way to Lijiang.  We have a "direct" flight - or so we thought we did- 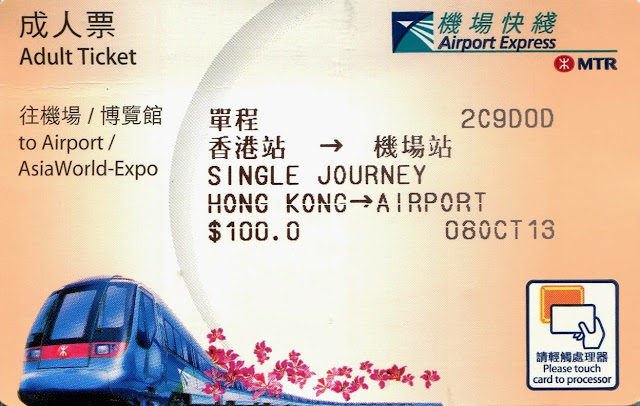 we were to fly via Kunming to Lijiang- our flight left at 5PM.  Here is a map of the Yunnan province- where we were headed: 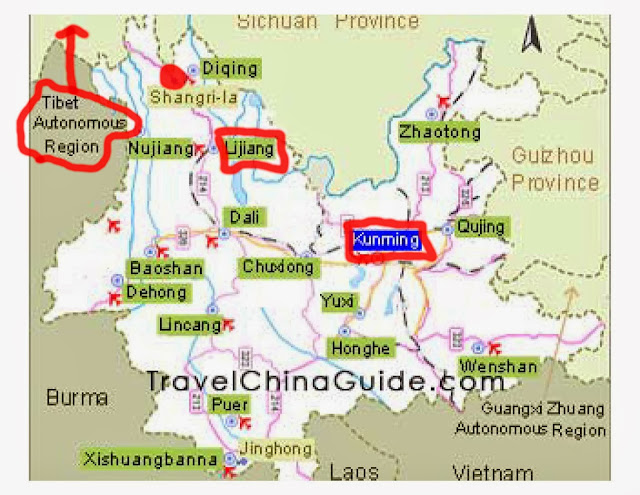 you can see it is the area of China that borders many other south east Asia countries such as Myanmar (my favorite trip) and Vietnam (my second favorite trips) and that it is very very near the Tibetan Autonomous Region (we'll just call it Tibet here.)  Kind of keep this map in mind as we progress through the next few days of travel- so you have an idea of where we are....
we had been to Tibet in 2002- before the Chinese Railroad went there and the influx of vast numbers of Han Chinese- but that is another story altogether...
when we reached Kunming the crew insisted we get off and take all our carry on baggage with us. this was despite the fact that a Chinese American couple who spoke fluent Chinese told us that Lijiang was an international airport with customs and passport control facilities there. Never mind- the officials barked at us (all of us- about 40 people or so) to get off and follow a staff person.  We did and basically ran through the back of the airport with special lanyards and passes to go through a TRANSIT customs and passport control and then ran to the next stop- SECURITY- even though we had 1. not been out of the secured area and 2. been accompanied by our guards the whole time.  then it was on through the actual airport (entering it up back stairs) and rushing through the airport back to the very gate we arrived at- then the plane took off for Lijiang.  The Chinese-American couple told us they probably wanted the customs and passport people in Lijiang to be able to go home rather than wait for the delayed flight (oh yes - it was delayed- as was every single flight we had in China) to arrive.
so on we trooped- and to entertain us we had the seat back covers on the airplane to peruse- all of China (just like we are heading in the US) is covered in advertisement of some sort- 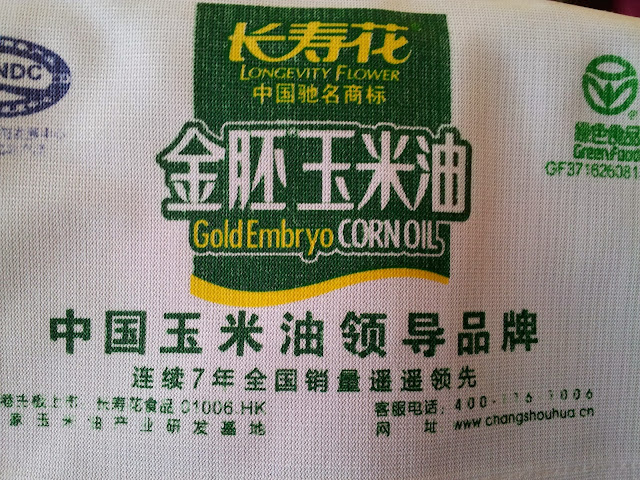 maybe it is just me- but I don't find embryo a good selling point for CORN oil- if you were selling some egg or chicken product maybe it would make sense but this just seemed disgusting - LOL
so we finally arrived a Lijiang about 10 PM roughly an hour late - which Anna (our new guide) told us was pretty good by Chinese standards... she is Naxi (an ethnic minority in Yunnan- one of 54 in all of China and one of a dozen plus in Yunnan province) and she is wonderful. I will tell you now- even though we wouldn't know until the end of the trip- she was our very best guide for the whole trip.
we drove through town and then way out of town to our hotel.  even at night we can see that the town is beautiful - traditional architecture and tree lined boulevards. our hotel - the Banyan Tree is spectacular- and laid out in a similar manner as the Cavas Wine Lodge in Mendoza where we stayed with Dick & Ali way back in "aught seven" (2007)...
it is late and the kitchen is closing but they have 24 hour room service so before we crash we order a soup and sandwich to share - we have a reasonable start for touring the next morning.
I won't go into day two except to show at the very end of this post the view from breakfast at the hotel- first though, here are a few photos of the room: 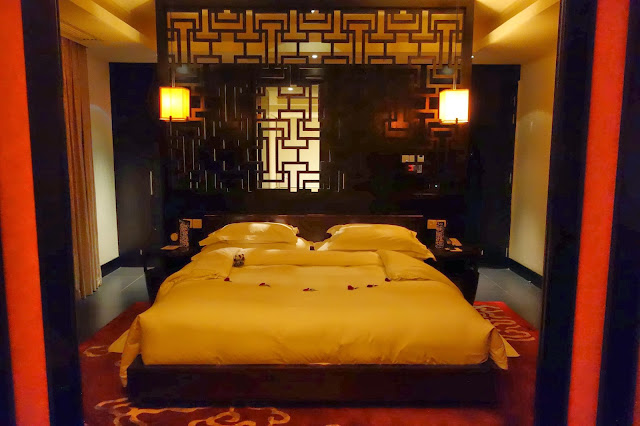 the wall décor is from the Naxi pictographs of the dongba religion- we will learn more about this tomorrow... 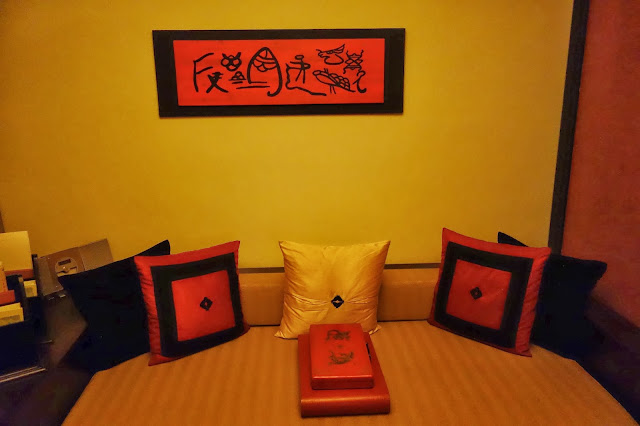 they left a game of GO on the couch but who had time to play? Not us! 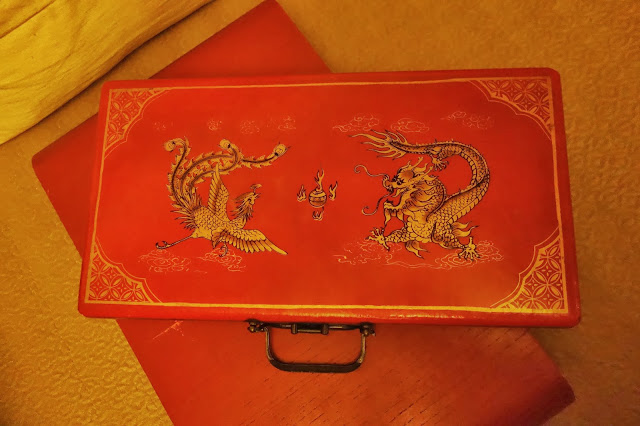 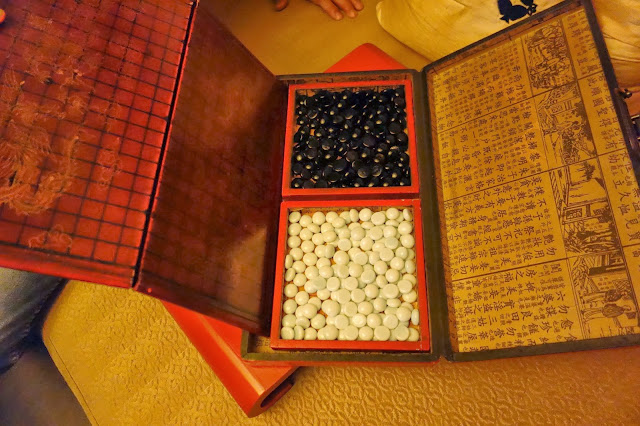 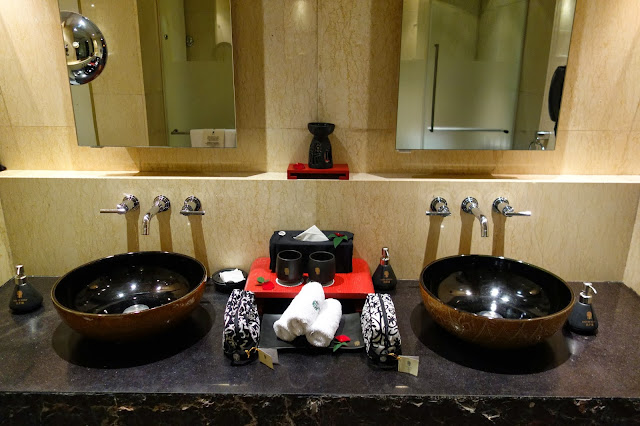 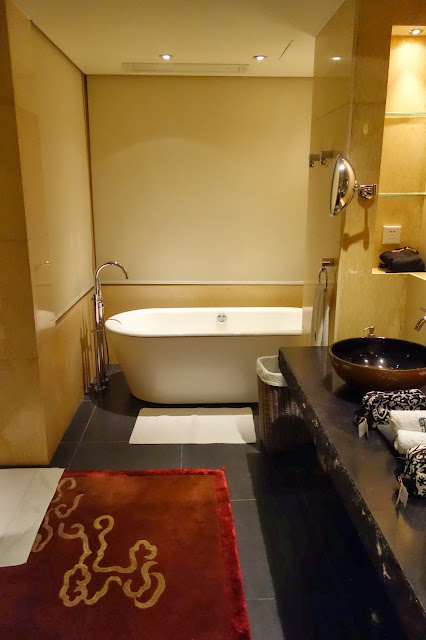 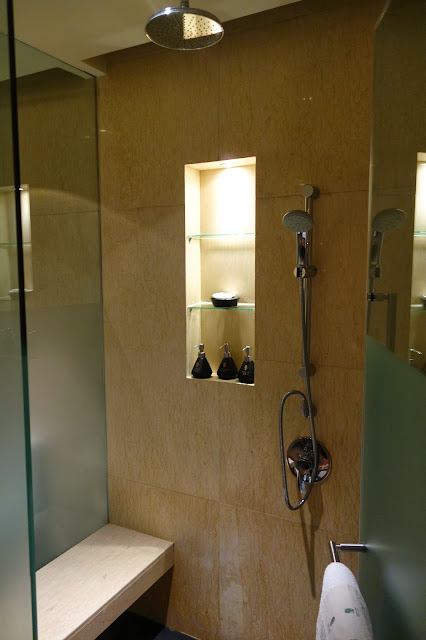 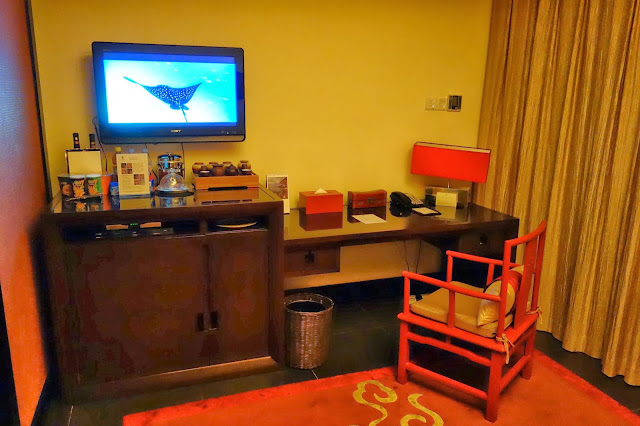 and here is the promised view from the breakfast room-  we don't have to rush off in the morning so after a good night's sleep I linger over breakfast with crispy bacon and a nice fresh omelet...  LOL 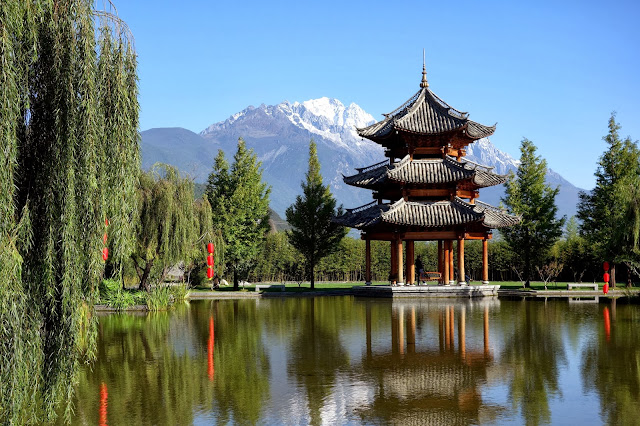 In the background is Jade Snow Dragon mountain... which you can see from pretty much all of Lijiang.  And before I leave you I want to fill you in a little on Lijiang from some tourist article we found-
"The word “breathtaking” when applied to a Chinese city too often refers to respiratory-attack-inducing smog. But in the case of Lijiang, population 1.2 million, in the southwestern province of Yunnan, the word takes on its slack-jaw-in-awe meaning. The horizon here is Himalayan, and the blue sky above the city’s stone streets, willow-lined canals and black-tiled roofs is reliably visible.  This unusual troika of culture, history and natural beauty is why Lijiang’s Old Town — a UNESCO World Heritage site and a center of the Naxi people, one of China’s most vibrant ethnic minorities — is a top destination for Chinese tourists.  Lijiang was built for commerce about 800 years ago, and a commercial city it remains. Once a crucial trading post on the ancient Tea and Horse Caravan Road connecting Yunnan Province and Tibet, it now caters, in large part, to tourists from Beijing and Hong Kong."
so you now know you are in for a treat as our time there unfolds!
Posted by TOR at 5:06 PM