a new place for dinner

Last night - after two weeks of horrible crowds and cranky servers at places surprisingly overwhelmed by tourists for the extended holiday weeks (the holidays falling on Friday seemed to have something to do with it) we thought is would be OK to venture out on Sunday night expecting most of them would have left.

We decided to try a new-to-us place in downtown called Duval's Fresh Seafood.  It sits near the foot of Main just up from the traffic circle by the Opera House.  We made a reservation and arrived a bit early but were seated immediately.  We had called ahead to check on corkage fees (which were reasonable) so we brought our own wine.

The waitress was very solicitous and brought warm bread right away along with wine glasses.  But it went down hill from there.  We had read reviews online and were looking forward to a lobster bisque which was recommended across the board.  The weather had turned cool on Saturday and so on Sunday night we were in long pants (aaacccckkkk!!!!) and wanting to taste the lobster bisque to see if it could unseat the decades long supremacy of the bisque at AMOB (Anna Maria Oyster Bar.)

So when we both ordered the lobster bisque the waitress explained that they were out of it and then went on to explain in GREAT detail why it was so good- LOL (thereby only making us feel worse about it.) We had to prompt her about whether there were other items they didn't have -and yes they were out of two of the three fresh catch of the day fishes and no they didn't have another well reviewed appetizer the ribeye spring rolls and they had no more pork tenderloin.  Mind you we still hadn't gotten to the eight o'clock hour at this point. It was roughly 7:35.

So we both ordered mussels to start (which were the nice smaller shelled PEI mussels) but the sauce didn't seem all that flavorful, lots of garlic but not well balanced somehow.  However, as noted the mussels themselves were excellent.

During our wait for the appetizers the waitress came back and informed Phil that the Seafood Bouillabaisse described as: "lobster, shrimp, calamari, mussels, and local gulf fish in a roasted fennel and tomato broth" would be without the lobster because they had run out but that the chef would add scallops or extra shrimp or both, if he wanted - he chose both.

I ordered the cobia special pan seared accompanied by risotto with spinach. The cobia was supposed to be served in a lemon buerre blanc sauce which seemed to have been rationed.  The fish was well prepared but the risotto was gummy instead of creamy.

And when they brought Phil's bouillabaisse it turned out to be with lobster. According to the waitress, another table had gotten fed up in trying to order things and left - and the lobster reserved for one of those patrons had then gone into Phil's dish... along with the promised extra shrimp and scallops LOL- except there were NO scallops in his bouillabaisse....

We had read good things about the bread pudding dessert and decided to split one - and it was the best dish of the evening.  To give them their due the manager came over and asked how they had done and we were completely open with him about our problems with the meal.  We had already had a discussion about whether to return or to write them off.

I had voted to return given how awful the last two weeks were everywhere.  We actually left our very favorite place at lunch one day and took carry out from the market to eat at home.  Another night an outdoor table that was "no problem tonight" when we called an reserved for dinner- disappeared so we had a 25 minute wait in the bar after our reserved time. It has just been crazy. So I was willing to return but Phil said there are so many good restaurants why waste the time coming back to an OK place that is out of multiple menu items at by 7:30 PM?  He had a point.

We related the issues with the meal to the manager and he asked us to please come back and give them another chance and comped us for both the dessert and the corkage - which was very generous of him.  That said, we probably won't put this one at the top of the list- I will make sure we go back but it won't be anytime soon.  Sadly this isn't a place that was just having a shakedown after a recent opening- this is a top place in town and has been for a number of years.

a few photos - of course- 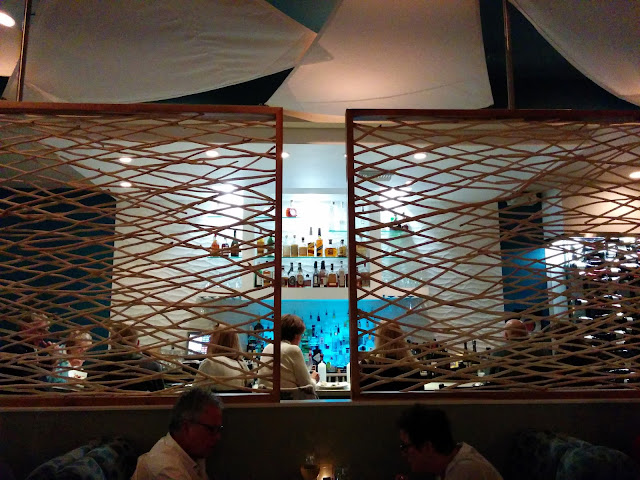 We did have a terrific old chard from Rollin Soles days as the winemaker at Argyle- 2001 and still vigorous with perfect acidity- only a tiny trace of being maderized just enough hint at a roundness to balance the acidity.  Really good and the second wine of Rollin's this week that we have raved about. 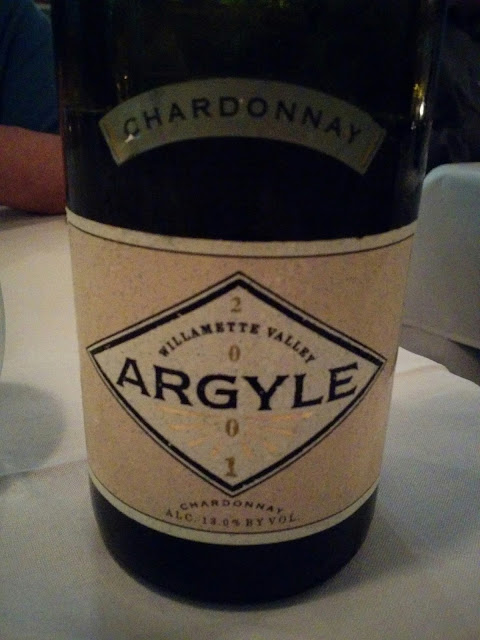 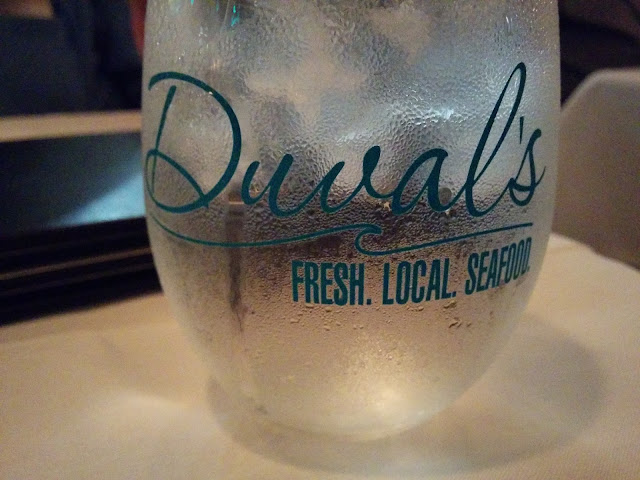 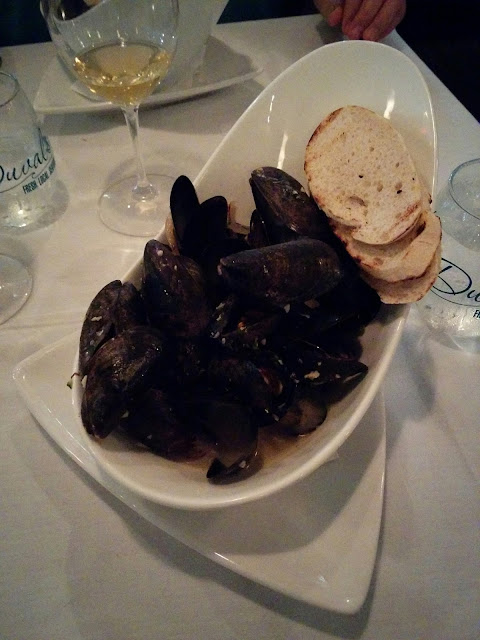 the cobia- which in the photo looks well enough sauced but I think it got lost in the gummy risotto...and this may just be a cook's style difference because I make a pretty mean risotto and I tend to make mine creamier than this unless I am using it as a base for etouffee or a gumbo or something more liquid based.... 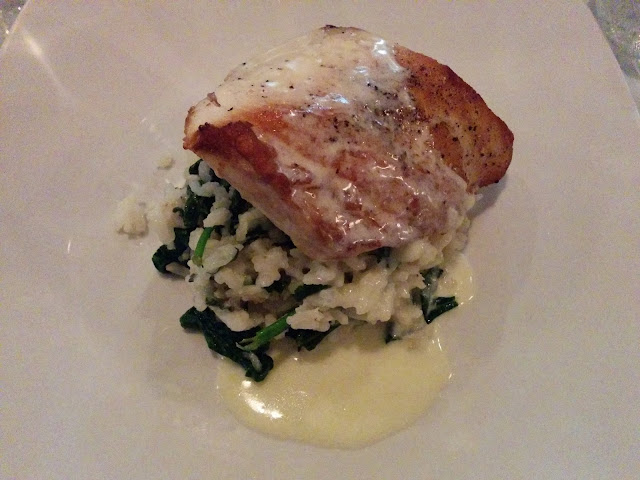 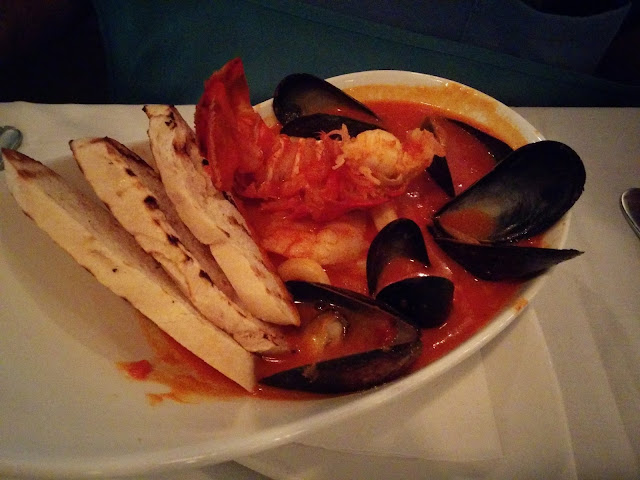 "DUVAL’S SIGNATURE BREAD PUDDING A not so traditional bread pudding made with a trio of danishes  and baked to order producing a soft warm inside and crispy outer shell! This award winning dessert is served with house made chantilly whip cream!" 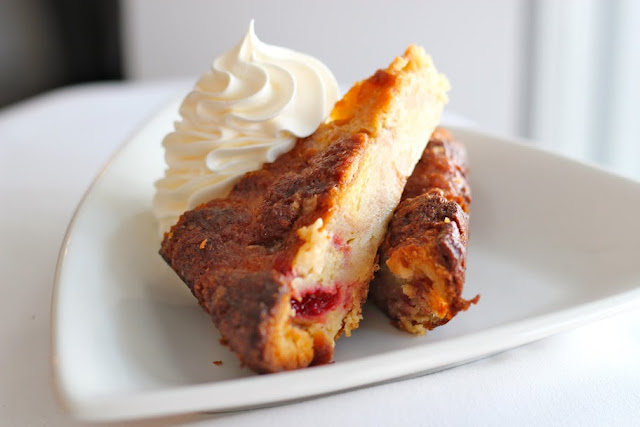 so a big MAYBE on this one- I would like to return and give it another shot because I think it had potential - we'll see if I can convince Phil to go along with that plan... so back to Cuba posting- coming up our fabulous evening in Muraleando, a Havana barrio.... where this terrific community art project and community center has been developed/constructed over a decade of work by the dedicated neighborhood residents.
Posted by TOR at 11:03 AM