our week in review

so it was a full week - in the time before classes start for the term (next week) - but the weather was extremely changeable.

on Monday we had Yummy House Chinese -you have to reserve more than a week in advance LOL- there is a dearth of good Chinese food here so they are in demand... actually there is a dearth of good ethnic... we eat a lot of fresh seafood but miss real Thai, Mexican, Vietnamese, Bosnian, Chinese, Korean - this is just not urban enough for authentic ethnic... soooo- stone crab claws anyone??? LOL we are hardly suffering despite the area being seriously lacking in immigrants.

We do have a terrific Philly Cheese Steak place LOL- guess those folks know an appreciative audience when they see one.. this little (seats 30) storefront does a bang up business between 11 and 8:30 their hours.  We also have issues with the hours here- although we never have competition during the hours we would generally be eating - we also find ourselves on the cusp of closings with regularity.  So while we love our winter home in the sunshine, with its white sand beaches and dockside eateries, this will never be our summer location- we go to the city for all it has to offer, the stunning lakefront -the vibrant nightlife and ethnic food!

However, one thing we can say for certain is that our winter home is no slouch when it comes to arts and music and theater - what it lacks in food options it certainly makes up for in culture.  This week we saw The Liar (reviewed in a prior post) 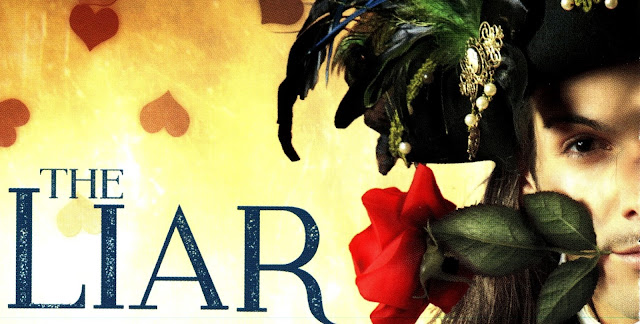 We also went for our first concert of the symphony -Sarasota Orchestra with their real "catch" of a conductor, the amazing Anu Tali.  We heard an outstanding concert which included a piano concerto Rachmaninoff and Tchaikovsky - here is the evening's list from the program. And yes- we have a brilliant and world renown symphony in Chicago which is not a mere five minutes from our house with free parking- LOL- to say nothing of the schedule conflict of their "year" versus ours.  Most of our local cultural options are less than 20 minutes away. And yes I know this sounds incredibly lazy but access is one element of getting folks out to such events. And we chose the Sarasota area for our winter residence BECAUSE of the cultural options. Just as we choose Chicago for our summer residence for its dining and nightlife options.  We get "the best of all possible worlds" and can live like Candide- LOL 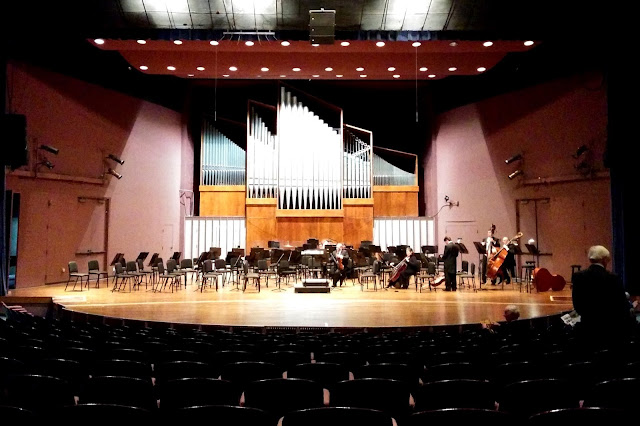 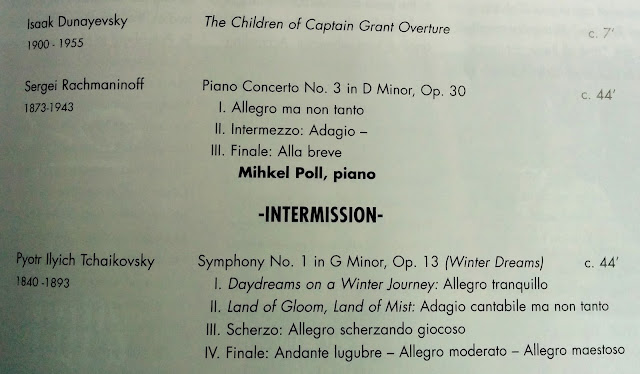 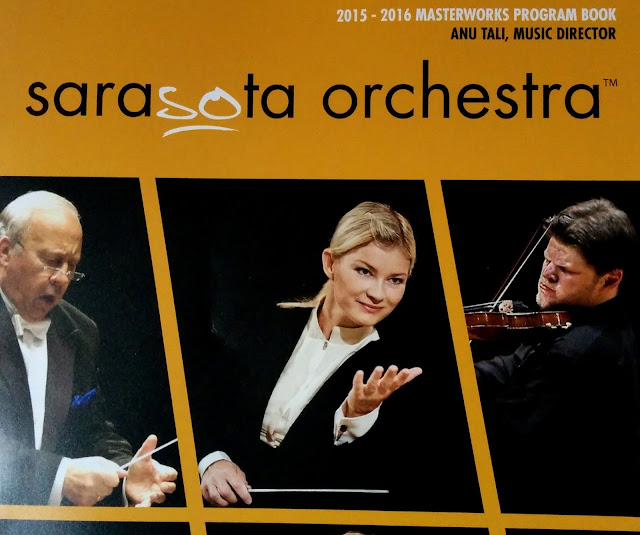 Then just yesterday - completing our week - we saw another production from National Theater Live -this time the Beaux Stratagem.  Absolutely smashing! what a happy accident!  As a member of the Ringling Art Museum, emails keep us abreast of offerings there and yesterday they were broadcasting the National Theater Live of this terrific production from London at the Historic Asolo Theater in the Museum complex, so we snagged tickets and were thrilled by the show.  A Restoration Comedy by a guy who died in like 1707 before the play was even staged and just after he finished writing it... 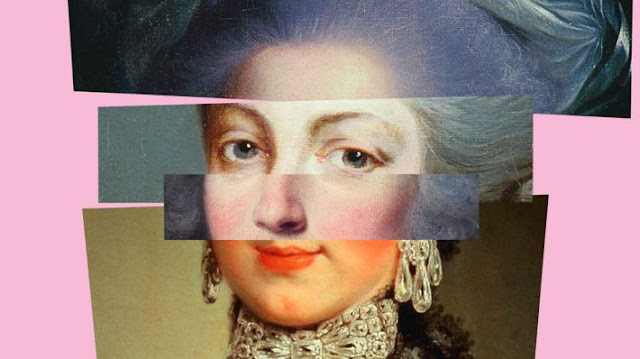 The Beaux' Stratagem is a comedy by George Farquhar, first produced at the Theatre Royal, now the site of Her Majesty's Theatre, in the Haymarket, London, on March 8, 1707. The Beaux' Stratagem is one of the last Restoration comedies, before the genre was replaced by a new style of more mannered comedy. In a few years, The Beaux' Strategem would have been considered somewhat immoral, notably Farquhar's cynicism about the charms of matrimony.

The ‘Beaux’: Mr Aimwell and Mr Archer, two charming, dissolute young men who have blown their fortunes in giddy London. Shamed and debt-ridden, they flee to provincial Lichfield. Their ‘Stratagem’: to marry for money.  Lodged at the local inn, posing as master and servant, they encounter a teeming variety of human obstacles: a crooked landlord, a fearsome highwayman, a fervent French Count, a maid on the make, a drunken husband, a furious butler, a natural healer and a strange, turbulent priest.  But their greatest obstacle is love. When the Beaux meet their match in Dorinda and Mrs Sullen they are most at risk, for in love they might be truly discovered. George Farquhar’s final play is a fabulous carnal comedy.

Aimwell and Dorinda become engaged to be married at the end of the play, in accordance with the rules of the genre, in which young lovers always get married in the end. However, Farquhar uses Kate Sullen to criticise this facile outcome. She, originally rich in her own right, is trapped in a loveless marriage to a man she despises, who keeps her from the town-based society she adores. The legal system does not allow divorce based on incompatibility, and any divorce at the time left women disgraced and penniless. The dark side to the play produced by this theme threatens to overwhelm the rest of it, and Farquhar has to resort to a deus ex machina character and an arbitrary adjustment to English law to get out of the hole he has dug for himself. Noticeably, even when Kate's separation from her husband seems an accomplished fact, the possibility of marriage never seems to cross either her or Archer's mind.  (above in blue from various websites when searching the play's title and edited to be more concise) 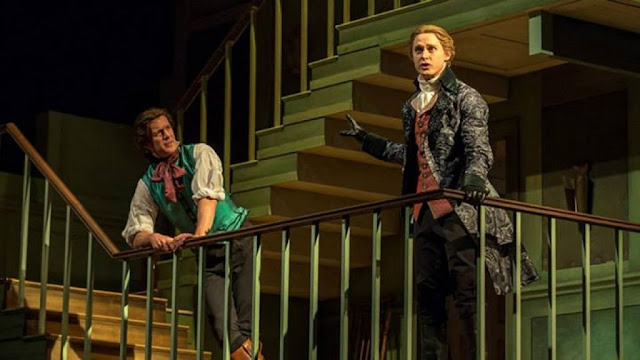 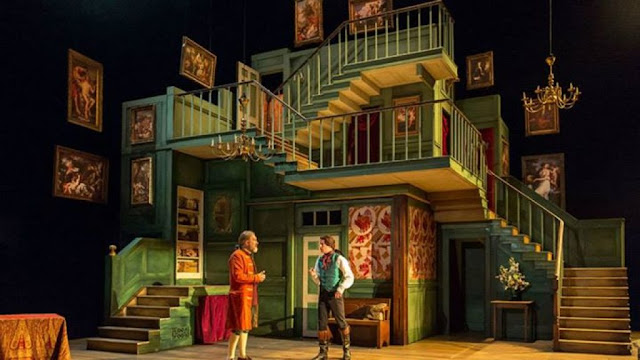 the bandits plotting (in rehearsal) 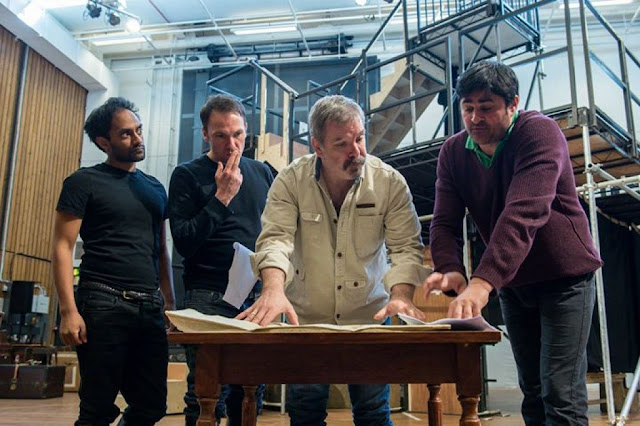 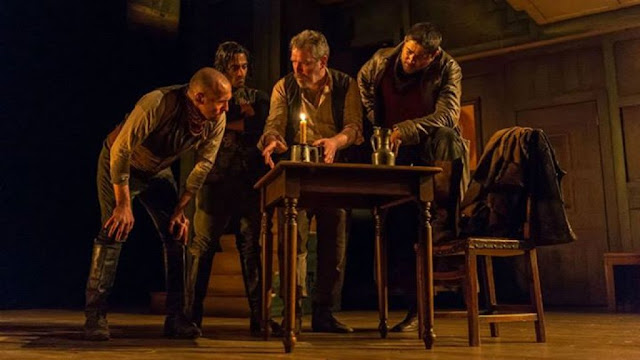 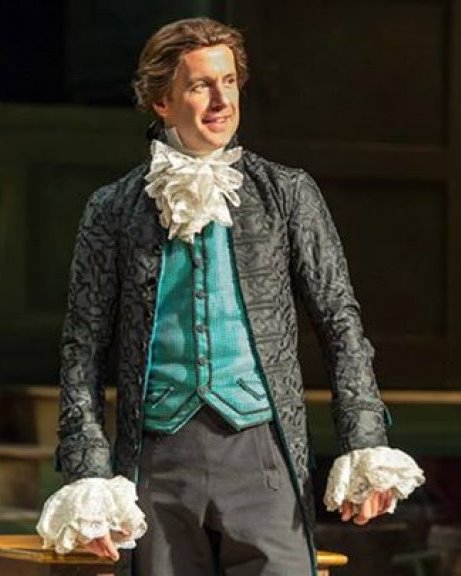 here's the cute beaux in real life- still cute LOL and made cuter by how much fun he was having in his role- actually they were all having a "jolly good time" and so were we! 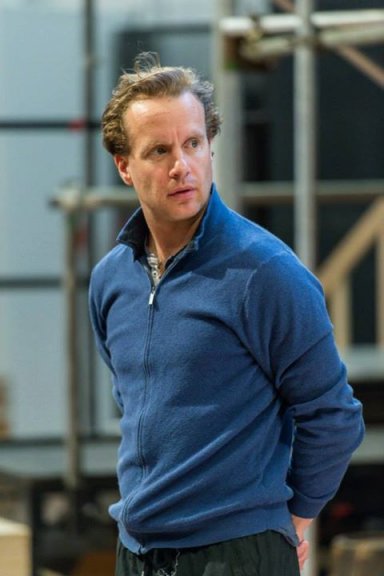 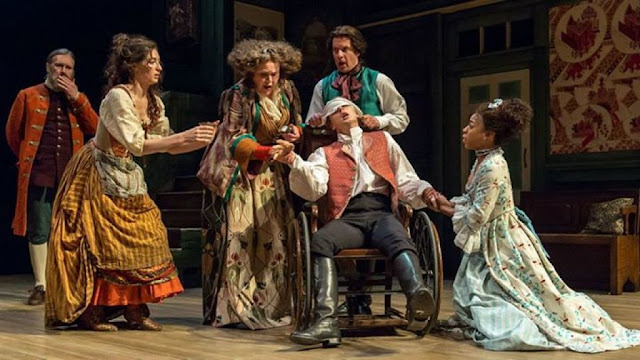 I think the link above will take you to the trailer- and the great news is all you need to do is check the National Theater Live website to see when it may be playing at a simulcast theater near your location!  Totally worth going out of your way to see it!

And today for lunch we tried a new place for lunch- one that got a decent review recently in the paper when it opened but was a big disappointment- it is called the Ugly Grouper- and so we went for grouper sandwiches (which they curiously did not have - it was crossed out on the menu- and the serve made some lame excuse about they don't have storage space for grouper filets even though they have grouper...bizarre) so we ordered grudgingly the grouper tacos - which might have been OK except they were stuffed with cabbage! since when do tacos have cabbage instead of lettuce? forewarned! they look good but tasted more of cabbage than any other ingredient... 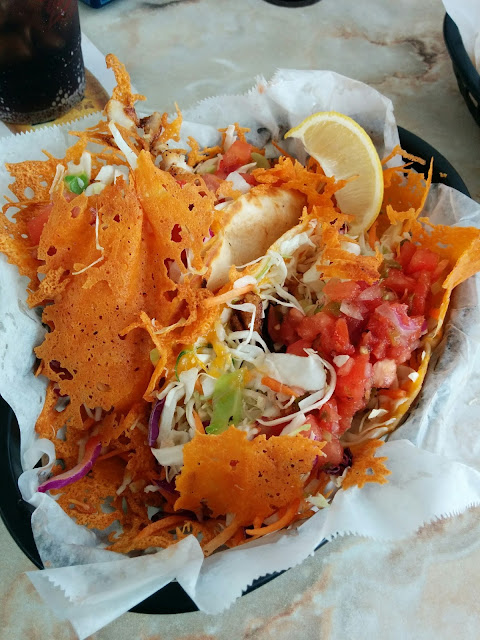 so we drown our "sorrows" at the indifferent meal by going to the fish market and buying stone crab claws and ahi tuna for some claws and poke for dinner! Can't go wrong there! And now back to Cuba and on to Cienfuegos where we hear angels.
Posted by TOR at 4:21 PM