The Liar at FSU Rep

Last night we saw "The Liar" at the FSU Conservatory in the Asolo complex. I thought it fun and entertaining, Phil found it trite, predictable and a waste of his time.  I will give him this- the student performers were somewhat less than smooth in the iambic pentameter verse of the dialogue but it was funny and they were clearly having a good time which was infectious for most of the audience - many laughs and much applause for a company undertaking such a challenging project. 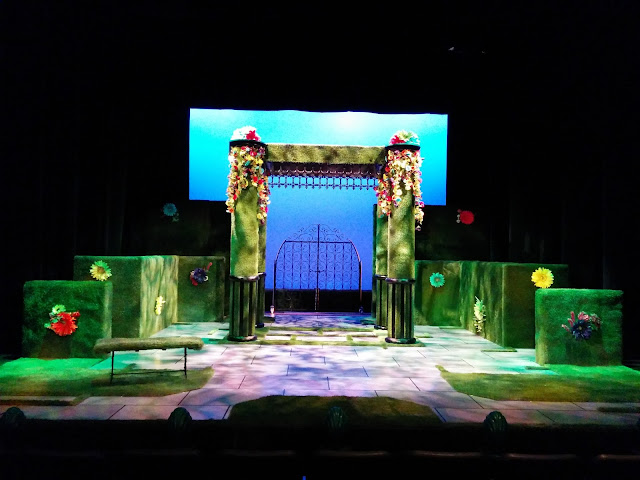 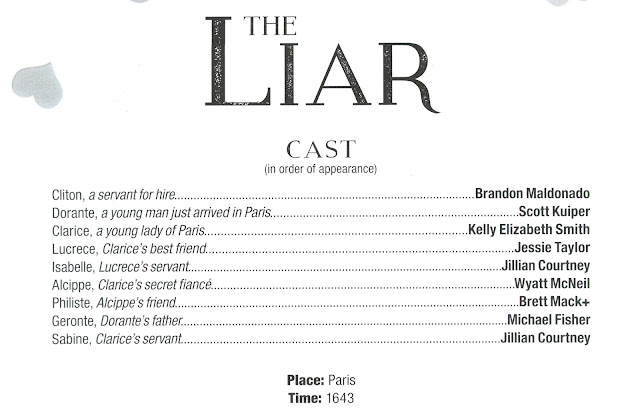 From reviews of prior productions- "THE LIAR and its mischievous adapter, David Ives, want you to savor every meticulously groomed conceit, every stylishly turned-out couplet, every assiduously manicured joke…Ives is an inveterate jester, a trait that serves him well on an evening that is all jest." —Washington Post. "For Ives, one of America's better dramatic humorists, translating the fun of Pierre Corneille's 1643 French comedy was an act of respectful reinvention…The result is a scrubbed, vivacious script salted with hints of cheeky self-awareness." —DCTheatreScene.com.

THE STORY: Paris, 1643. Dorante is a charming young man newly arrived in the capital, and he has but a single flaw: He cannot tell the truth. In quick succession he meets Cliton, a manservant who cannot tell a lie, and falls in love with Clarice, a charming young woman whom he unfortunately mistakes for her friend Lucrece. What our hero regrettably does not know is that Clarice is secretly engaged to his best friend Alcippe. Nor is he aware that his father is trying to get him married to Clarice, whom he thinks is Lucrece, who actually is in love with him. From all these misunderstandings and a series of breathtakingly intricate lies springs one of the Western world's greatest comedies, a sparkling urban romance as fresh as the day Pierre Corneille wrote it, brilliantly adapted for today by David Ives. (above from the website Dramatists Play Service)

The Liar (French: Le Menteur) is a farcical play by Pierre Corneille that was first performed in 1644.  Dorante, the eponymous quasi-villain of the play, meets two women in the Tuileries in Paris, whose names are Clarice and Lucrece. He impresses them with his claim to have returned recently from the wars in Germany and boasts of the vital role he played. After they leave, he decides to court Clarice, mistakenly thinking her name to be that of her friend, Lucrece.  Géronte, Dorante's father, announces to his son that he has found a girl for him to marry (Clarice). Dorante, wrongly believing that the girl that he likes is Lucrece, concocts an outrageous lie that he is already married in order to avoid having to marry Clarice.  Meanwhile, Clarice is secretly engaged to Alceippe, who happens to be a childhood friend of Dorante. When Alceippe confronts Dorante in a duel, Dorante clarifies that he's not in love with Clarice, but Lucrece.  To build the plot, the authors throws in some hysterical side characters like Dorante's butler Cliton, and Clarice's and Lucrece's foxy lady maid, Isabelle who has a twin named Sabine.  After more fabrications and complications (Dorante revealing that his "wife" is pregnant), Géronte is infuriated to discover that he was lied to; Dorante eventually tells the truth and the plot is resolved happily. (wikipedia summary) 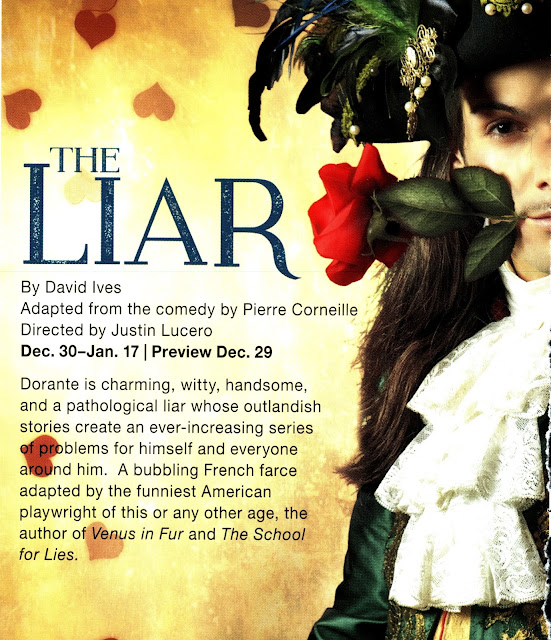 I had seen the School for Lies production a few years back and enjoyed it - I forgot Phil had still been in Chicago.  Farce is never his thing - he finds it annoying mostly although I don't exactly know why.... So take someone who is looking for a light and frothy evening - with the usual mistaken identities of the period and the usual happy ending of multiple marriages - and enjoy yourselves!
Posted by TOR at 5:13 PM