last night we went to see a new play at the Remy Bumppo theater company- a new play to them but an older play to Americans- by our own Nobel prize winning playwright Eugene O'Neill...

I can't even begin a review of any note except to say that the play contained only a single likable character and actually had a couple you wished to have perish (which they obligingly do at various times in the three acts.) 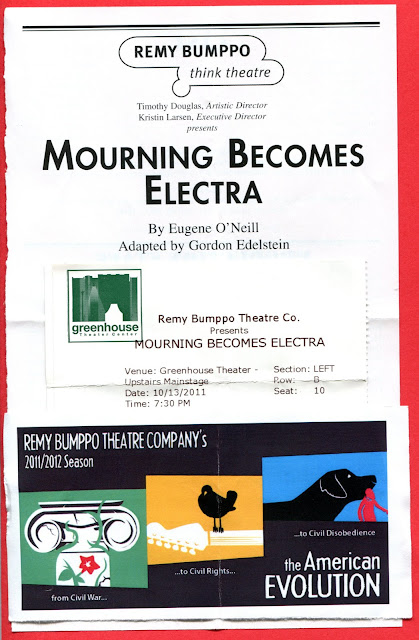 the story revolves around an amazingly dysfunctional family in New England at the end of the Civil War.  the main characters include a hateful spiteful revenge driven daughter Lavinia and her almost as horrible mother Christine, Christine's other child Orin - a wimpy whiny baby of a boy who "suffers' from the ghosts of the "rebs" he killed in the war (OK so we will give him the ghosts) but his unnatural affection for his mother and then later his sister (really unnatural as in sexual) is beyond the pale - the father/husband is a General who may or may not lay traps for his treacherous wife- who ends up killing him which leads to the son killing the mother's lover (and the unrequited love of the jealous sister/daughter) which leads to the mother killing herself and the brother killing himself and then finally the hateful daughter killing herself (but not until after she confesses tha she has "sinned" with a south sea islander while away with her brother after the deaths of their parents and their mother's lover) did I mention the son/brother killed him? LOL

if this sounds like a big swamp of dysfunction - it was... the good news is that the actors did a fine job the bad news is that the play is so awful about a third of the audience left at the first intermission and another third at the second... which is sad because it is not the actor's fault the people they played were so distasteful.

so my review is a thumbs down on this one.  LOL- and apparently it is not just me- here is a review from the NYT in 2008 of another company's re staging of the play

"There are bad nights at the theater, and then once in a blue moon comes a lulu like the revival of Eugene O’Neill’s “Mourning Becomes Electra, four hours of quicksand from which you begin to fear you will never, ever escape."

at one point Phil turned to me and said "what a nightmare" -  LOL so I guess our perspective was not as unique as we feared...
Posted by TOR at 8:28 PM