back to the day

that started in the art museum...

after we finished there (no photos- unfortunately because they had some wonderful art and no postcards to speak of so you couldn't buy reproductions of most of the work in the museum) we headed out of town to visit an organic farm nearby.  in the "special period" after the fall of the Soviet Union and the withdrawal of its support of the Cuban economy, gas prices rose sharply and the Cubans had no way to transport food to market from the distances they had previously.  The solution they found was to start farming land closer to the cities (especially Havana.)

These farms were set up on plots of land slated for development that hadn't yet happened.  the one we visited was supposed to become part of a large sports complex. they became organic for two reasons - first the lack of chemicals available for pest control and fertilizer and second the farm's proximity to the large population in the city nearby.

the farm was run as a co-op and profits (which were good by Cuban standards) were shared amongst the members based upon their accumulated time of membership (seniority) and any individual capital contribution made in the start up. the farm grows food and plants for landscaping and plants used for medicines.

here are photos of the farm activities - all done by hand basically... 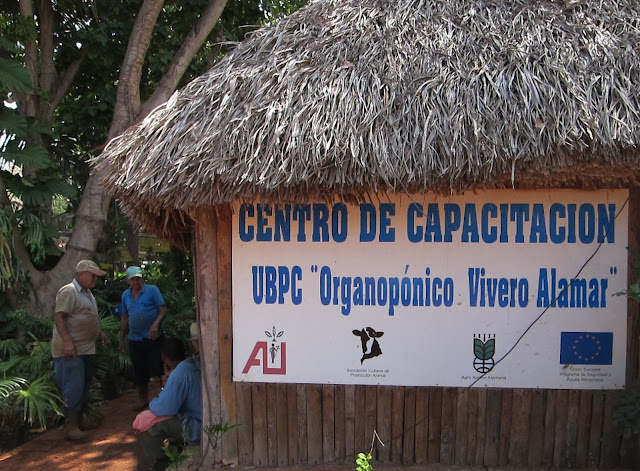 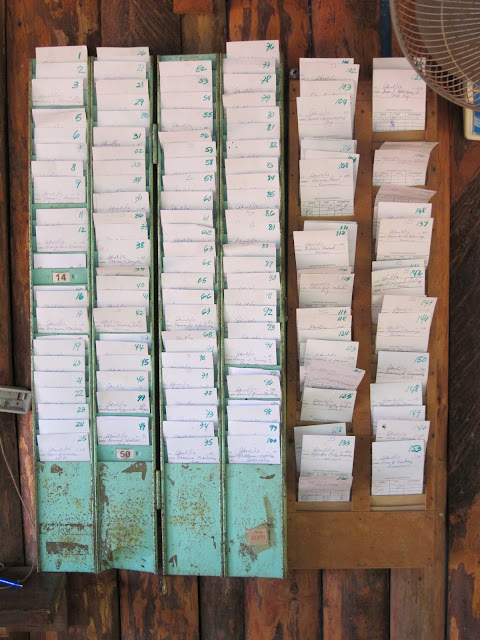 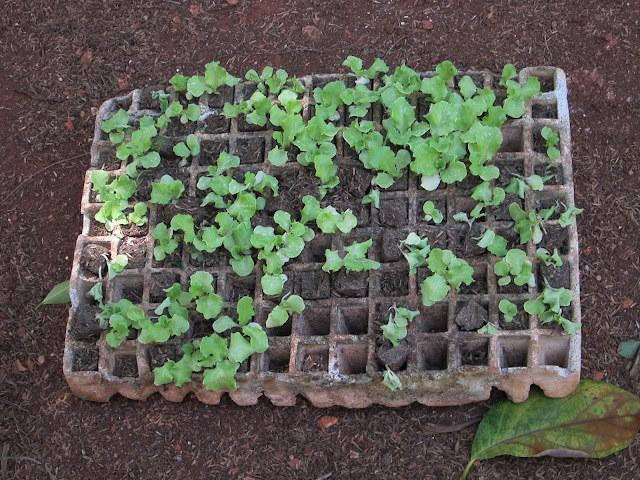 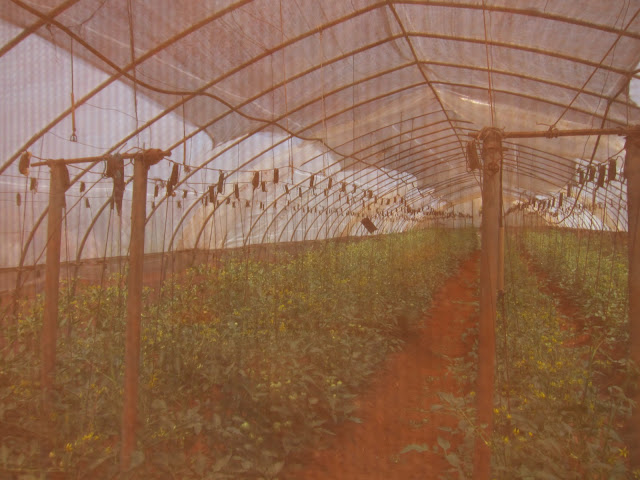 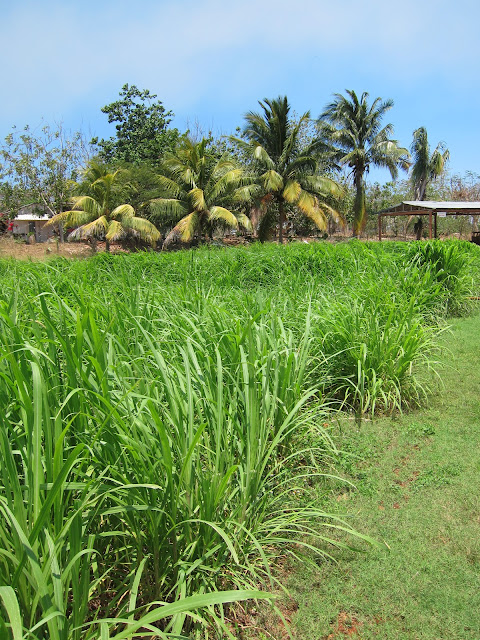 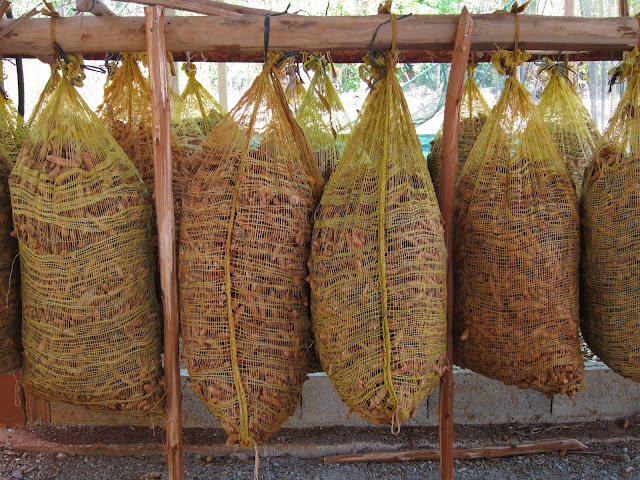 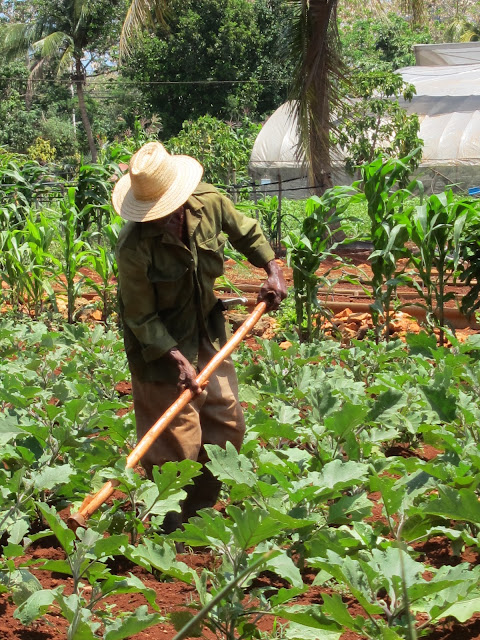 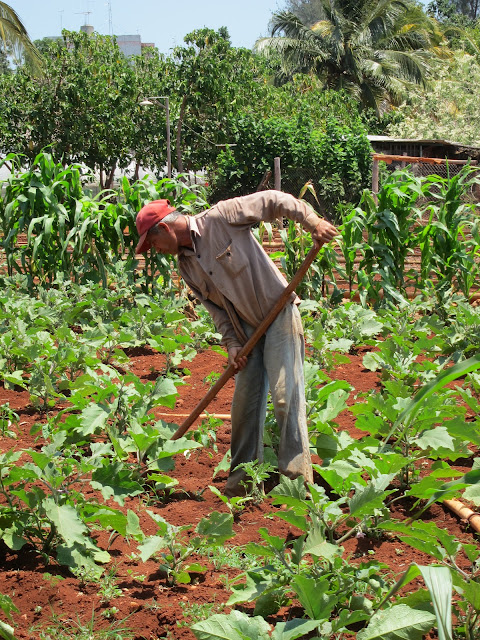 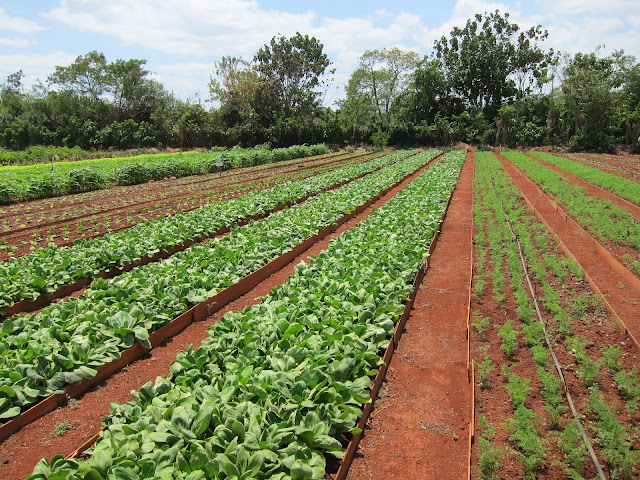 after our visit to the farm we returned to town to visit one of the synagogues- the sephardic one- there is also an ashkenazic one (allegedly more affluent- LOL) - here we were given a short lecture on the history of the community and where it stands now (rabbi twice a year from south america) and then saw a small exhibit on the holocaust that had been recently installed. 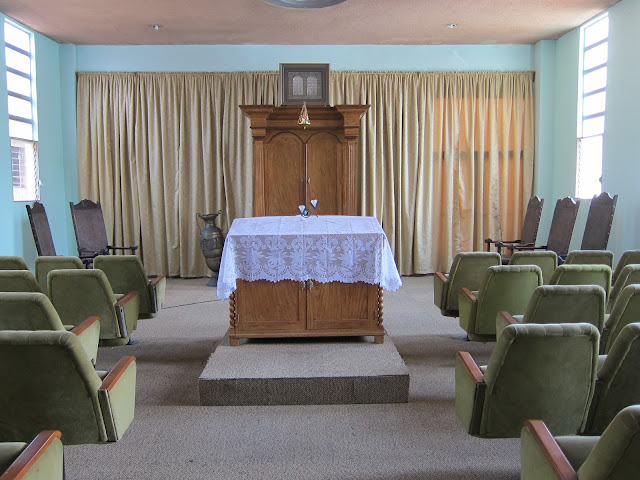 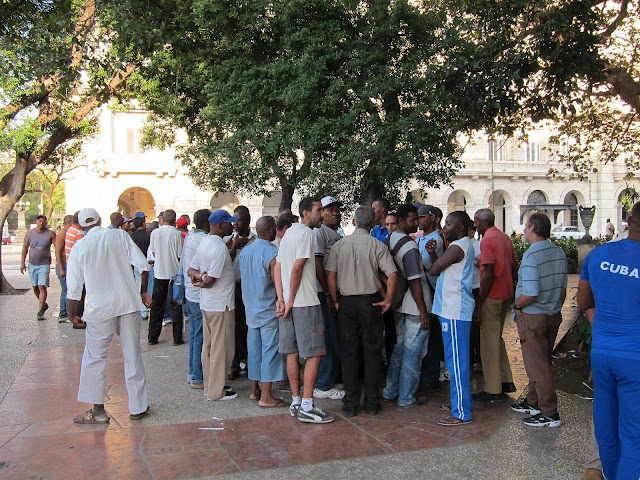 below- ladies on a balcony of a building in fairly good repair in Vedado... and their neighbors crossing in front of the faces of the ubiquitous Che along with Camillo Cienfuegos and another revolutionary who might be Frank Pais who died in the November 30th strike/revolt - which was the day Castro's Granma yacht was supposed to be arriving in Cuba but was delayed until 12/2. my professor said Pais- had he lived might have become the face of the revolution instead of Fidel... history often gets made on "a simple twist of fate." 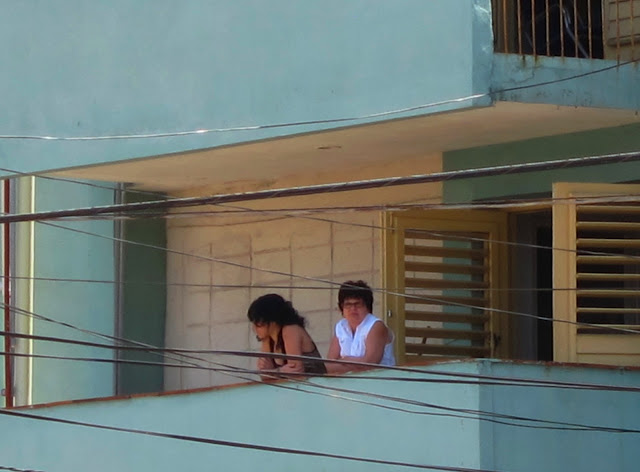 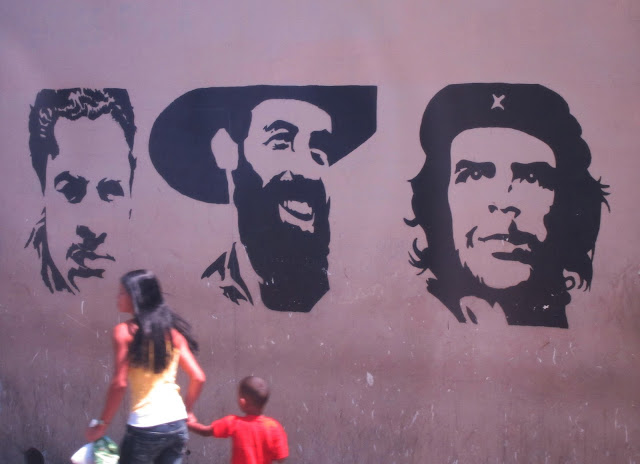 later that evening we went to dinner at a paladar (a private home turned into a restaurant by the family) an entrepreneurial venture that helps people make ends meet and helps the tourists find decent meals... this one was apparently written up in the NYT recently - the food was excellent - Jennifer's dish is the one in the photo below (it sounded like it was going to be a stuffed pepper from the way I read the menu - LOL- but it was very tasty so expectations were not relevant to the actual reality...LOL) 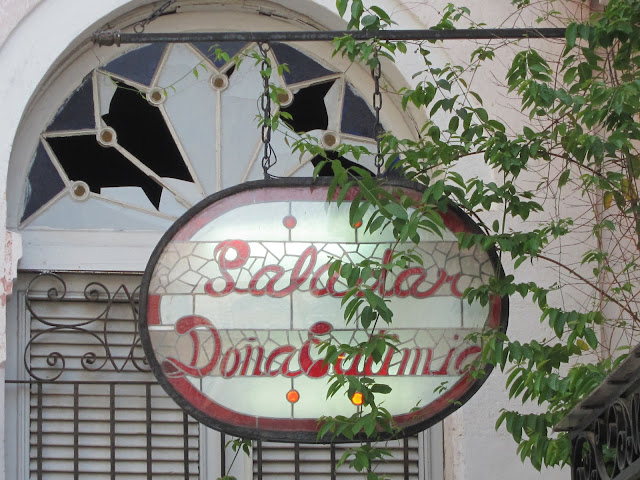 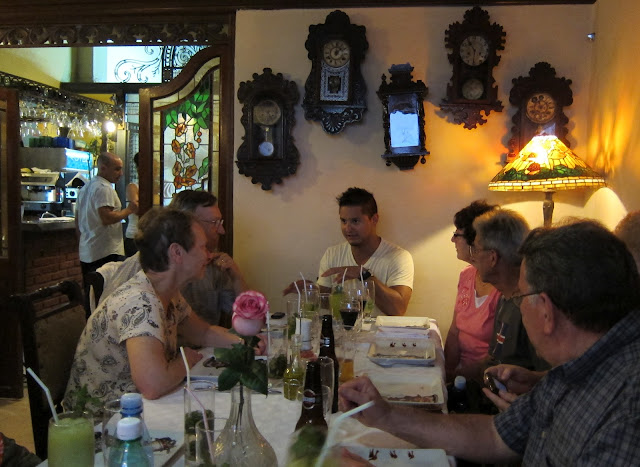 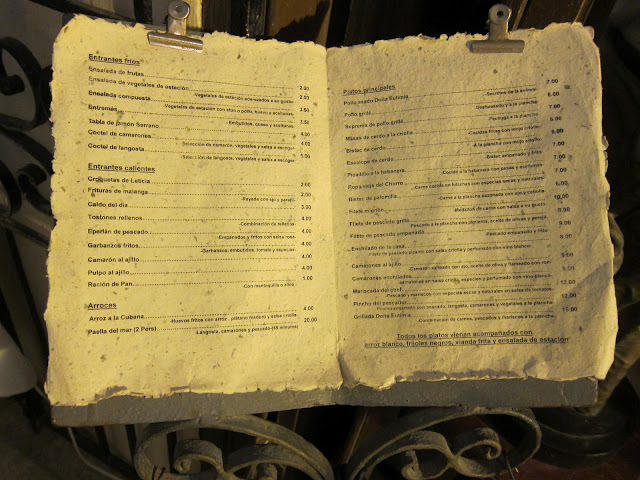 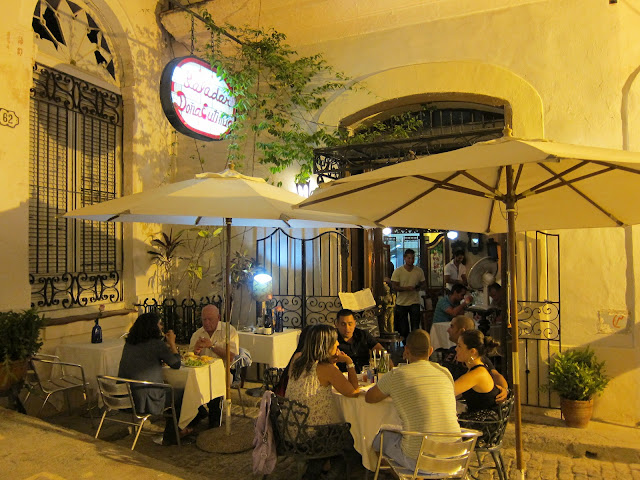 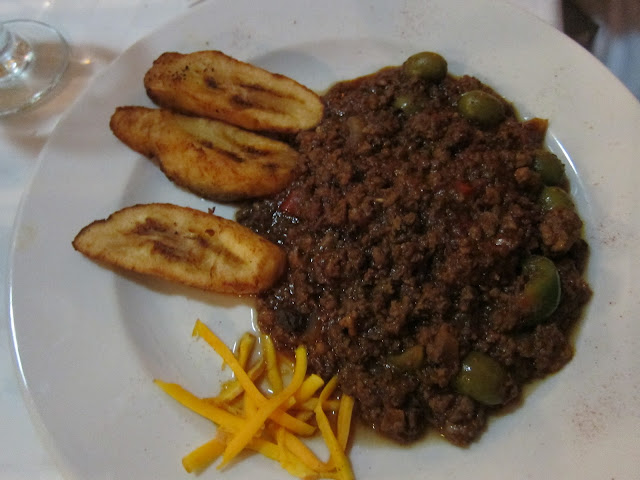 and then some more cars for those of you who want to see them- I was lucky enough that the one car of the three in the second to the last photo was coming into the curb so I got a close up of her beautiful "face"! 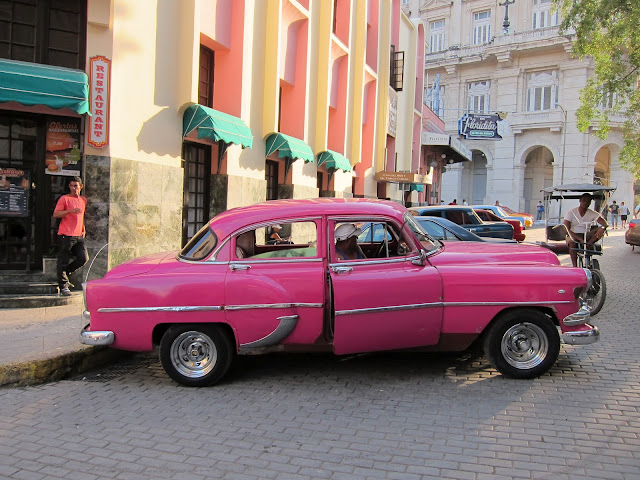 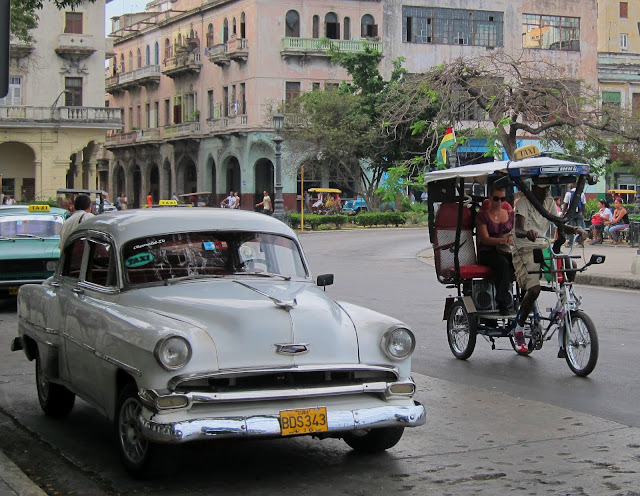 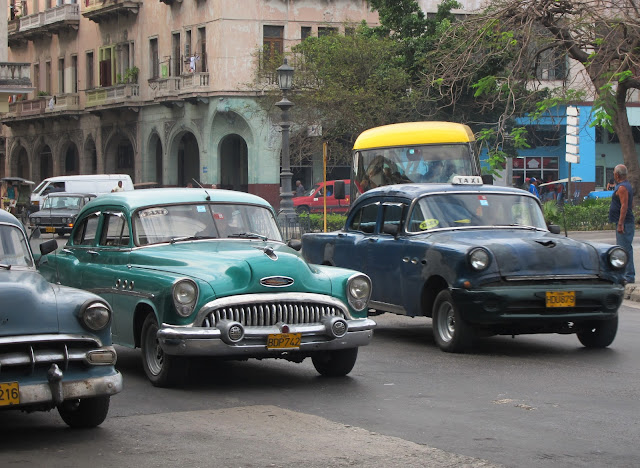 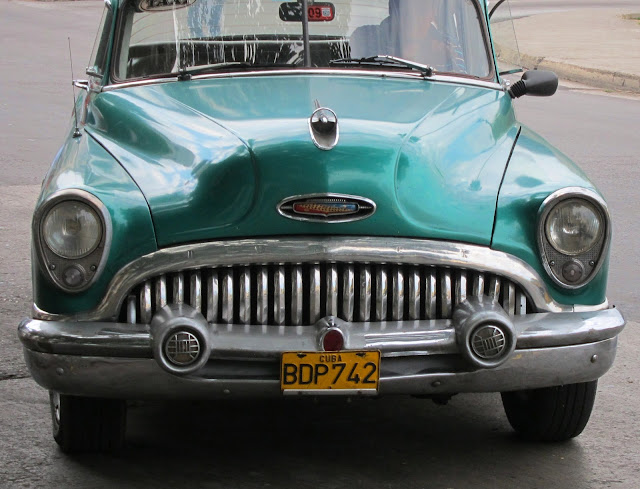 tomorrow we leave for Cienfuegos in central Cuba on the southern coast of the island.  did I mention the island is HUGE - more than 775 miles across (more than the distance from NYC to Chicago.) so in our 10 day trip we only see a small portion of the country. but stay tuned (even if you have to use a reworked computer monitor as a TV set!)
Posted by TOR at 12:33 PM