I know , I know - I will get back to Amsterdam posting but we are in full swing here at home despite the weather not being summer in our summer home location-

last night and today we went to two new (to us) places to eat and found two terrific meals- these are not secret undiscovered places - we just hadn't gotten to them although they had been on the "list" for quite some time- in the case of MFK - more than a year....

here is what we had last night just around the corner from our place- a relatively new mex-korean taco place that replaced an excellent but never crowded mexican place that was just a cut above in both quality and price... not sure why it failed because it was really good - but the location is on a very busy part of a busy street and there is limited parking - crossing from the other side is a kind of "take your life in your hands" experience - so maybe that was part of it. And another thing is this location had NO outdoor space and a half a block away is a crappy Mexican place with a nice side street outdoor space that gets all the business. If you want to drink and sit outdoors on a nice day/evening the quality of the chips and salsa is less important than the drinks and seating I guess...

So back to TaKOs KOreanos - we were up for trying the place - and went early because we had tickets to the theater.  We arrived and each table was adorn with a giant salt shaker - this BYO place maybe is expecting a big call for salted rims? LOL... the very pleasant server came over with water and wine glasses and three sauces for the menu items.  She explained a  bit about the fusion aspect of the sauces and the food. And we started ordering.  We had read reviews online so we knew some things we wanted to try. 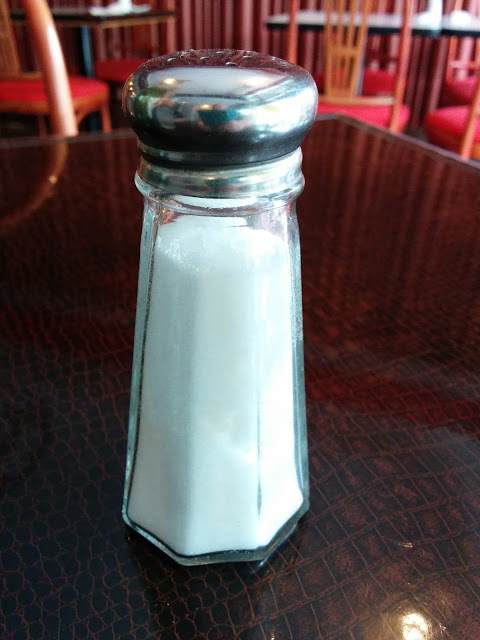 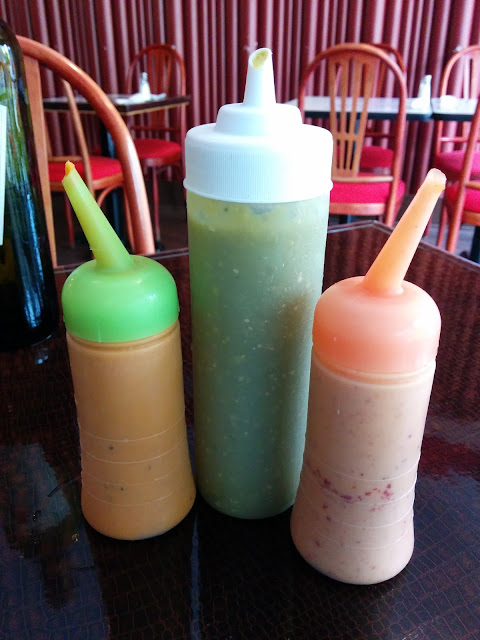 we began with the beef barbacoa fries- which sounded like they might be a wet mess but actually were not at all- instead they were fries covered with tasty beef  "BBQ" (as in Korean BBQ not Texas)
and a bit of cheese and scallions and sour cream... really excellent - although we did leave some of the generous portion of fries- 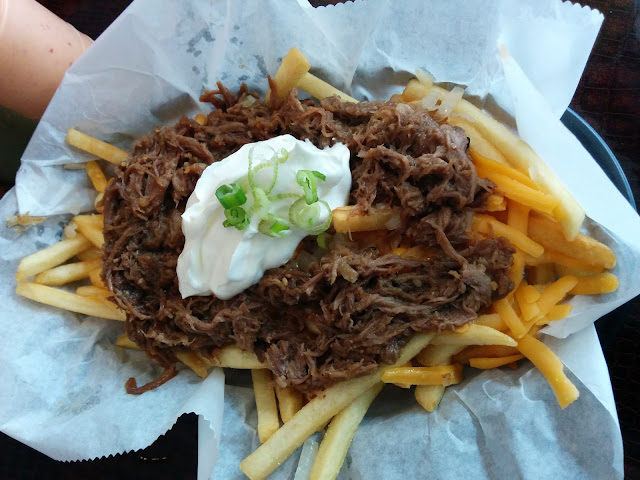 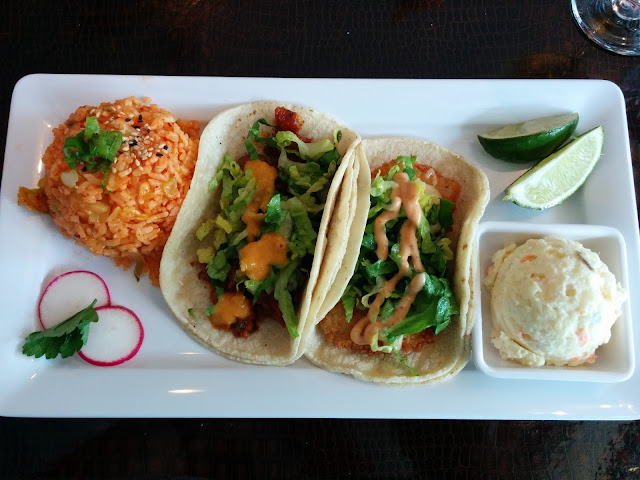 Phil had one extra kind of tacos but skipped the combo so he tried my rice (pronounced it flavorful) and then went on to order a quesadilla.  there were several choices but we settled on "two little pigs" made with spicy pork and pork belly - and they were truly yummy! 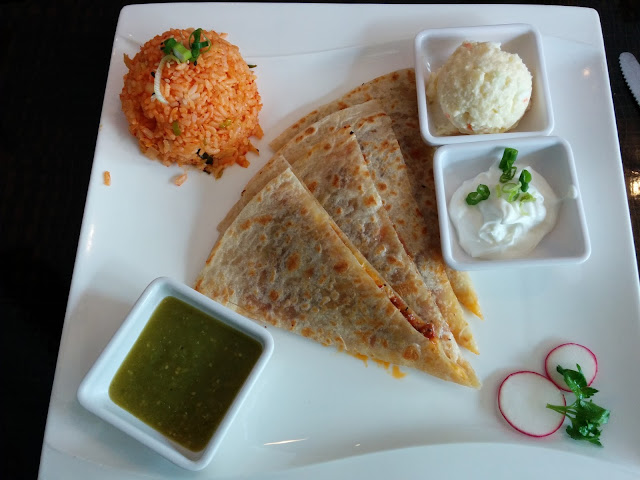 these came with the sour cream and verde sauce for those who wanted to give a try to the various flavor combinations and again - as a plate - served with rice and potato salad...

A place to return to sooner rather than later- really super addition to the hood- and they got smart and opened up the front so that there a few table in what used to be the window but now is indoor/outdoor space... so we had fresh air (except when the buses hovered nearby) and a less confined sense in the room.... we'll be back!

We went off to the theater were the play was mildly amusing with two performances worth remarking upon for their being exceptions to the over the top overacting of the rest of the cast.
However the logistics nightmare of the theater company was enough to give this place a serious thumbs down. Who sells tickets with seats, but then claim to have only general seating -  all the while actually reserving the seats one had purchased well in advance for a rather overwhelming crowd from a local nursing home???

I am all for getting folks out for the show- but NOT at all into buying seats that I chose and being told they don't do reserved seating even though we could clearly see signs on a third of the seats in the theater saying RESERVED. Seriously bad form Dead Writers Collective! - we will not be going back and would highly recommend you skip it as well- so much good theater in Chicago - why waste your time with people who treat you like this????

but enough of their boorish behavior - let's go on because we have only wonderful things to say from here on...

We had been meaning to get to the well reviewed MFK on Diversey for more than a year.  It has been on the top of my list - right above 5411 Empanadas. So when Phil said we should go out for lunch Friday I suggested MFK... so glad I didn't let this one fall off the list! We arrived a bit early and were graciously greeted. The place is in a hole-in-the-wall lower level on Diversey Parkway just off Sheridan Road and the northern edge of Lincoln Park.  It is nicely and brightly decorated with light colors to relieve the basement like feel of the place.  Table settings were also fresh with seersucker napkins and mismatched flatware. 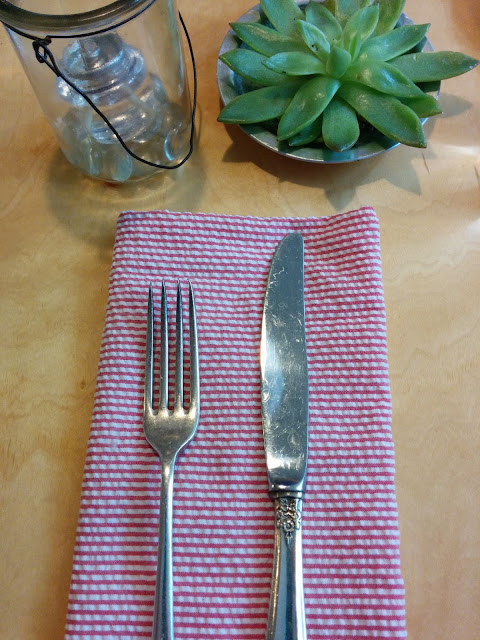 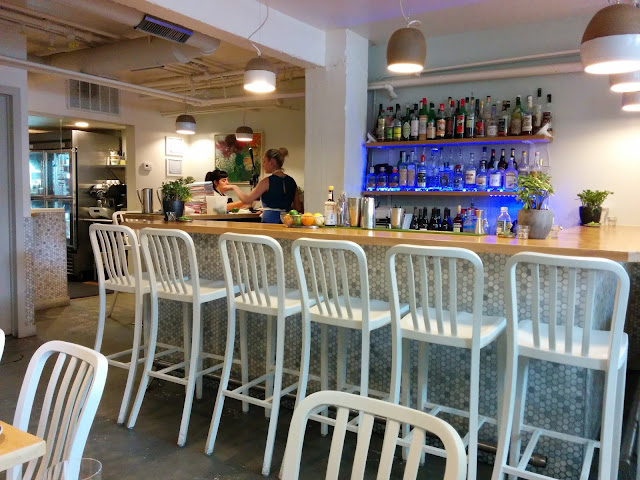 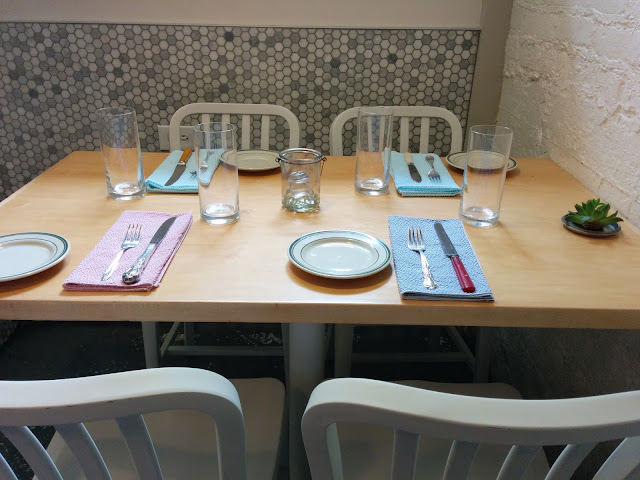 the floor was stenciled with ghost linoleum - which was pretty cool - 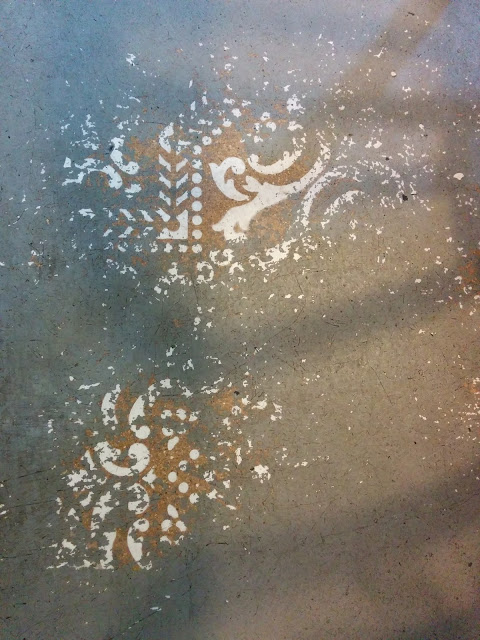 but on to the most important part- the menu and the food! 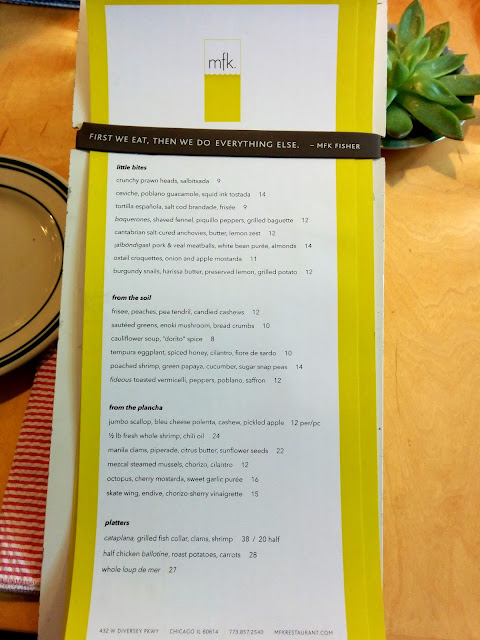 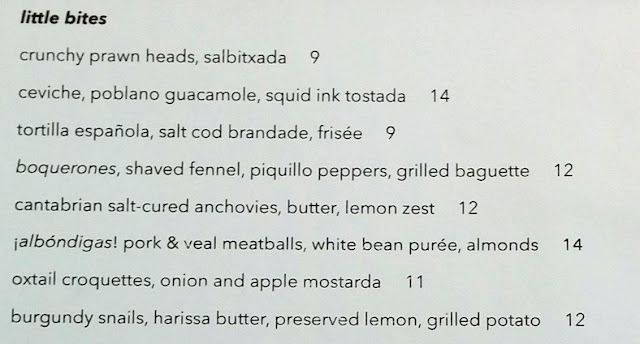 from the little bites we chose the croquettes, the albondigas, the boquerones and the ceviche 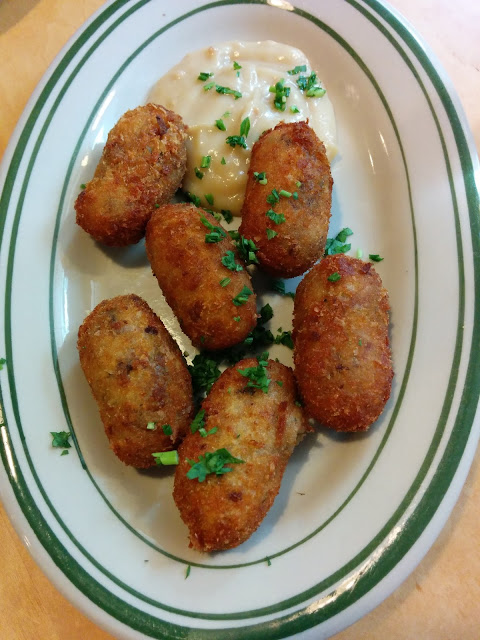 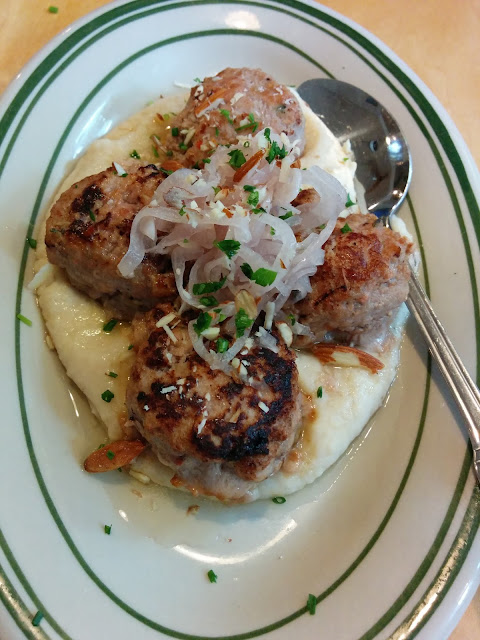 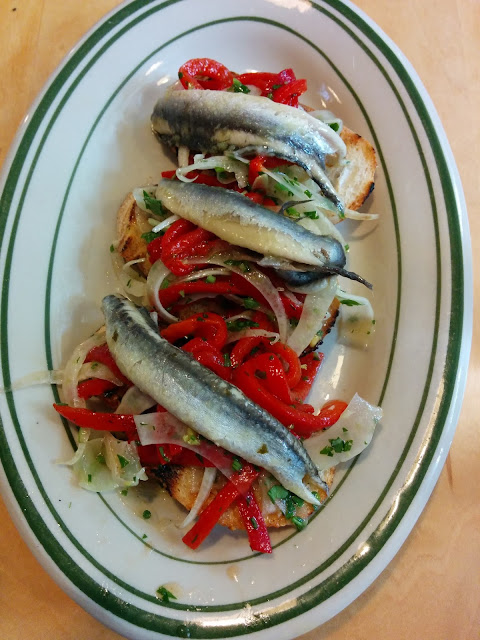 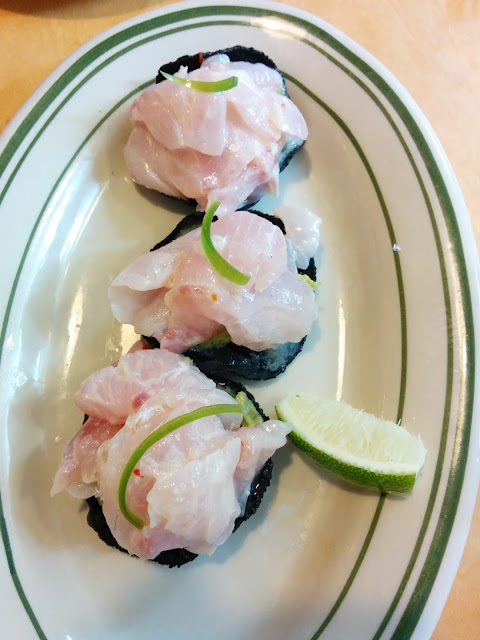 ALL EXCELLENT but the ceviche was the winner in my book- followed by the croquettes. 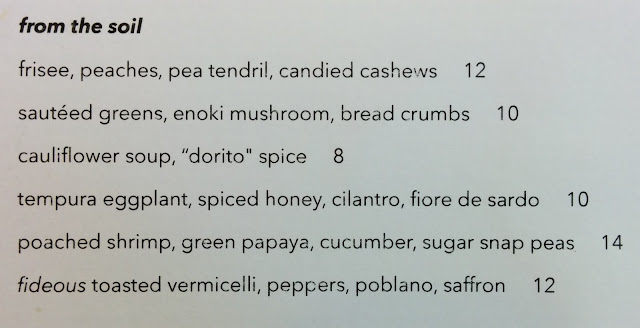 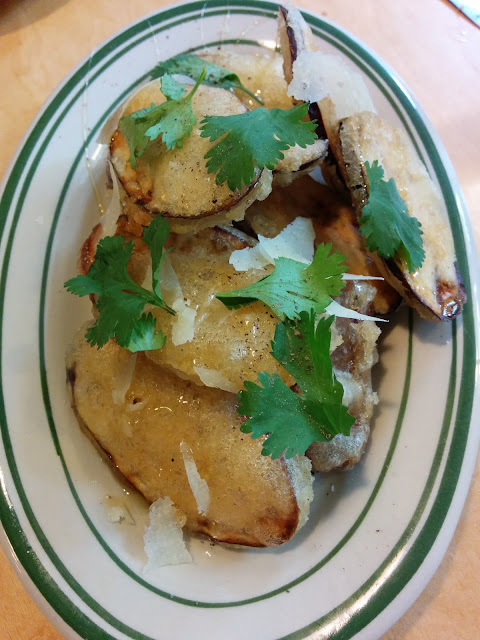 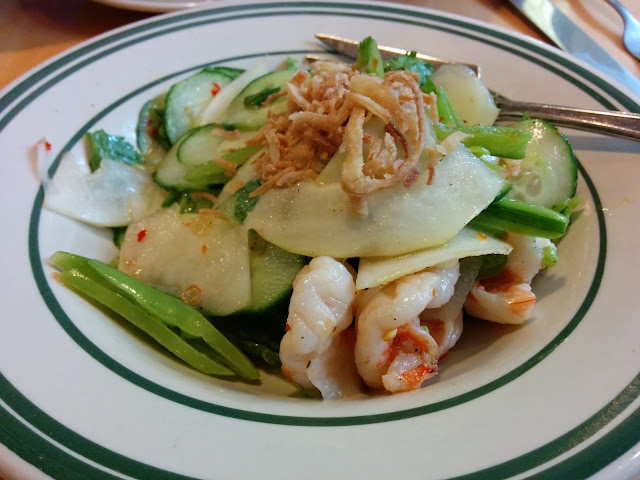 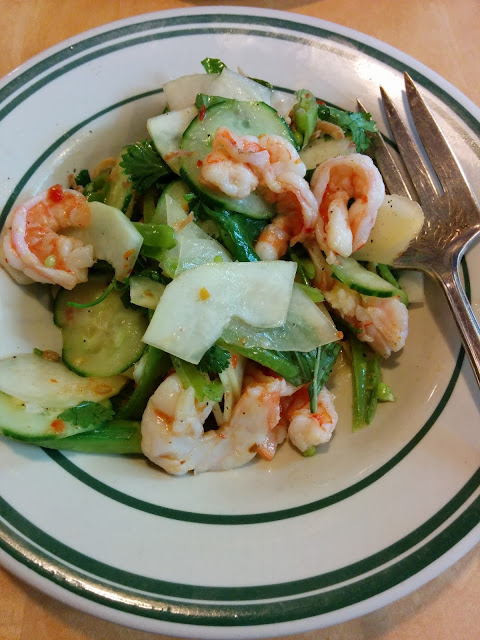 both winners again! From the next two sections - I chose the scallop on the blue cheese polenta as I was getting pretty full and Phil ordered the Chicken from the platters section - which he completely LOVED! 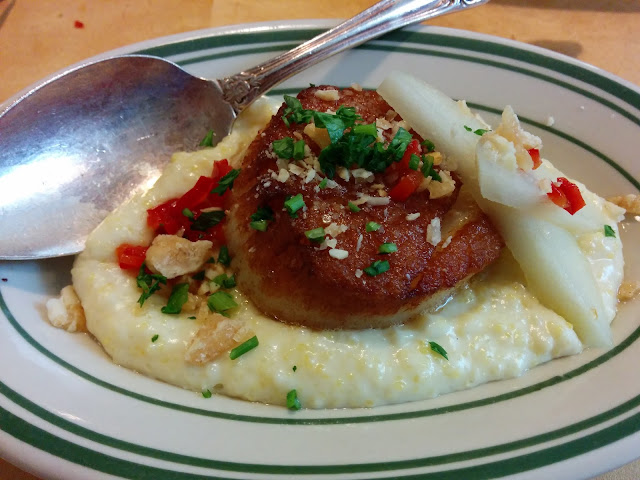 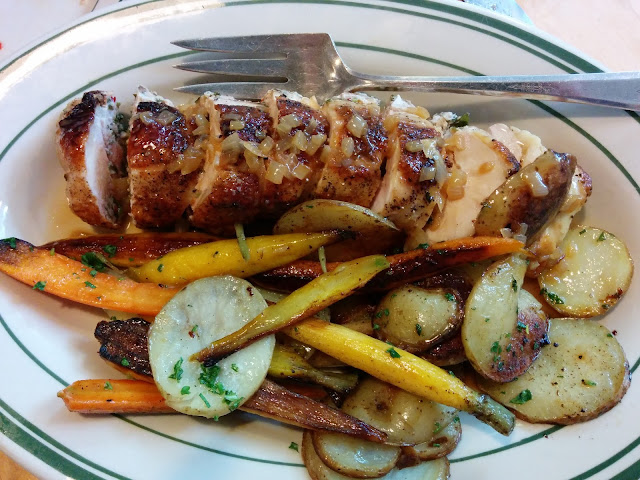 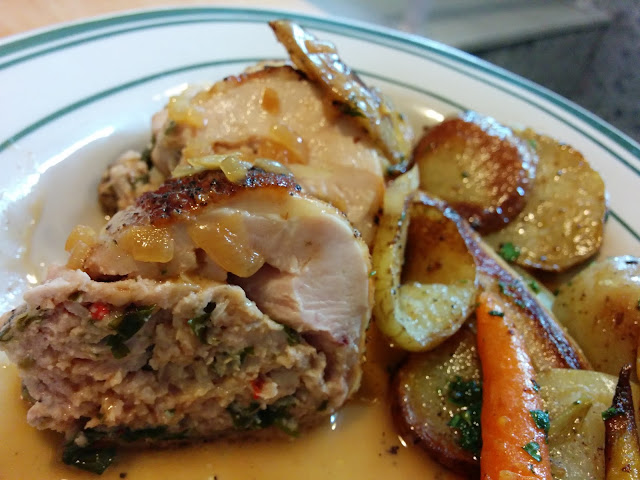 there is only one dessert but it is a worthy basque cake with almonds- not too heavy, not too light, a terrific end to a terrific lunch... 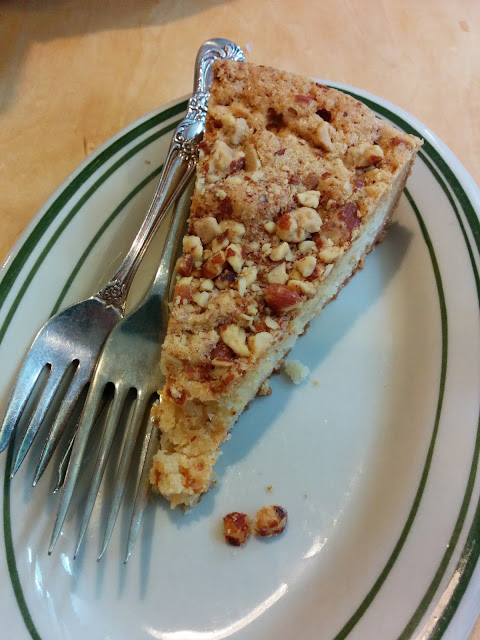 I will go back there in a flash- and the good news is that you can BYO wine for a corkage fee! So this one will definitely go on our list of options!

and I promise the next post will be back in Amsterdam! so please bookmark this space LOL