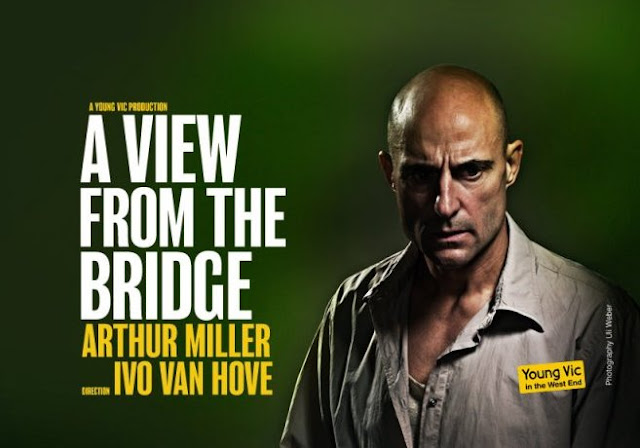 Following its smash-hit original broadcast, the Young Vic’s ‘magnetic, electrifying, astonishingly bold’ production of A View from the Bridge returns due to audience demand.

The great Arthur Miller confronts the American dream in this dark and passionate tale. In Brooklyn, longshoreman Eddie Carbone welcomes his Sicilian cousins to the land of freedom. But when one of them falls for his beautiful niece, they discover that freedom comes at a price. Eddie’s jealous mistrust exposes a deep, unspeakable secret – one that drives him to commit the ultimate betrayal.

and here something from the wikipedia entry on the play-

A View from the Bridge is a play by American playwright Arthur Miller, first staged on September 29, 1955, as a one-act verse drama with A Memory of Two Mondays at the Coronet Theatre on Broadway. The play was unsuccessful and Miller subsequently revised the play to contain two acts; this version is the one with which audiences are most familiar today. The two-act version premiered in the New Watergate theatre club in London's West End under the direction of Peter Brook on October 11, 1956.

The play is set in 1950s America, in an Italian American neighborhood near the Brooklyn Bridge in New York. It employs a chorus and narrator in the character of Alfieri. Eddie, the tragic protagonist, has an improper love of, and almost obsession with, Catherine, his wife Beatrice's orphaned niece, so he does not approve of her courtship with Beatrice's cousin Rodolfo. Miller's interest in writing about the world of the New York docks originated with an unproduced screenplay that he developed with Elia Kazan in the early 1950s (entitled The Hook) that addressed corruption on the Brooklyn docks. Kazan later directed On the Waterfront, which dealt with the same subject. Miller said that he heard the basic account that developed into the plot of A View from the Bridge from a lawyer who worked with longshoremen, who related it to him as a true story.

Act 1 – In the opening speech Alfieri describes the violent history of the small Brooklyn community of Red Hook and tells us that the second-generation Sicilians are now more civilized, more American, and are prepared to "settle for half" (half measures) and let the law handle their disputes. But there are exceptions, and he then begins to narrate the story of Eddie Carbone, an Italian American longshoreman who lives with his wife Beatrice and her orphaned niece Catherine.

Eddie is a good man who, although ostensibly protective and fatherly towards Catherine, harbours a growing passion for her as she approaches her 18th birthday. We learn that he has not had sex with his wife for nearly three months. Catherine is studying to become a stenographer and Eddie objects to her taking a job she has been offered until she finishes her coursework, expressing a dislike for the way she dresses and the interest she is beginning to show in men. Beatrice is more supportive of Catherine's ventures and persuades Eddie to let her take the job.

Eddie returns home one afternoon with the news that Beatrice's two cousins, brothers Marco and Rodolpho, have safely arrived in New York as illegal immigrants. He has agreed to house them saying that he is honoured to be able to help family. Marco is quiet and thoughtful, possessing a remarkable strength, whereas Rodolpho is more unconventional, with plans to make a career singing in America. Marco has a family starving in Italy and plans to return after working illegally for several years, whereas Rodolpho intends to stay. Although Eddie, Beatrice and Catherine are at first excellent hosts, cracks appear when Rodolpho and Catherine begin dating.

Eddie convinces himself that Rodolpho is homosexual and is only expressing interest in Catherine so he can marry her and gain status as a legal citizen. He confronts Catherine with his beliefs and she turns to Beatrice for advice. Beatrice, starting to realise Eddie's true feelings, tells her that she should marry Rodolpho and move out. In the meantime, Eddie turns to Alfieri, hoping for help from the law. However, Alfieri tells him that the only recourse he has is to report Rodolpho and Marco as illegal immigrants. Seeing no solution to his problem, Eddie becomes increasingly desperate and takes his anger out on Rodolpho and, in teaching him to box, 'accidentally' injures him. Marco reacts by quietly threatening Eddie, showing his strength by holding a heavy chair above Eddie's head with one hand.

Act 2 – A few months have passed and Eddie reaches a breaking point when he discovers that Catherine and Rodolpho have slept together and are intent on marrying. Drunk, he kisses Catherine and then attempts to prove that Rodolpho is gay by suddenly and passionately kissing him also. After a violent confrontation, Eddie orders Rodolpho to leave the apartment.

Eddie visits Alfieri and insists that the kiss has proved Rodolpho is gay and that he is only marrying Catherine for citizenship, but once again Alfieri says the law cannot help. Out of desperation, Eddie phones immigration services but in the meantime Beatrice has arranged for Marco and Rodolpho to move in with two other illegals in the flat above. When immigration officials arrive and arrest Marco, Rodolpho and the two other immigrants Eddie pretends that the arrest comes as a complete surprise to him, but Beatrice and Marco see through this. Marco spits in Eddie's face in front of everyone and accuses Eddie of killing his starving children. Eddie tries to convince the neighborhood of his innocence but they turn away from him.

Alfieri visits Marco and Rodolpho in custody, obtaining their release on bail until their hearing comes up. Alfieri explains that Rodolpho will be able to stay once he has married Catherine but warns Marco that he will have to return to Italy. Vengeful, Marco confronts Eddie publicly on his release, and Eddie turns on him with a knife, demanding that he take back his accusations and restore his honour. In the ensuing scuffle, Eddie is stabbed with his own knife and dies, as his stunned family and neighbours stand around.

The cast tonight - all absolutely amazing- you literally couldn't take your eyes off the stage- the drama was so intense and the coming events so inevitable given the characters that you were drawn into and along with the tale....

So my own review of this extremely intense family drama: every single performance was outstanding. Eddie, Beatrice, Catherine and the illegal immigrants they shelter, Marco and Rodolpho, all came to vivid life on stage.  Each of them knowing things are not right and each of them allowing the train wreck they see coming happen.  Each time Beatrice attempts to call out Eddie and Catherine on the truth, without an absolute allegation that will destroy her marriage to the man she loves, she fails.  Each time Catherine surrenders to Eddie's emotional manipulation instead of standing up for herself, the atmosphere darkens further.

The most touching character in the play (to me) was Marco, who was trying to keep his family alive and who was the ultimate victim (IMHO) of the refusal of Eddie and Catherine to confront the issues raised by Eddie's passion for his niece.  In the end it was he who drew my tears.  Betrayed by Eddie, Marco's deportation will certainly end with the death of one or more of his children and his wife who are starving in Sicily. A truly honorable man, it was he who deserved the admiration of the narrator/lawyer/Alfieri rather than Eddie in my opinion.  The narrator's evolving identification with Eddie created - in my opinion an inability to keep his higher view.

Overall a very interesting character study - intense drama - with a pacing that just built the tension of the situation to the final climactic scene where it literally rained blood.... 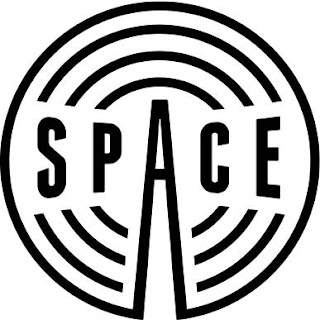 Lau is a British folk band from both Scotland and England, formed in 2005. Named after an Orcadian word meaning "natural light", the band is composed of Kris Drever (guitar, vocals), Martin Green (accordion, piano, electronics) and Aidan O'Rourke (fiddle). To date, the band has released four studio albums and a live album. 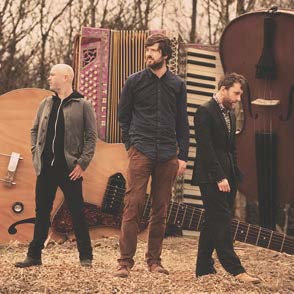 Email ThisBlogThis!Share to TwitterShare to FacebookShare to Pinterest
Labels: #nationaltheaterlive, a view from the bridge, arthur miller, National Theater Live