look for this one!

so last night we had a really great evening- we saw a free screening of the documentary called "California Typewriter" which was completely adsorbing and utterly engaging and totally terrific! And to make the evening even more fun, we ran into our friends Gene & Mary Ann at the screening and so we grabbed a bite afterward at Louie's Modern downtown.

so first - let's give a shout out to the upcoming (and 20th!) Sarasota Film Festival (SFFXX) 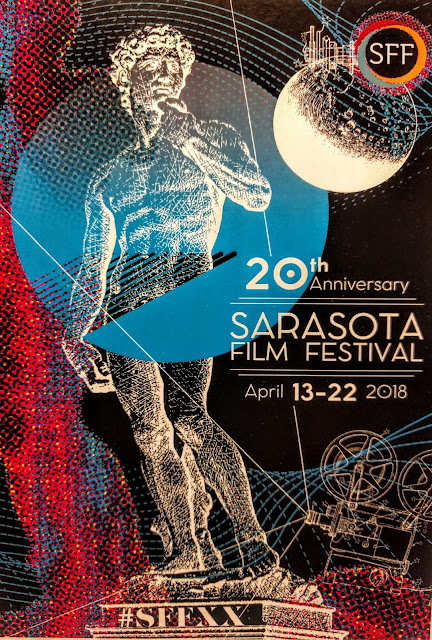 and then on to the film itself- which was note perfect, in my opinion- it had it all- laughs and drama and nostalgia and reminiscences and "deep thoughts" about life .... how could you go wrong?

"Starring" well known proponents, users, and collectors of the typewriter, the movie explored the history of the typewriter and the near death of the typewriter before giving us a glimmer of hope that all has not been lost.  As the long playing analog recordings have hung on, so too it seems, life may be extended for typewriters. 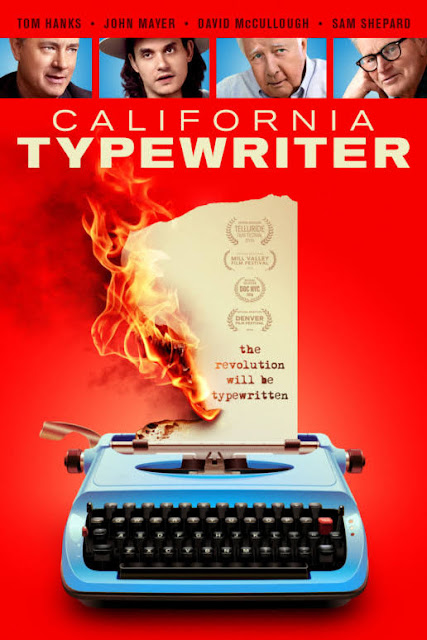 The film centers on two men, Ken and Herb,  who work in a typewriter repair store in Berkeley California called California Typewriter- they are shown below - first the repairman Ken and and then the owner Herb.  They have worked together for decades. 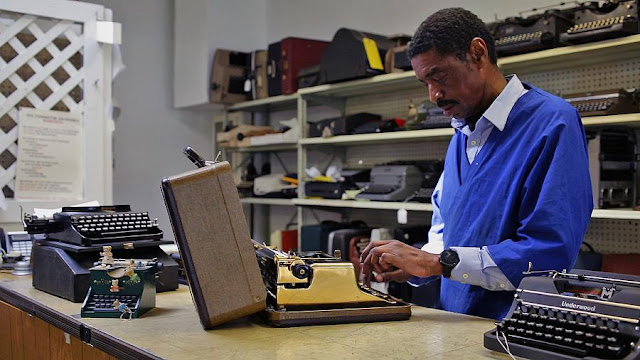 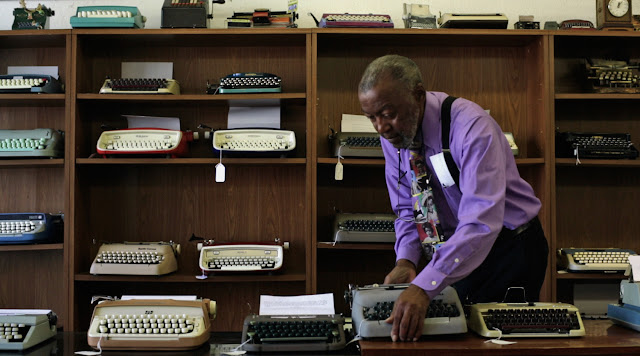 The film starts with a vignette of the Royal Road Test - a 1966 piece of performance art by Ed Ruscha, Mason Williams and Patrick Blackwell.  A current day Mason Williams sets up the scene: Ed Ruscha and Mason Williams threw a royal typewriter from a convertible going sixty miles out into the desert. Then they documented the whole event in photographs. Typewriter keys hanging from tumbleweeds, the carriage return and other parts mangled in the dirt. It was a precursor of the art to come. 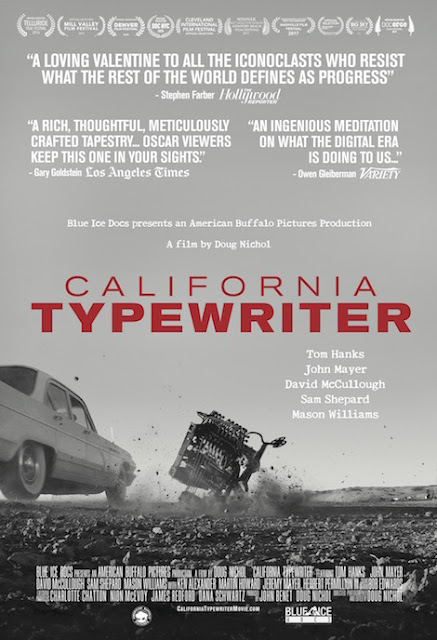 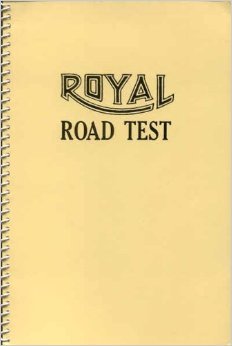 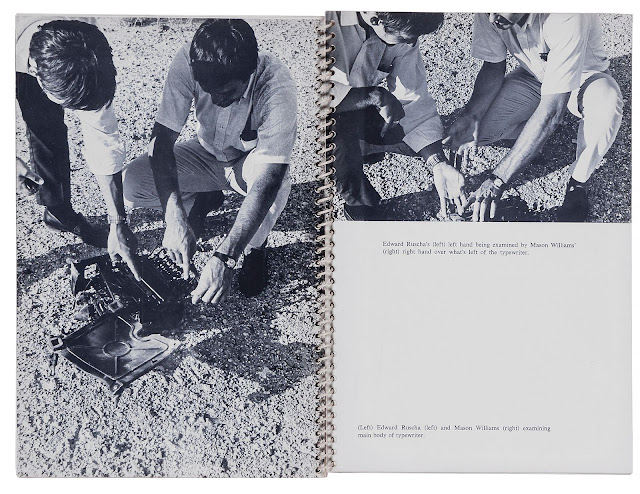 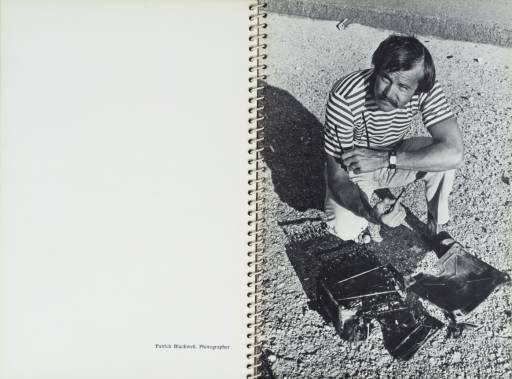 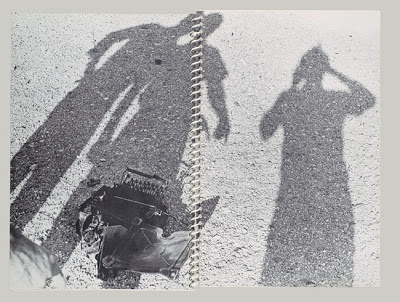 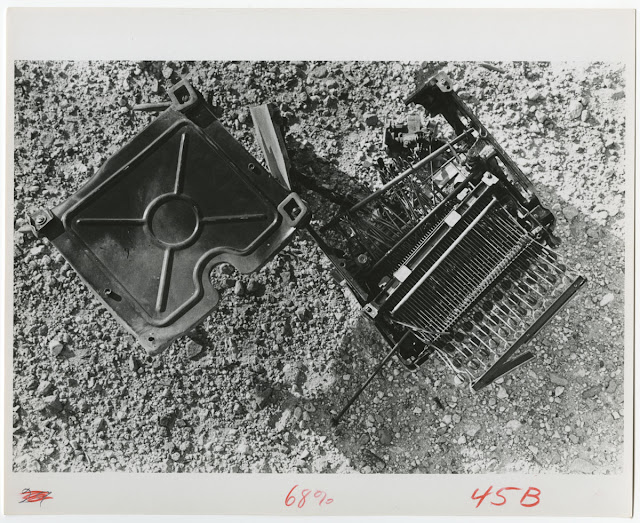 then we meet Tom Hanks, Sam Shepard, David McCullough and John Mayer all of whom are fans of typewriters to varying degrees - Hanks is an avid collector, the others use them to varying degrees, as a mechanism for creation - enabler for slowing down the thought process so as to take the time needed and as a way of recording variations for posterity.... absolutely fascinating interviews - and along the way we also learn the history of the typewriter and the revolution it brought in the post civil war era as well as its role in creating work for women that paid a living wage. 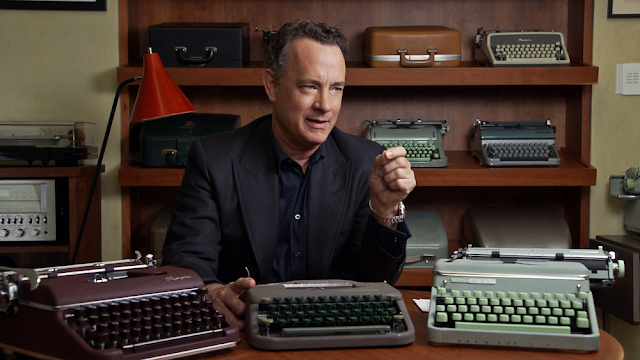 throughout the various snippets of history and collector interviews we go back to the typewriter shop and get to know the family and employees of California Typewriter. Along the way, we meet the artist - Jeremy Mayer who creates art strictly from typewriter parts.  Hooked on images from Fritz Lang's Metropolis when he was a kid he started creating things that resembled the robot from the film. 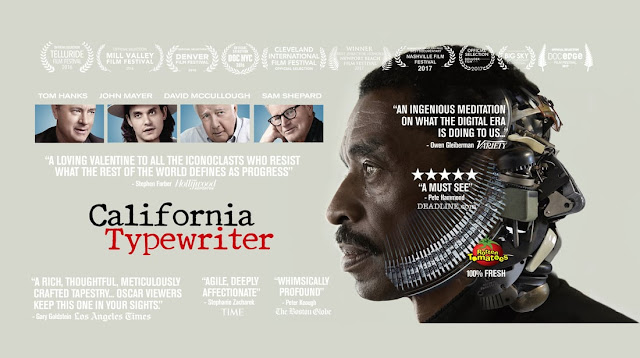 you can see the work he does in the promo poster for the film (above) - one side of the head above being the repairman at California Typewriter and the other being his image created by Jeremy Mayer... 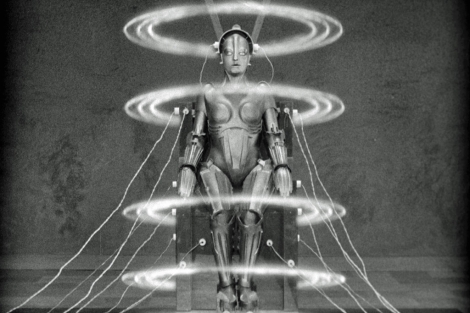 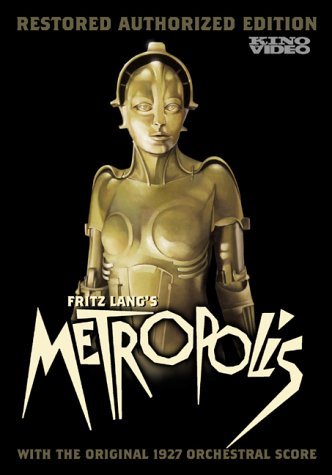 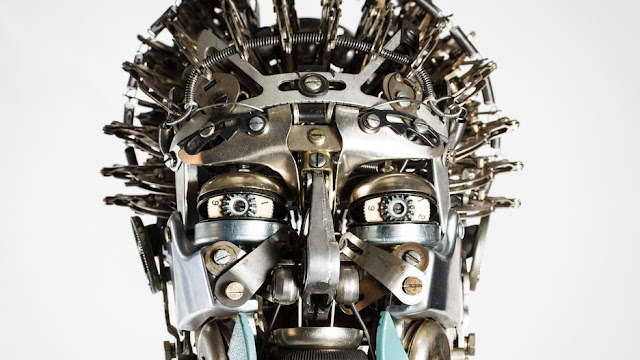 as the shop heads to failure, Jeremy helps them set up a website to advertise their wares, their services and the culture surrounding the "typewriter revolution" - set up via the typewriter manifesto... they have popular TYPE-INs and start to eek out a real living.  Things are still precarious as the film ends, but one does get an appreciation of the typewriter via the various collectors (especially one Canadian guy named Martin Howard.) 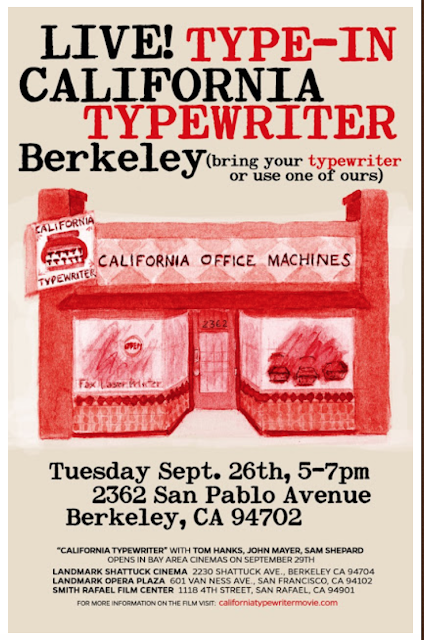 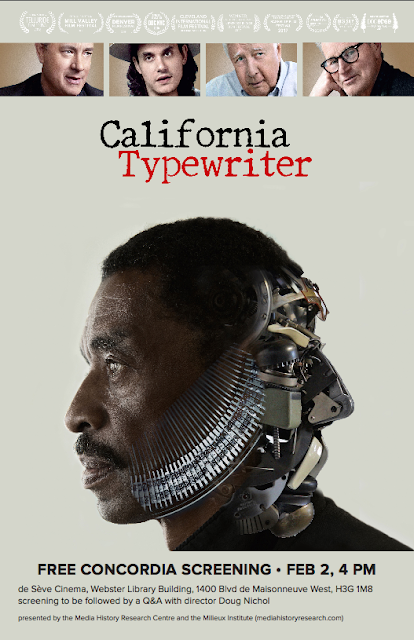 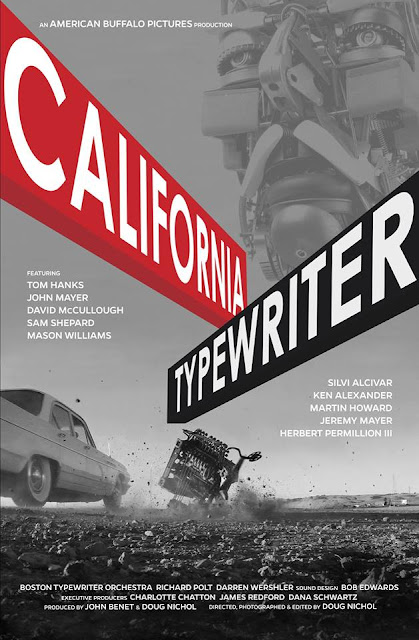 So I hope I have whetted your appetite to see this film because I thought it was a perfect example of documentary and worth seeking out!

You can visit the shop's online presence here - http://www.californiatypewriter.com/

You can see the film trailer and buy it here- http://californiatypewritermovie.com/

from the film's website-
CALIFORNIA TYPEWRITER is a documentary portrait of artists, writers, and collectors who remain steadfastly loyal to the typewriter as a tool and muse, featuring Tom Hanks, John Mayer, David McCullough, Sam Shepard, and others.

It also movingly documents the struggles of California Typewriter, one of the last standing repair shops in America dedicated to keeping the aging machines clicking.

In the process, the film delivers a thought-provoking meditation on the changing dynamic between humans and machines, and encourages us to consider our own relationship with technology, old and new, as the digital age’s emphasis on speed and convenience redefines who’s serving whom, human or machine?

Oh and I forgot to mention the Boston Typewriter Orchestra and the lady who writes poetry on a typewriter in response to a question from the people who see her performance art. It was all good and all incredibly interesting- GO SEE IT!!!!! 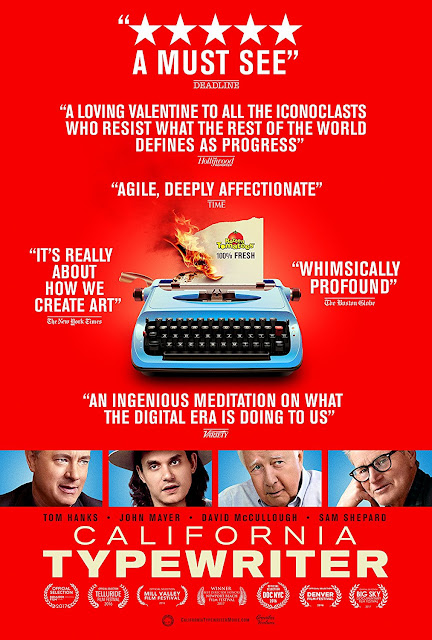 PS - I have to add this because it really tickled me to see the list of reviews of the film- located on this link. There were too many to type out and it won't cut and paste--- sorry you will just have to go there to see "Soul of an Old Machine" and "Songs in the Key of QWERTY" etc..... they loved it.... http://californiatypewritermovie.com/press/ 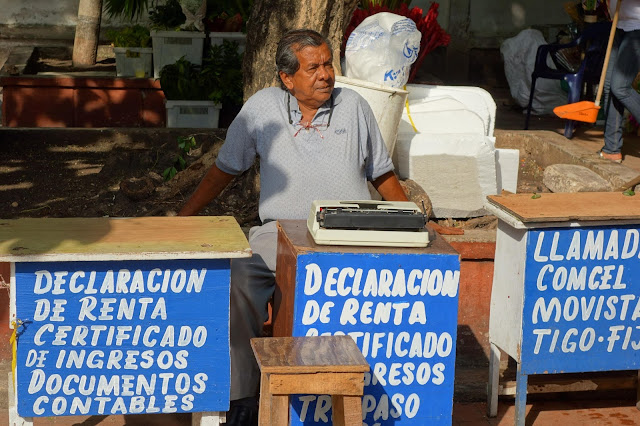 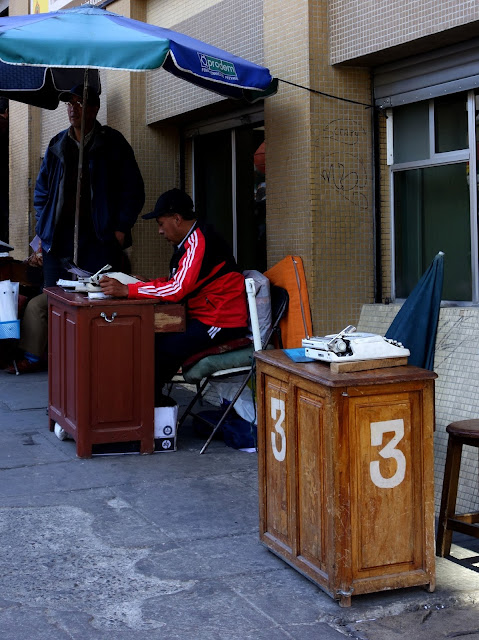 official documents must be typed and so there are people outside government buildings to help with the forms.... more tiny bits of typewriter info for your entertainment....
Posted by TOR at 9:19 PM