no country is blameless

I once heard a Canadian describe his countrymen as "unarmed Americans with health care" - and we do think of them as really really really nice people- but all countries have their shameful pasts even Canada... and this morning of our trip we visit the memorial to the victims of this shameful history.

After a few false turns we finally find Grand Pre. This is a location steeped in very sad history.

Grand-Pré National Historic Site is a park set aside to commemorate the centre of Acadian settlement from 1682 to 1755, and the British deportation of the Acadians that happened during the French and Indian War. The original village of Grand Pré extended four kilometres along the ridge between present-day Wolfville and Hortonville. Grand-Pré is listed as a World Heritage Site.  Grand-Pré (French for great meadow) is located on the shore of the Minas Basin, an area of tidal marshland, first settled about 1680 by Pierre Melanson who came from nearby Port-Royal which was the first capital of the French settlement of Acadia (Acadie in French).  Melanson and the Acadians who joined him in Grand-Pré built dykes there to hold back the tides along the Minas Basin. They created rich pastures for their animals and fertile fields for their crops. Grand-Pré became the bread basket of Acadia, soon outgrew Port-Royal, and by the mid-18th century was the largest of the numerous Acadian communities around the Bay of Fundy and the coastline of Nova Scotia.

During the French and Indian War, the British sought to neutralize any military threat Acadians posed and to interrupt the vital supply lines Acadians provided to Louisbourg and the Mi'kmaq by deporting Acadians from Acadia.  After the Battle of Fort Beauséjour, the British began the removal of the Acadians. Lieutenant Colonel John Winslow arrived in Grand-Pré with troops on August 19, 1755 and took up headquarters in the church. The men and boys of the area were ordered into the church on September 5. (if you are of Jewish background this story is starting to sound eerily familiar) Winslow informed them that all but their personal goods were to be forfeited and that they and their families were to be deported as soon as ships arrived to take them away. Before the first year was over, more than 6,000 Acadians were deported from the Bay of Fundy region. Many villages were burned to the ground to ensure the Acadians would not be able to return. Thousands more would be deported in the second wave of the Expulsion of the Acadians, which involved the deportation of the Acadians from Cape Breton and Prince Edward Island (1758). The deportation continued until England and France made peace in 1763. In all, 12,000 Acadians were deported. Many Acadians died from drowning, starvation, imprisonment, and exposure. 3,000 Acadian men, women and children found refuge in Louisiana after British forces exiled them from Acadie.  When the poem, Evangeline, by Henry Wadsworth Longfellow was published in the United States in 1847, the story of the Deportation and le Grand Dérangement, the great uprooting, was told to the English-speaking world. (Blue text source - wikipedia)

As I have mentioned several times, it was the story of the Acadians that drew us to this area, after we had taken the class on Cajun culture in Louisiana- where many Acadians ended up, after being dispersed throughout the american colonies and some being sent back to France (a country they hardy knew after being gone for nearly 100 years!)  The Acadians wanted to remain neutral because they did not consider themselves French after all the decades of living in the new world, but both the French and the British demanded their allegiance.

The memorial park and garden is so quiet and peaceful - the open fields that surround it belie the once busy and successful settlement that was located here.... 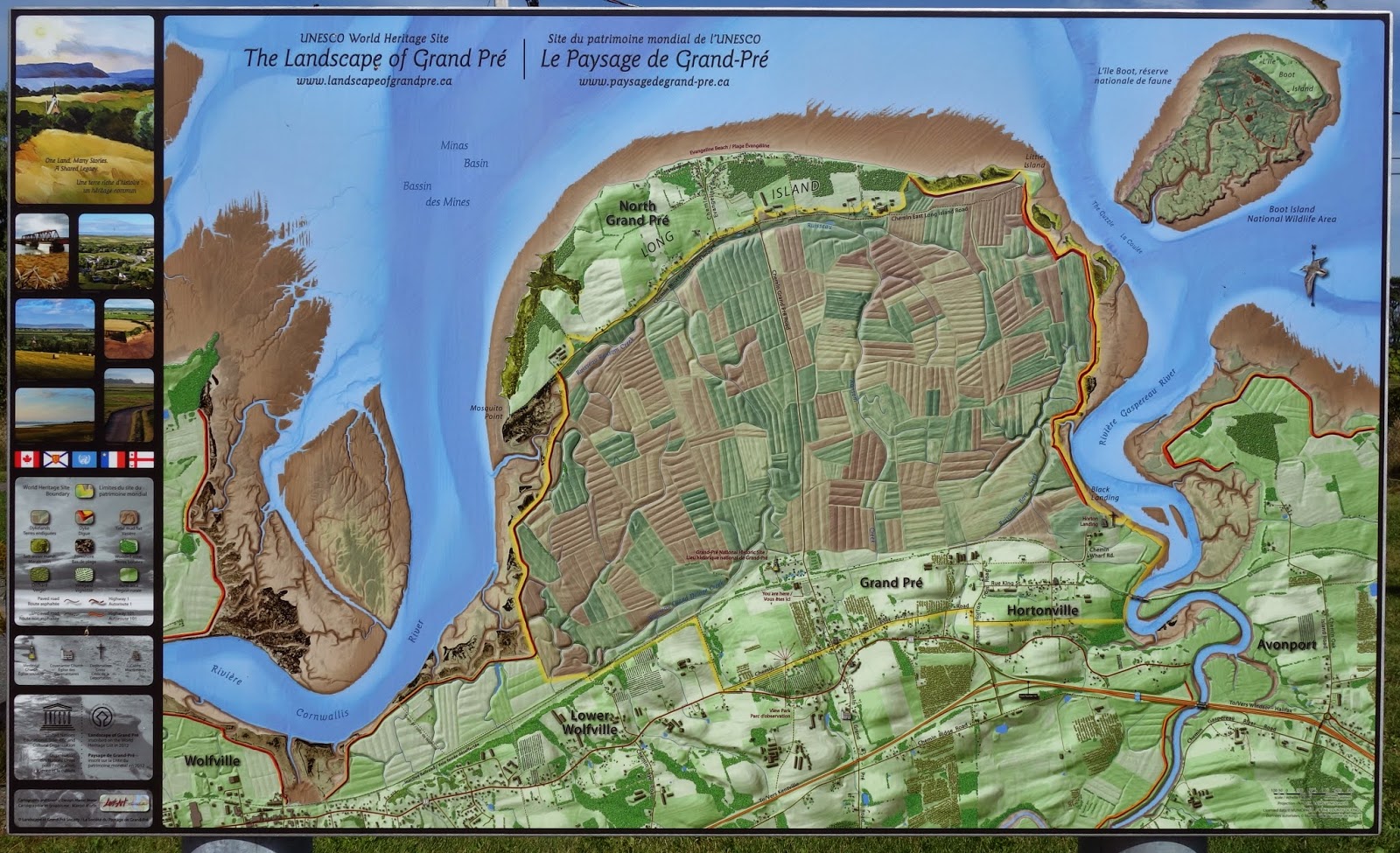 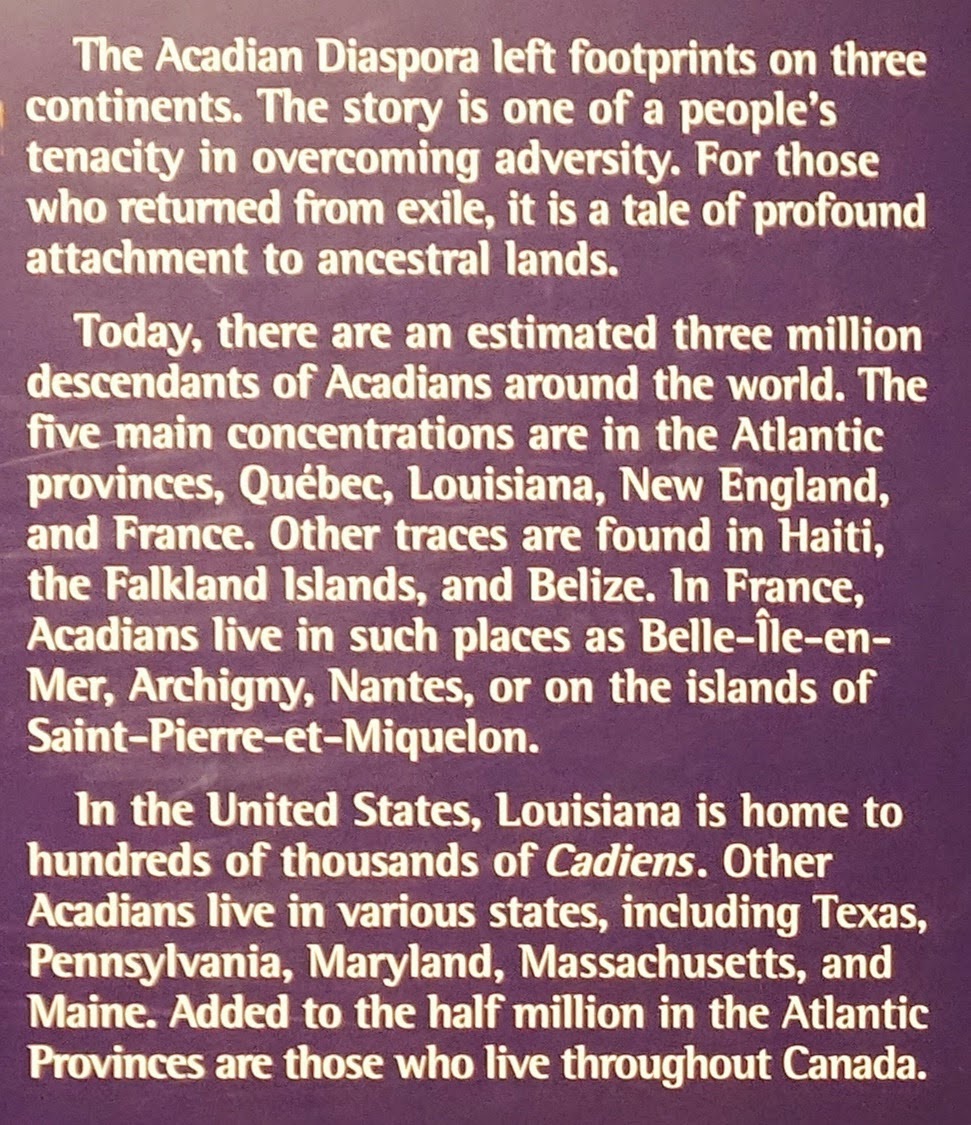 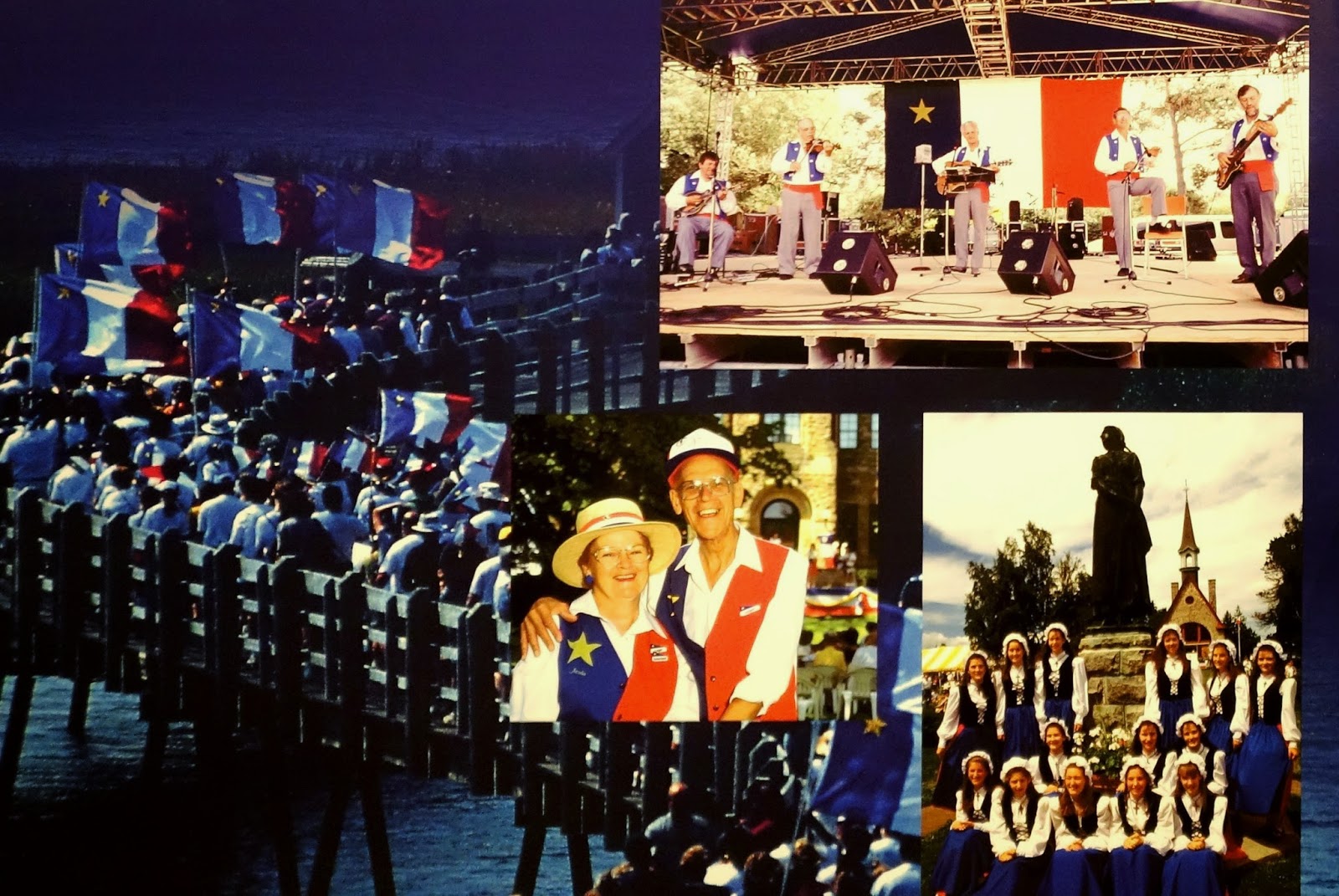 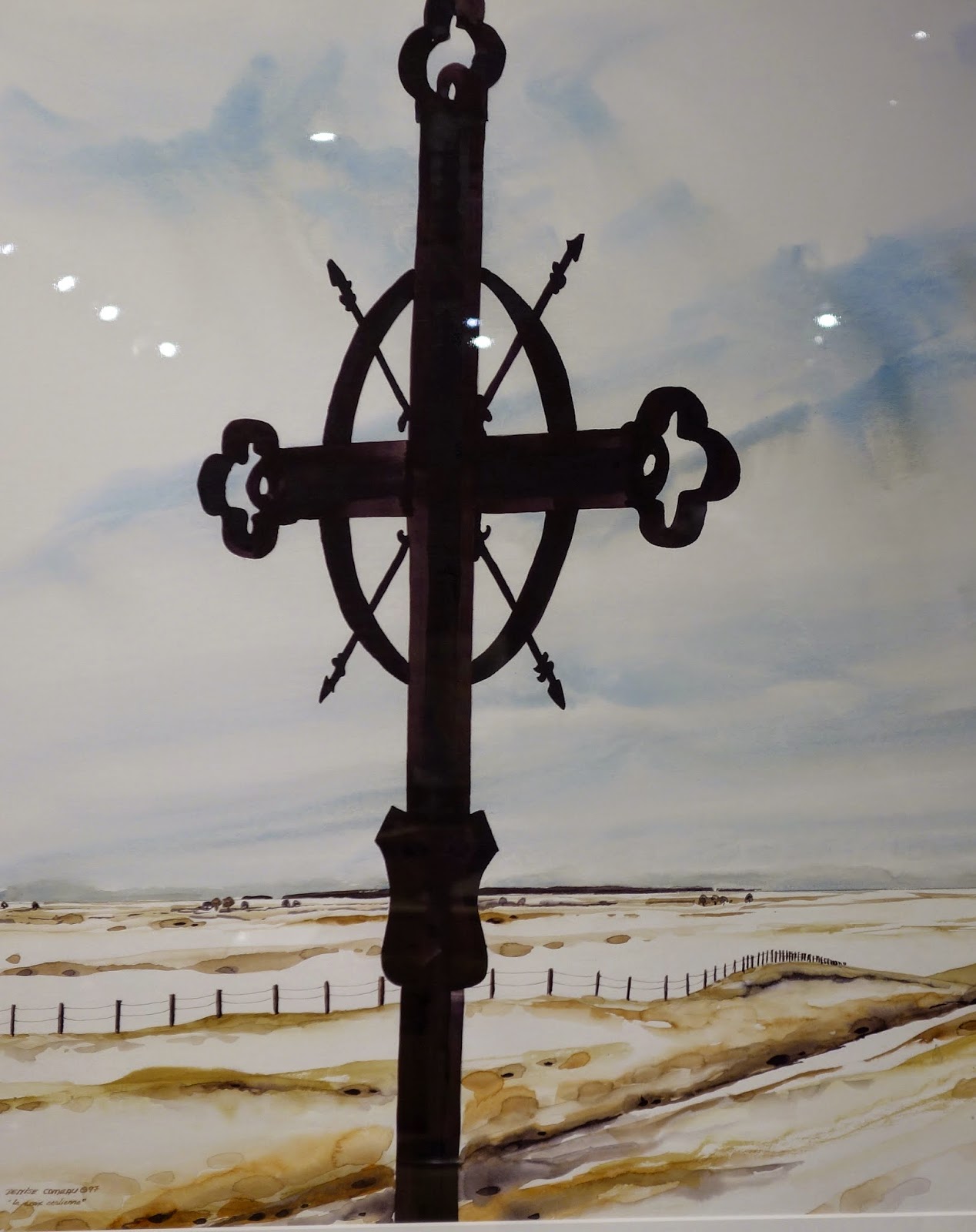 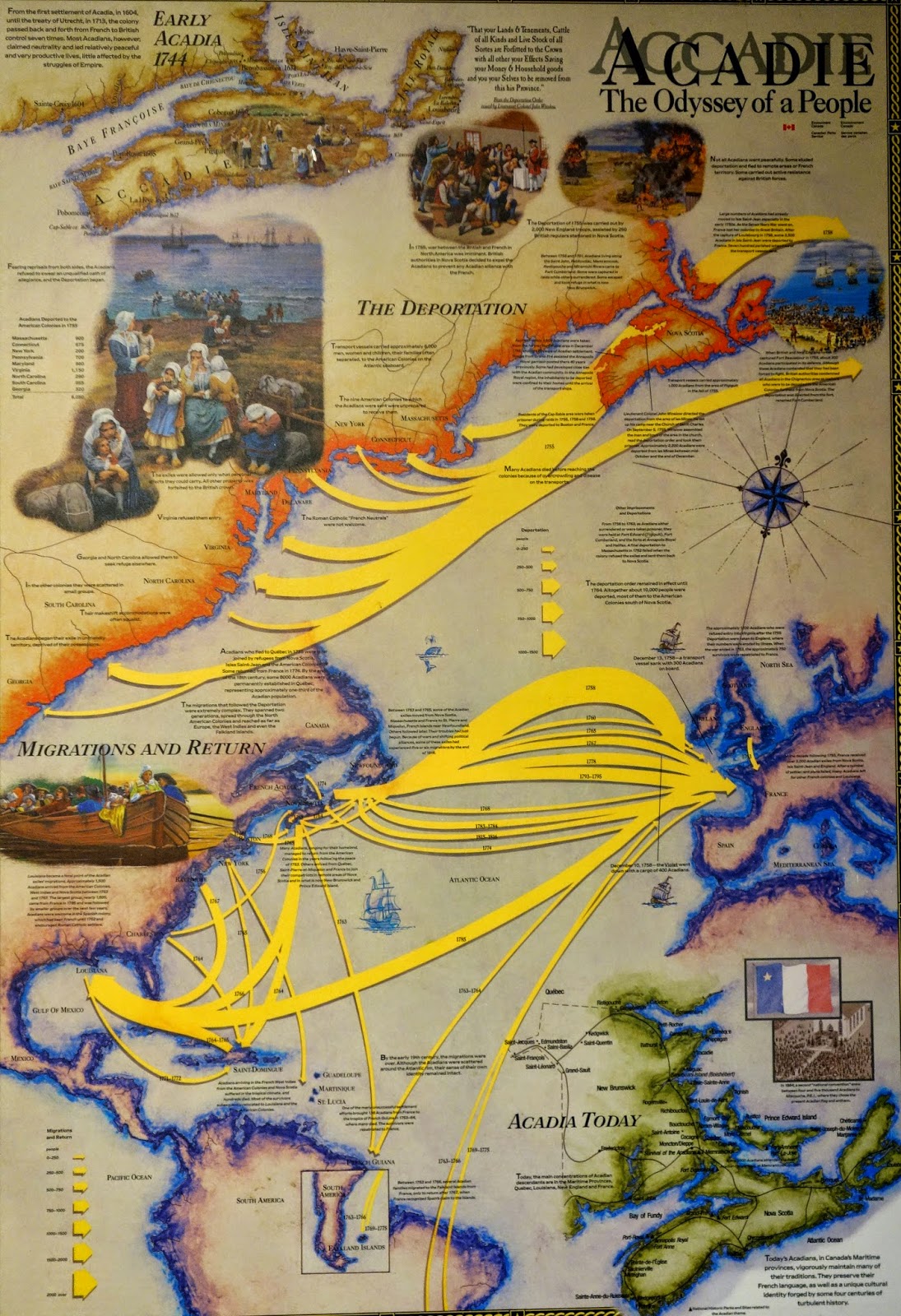 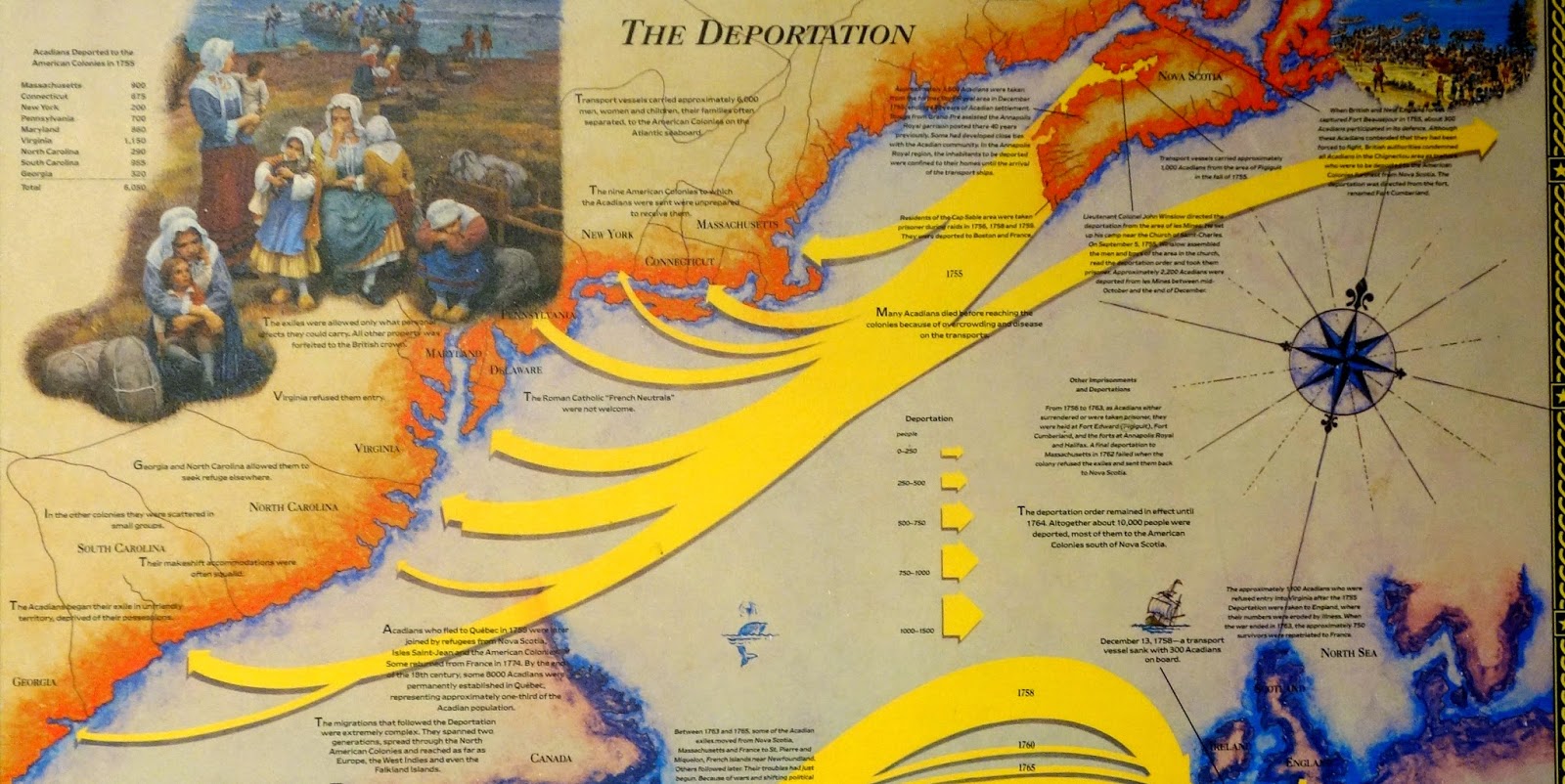 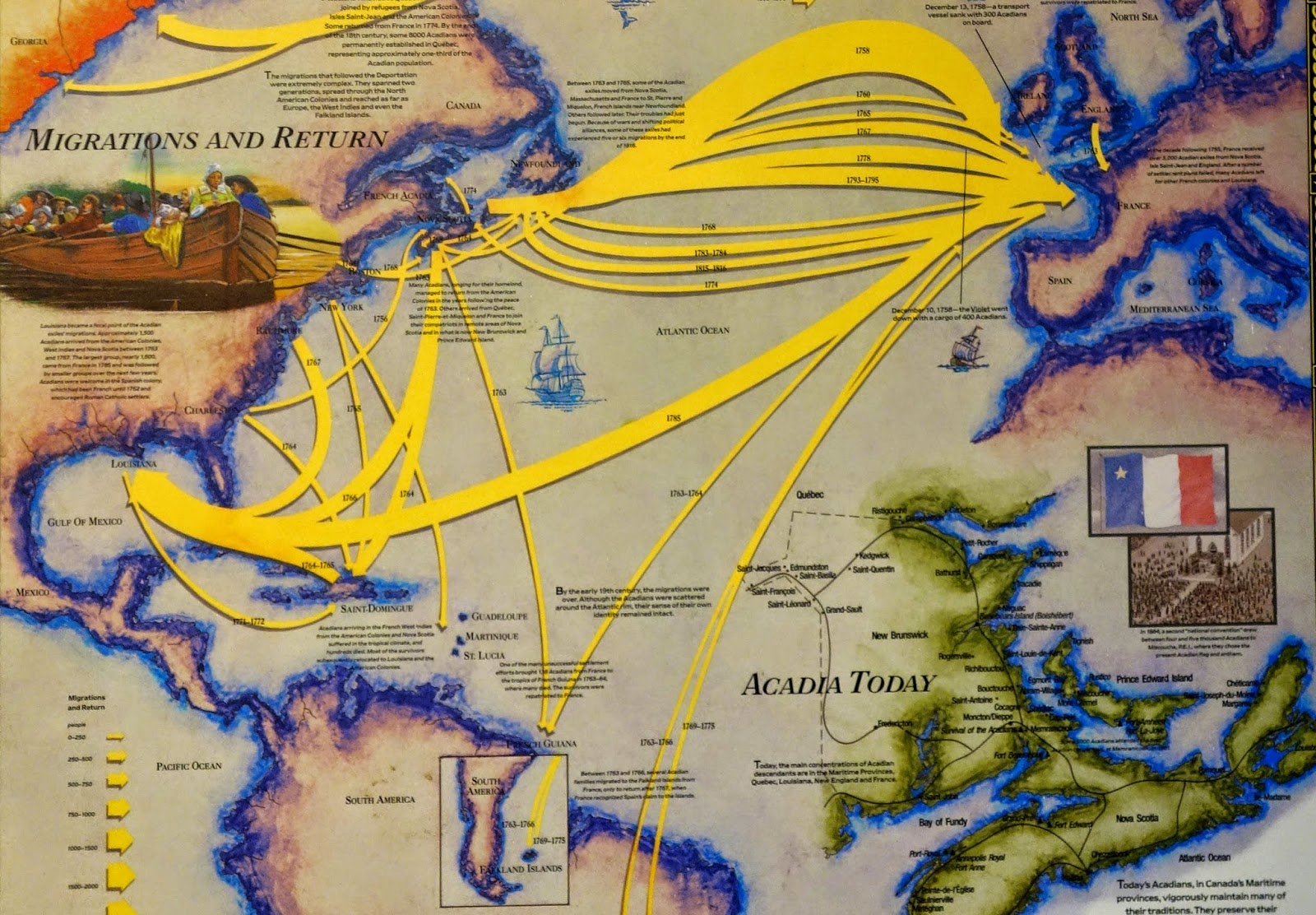 Where the Acadians live in Canada today- 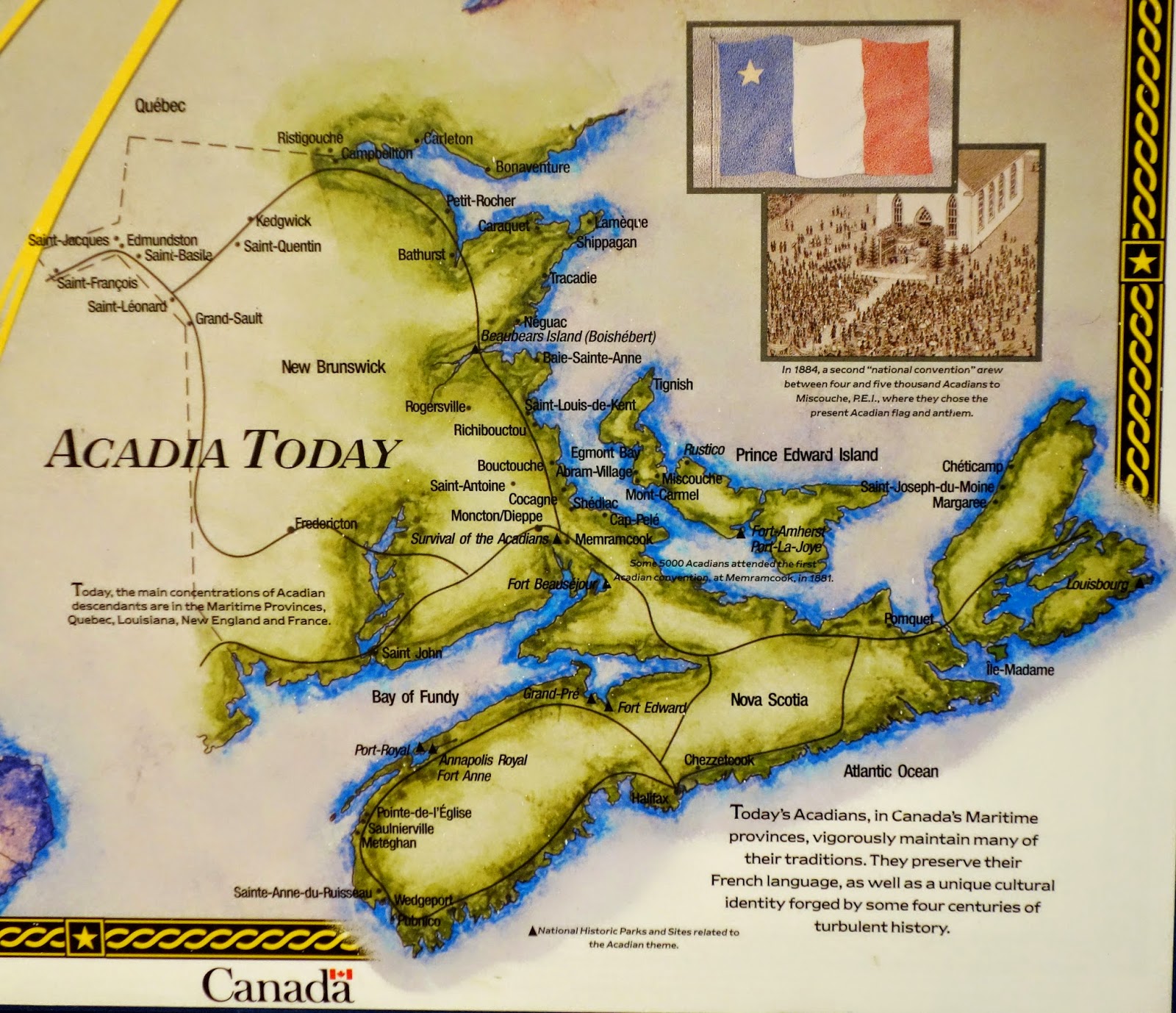 a small sculpture garden with very long armed children...(they must take after the Dad- LOL) 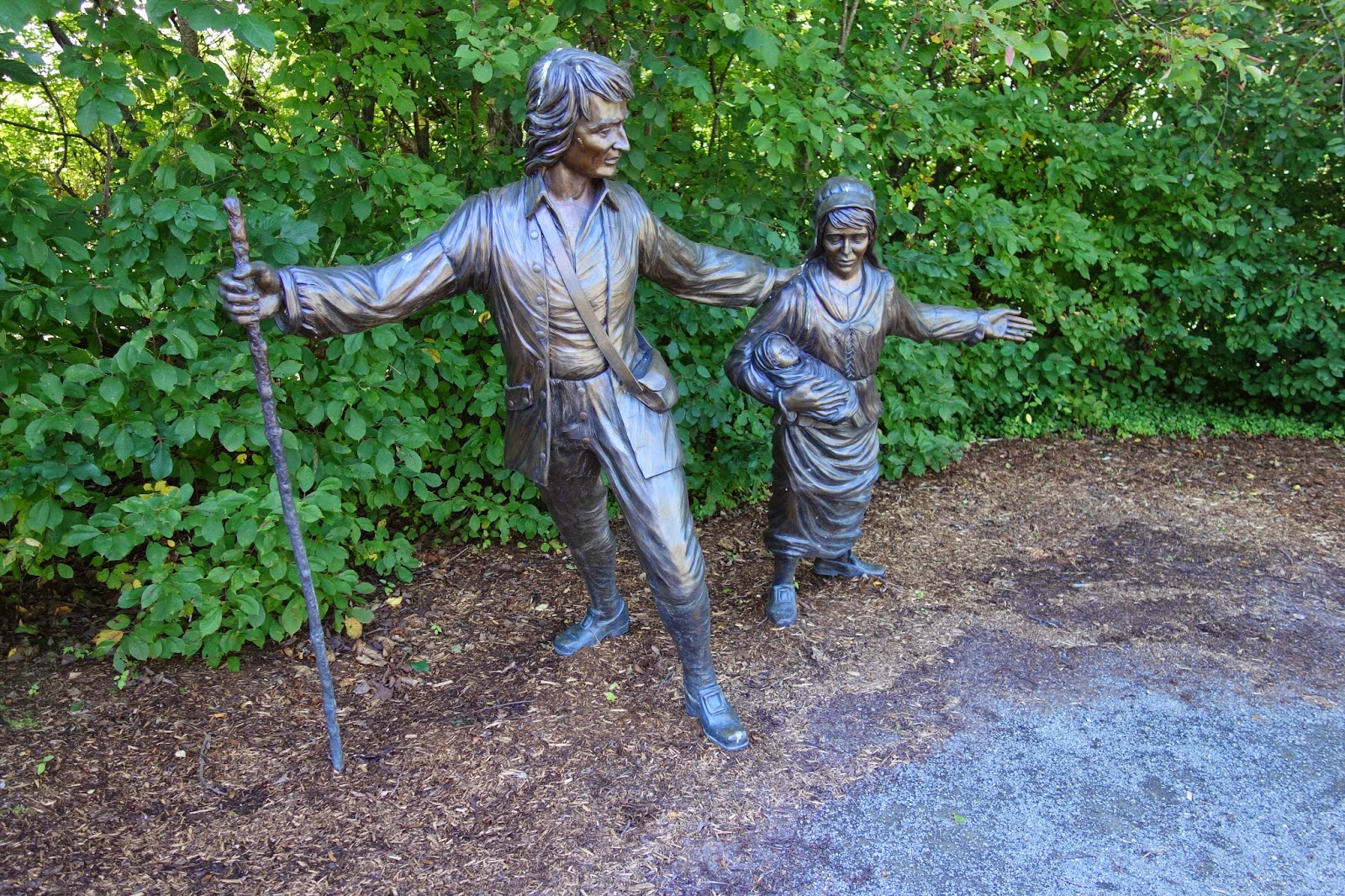 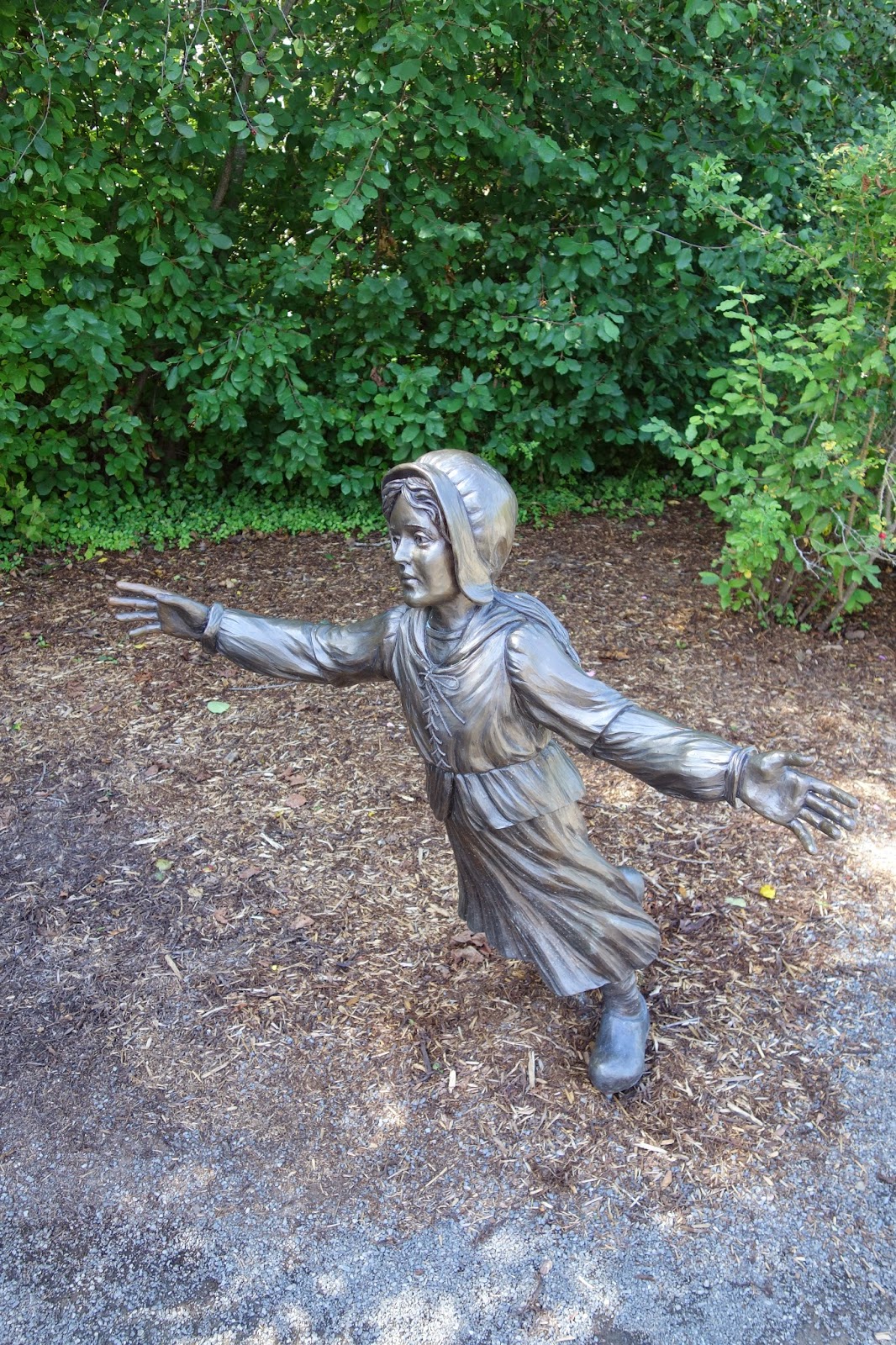 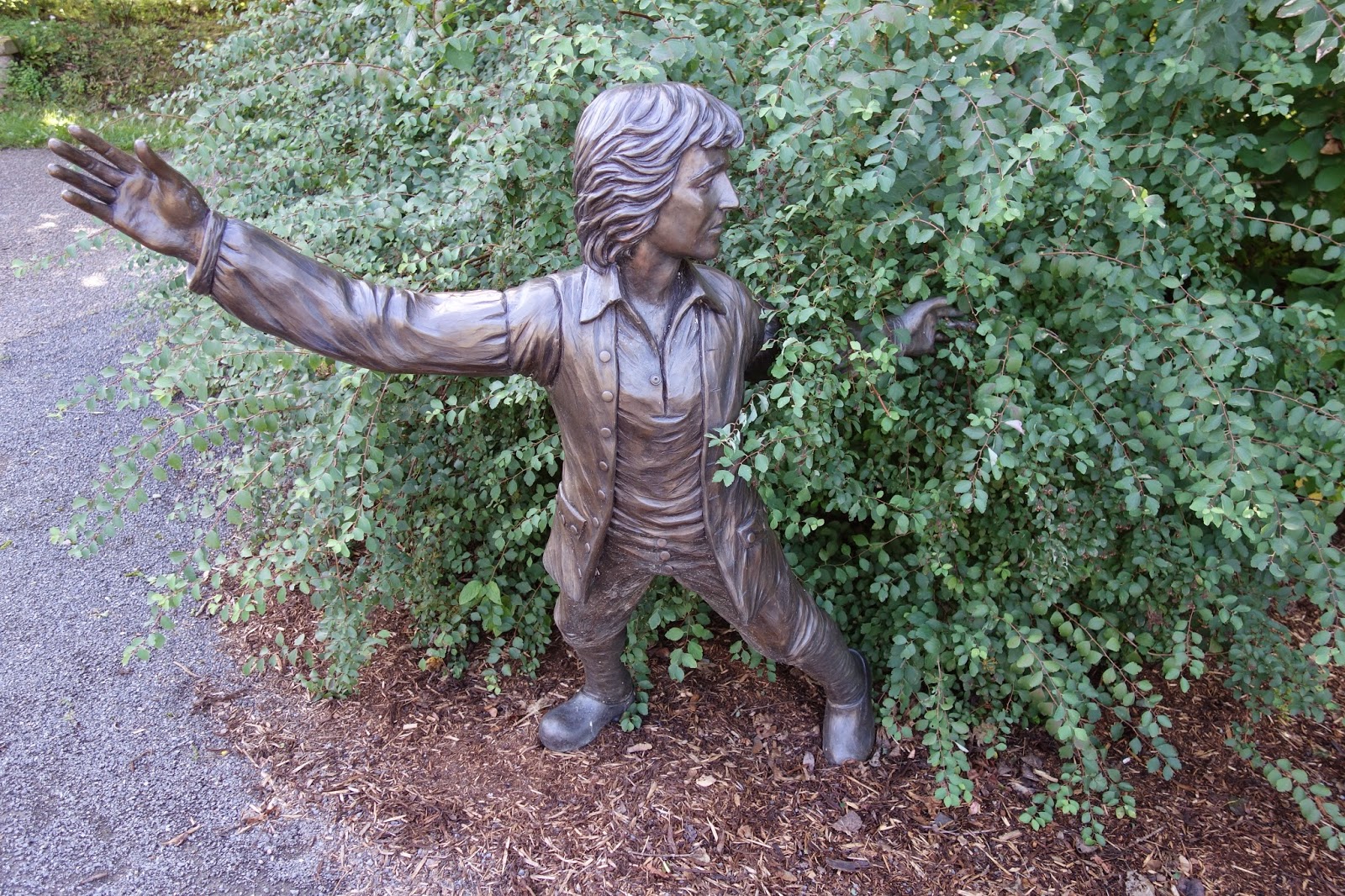 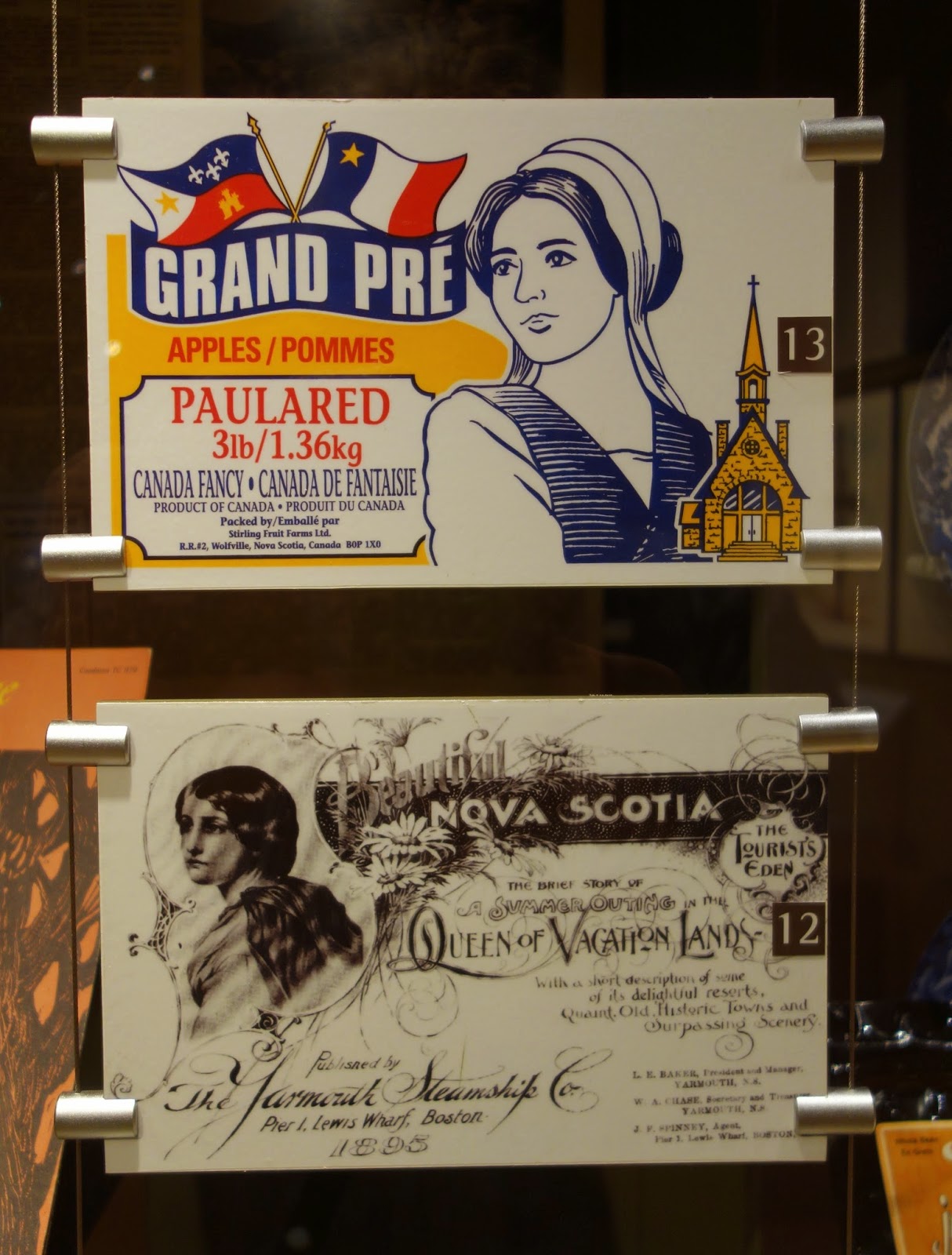 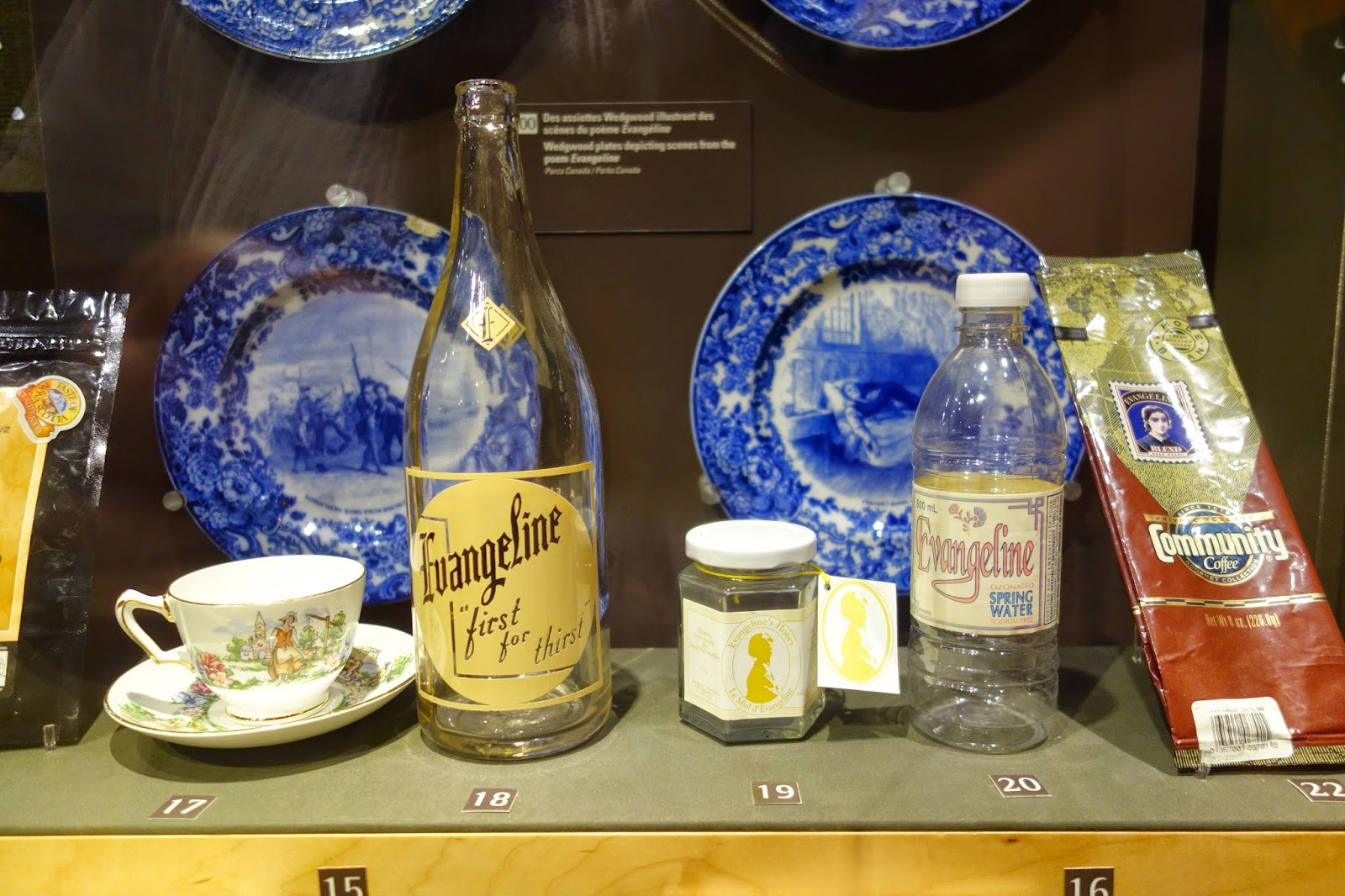 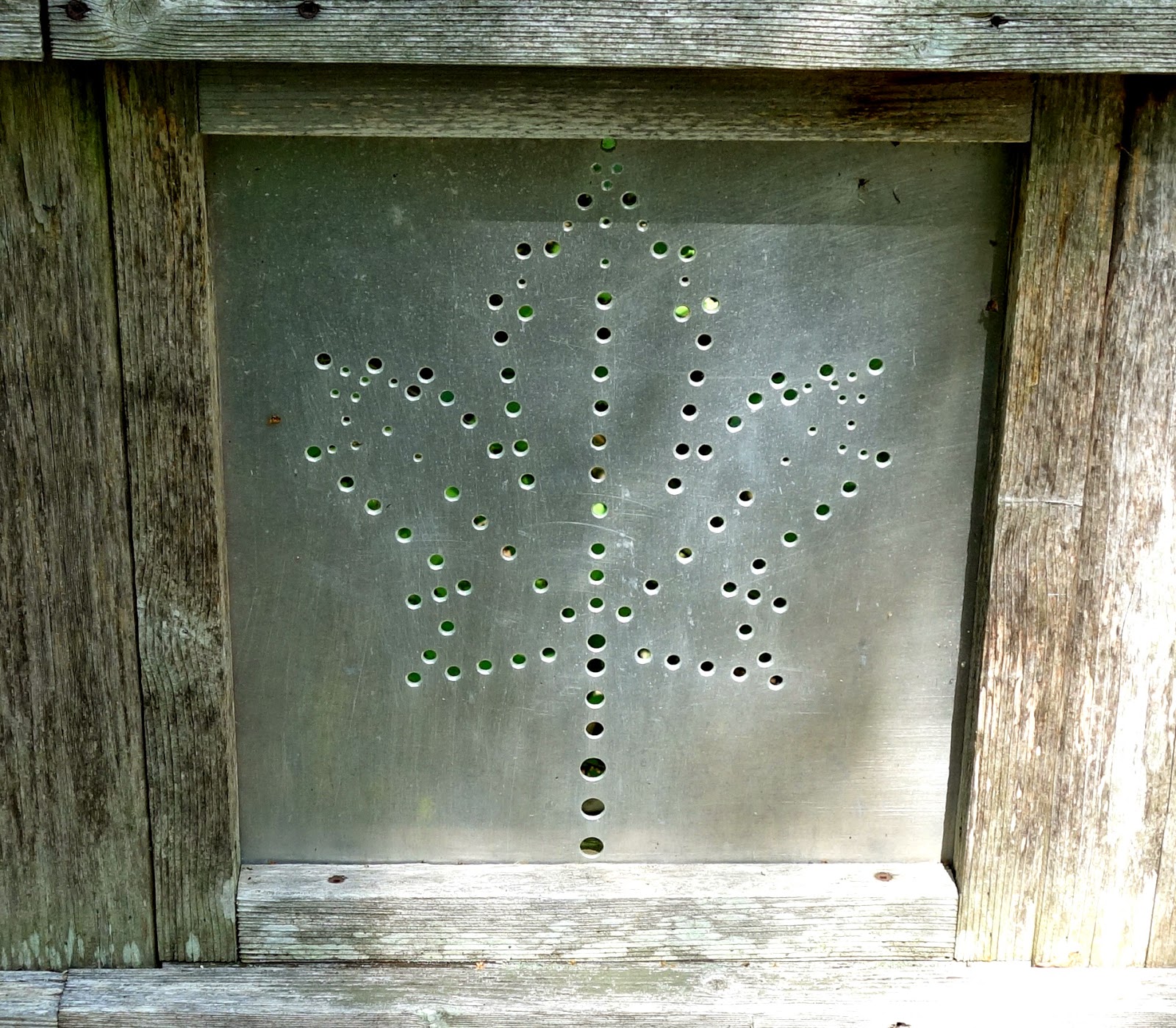 in the park area - you have to cross the tracks (with great caution LOL- you can see they are well used! LOL) 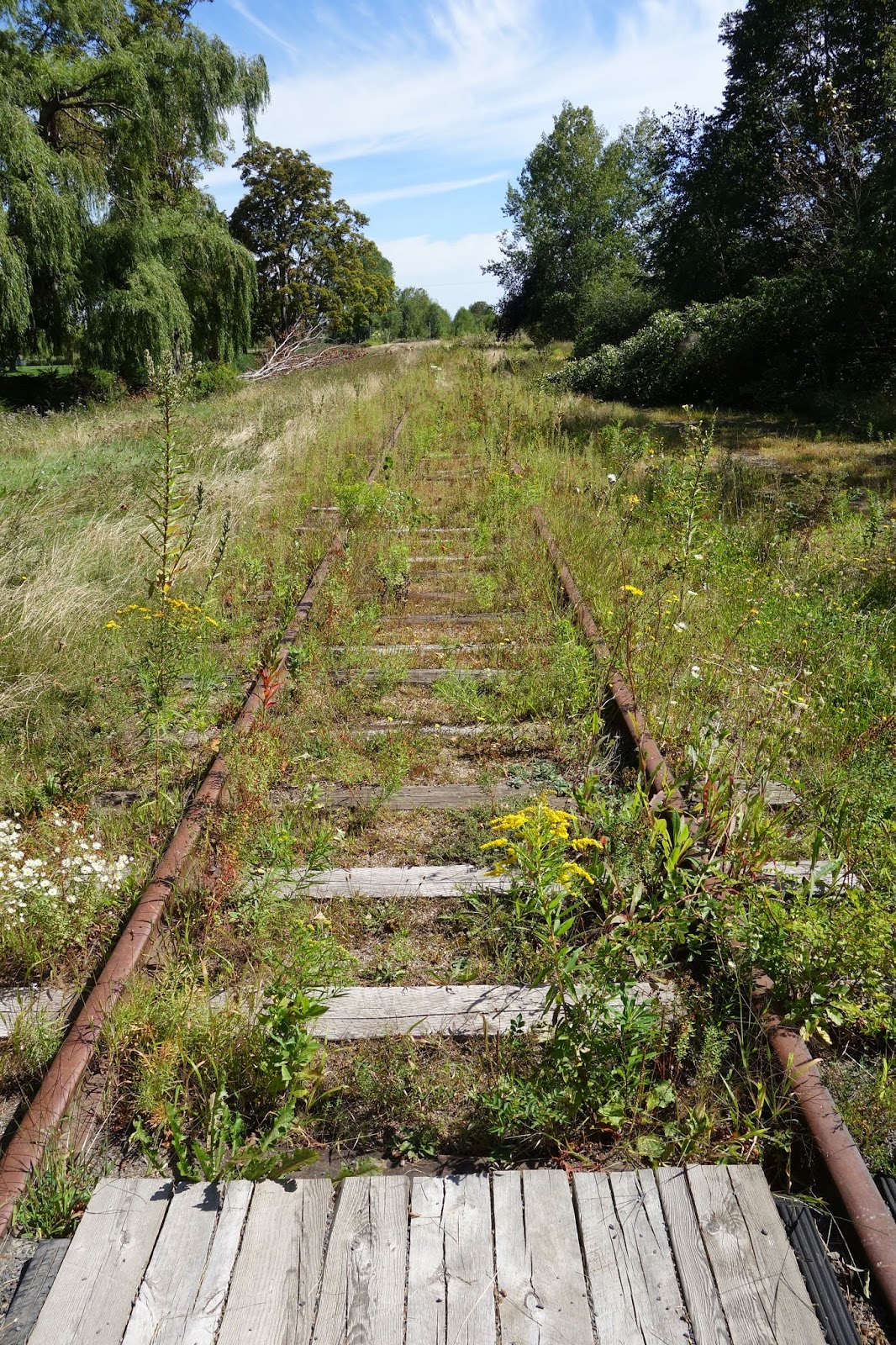 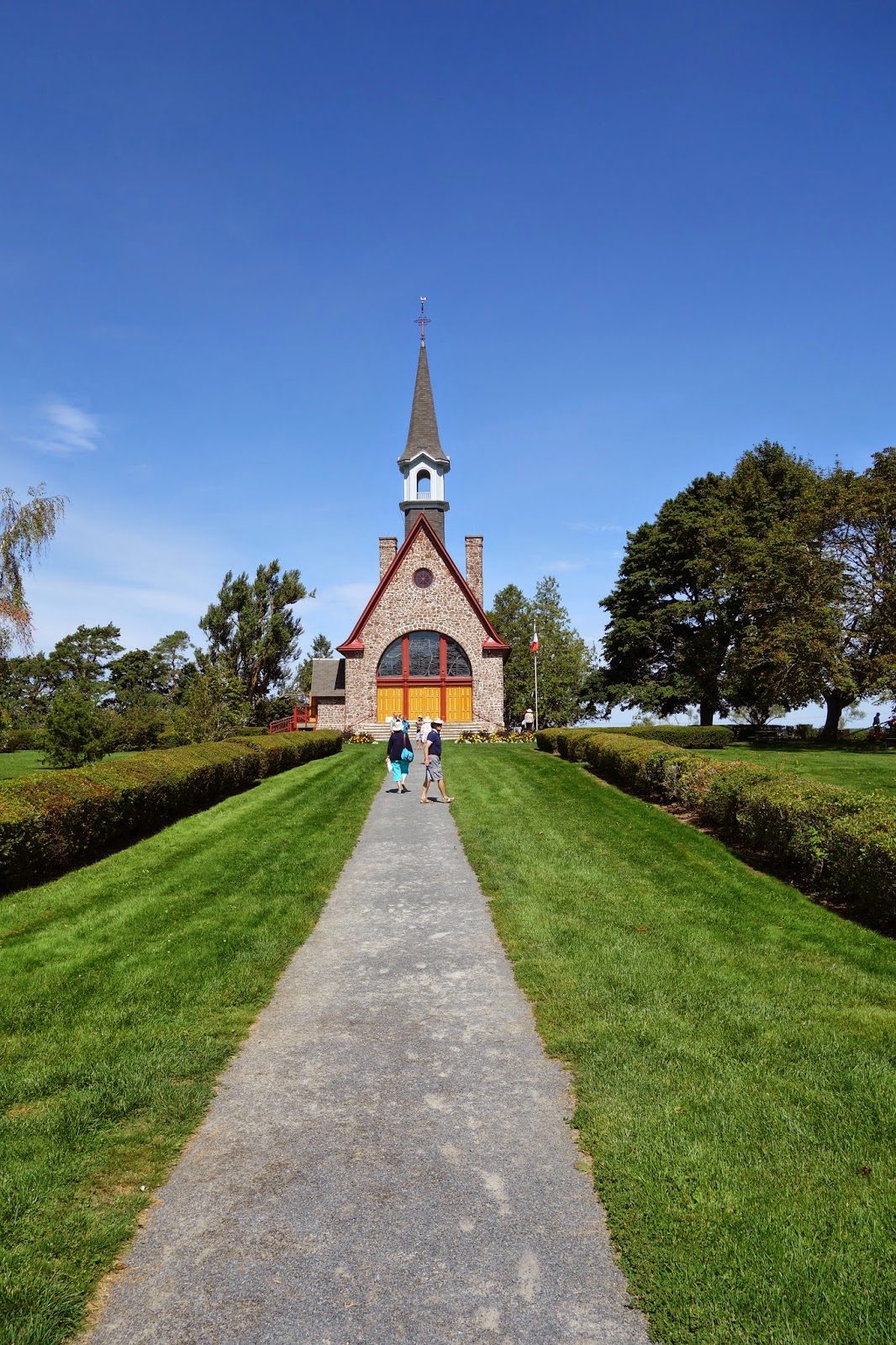 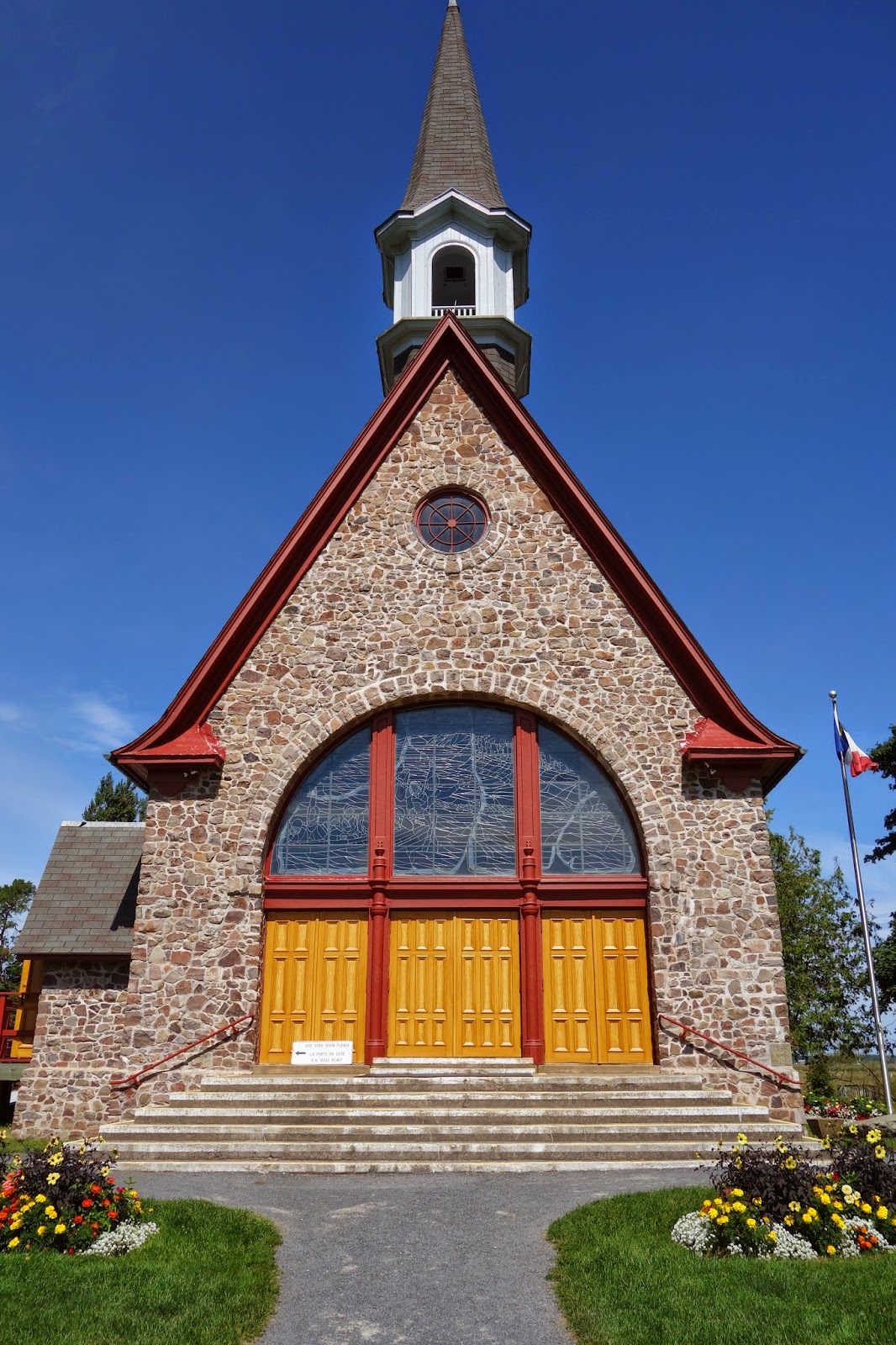 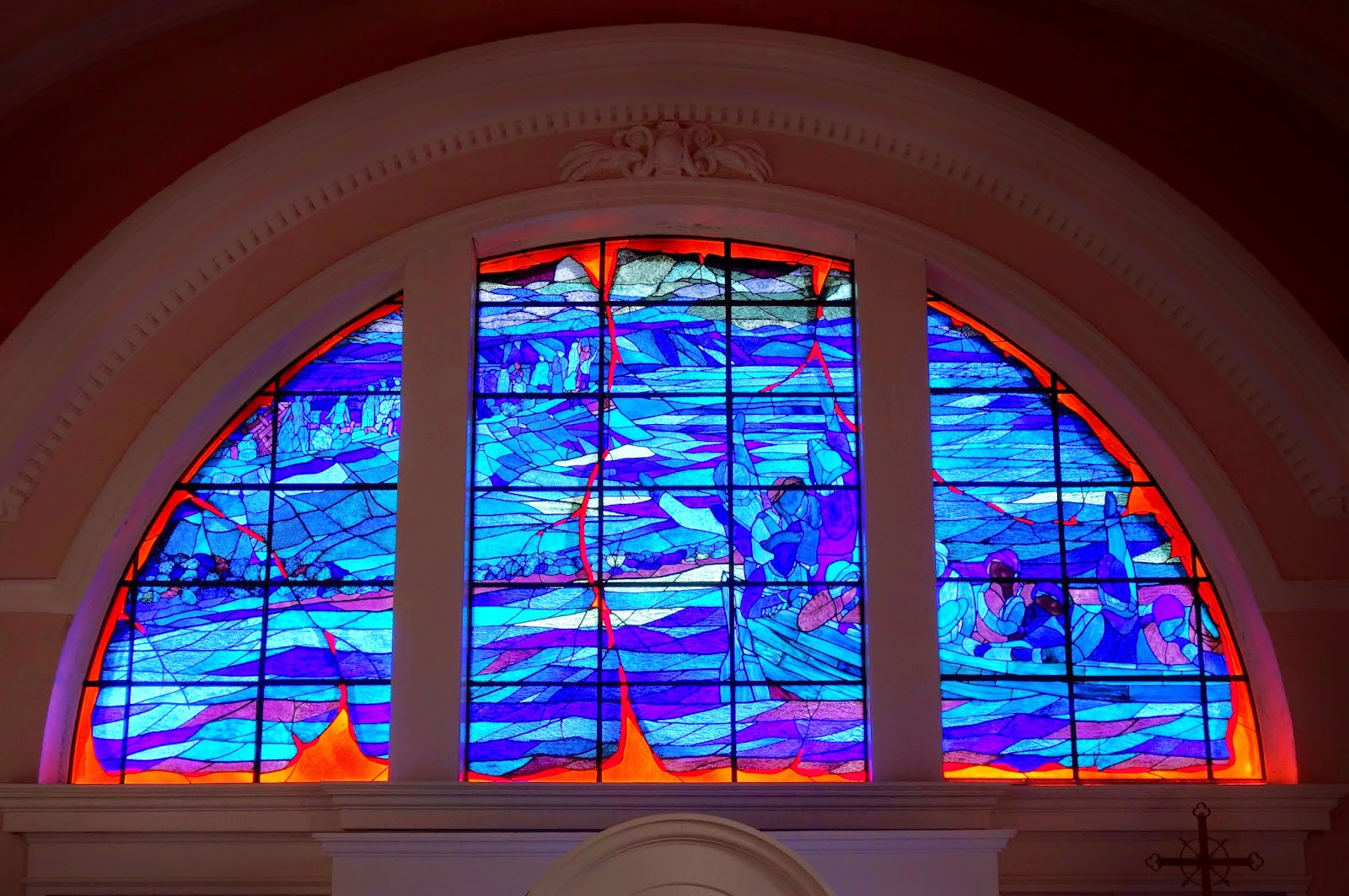 stained glass and murals from inside the memorial church- 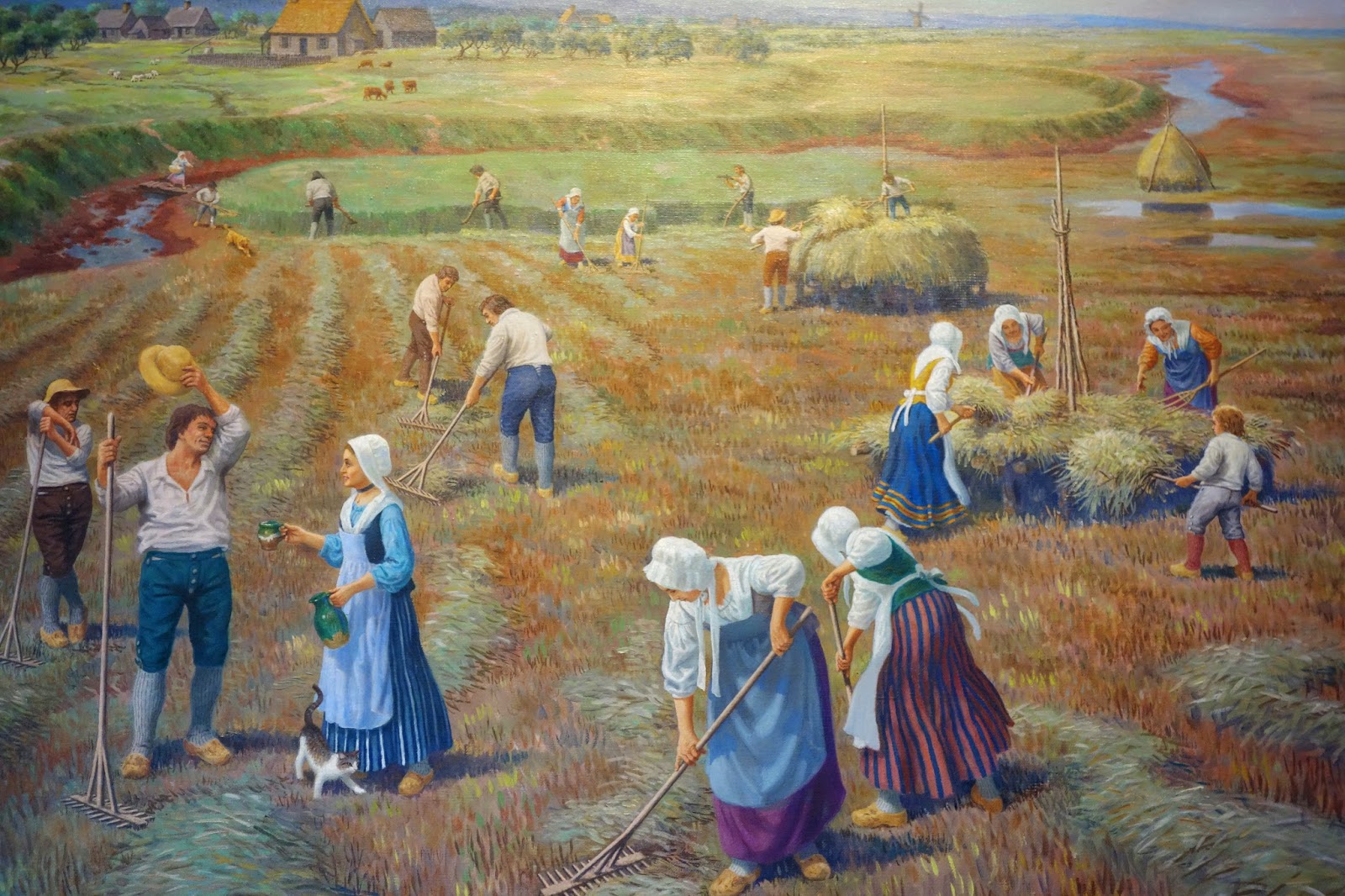 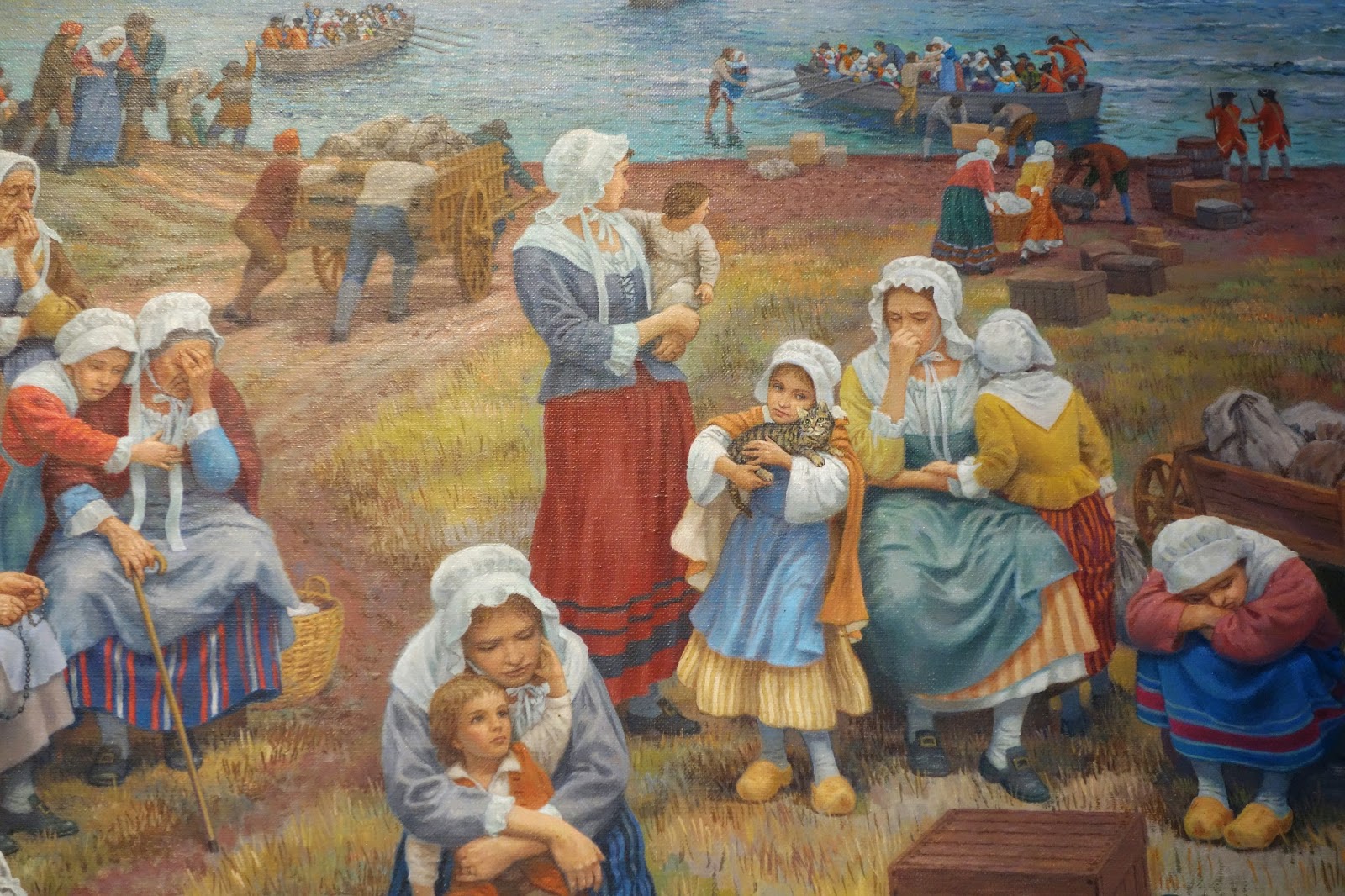 a detail that caught my eye (wonder why? LOL) 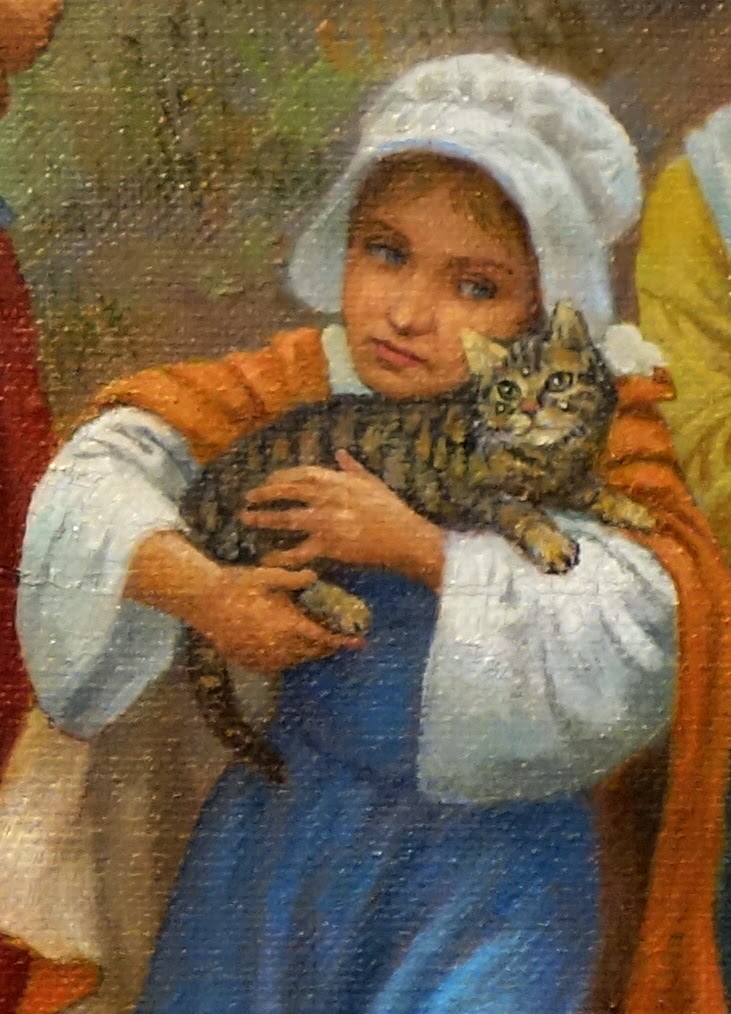 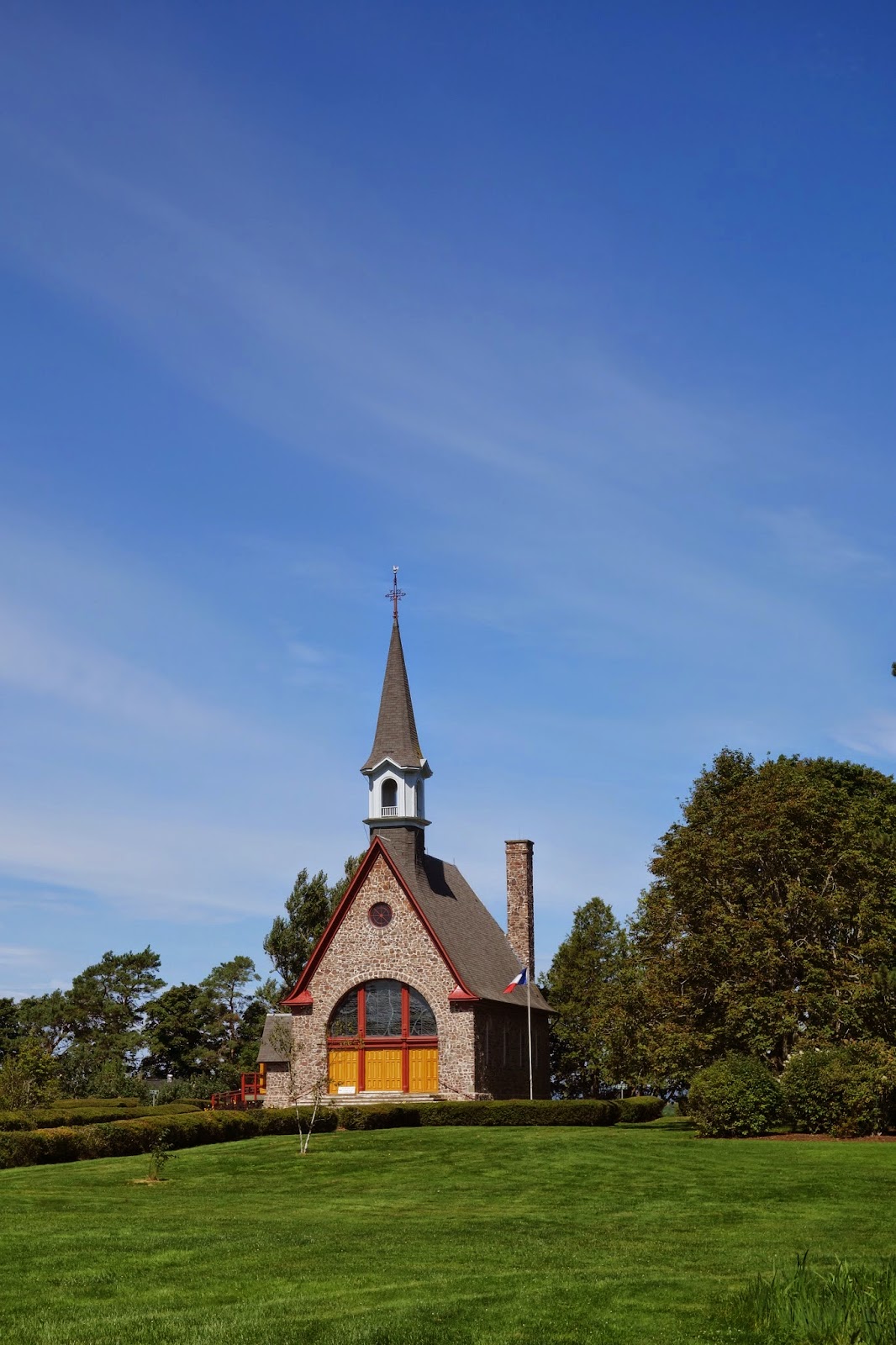 We head north to Truro for lunch at the famous Murphy's Fish & Chips- for excellent eponymous fare! 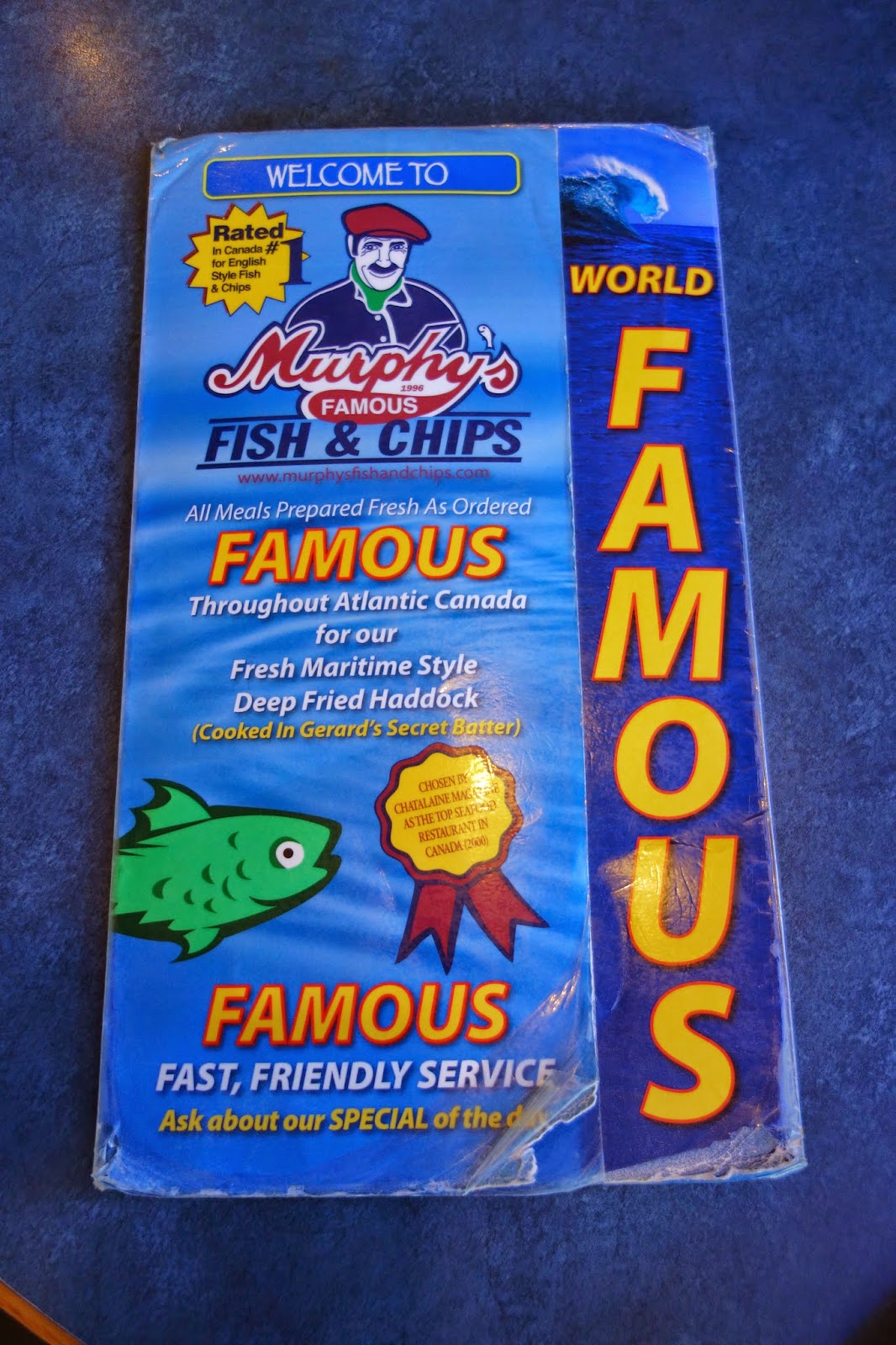 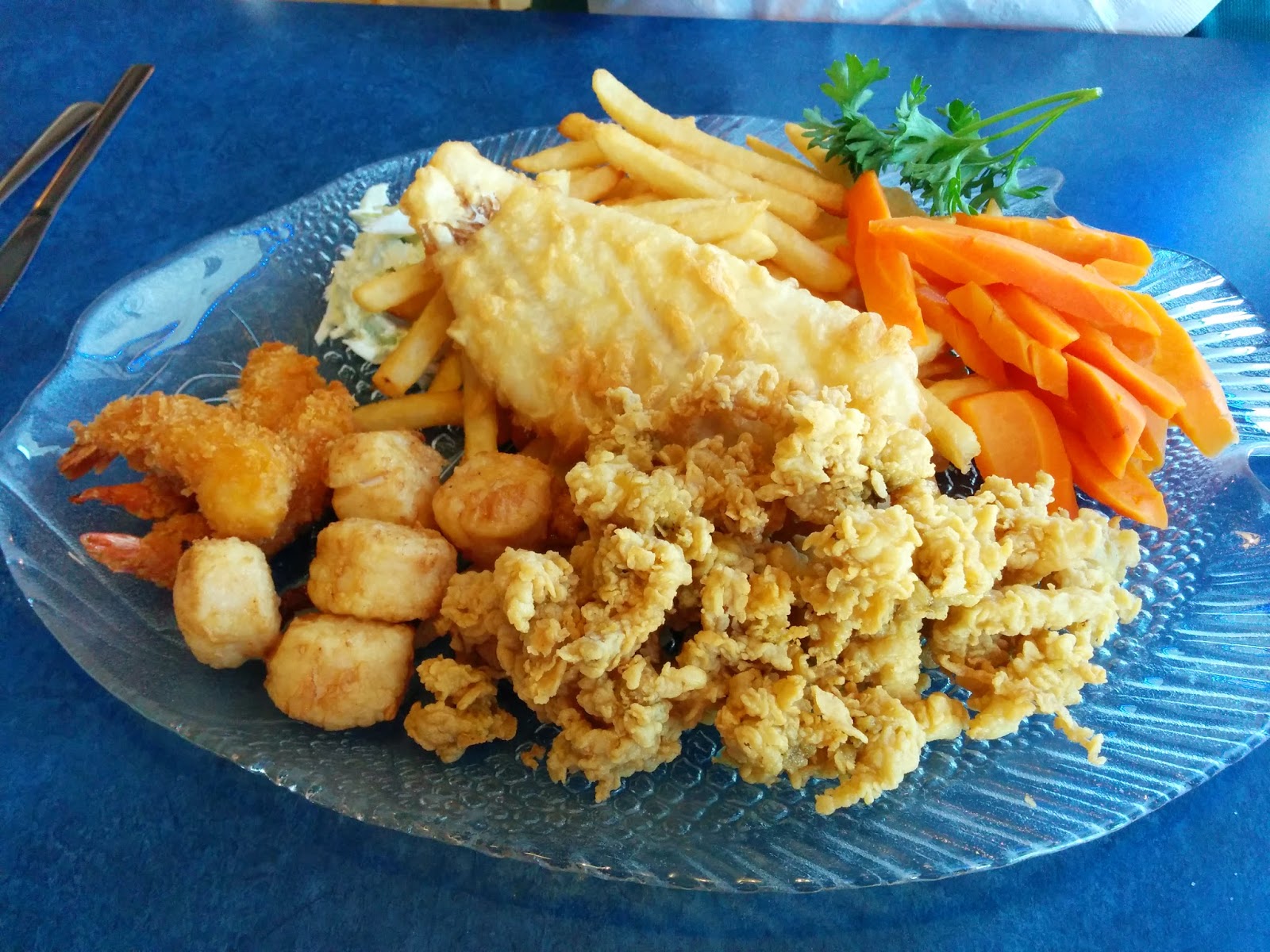 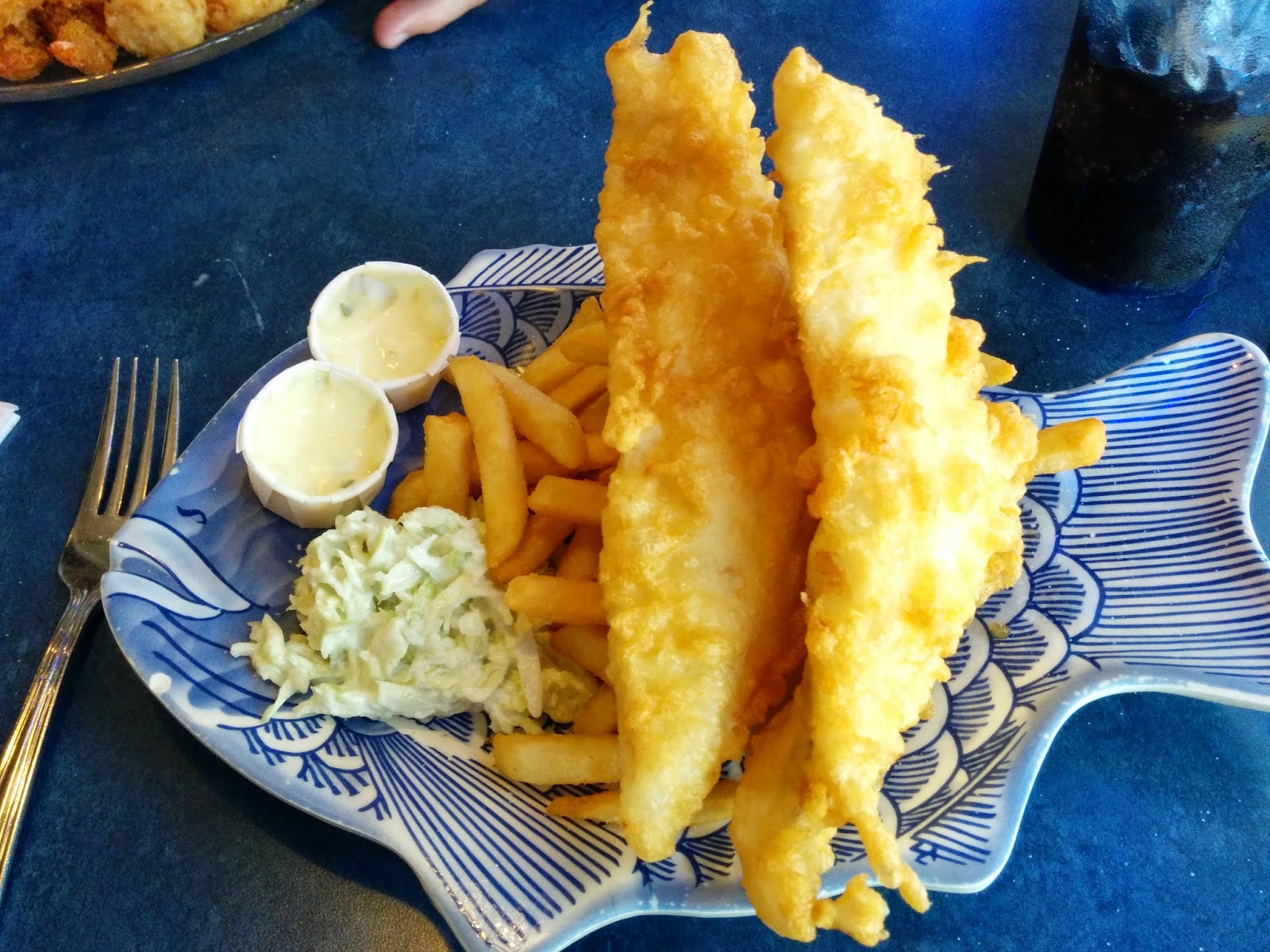 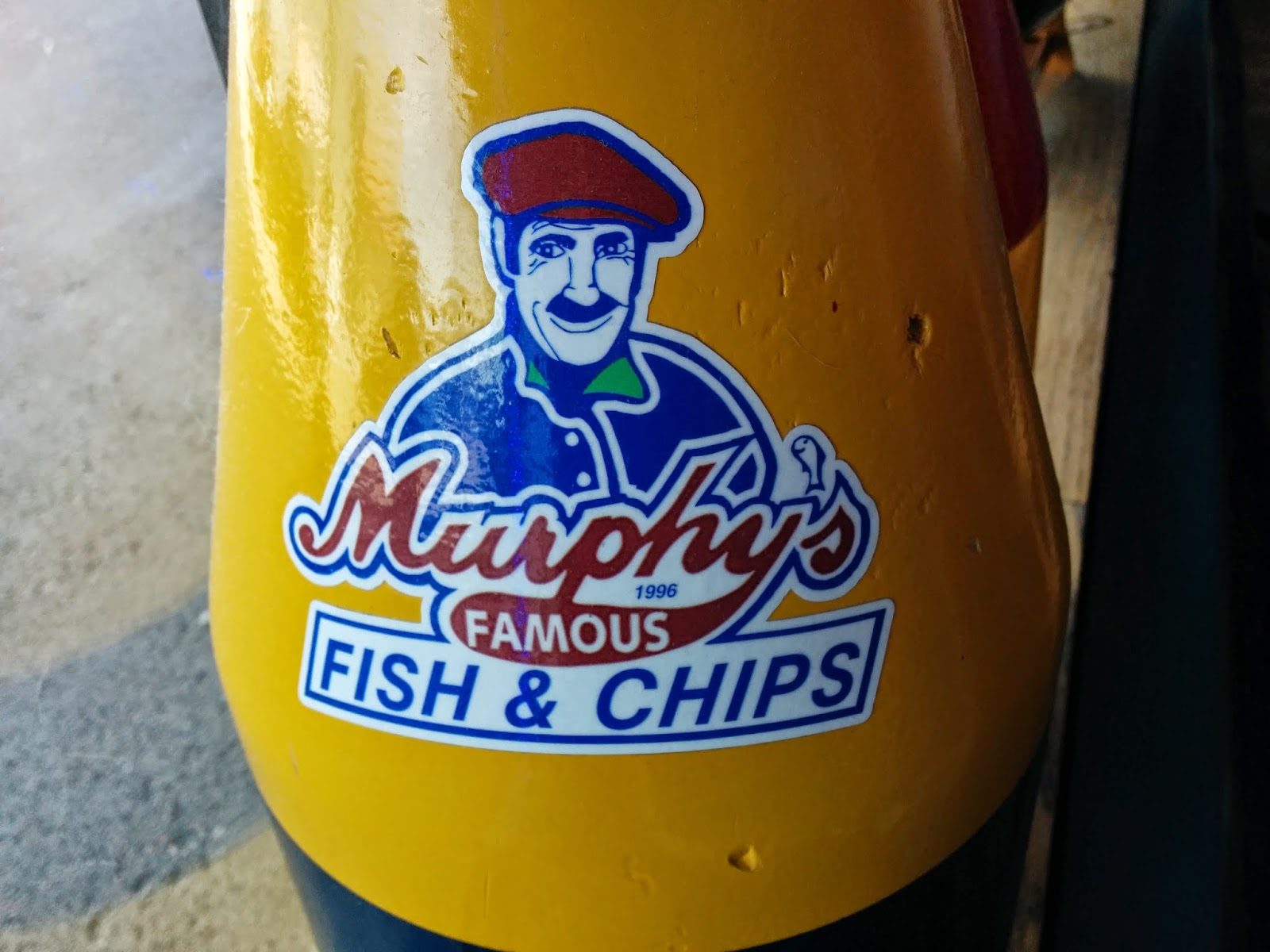 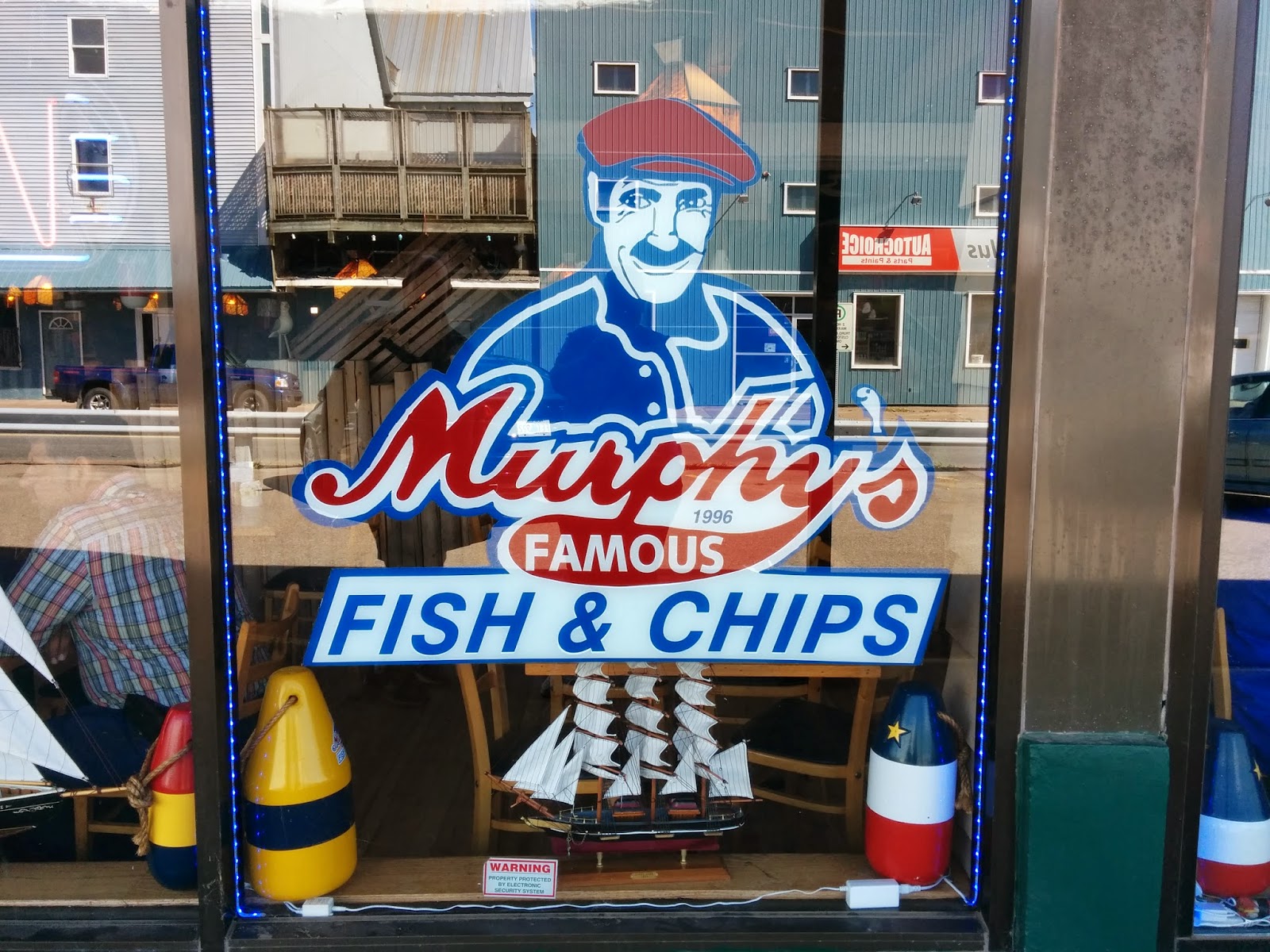 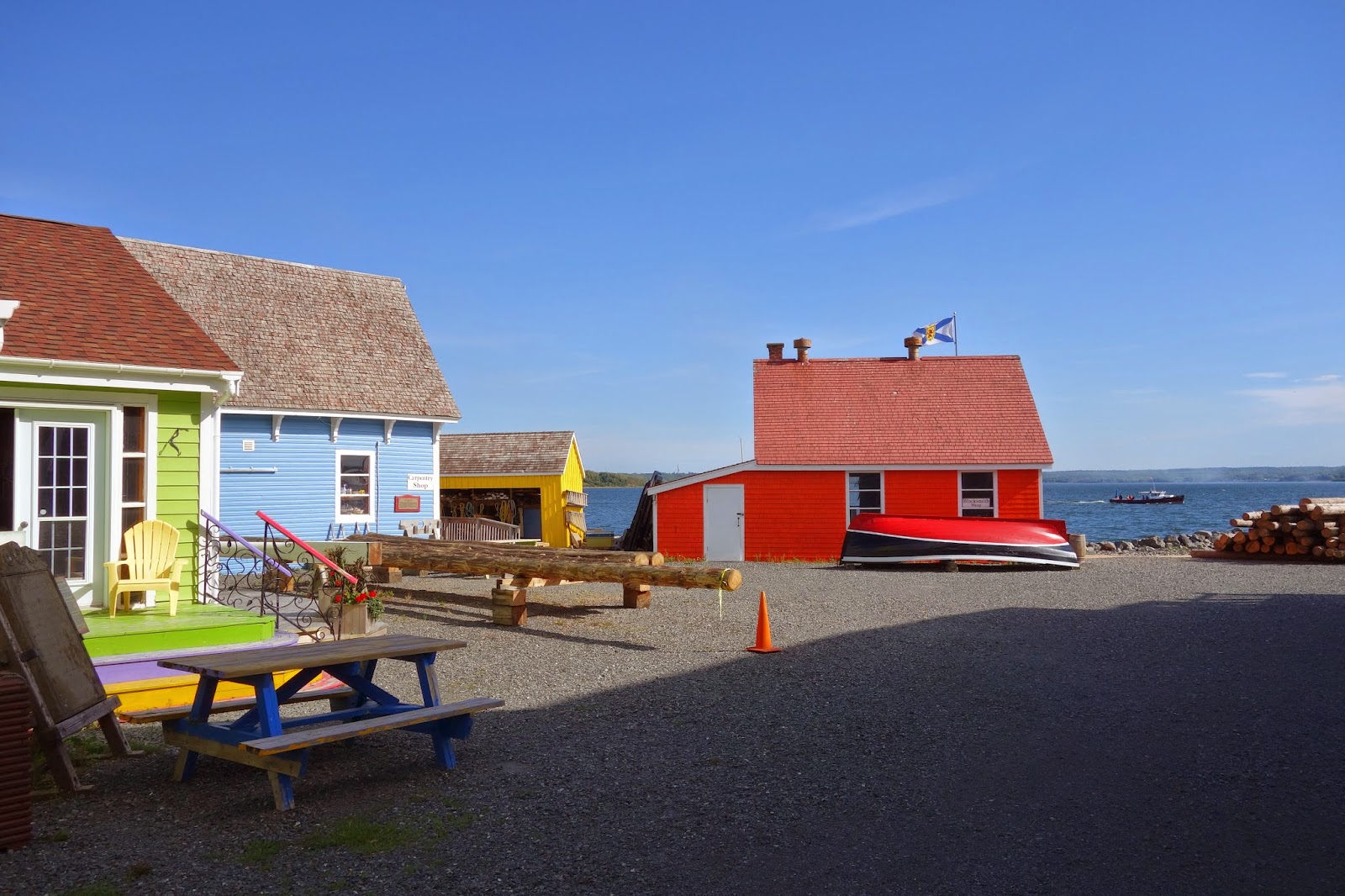 Ha! Pictou and the ship is the Hector! 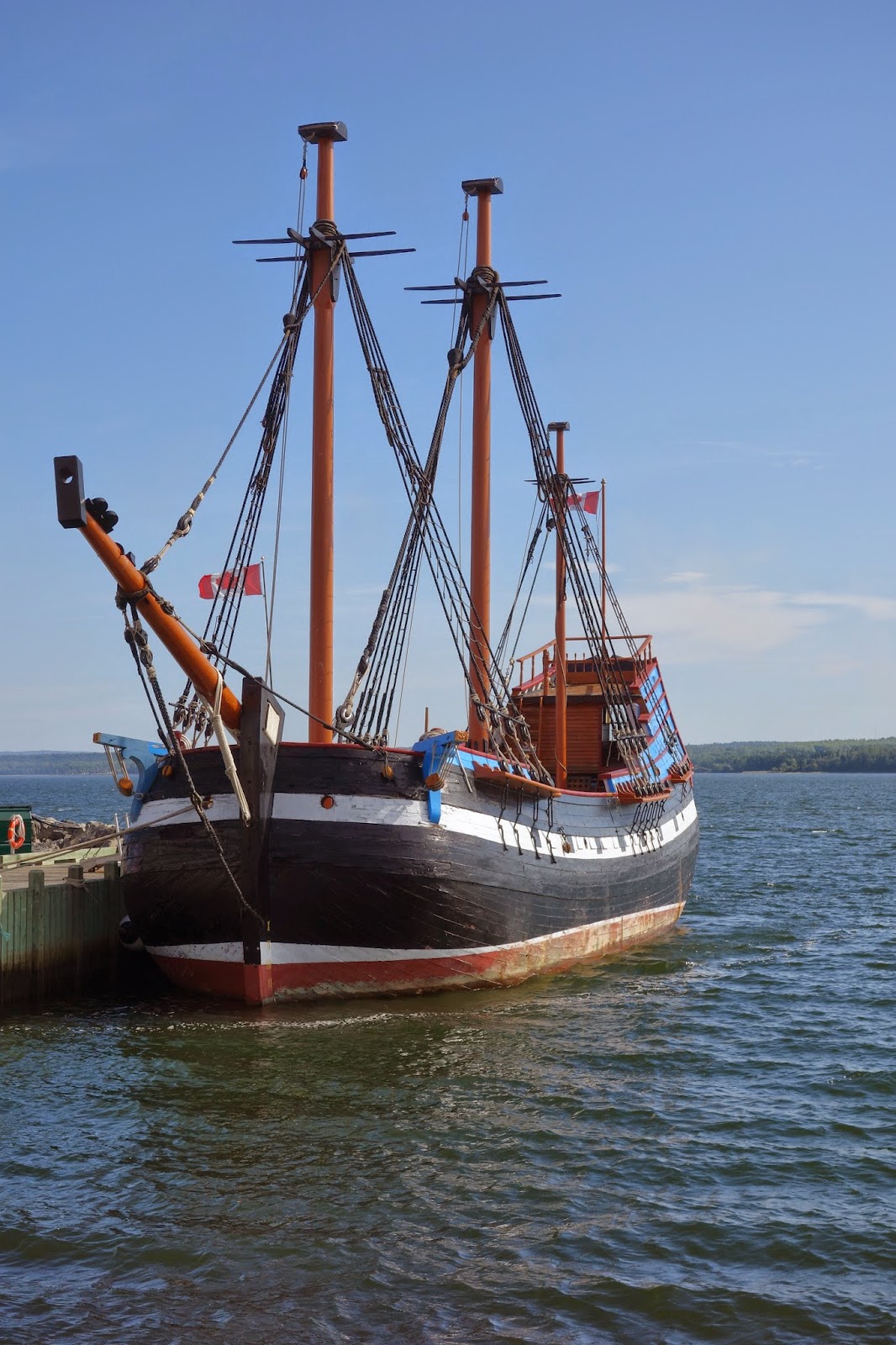 a map of where we stayed for the following two night - about midway up on Cape Breton - on the east side of the island --- far far away from anything we would label a city...LOL - as a matter of fact our hotel was literally feet away from a reservation (first nation- as they are called here...) 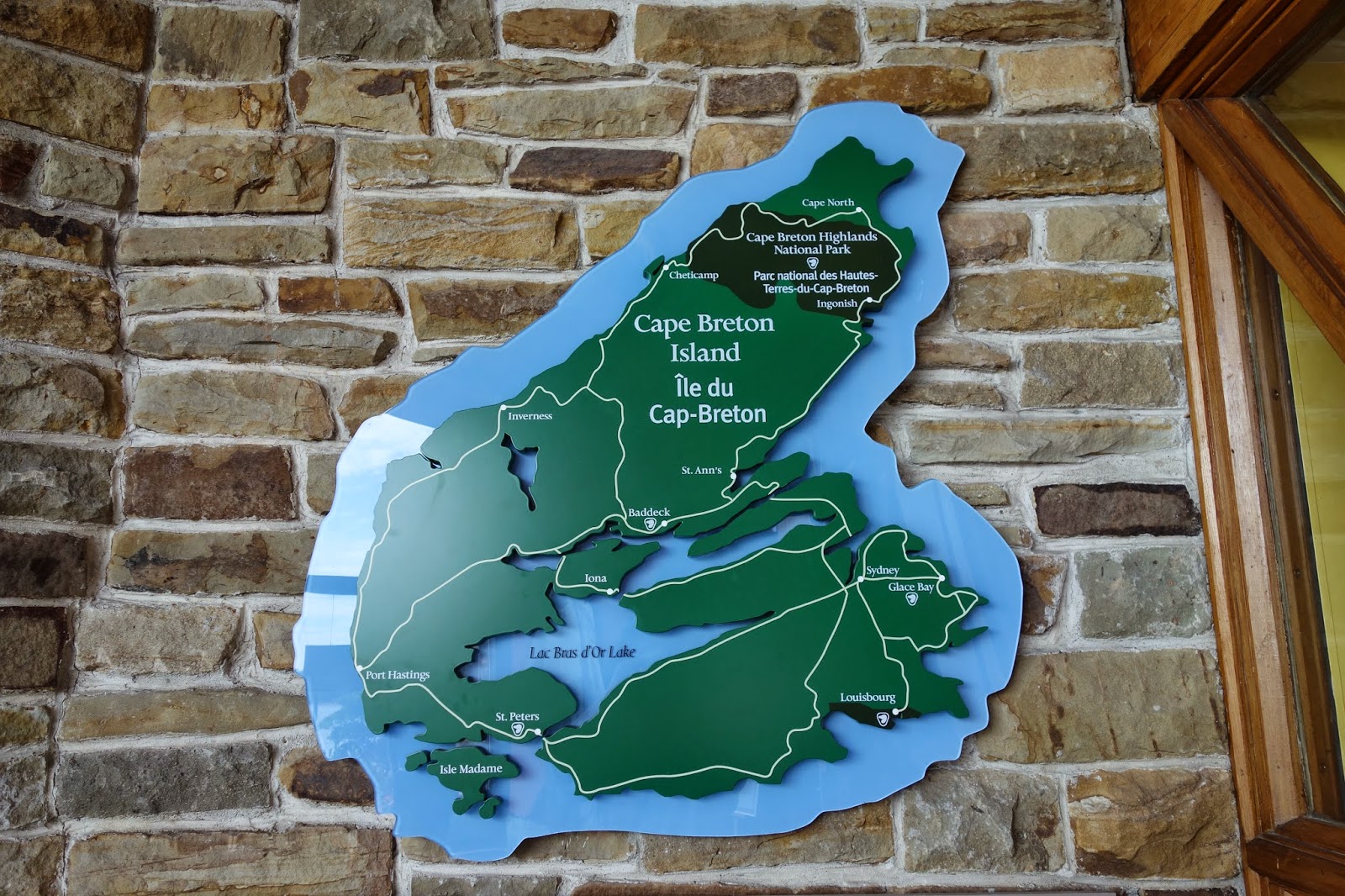 so stay tuned - next we explore the history of inventions from Alexander Graham Bell and visit one of the top parks in Canada - along with a decision not to drive the road to Hana or the Amalfi Coast...
Posted by TOR at 1:03 PM