OK - so now we can get back to details of the wonderful trip we had in the first three weeks of November.

When I left off in the last entry we had just completed time in Zagreb.  On the morning we left we found our group enlarged by two more travelers- one who was seriously annoying.  a short guy with rheumy eyes and a HUGE gold chain with an over sized pendant of King Tut's head. I don't think I am exaggerating at all by saying it was four inches tall (not unlike the giant belt buckles of the Texans who so clearly are making up for a lack of endowment in those regions-LOL) not surprisingly he spent the next two weeks monopolizing the local guides with stupid questions and inane comments.  don't you just hate it when people live down to stereotypes?  but we mostly managed to ignore him, always giving him wide berth as he did us... so no harm done overall.

our bus trip took the day, as we went from one end of the country to the other- and then literally into Bosnia where we found our boat docked in the bay at Neum Bosnia.  Bosnia has an extremely small coastline and so there is no actual port there.  they are completely surrounded by Croatia with the entire country to the north of Neum and Dubrovnik to the south- soon there will be a bridge connecting the two segments of Croatian land to each other and crossing the water leading into the bay at Neum.

we arrived after dark and took a tender to the boat where we found our cabins and quickly had dinner.  we are docked here for the night as we are headed inland to Mostar tomorrow.  we were up fairly early the next morning for the first of our sumptuous breakfast buffets- some of everything and omelets and eggs to order if desired.  then we took our little boat from the ship to the dock area and got on the bus to take us inland to Mostar.

to accomplish this one has to cross back into and out of Croatia.  one the way we stopped for fruit at a local stand that sold wares from the fertile valley below. 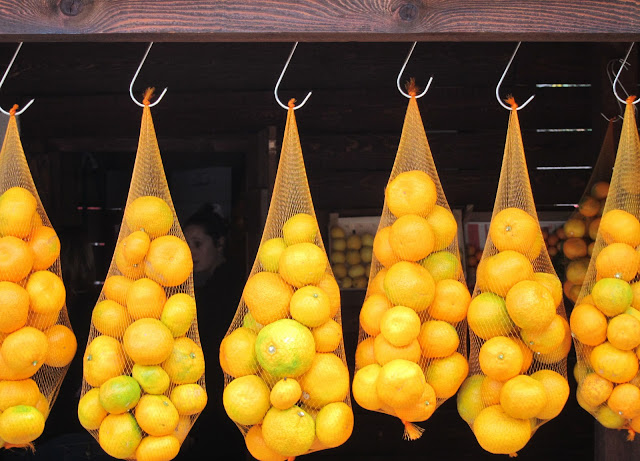 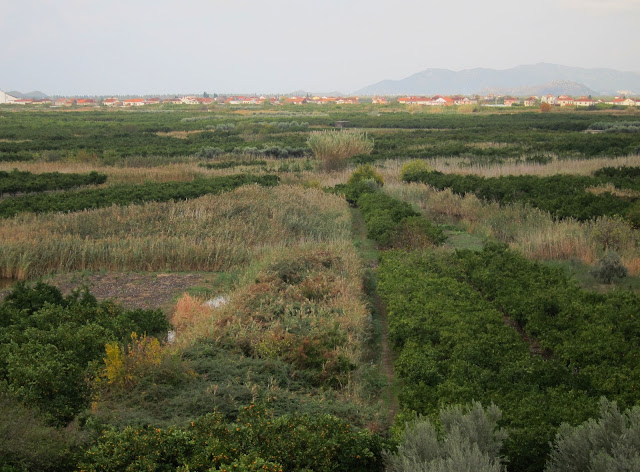 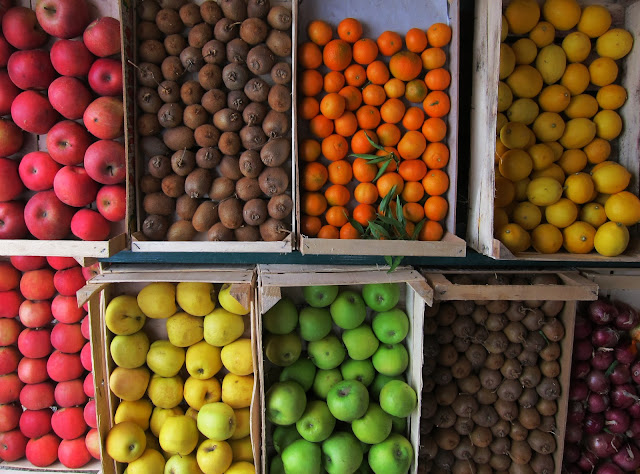 as we approached the area of Mostar we passed towns with war damaged buildings which included old fortresses and castle like structures. 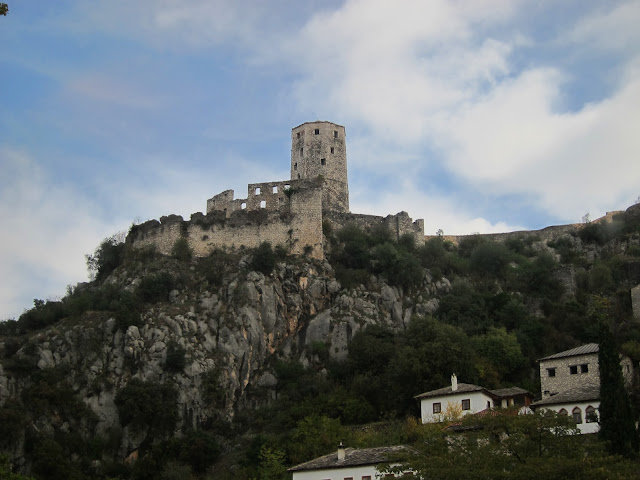 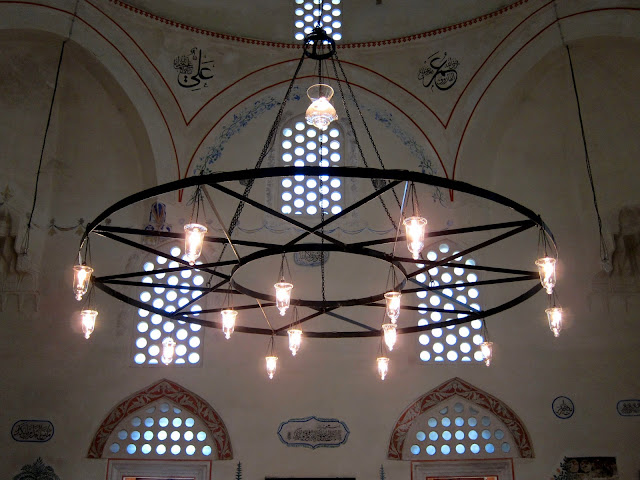 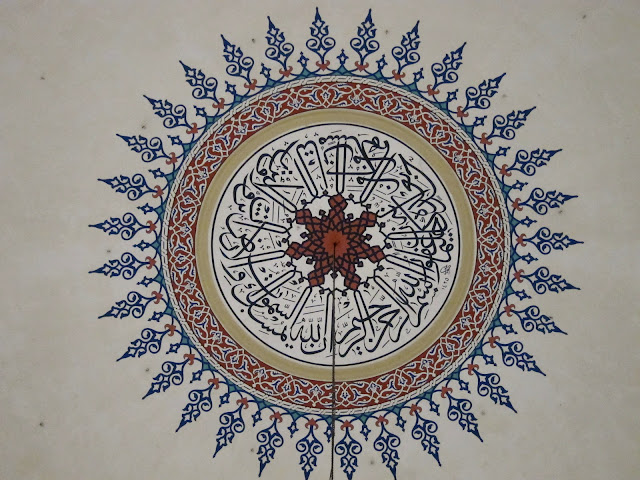 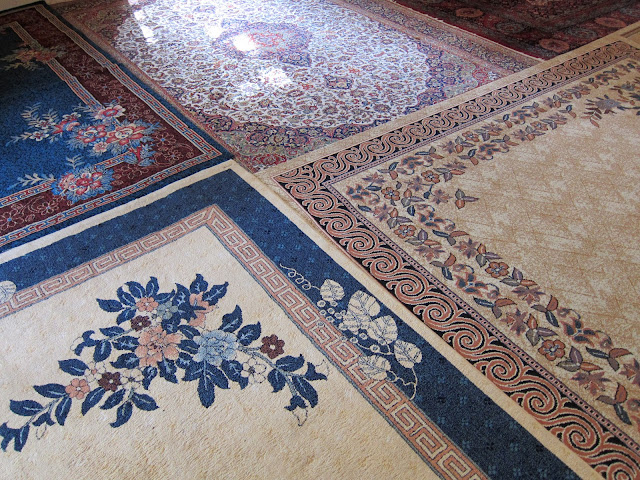 then we went to see a traditional merchant's house.  it was very reminiscent of houses we saw in Turkey. 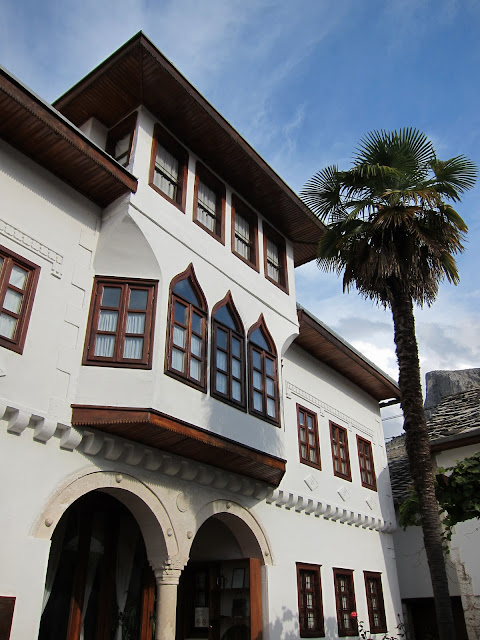 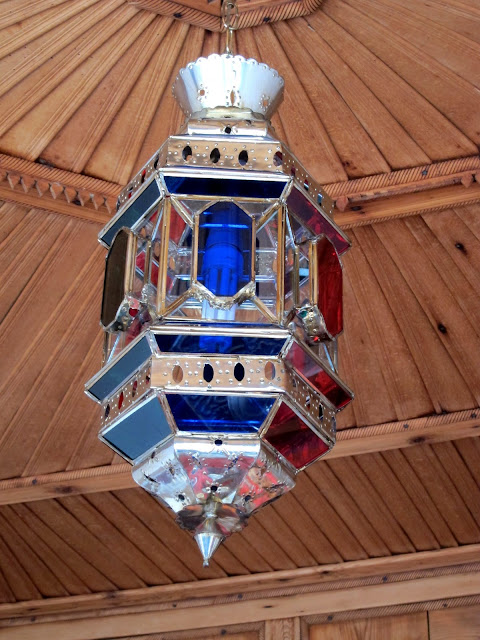 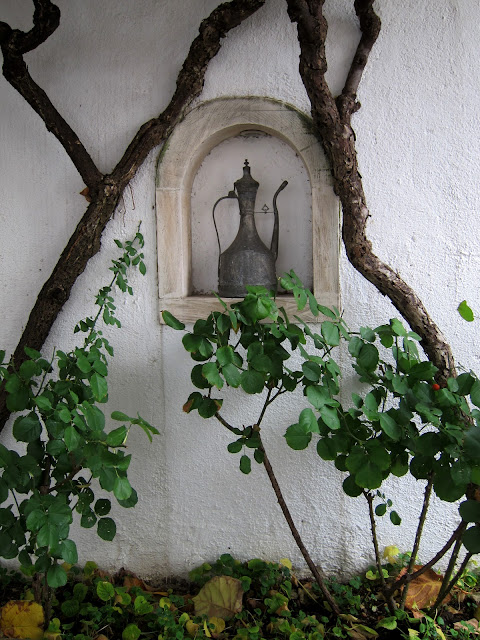 then on to the center of the old city and the famous bridge.  built in the 1400s it was already a UNESCO world heritage site before the war destroyed it.  it took longer to rebuild than the original period of construction (modern technology isn't amazing isn't it? LOL) 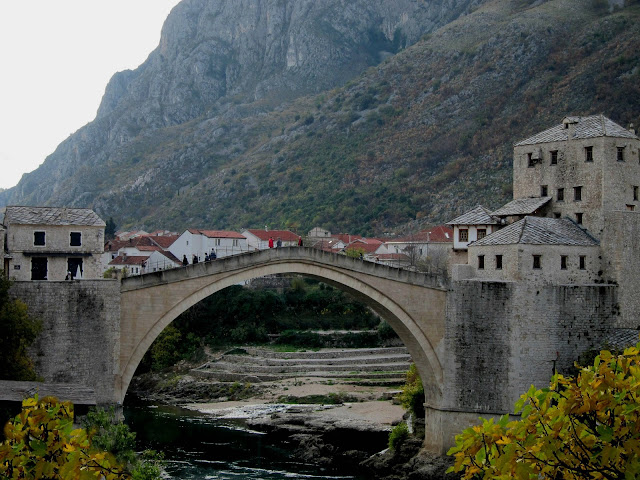 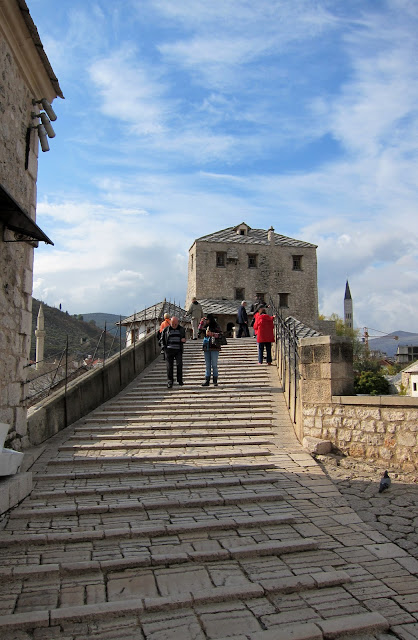 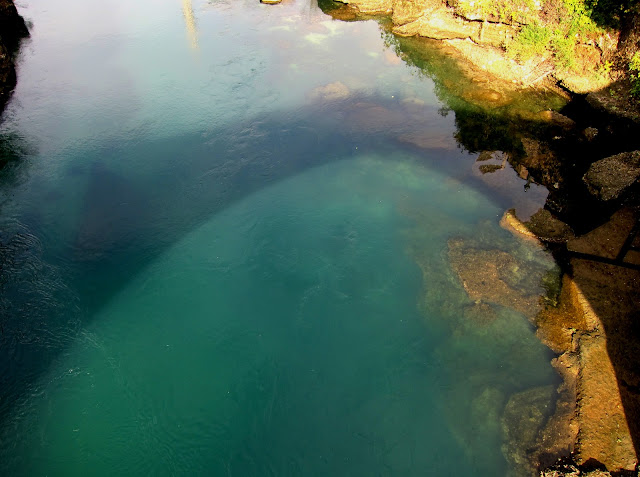 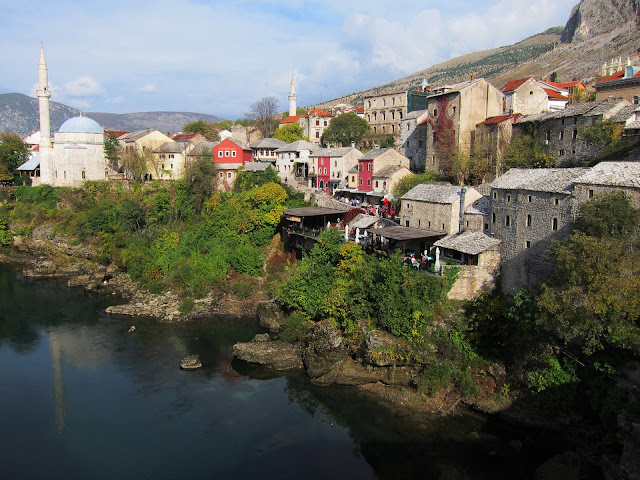 the view from the bridge (above and below) 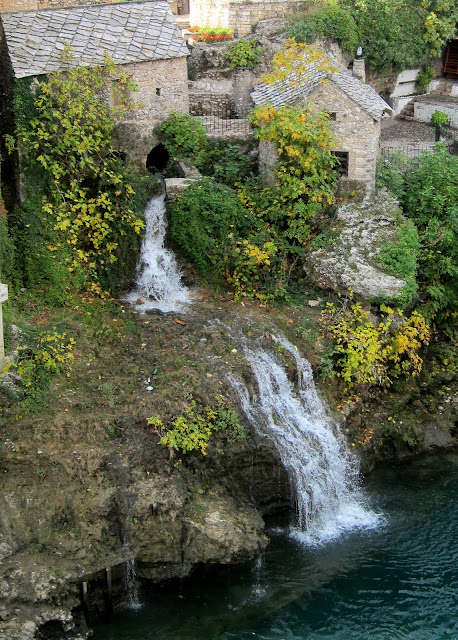 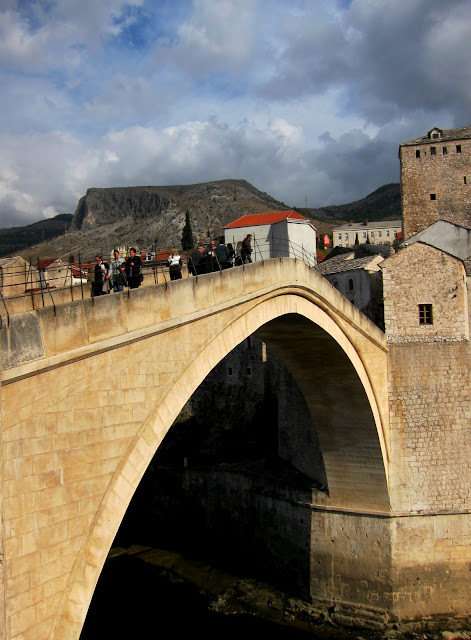 the area has long been an Islamic pilgrimage site and so the center of the town has always been a tourist "mecca" - if you will excuse the pun... and it to this day is over run with touristy souvenir shops and tchotchkes for sale.  our local guide commented that it was so crowded even off season because many Turks were visiting due to an Islamic holiday. 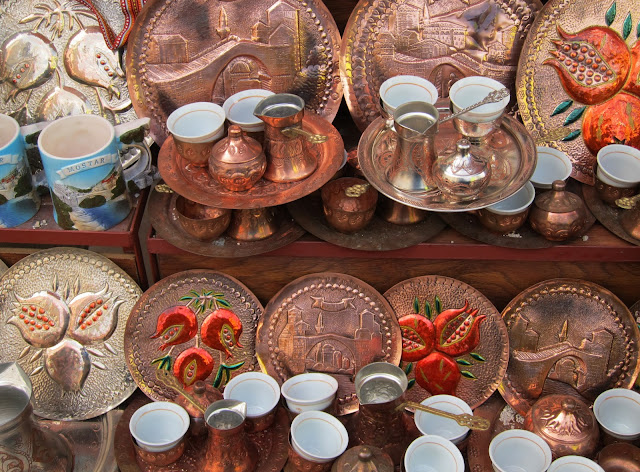 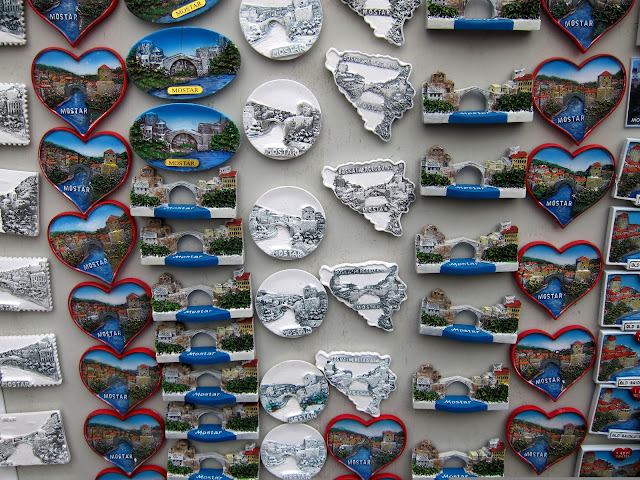 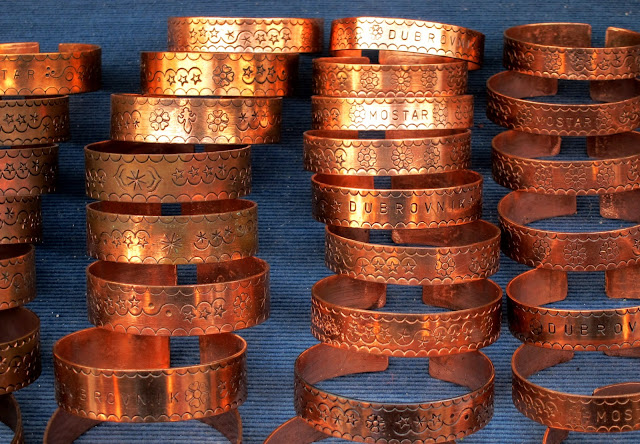 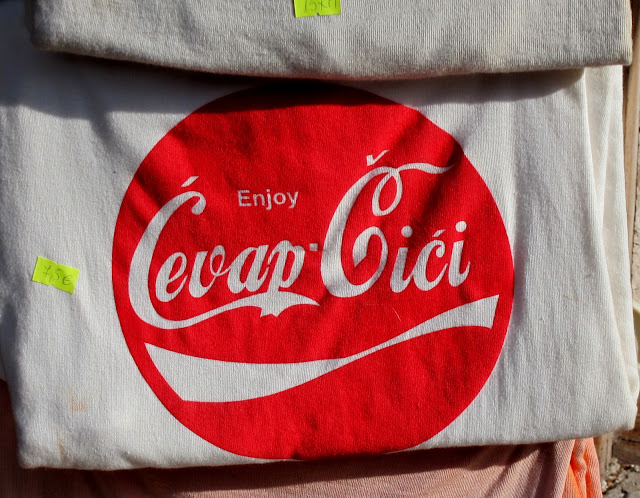 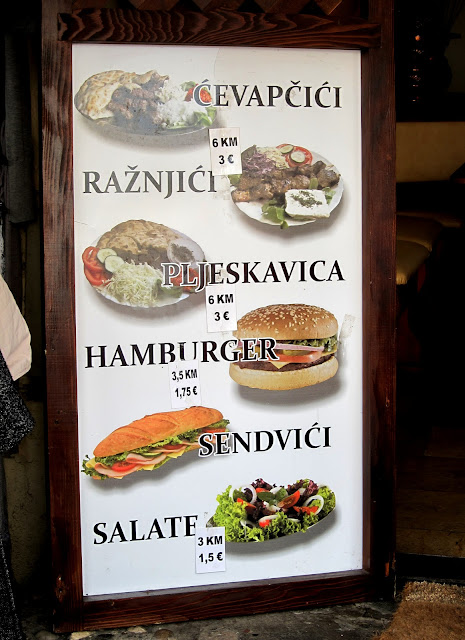 we had enough free time to explore the area and scatter a few of my mother's ashes under the famous bridge.  so now she can add Bosnia to her countries visited :-).

we left in the early afternoon and headed to another town where we had an OK lunch at a riverside restaurant.  the food had been better at yesterday's lunch of "veal under the bell" which we eaten in Sibenik on the way south. 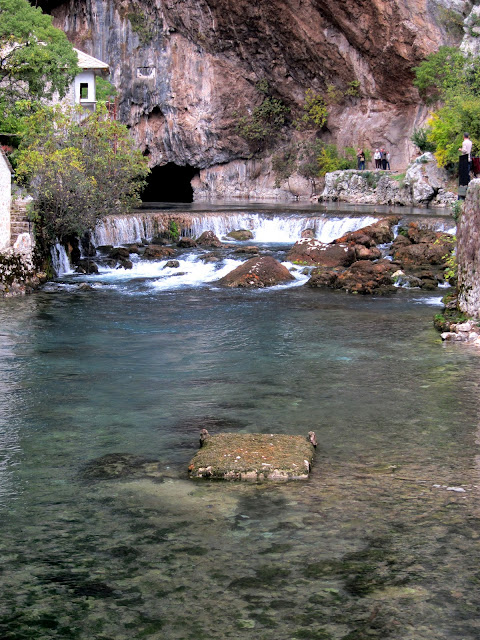 back later to our small ship the Artemis and to the welcome dinner - safety briefing and our first setting sail!
Posted by TOR at 9:40 PM