We arrived in Split mid afternoon 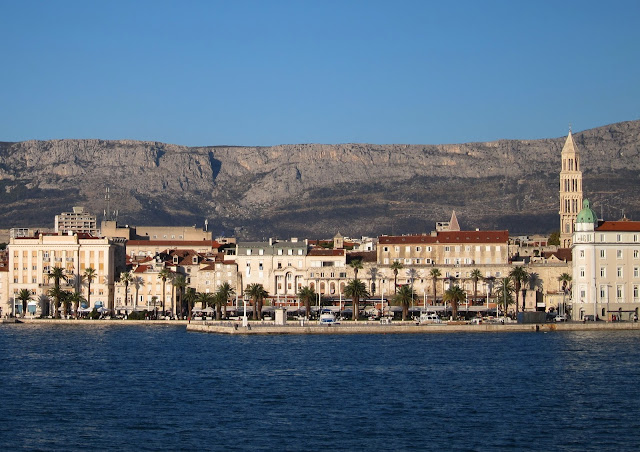 Split is a beautiful city that has grown even more lovely since my last visit in 2005.  the waterfront "Riva" has been remade into a grand promenade pedestrian area lined with open air cafes where locals while away their time drinking endless thimbles of espresso....we kept wondering whether they ever work?  the guide said "not much this time of year" many make livings in tourism and when the season ends they take it easy. 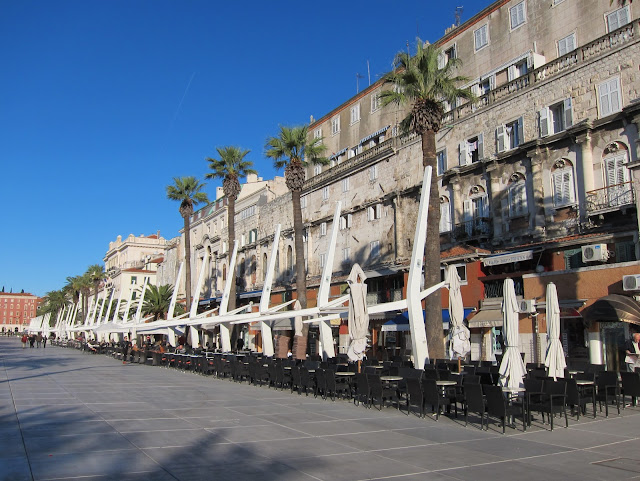 since the weather was glorious the whole time we spent on the Dalmatian Coast- in the low to mid 60s and sunny- we did our best to join them as frequently as we could. 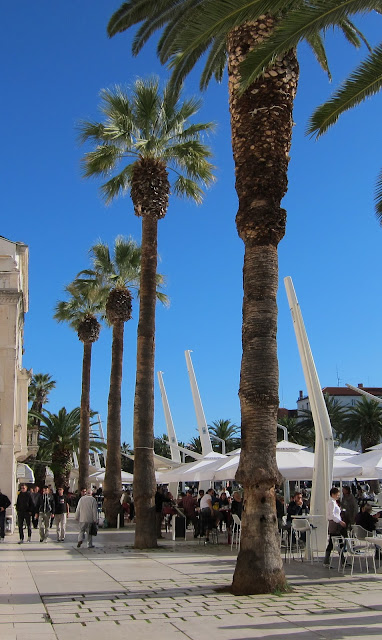 Split is a city built around the Diocletian Palace of Roman times.  the former emperor built his retirement villa here as things were waning for him in politics of Rome.  The whole of his HUGE palace has now become incorporated in the most delightful way into the old town of the living city.  a map shows the old city and the yellow outlines the footprint of the palace... the two roads of every Roman city cutting through the heart of this palace as well- the Cardo and the Decumanus. 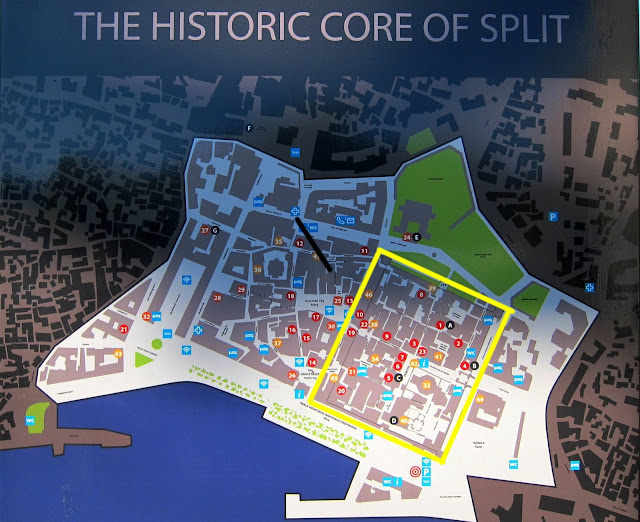 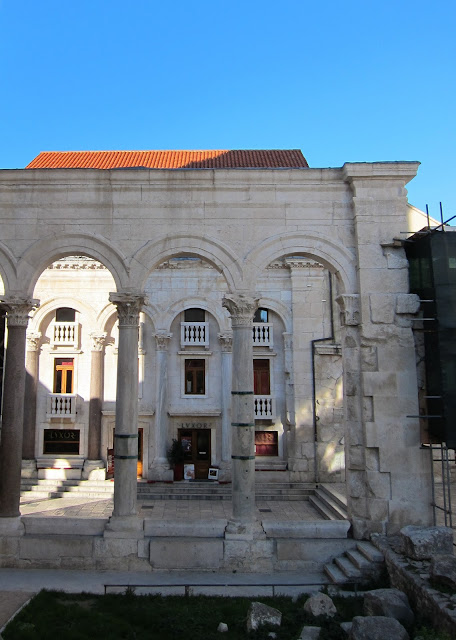 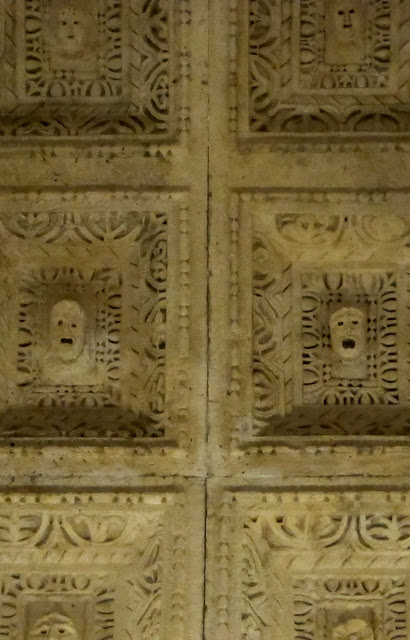 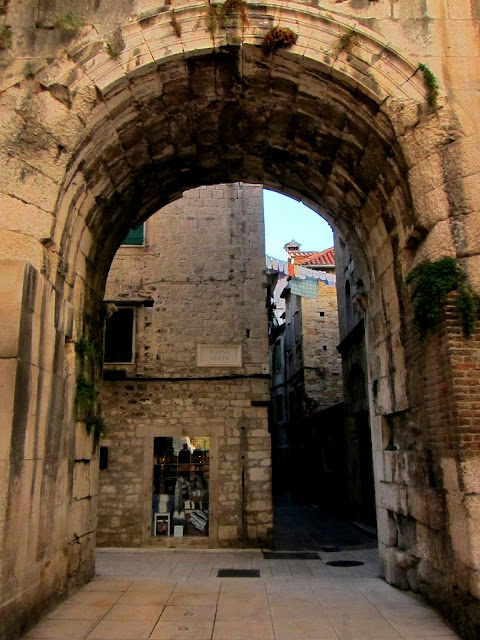 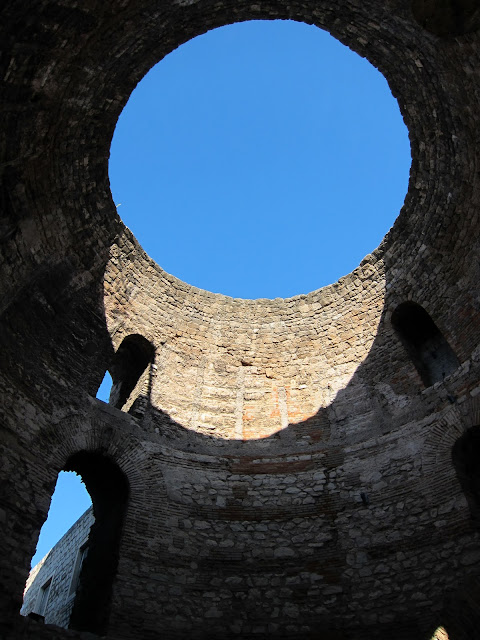 in this beautiful rotunda- we heard the guys below singing acapella - it was magnificent- they were fabulous! 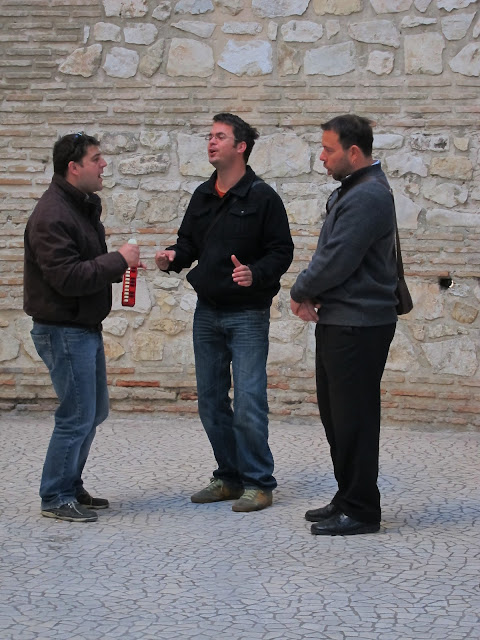 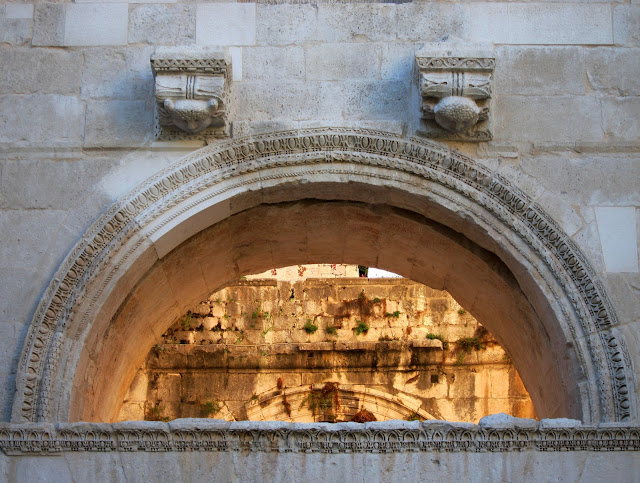 the stones and walls and temples are incorporated into current structures including the cathedral. 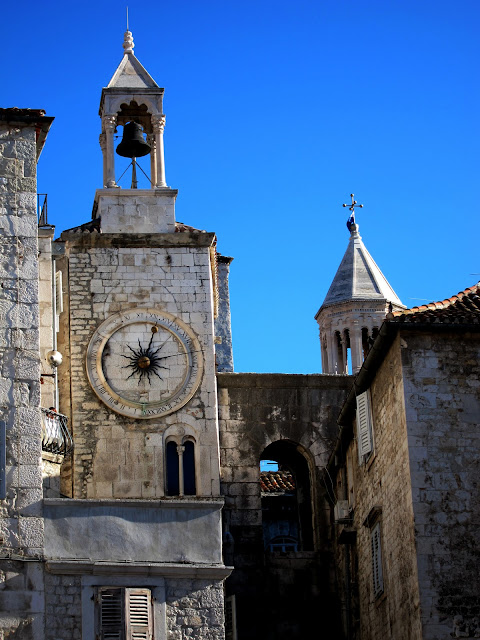 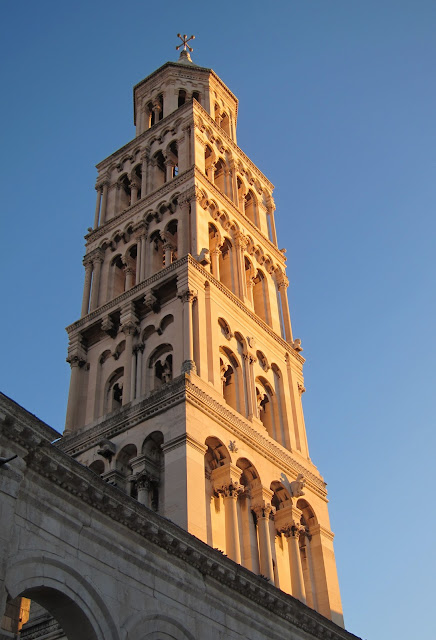 Diocletian was NOT a good guy- he killed virtually all of his family for become christian so there is some small irony in the fact that his tomb has been turned into a little gem of a church in the center of the town/palace. 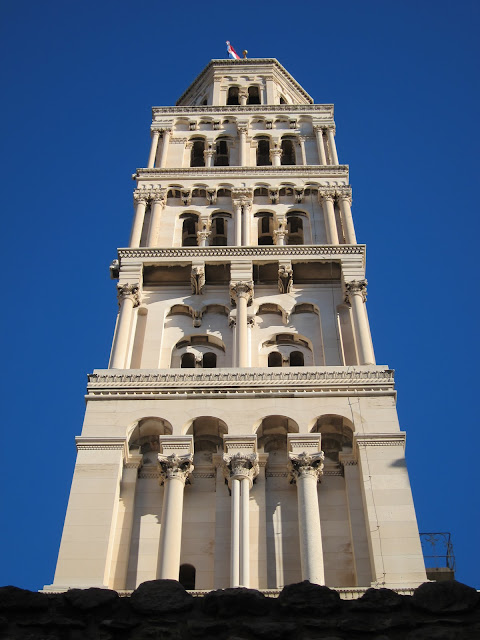 we spent our time in the market, had a local pizza, explored a bit in the Venetian era "middle city" and visited the synagogue. 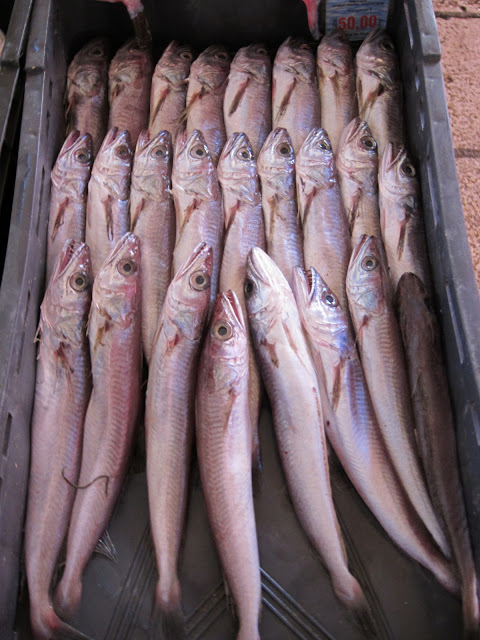 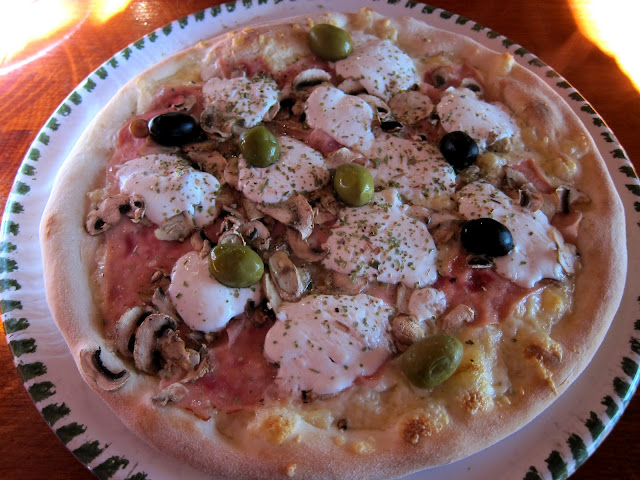 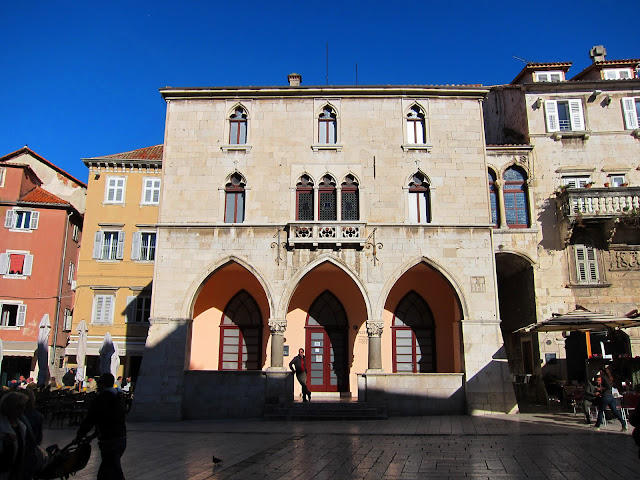 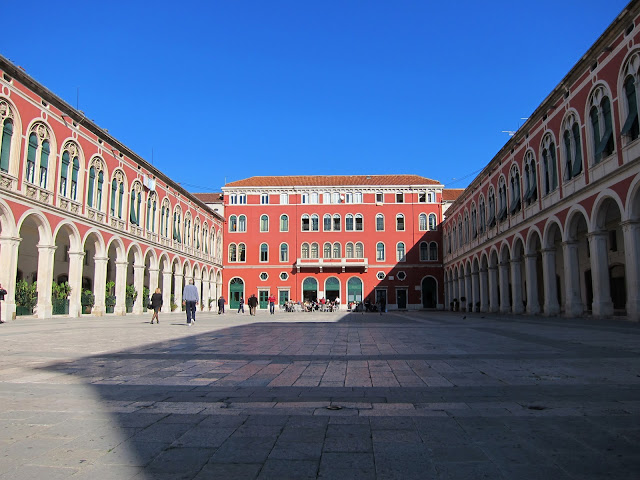 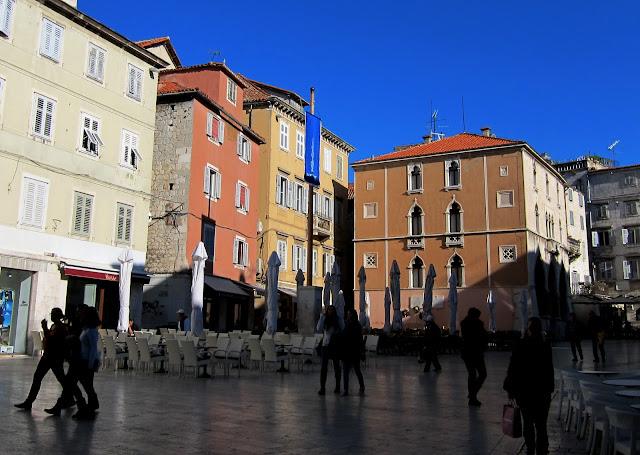 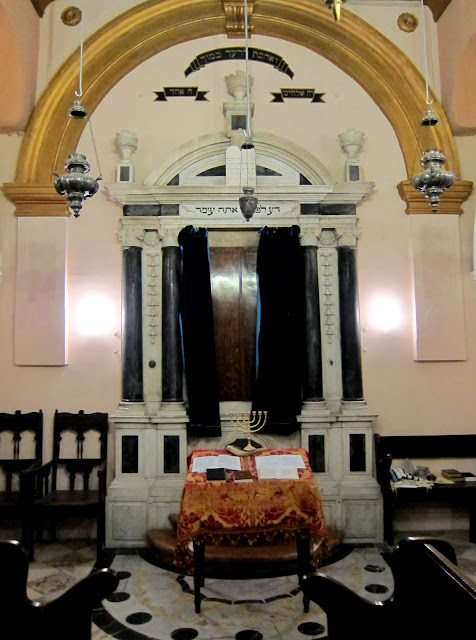 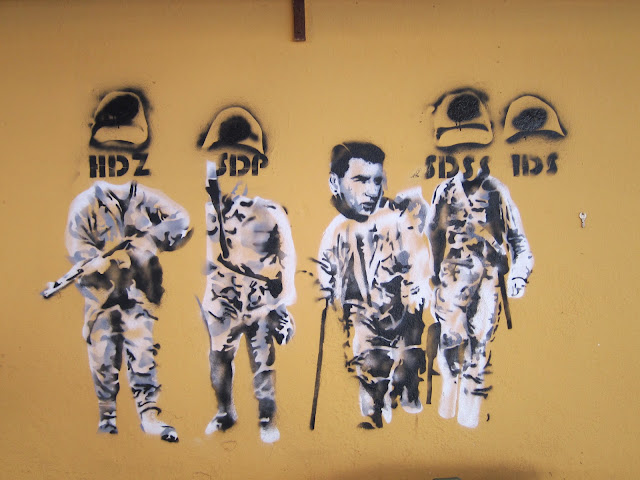 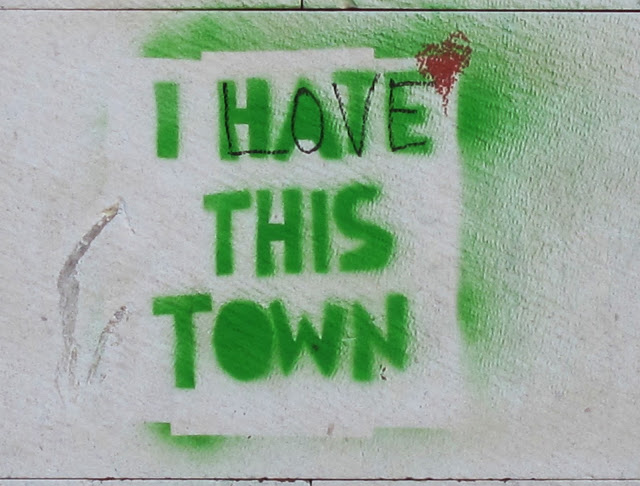 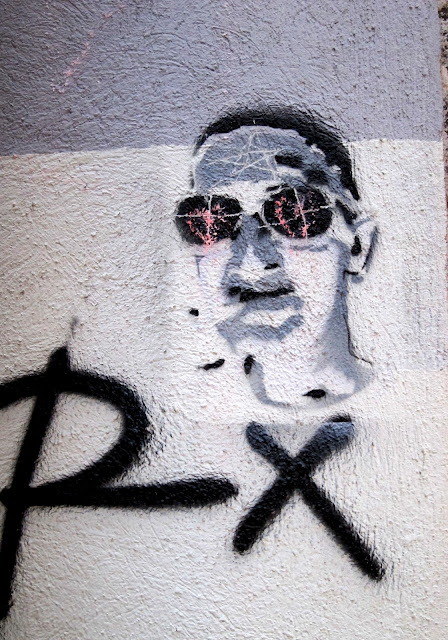 as I walked back to the ship- leaving Phil at the Internet cafe... I came across this great shot of three colors of tug boats- (black red and green) 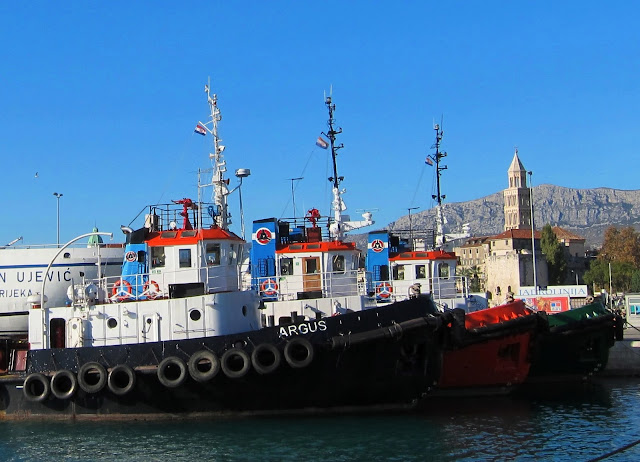 and on our way to the hole in the wall (down an alley and into a basement) Kod Joze restaurant, we used this statue by Ivan Mestrovic as our landmark - it is of one of the bishops that Diocletian killed in his rampage against Christianity. 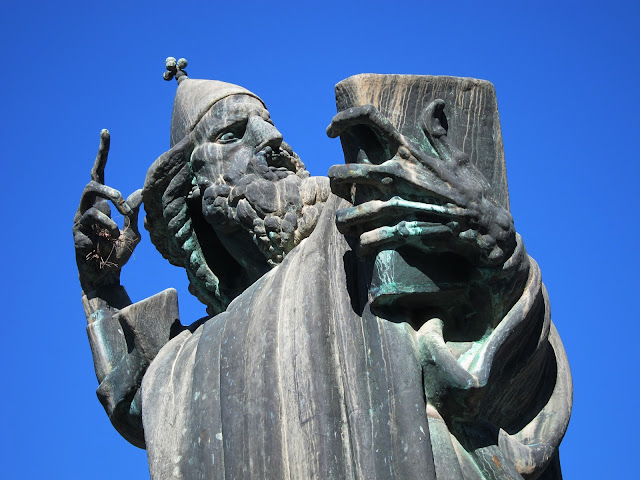 the food was excellent but the portions were enormous.  we had some fabulous mussels and risotto and one of us had pasta and another had the wild boar-- altogether the four of us had food that could have easily fed eight... but the waiter didn't tell us until after the meal - LOL- when he said "next time you order 1 for 2"  by then he had made his sale- LOL 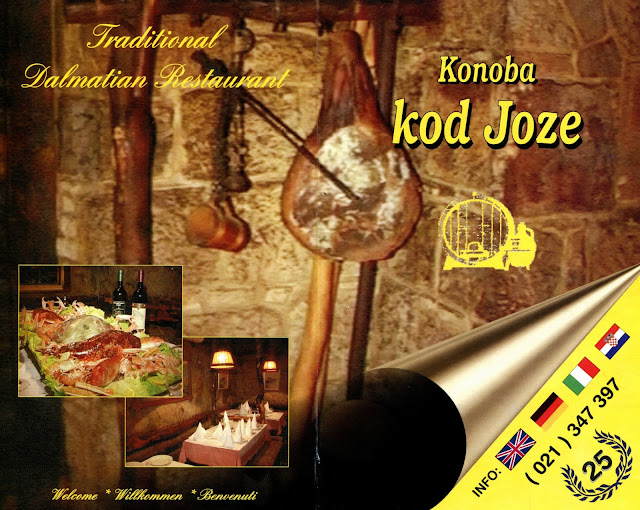 our next destination is Sibenik where we will see the town and then go out into the countryside to visit a park with a well known waterfall.
Posted by TOR at 10:33 AM