so after filling out waaaaay too many forms to go from one part of Ecuador to another part of the very same country and standing in waaaay too many lines for waaay too many stamps and taxes paid etc... the let us on the Galapagos Islands.

I did not view this as a positive start but rather out of sorts about the dearth of animals in the Amazon (no thundering herds there- nor Woody Herman for that matter- LOL) I was looking forward to some real up close and personal interaction with the natives (wildlife not humans- which of course there are NO actual human natives on these islands as we later learn in the detailed and convoluted history of settlement here when we visit Floreana Island.)

the group consists of 16 travelers - 4 from Holland (brother and sister and respective spouses) and a group of 6 relatives/friends from Wisconsin and California (of which there are sisters and some work colleague relationships etc...)
4 old dear friends who live in NY/FL and FL/CO - the gals went to high school together and then the two of us...."a married couple dressed as a moose" (oops no- that is someone else's joke- LOL)

we take a bus from the airport to a dock where the ship is in the harbor and get our first taste of "on the ship off the ship" in the "panga"  - little did I know back in the Amazon that I would very soon be yearning for our little canoe with the blue plastic tarp roof and the actual wooden board benches- LOL....

unlike the Manatee Explorer which had past its prime - this ship (we are now on the ocean and there have switched nomenclature from boat to ship) is new and spiffy...

so let's stop the narrative for long enough to catch up on a few photos- first some of the paperwork you need to get here- you can see we have a 100 ticket and a different 10 dollar ticket and another 100 dollar ticket with our cabin and boat noted--- lots of paperwork - you would have thought we were in Bolivia or something....LOL 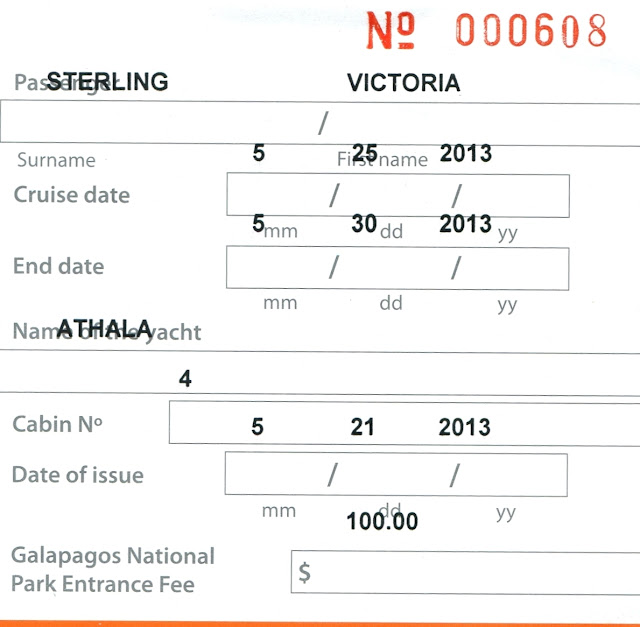 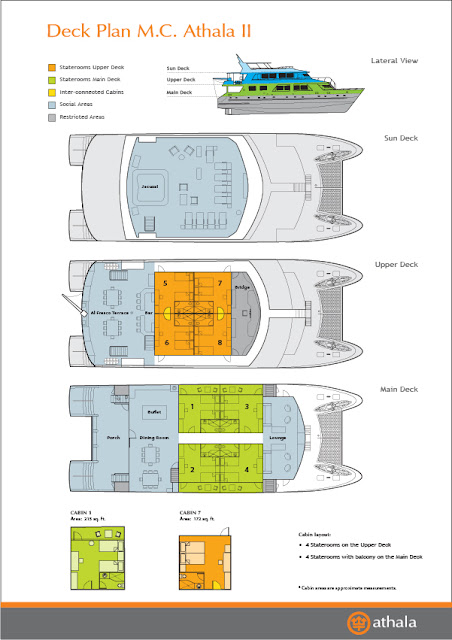 this is a map with the route we took around the islands over the next six days marked in yellow arrows- we start from the top right and head west then south then east and then back again to the Santa Cruz Island where we take land transport across the island to a ferry to a bus to the airport--- "Planes, Trains and Automobiles" anyone? 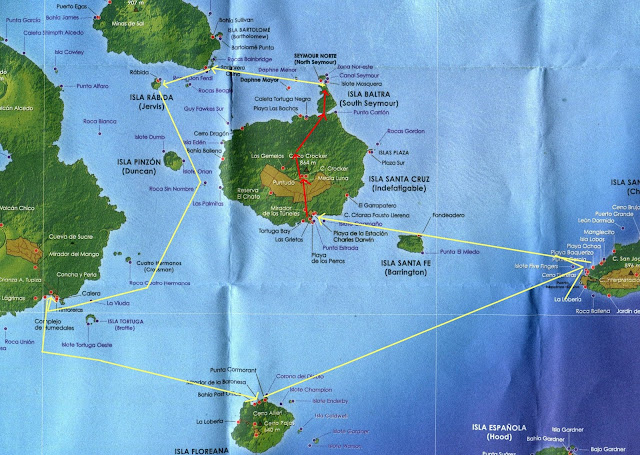 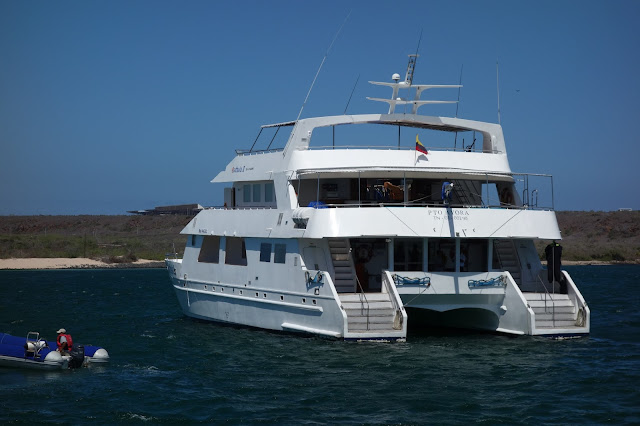 a very nicely appointed cabin - this is number 4 but all on our level looked the same. 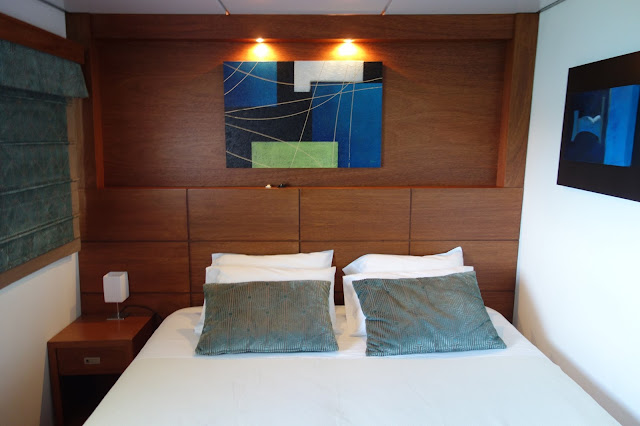 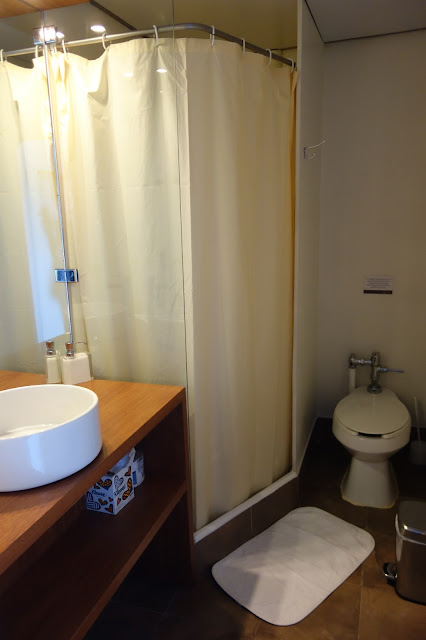 a little balcony that gave us outdoor seating without having to put on pants (LOL-  who would know given that the side of the ship covers up to your waist!) 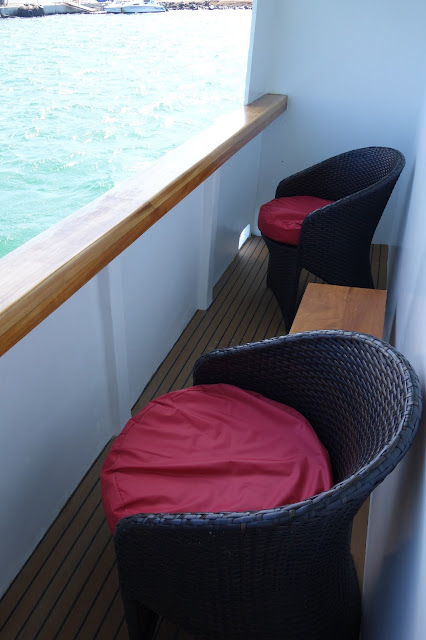 OK here is a shot of the kitchen (located in one of the pontoons) they carried everything up and down those steep steps (I would call it a ladder) since they had forgotten to install a dumb-waiter.... 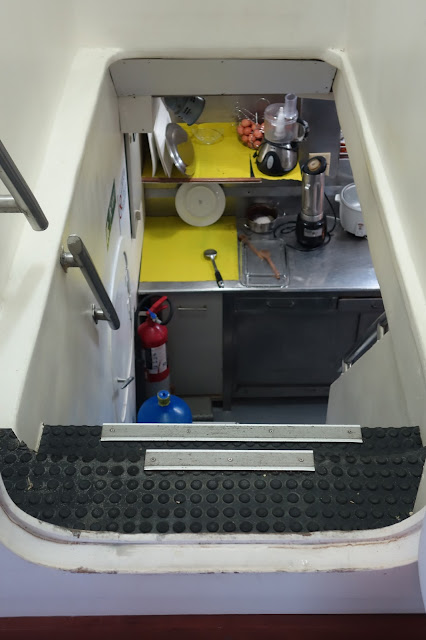 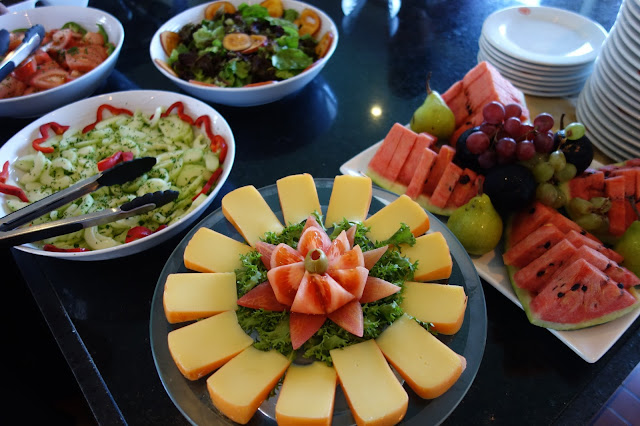 the bad news was that every single meal was buffet... (a personal pet peeve of mine as I DETEST buffets- petri dishes that they are...) - over the six days we were served soup or a starter at the table for dinner but after that everything was buffet.... I will not belabor the point but I will conclude that in our opinion the food was MUCH better on the Manatee despite the difference in both cost and level of ship/boat accommodations...enough said... 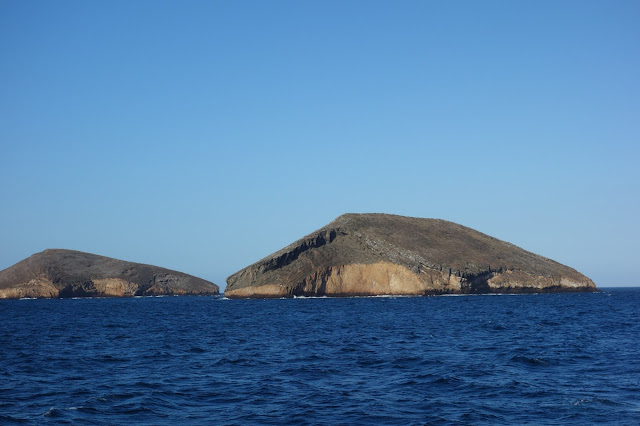 wet landings are when you take your inner tube style panga to the island but don't actually get there- the panga drops you off in the water and you hurl your body over the side and slosh to the shore where you are supposed to the towel off your "feet" and put on your hiking shoes or boots....

seriously? unfortunately yes- remember - oh no you can't, because I haven't told you this part yet- there is NO WHERE TO SIT DOWN...

so balance yourself on one leg, towel off one foot, and put on one shoe - without having that foot touch the sand again - LOL- then repeat the process for the other foot-  LOL - we quickly revise our footwear plans for the remainder of the trip... 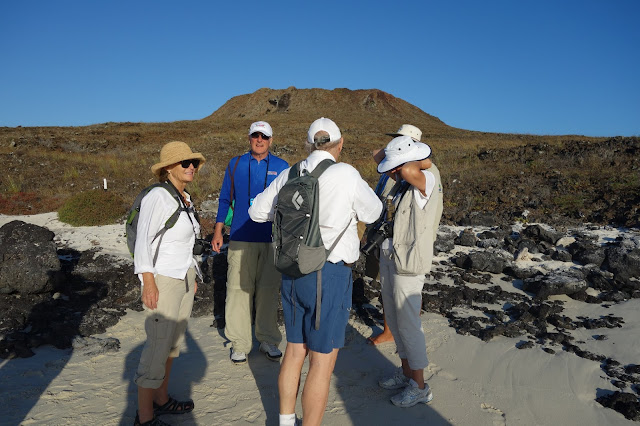 here a part of the group works on "re-combobulation"

the Chinese hat looking very much so- from the beach- 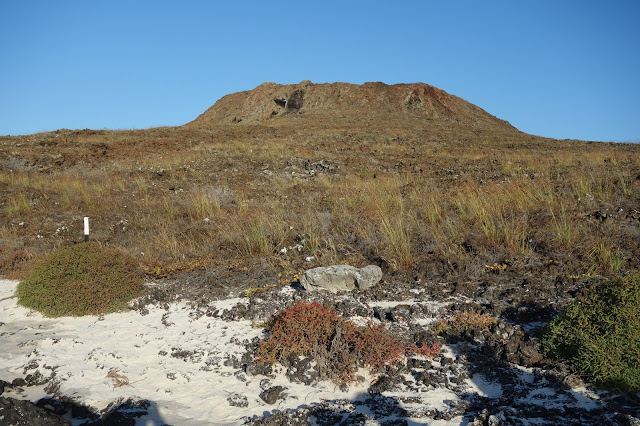 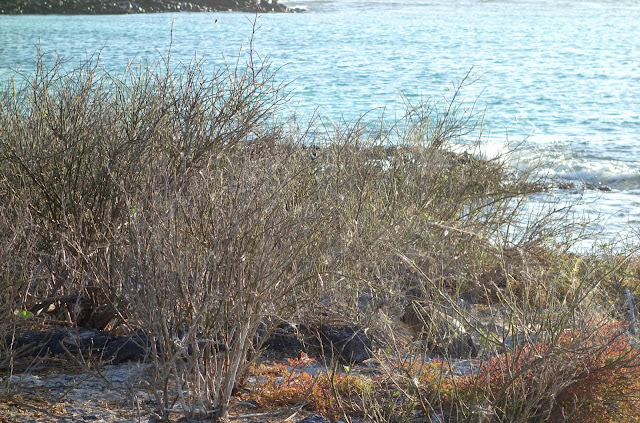 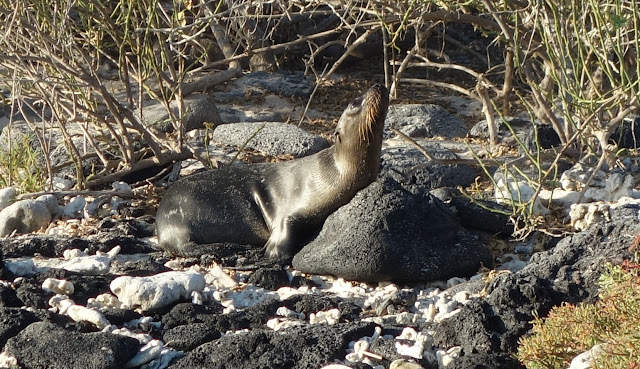 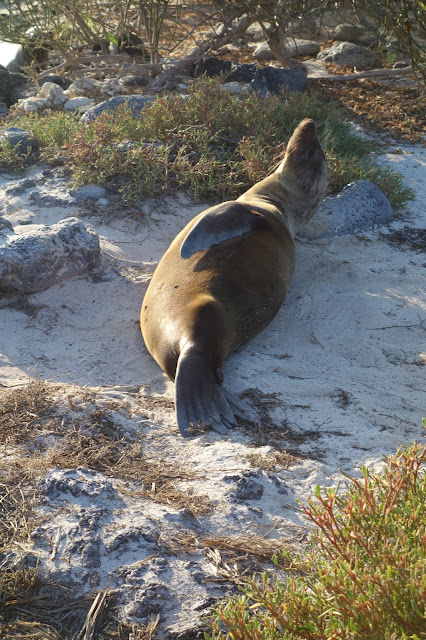 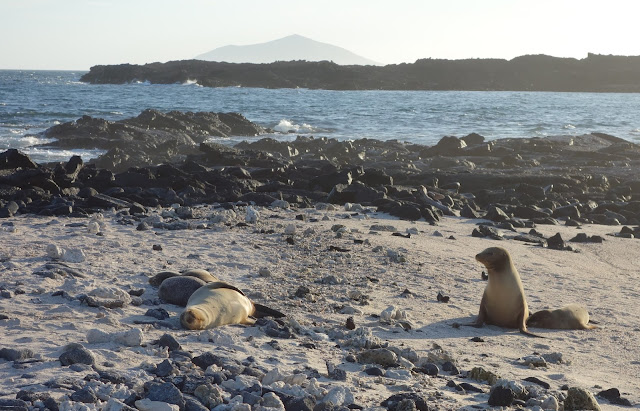 an adorable pup calling its mom who is away fishing-- 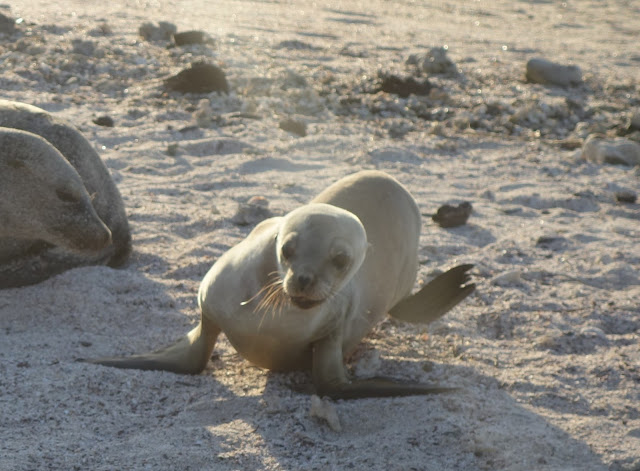 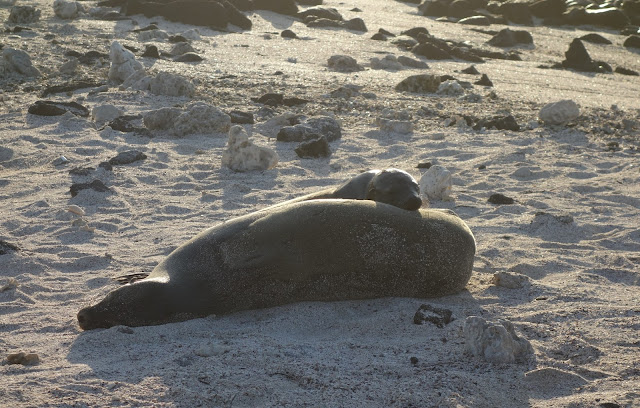 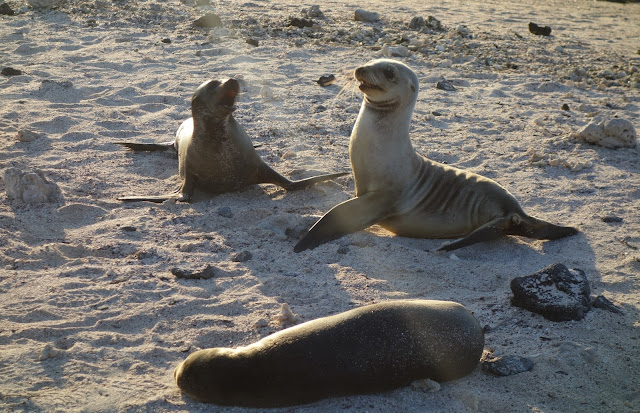 a nursing mother- the sea lions will only nurse their own babies which they recognize by call and smell... 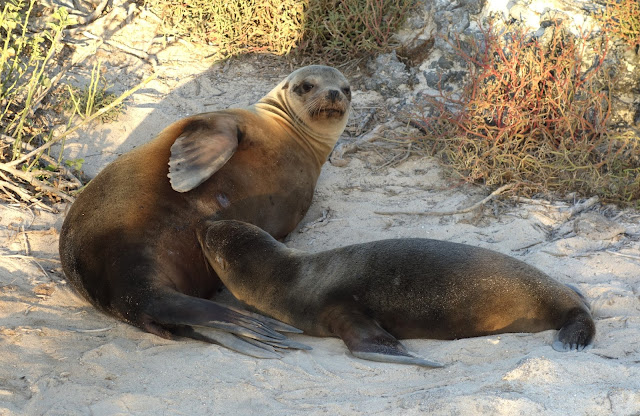 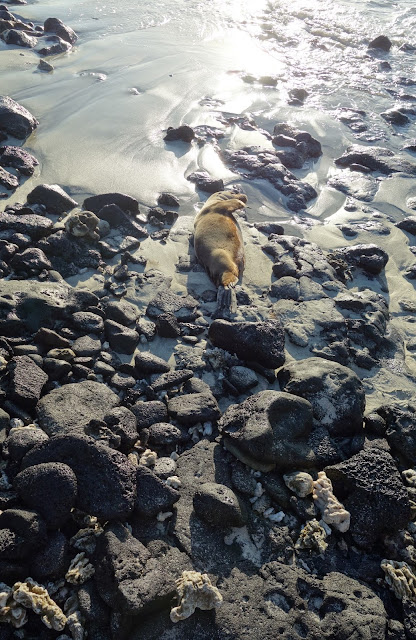 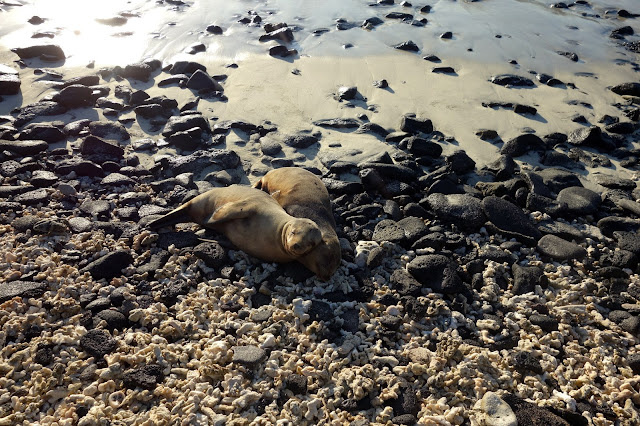 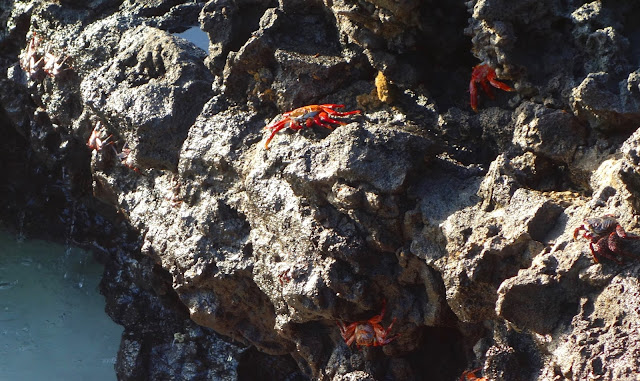 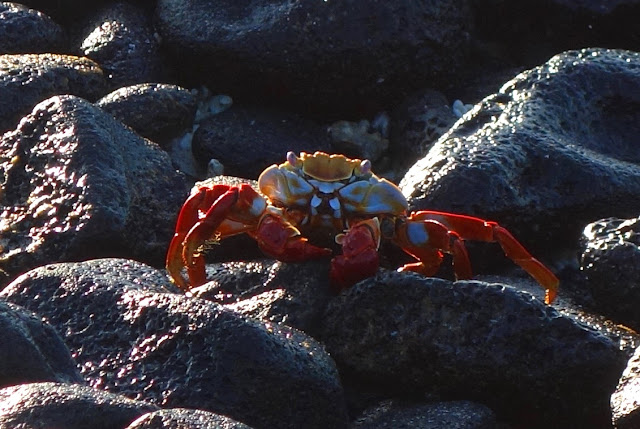 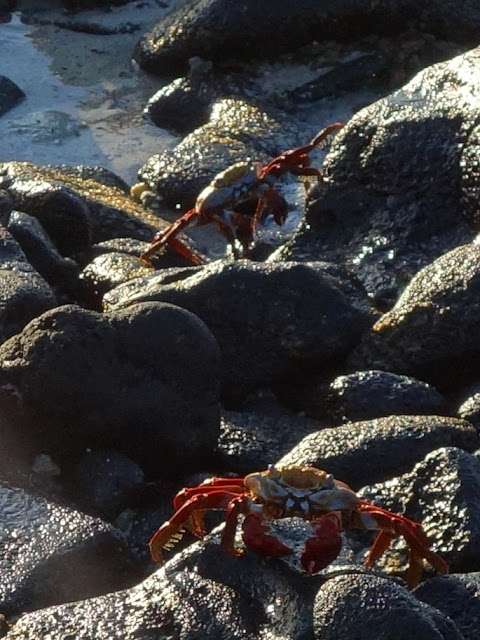 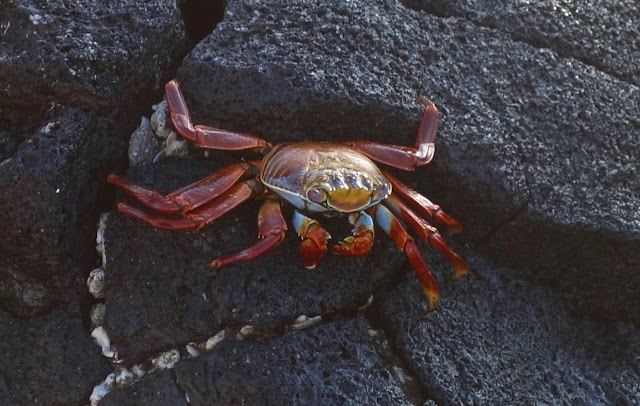 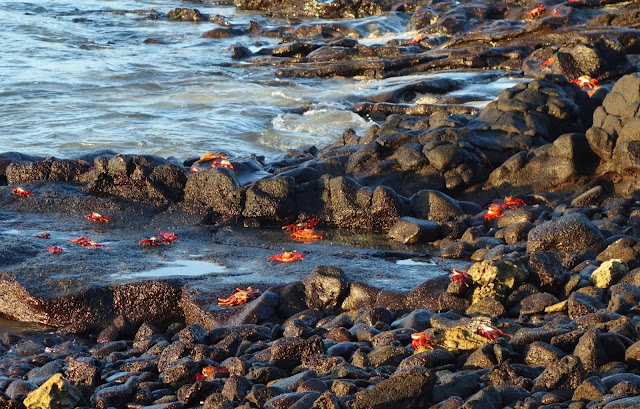 as you can see- there were plenty of crabs here- as it turned out this would be the most populous of the islands we visited in terms of sheer numbers of wildlife- as we left we spied a pelican and on the way back to the ship we saw the Galapagos penguins- which I will show in the next post.... 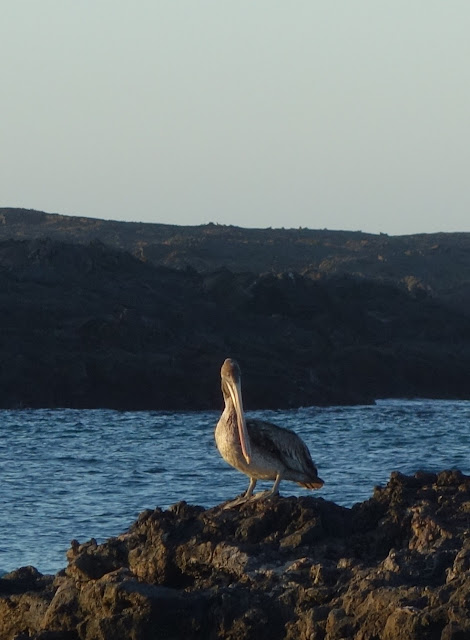