a restless night- awoke (as would be the pattern) with headache in the middle of the night and very dry- drink a lot of water and take aspirin and go back to bed- sometimes to sleep other times not--- this is the last I will say about it for myself.  Others were not so lucky and in the six days the fourteen of us are in Bolivia each day brought a different combo of who made it up and out each day.  Discussions of altitude medication versus not ensued... lots of opinions but in the end- everyone "limped" along and things did get a bit better each day - but what a whammy it was...

so on day two we headed around the city in a minibus which was much easier.  Pedro gave us the run down on lots of history for poor Bolivia which lost every war it has ever been in and each time lost major hunks of its territory (to Chile, Brazil, Argentina, Peru, Paraguay- have I missed anyone? maybe Ecuador) Our first off the bus stop is the viewing point overlooking the city and the Illimani peak.  Stunning views hampered slightly by seasonal smog.

La Paz is a giant bowl shaped city with the airport located on a high plane at the top of the city where it is 14K ft - here in the city we are at the lesser altitude of 13K something- LOL... the city is very distinct looking- aside from the bowl shape - it is made up of homes of reddish brick- so the overall sense is of a terra cota colored place.

from the view point we continued the city tour driving through neighborhoods that Pedro described as he also gave us a run down on salaries and professions and who does what - and then included some political background on the current mayor again and even more on Evil Morals (the nickname of president Evo Morales) - we make a stop at the Gold Museum where they have a lovely small collection of gold and silver artifacts (no photos in the vault please!)

from there we take a drive out of the city to the Valley of the Moon (unusual rock formations) where we walk around and then head to lunch nearby at an outdoor place where we are served a very nice soup then a buffet lunch and strawberry mousse for dessert. we head back into the city arriving mid afternoon and continue our tour with the witches market and the cathedral area, then the "remainder" of the day is free and dinner on our own tonight. 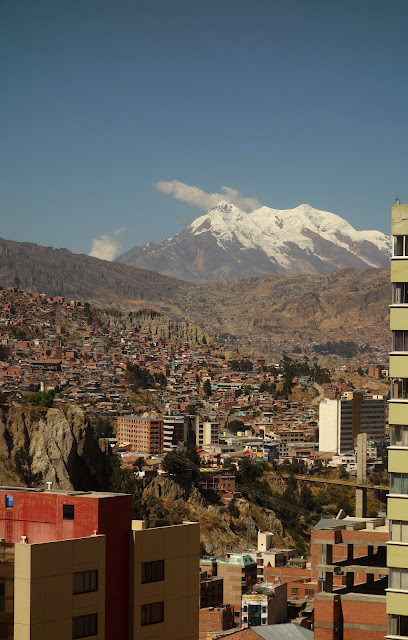 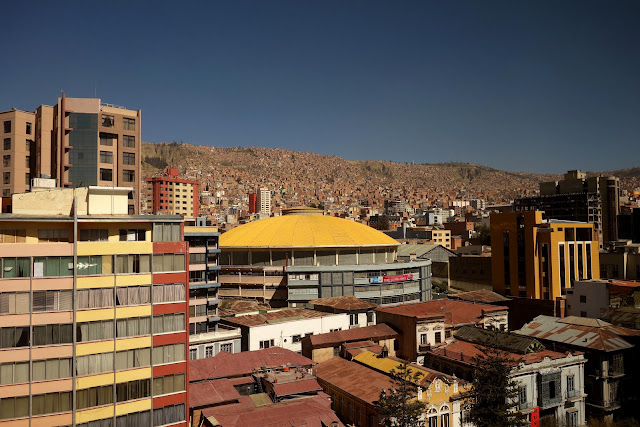 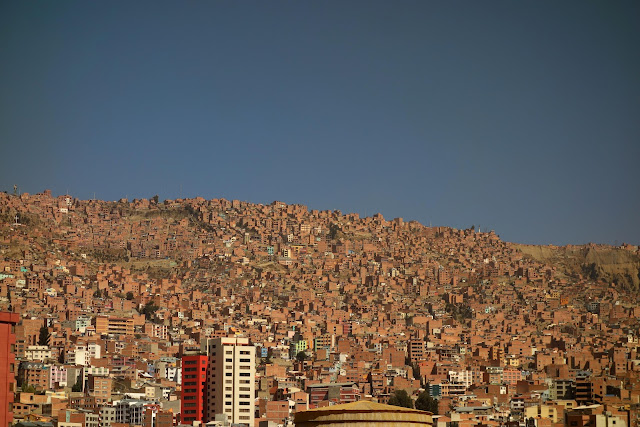 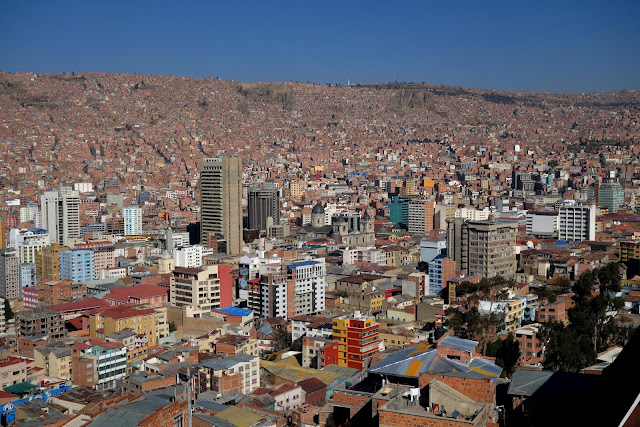 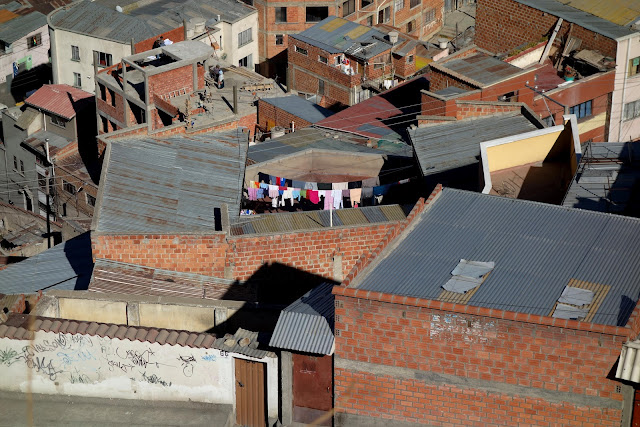 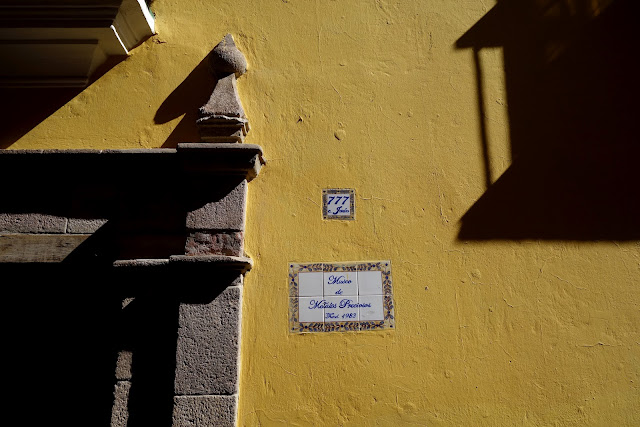 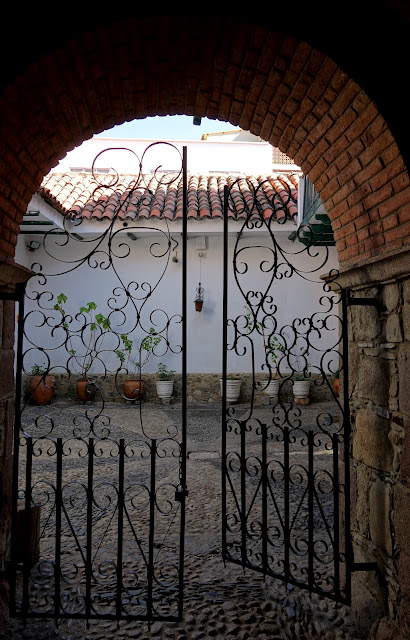 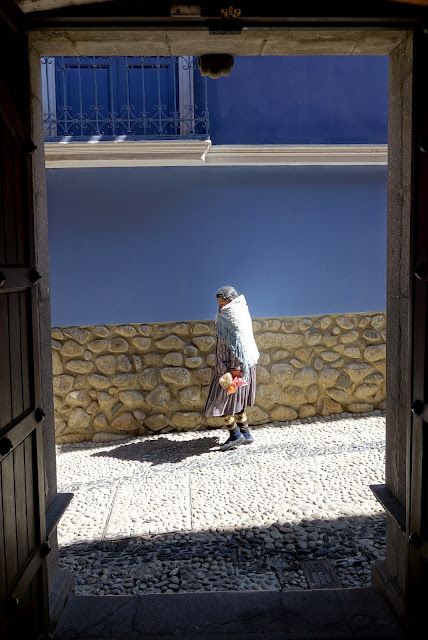 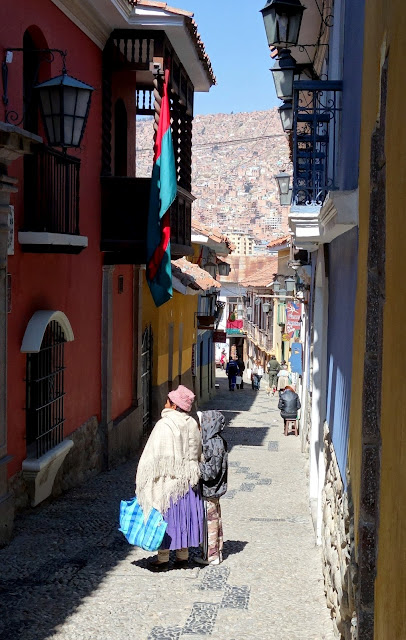 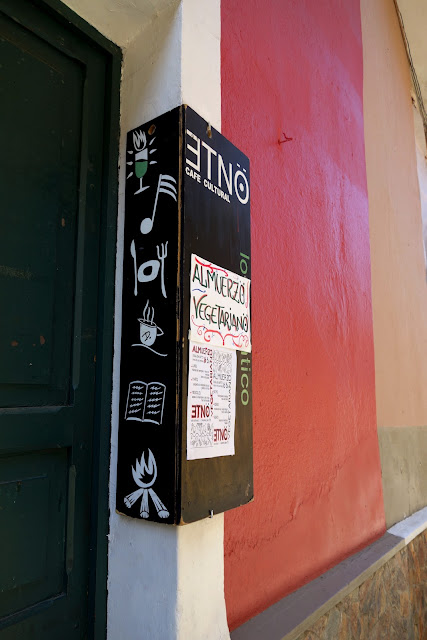 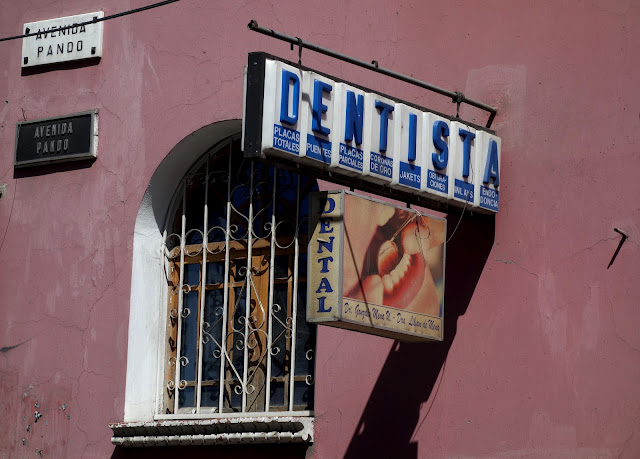 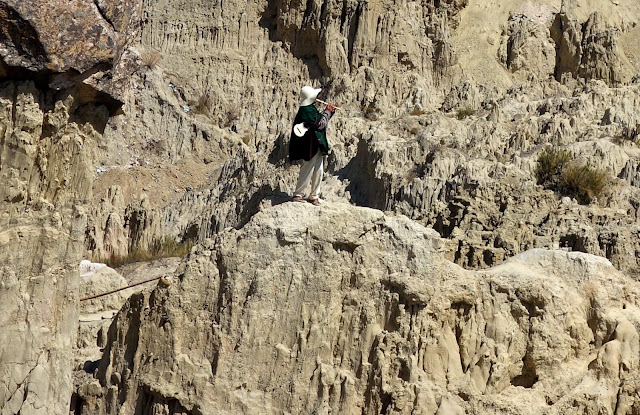 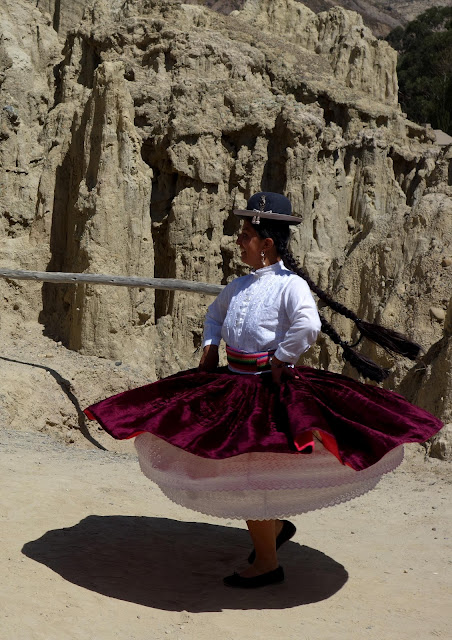 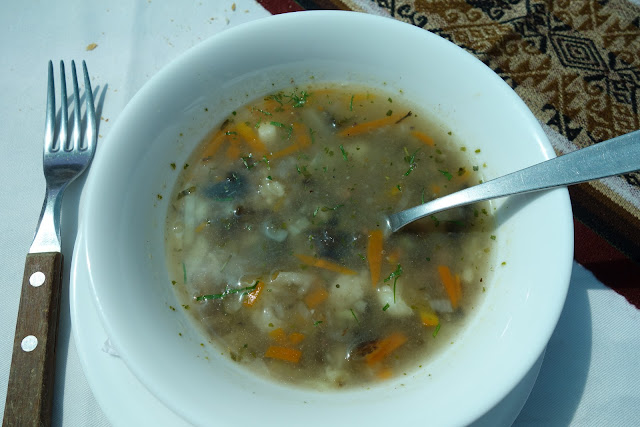 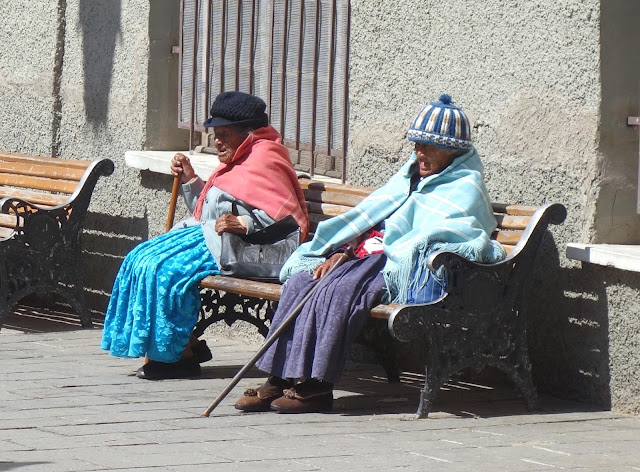 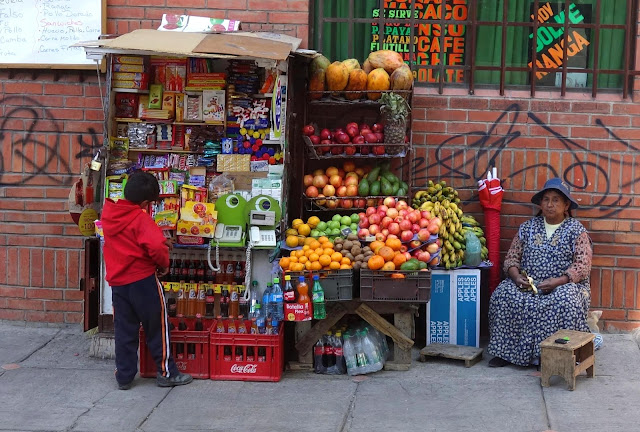 below- things from the witches market where you can buy stuff for spells and pretty much no spell was worth anything unless it has a llama fetus included... 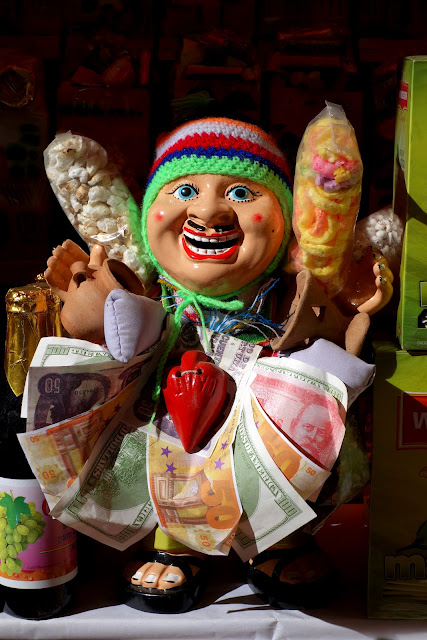 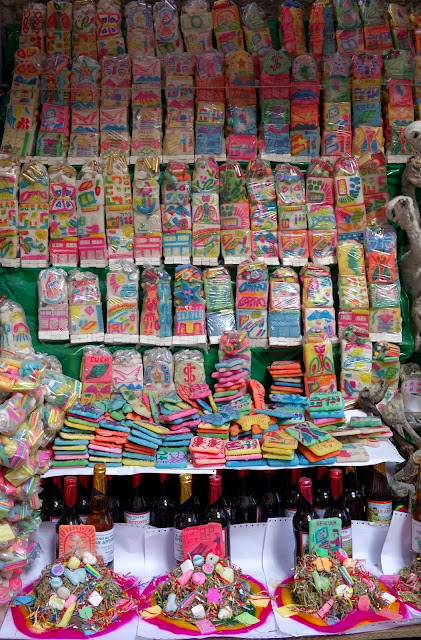 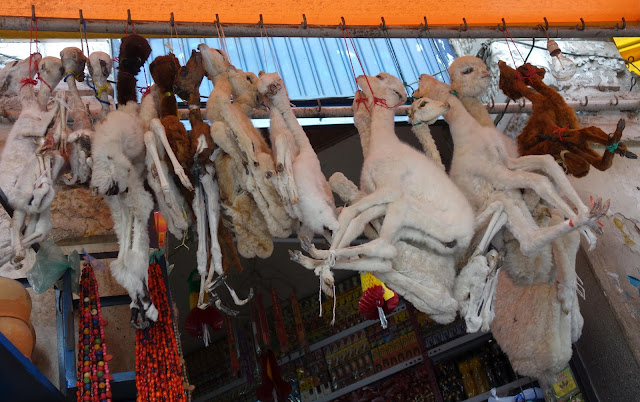 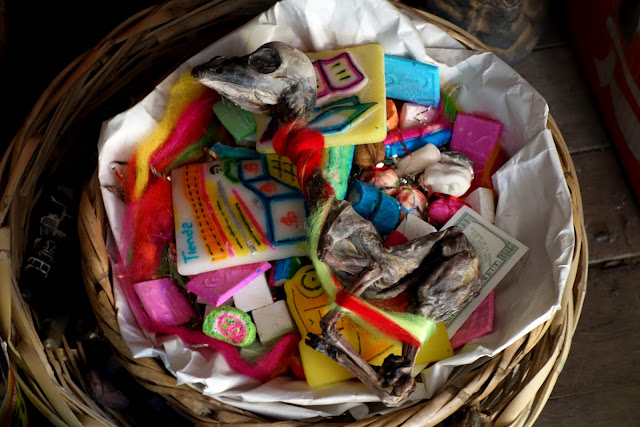 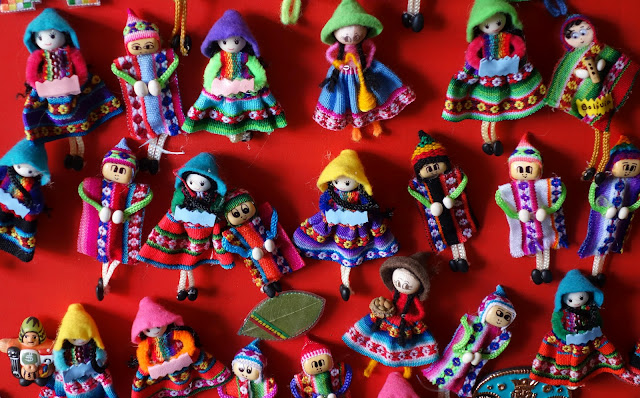 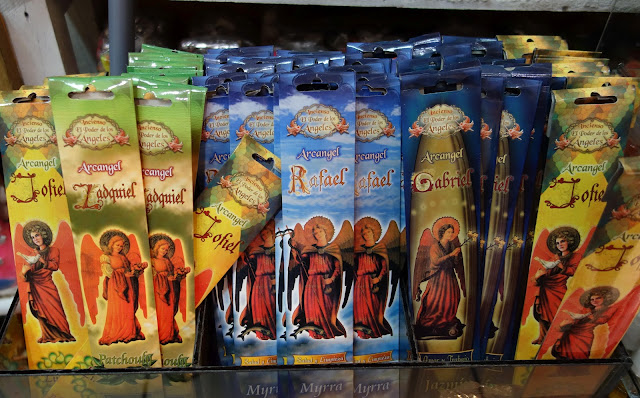 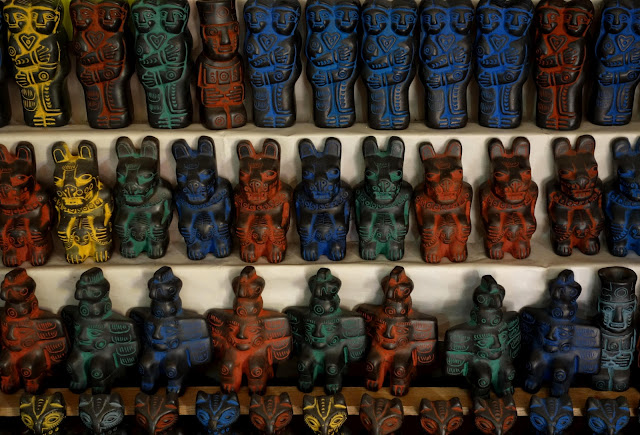 the witches market area alos has general tourist souvenirs as well as local handicrafts- in case you might not have a need for llama fetus charms and spells... 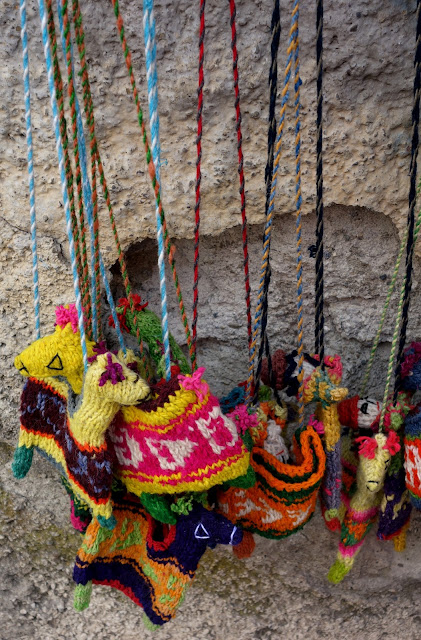 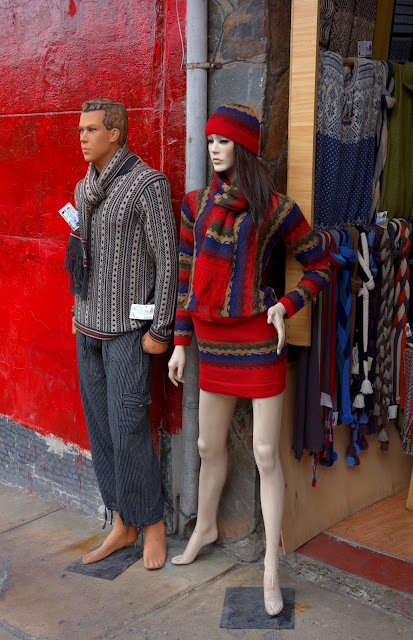 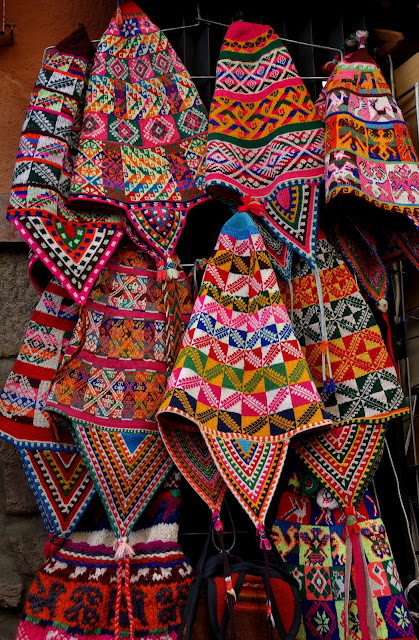 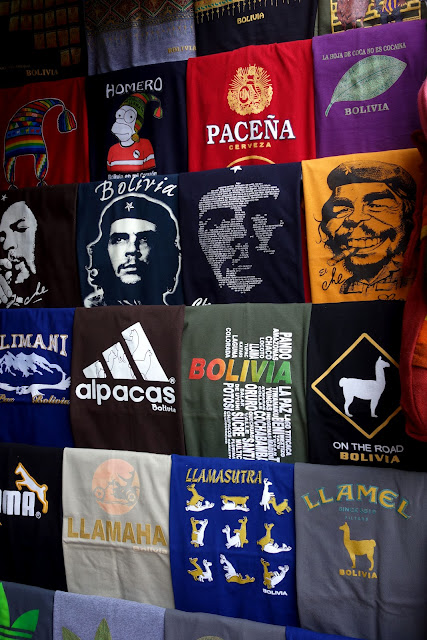 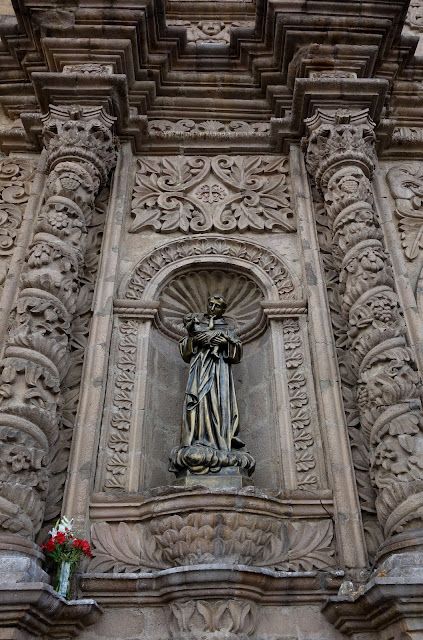 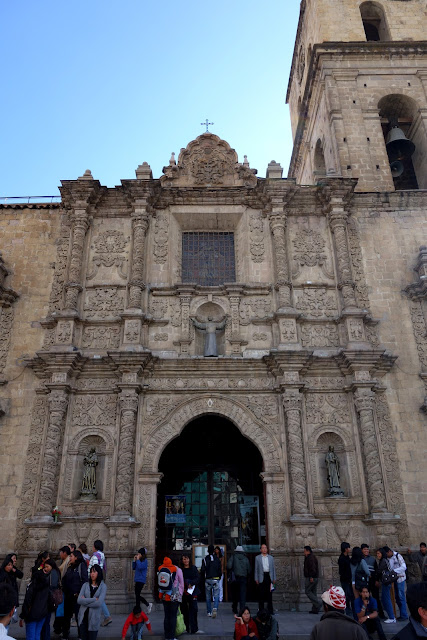 and so day two ended in the late afternoon- at the bus/van stop right next to the cathedral where we waited for our bus to take us about ten blocks down the hill to our hotel- LOL.... and we were happy to sit and wait rather than walk anymore- LOL

here is the write up from the itinerary - we pretty much covered it all - just in a bit different order and the Gold Museum was a nice add-on:
This morning, we get another perspective on La Paz during a panoramic tour, including a stop at Killi Killi—a mirador, or scenic viewpoint, at the northern outskirts of La Paz that offers incredible city and mountain vistas. From here, we can appreciate the unique topography of La Paz—a mountain-ringed city shaped somewhat like a bowl, with brick buildings and workshops perched on the rim and a dense city center bustling below—as well as the rugged landscape of the Altiplano.
Afterward, we’ll continue our drive around La Paz, getting to see more of the city’s activity and architecture. Then, we’ll visit some of the local mercados (markets), which are wonderful places to meet the people of La Paz—from well-dressed professionals to itinerant street vendors and Andean women in their traditional garments of brightly colored multi-layered skirts and bowler hats. We’ll also visit the Witches’ Market, where indigenous people sell plants, potions, and talismans used in ancient Aymara curandero (healing) rituals, and yatiri (witch doctors) offer their fortune-telling services. Following our lunch at a local restaurant, we’ll head south of the city to discover the Valley of the Moon. This rugged and fantastical landscape features deep gullies, oddly shaped outcroppings, and spindly stone spires, all formed by centuries of erosion. We’ll take a short hike through the valley, returning to La Paz in the late afternoon.