we arrived late on the 4th of July- and were met by Greg Couzens - our guide for the next three days of touring in the Cape and Winelands region.

the hotel is very basic- but will do.  we have an excellent  breakfast in the morning and head out early to try to make the Table Mountain cable car- it's closed so off we go in another direction- up signal hill. good views over the city and harbor- 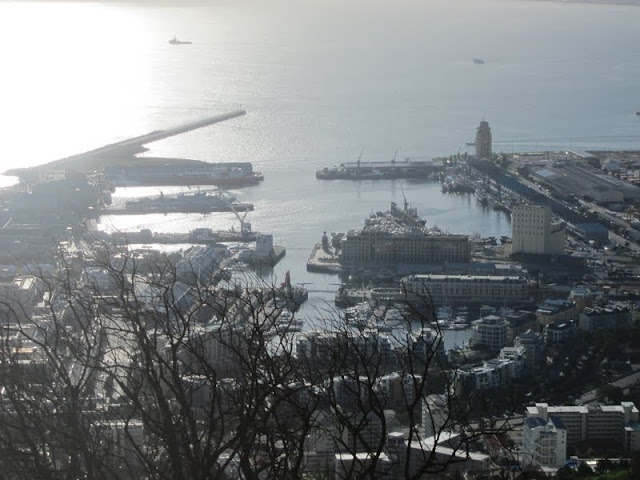 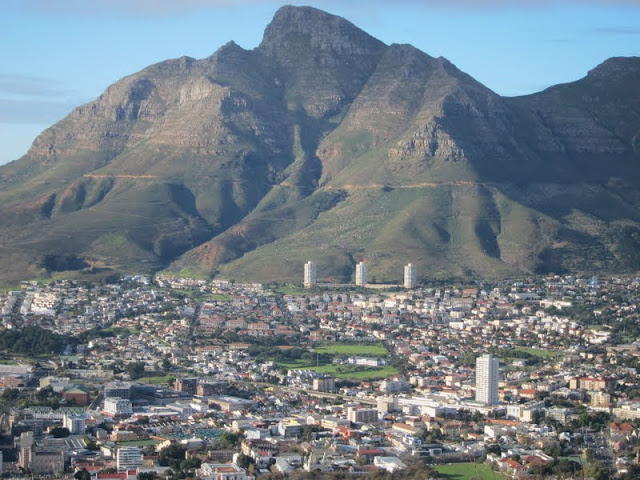 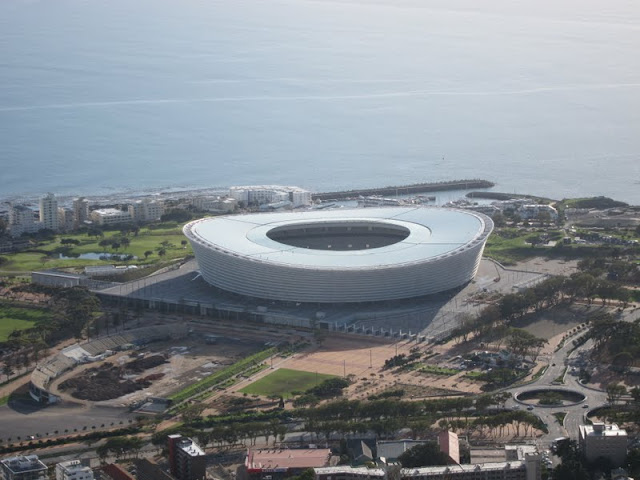 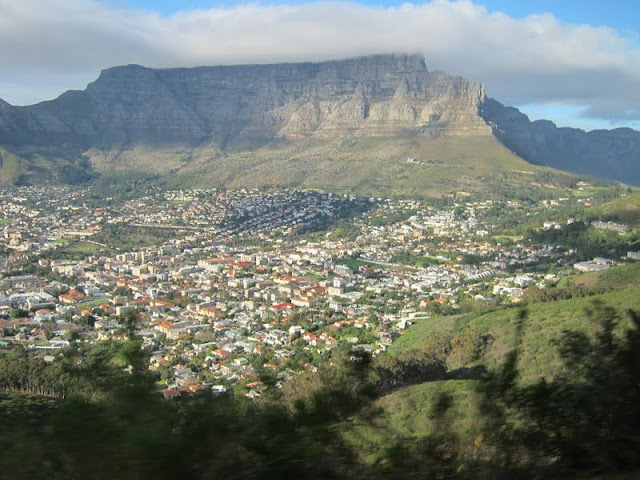 then off to various areas of the city and then to Kirstenbosch gardens - world renown habitat for protea and fynbos vegetation. 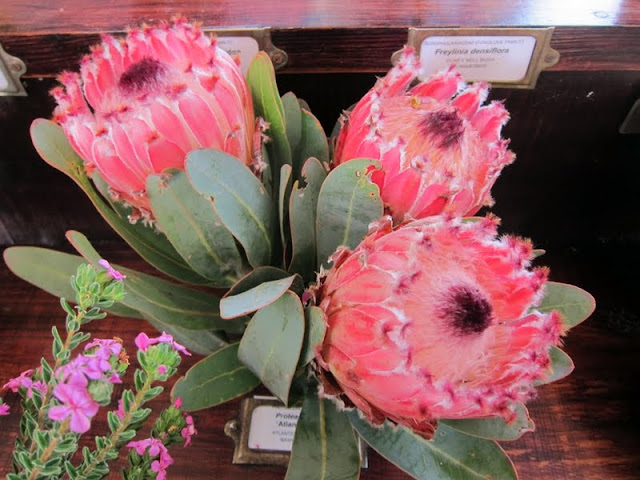 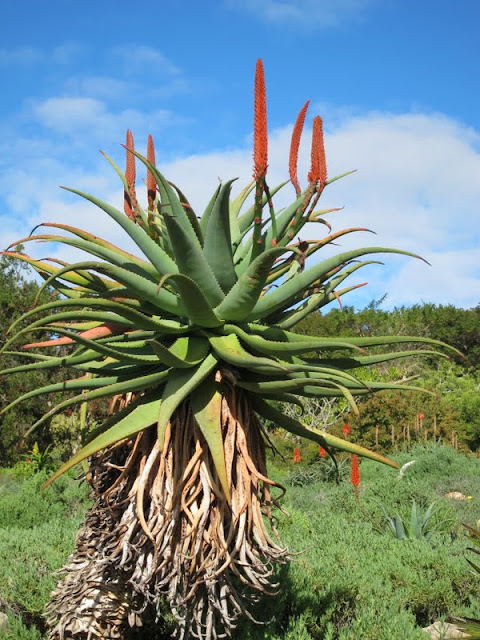 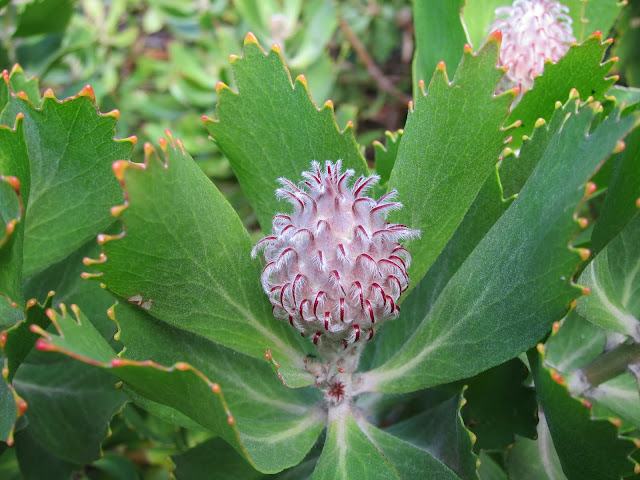 from there we try again for the mountain and it is still closed- no worries- we still have two more days.
after we do a drive through the V&A Waterfront Greg drops us off in the middle of the working harbor at one of his personal favorites Panama Jack's 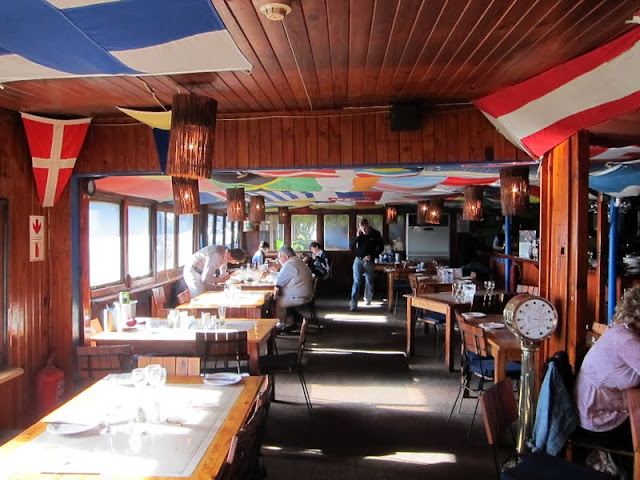 we cab it home to the hotel and the rest of the folks go to the Waterfront to shop.  Later we are picked up to have a home hosted meal - at Angie and Peter's house- lovely lovely evening.  their daughter is gradating from law school and their son works as a Cisco systems guy in IT at the University of Cape Town.  Peter is a former pro soccer player and Angie is in accounting.  Below Angie's mom Agnes, Peter and Angie. 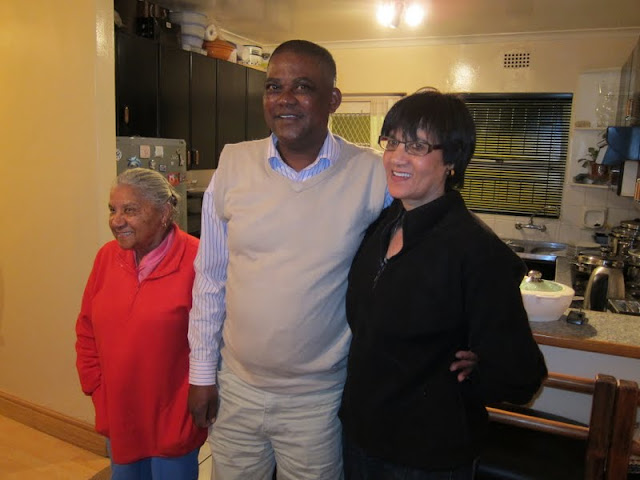 the next morning after another excellent breakfast we are again off early- still no go on the mountain.  So we stop at Bo Kaap on the way out of town for some photos (I had asked Greg if we could do a stop and he was very accommodating) 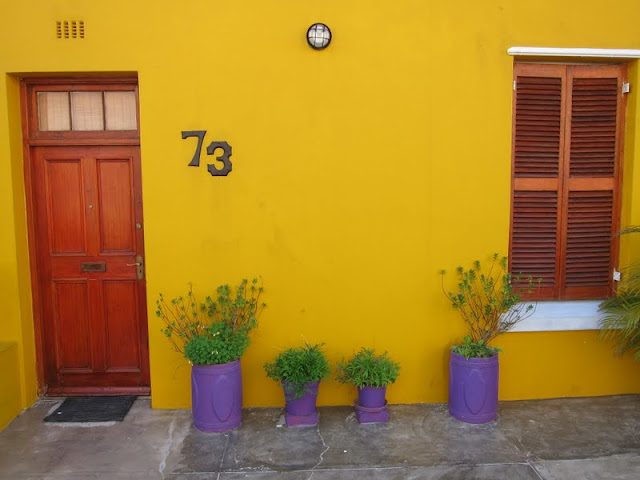 then off to the cape point- via all the high end areas along the west coast of the cape peninsula and down through Chapman's Peak and into the Cape Nature Preserve where we see (and get photographed at) the southwestern point of Africa. 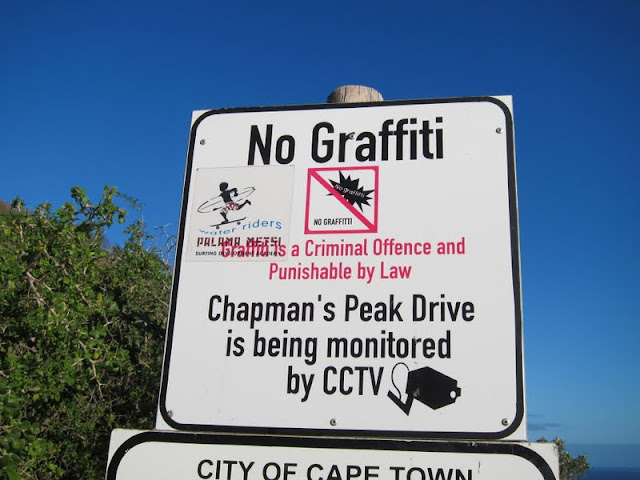 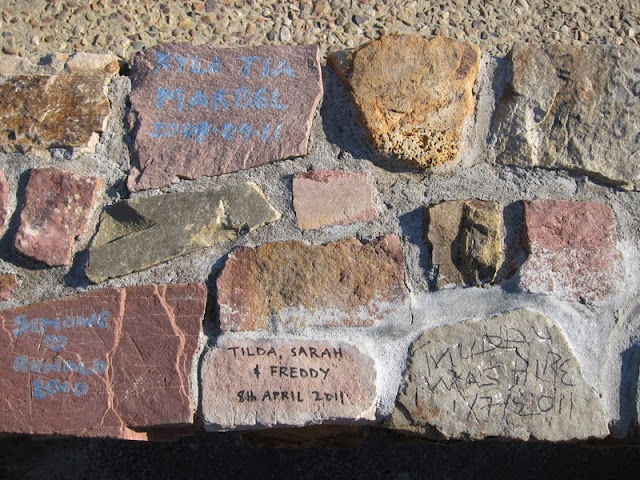 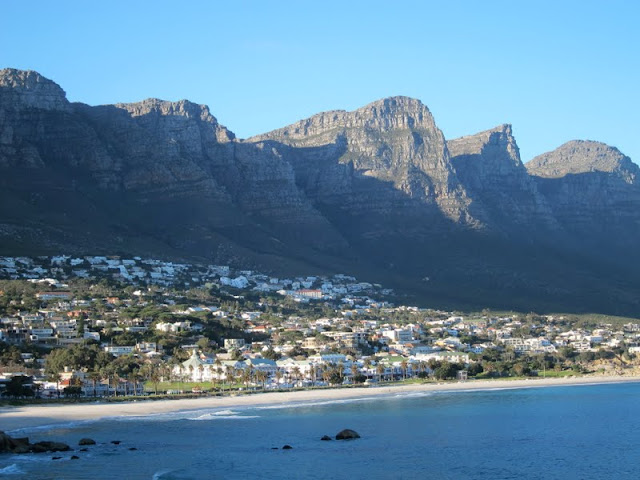 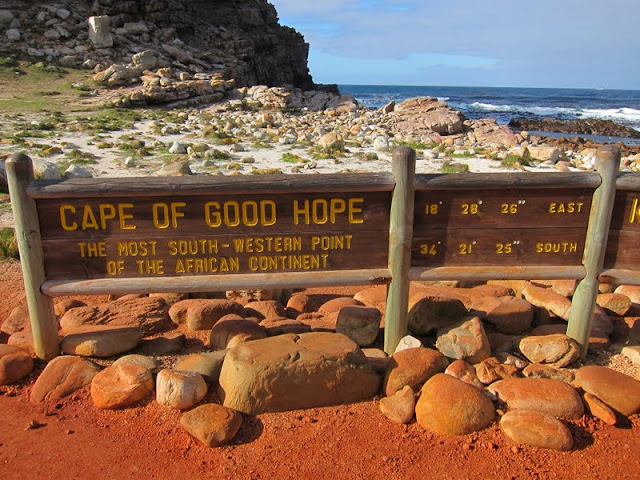 then on to the eastern side of the peninsula and a lovely lunch at the Black Marlin before getting to Boulder's beach and the penguins and traveling through Simon's Town back up to Cape Town. 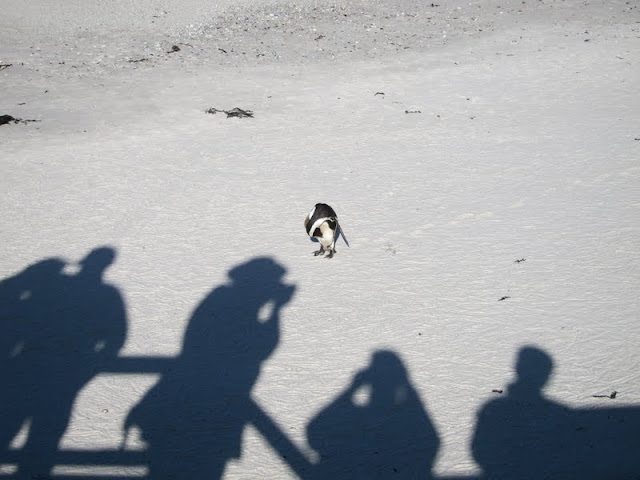 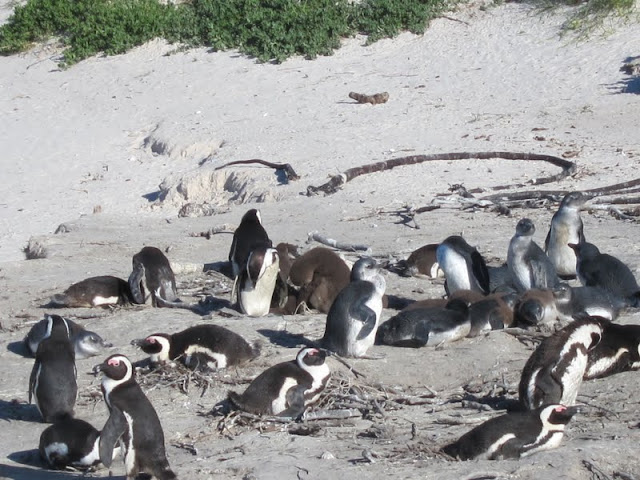 We do finally make the mountain and spend our last hour of the day up there. we finally spot one of the dassies (rock hyrax) while up top. 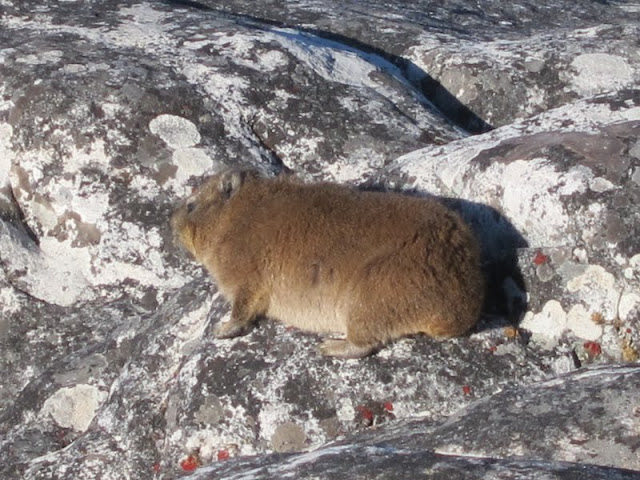 We have dinner at Savoy Cabbage again where the food and service remain stellar. 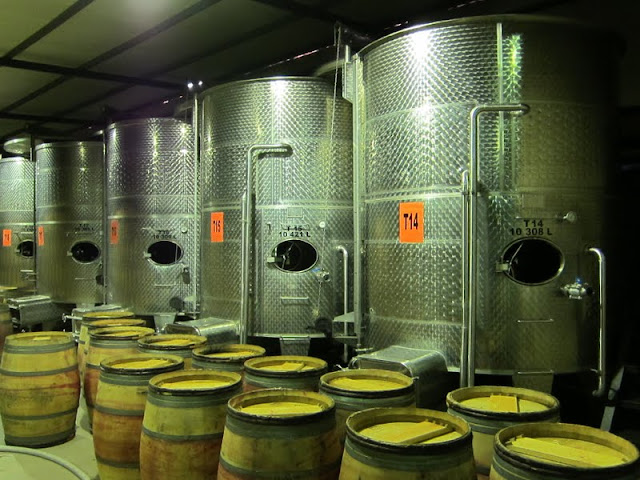 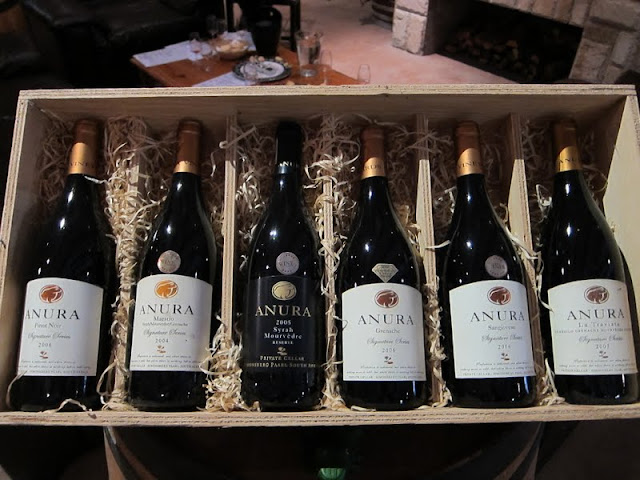 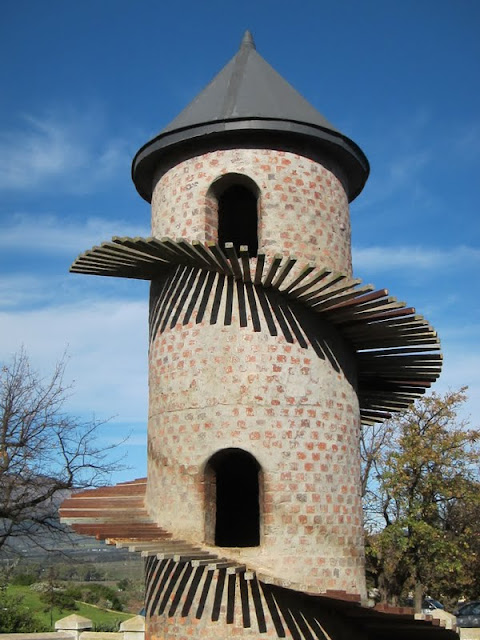 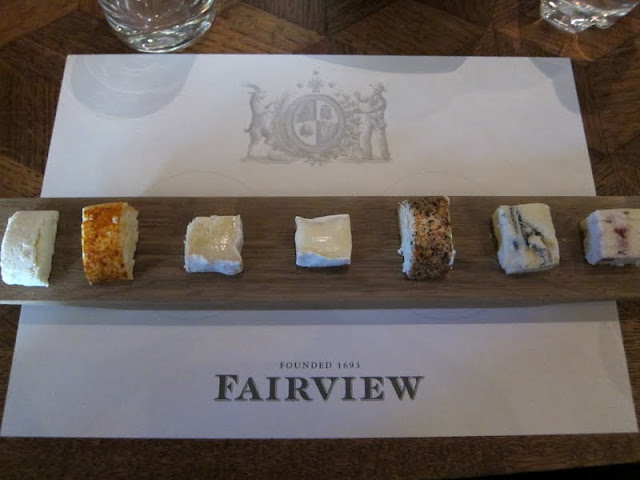 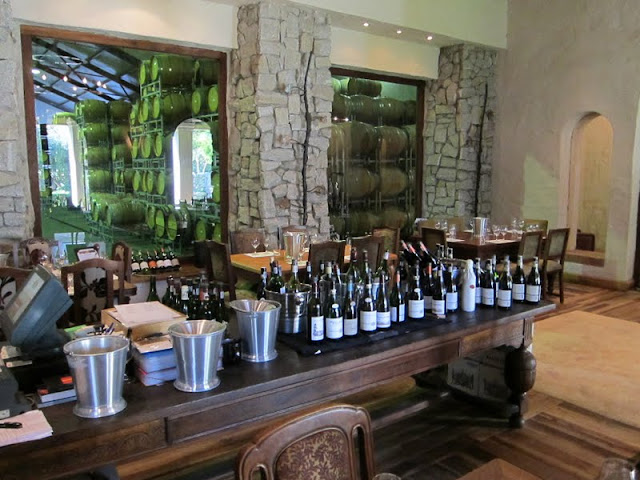 and then stop in Franschoek for lunch 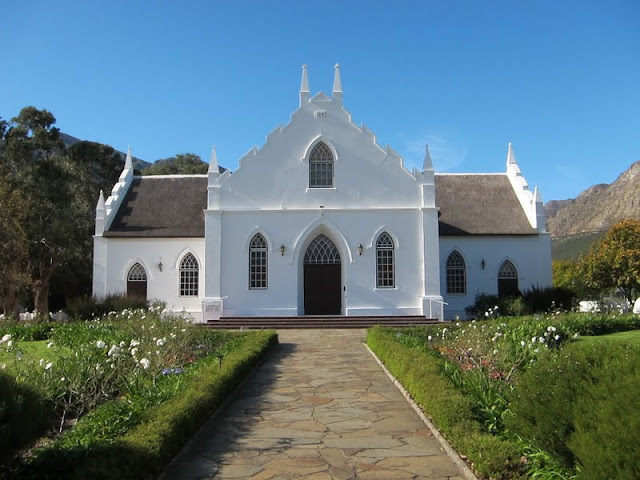 and then on to another winery after a stop at the Nelson Mandela Long Walk to Freedom statue located at the prison where he was serving when he won his release. perhaps later I will get to write more about Mandela but one quick note- while in Zimbabwe we heard a lecture about David Livingstone and his impact on the opening up of Africa.  The lecturer called Mandela the "living god on earth."  His story is awe inspiring- his place in history for his own country and for the world at large as an example of the overwhelming power of forgiveness and forward movement on behalf of all humans is one that should be revered.  when we were in Africa Michelle Obama and her daughters visited just a few days behind us and they were able to meet with Mandela (who is in failing health - now approaching 93 I believe) what a special moment that must have been for her and I hope her girls have a small understanding of how much Mr. Mandela has meant to all people but especially to people of color. 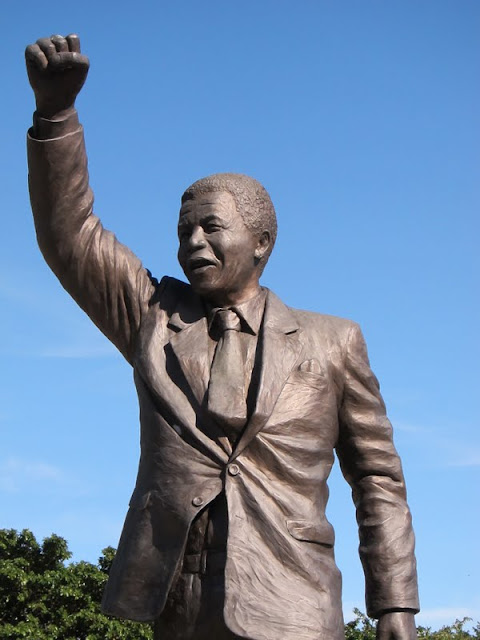 and we are heading back into town- we drive through a couple of shanty towns which they now call "informal settlements" and learn more about township life. 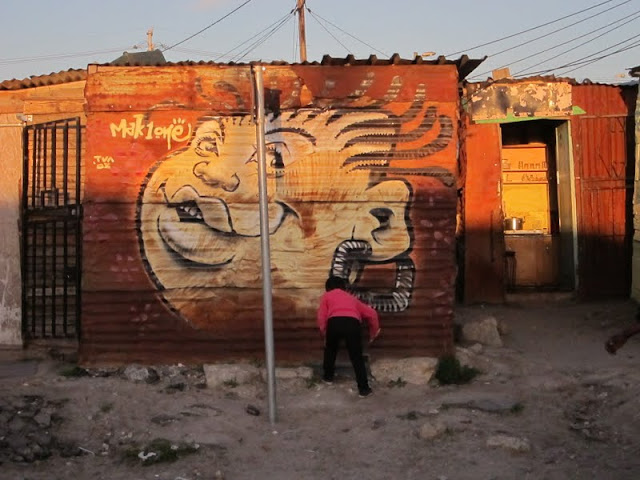 then finally back to the hotel.  Dinner was at the Waterfront at Quay 4 upstairs- lovely but we are both tired and happily end the meal without dessert to exchange for a good night's sleep

our final day was spent completely at leisure- our flight takes off just before midnight and so we sleep in and head to breakfast late- then after some computer time and printing of boarding passes we head to the Mount Nelson hotel for high tea.  it is a lavish affair and we are stuffed with tea sandwiches and cakes 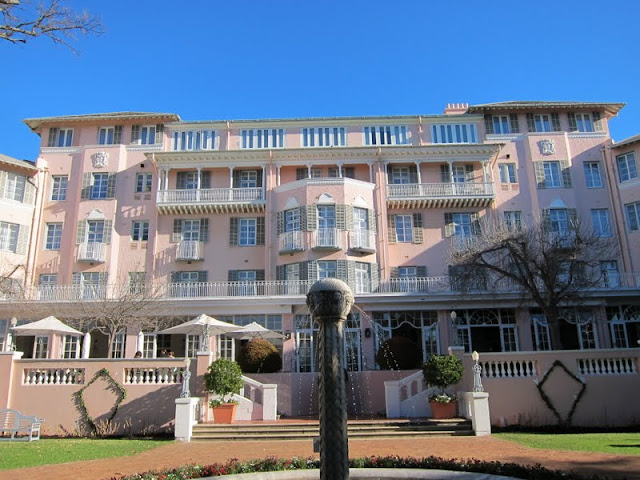 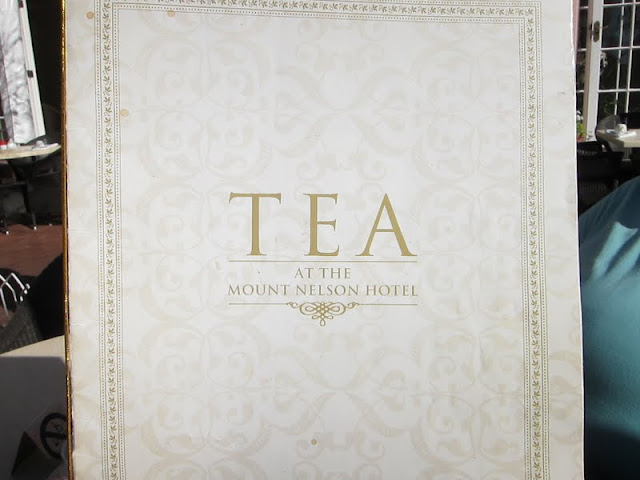 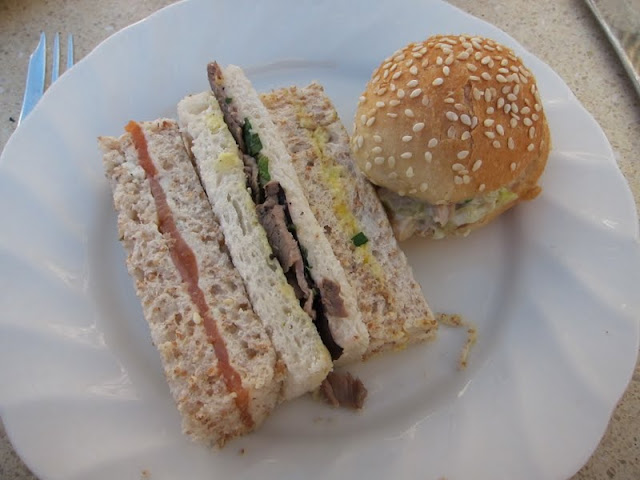 so we walk all the way home - across the city and end up back at the hotel about 45 minutes later ready to shower and pack for the long journey home- our driver arrives at 9PM.

lots more to tell about from the 28 days we were away - so stayed tuned as I go through photos and remember tales of what we saw and did.
Posted by TOR at 10:17 AM