well actually - we were in Copenhagen- not black rock but our Saturday turned to some pretty bad travel karma as we left the hotel to go to Poul and Lene's house for dinner.

we took the Metro to Norreport (the north train station) to get a train to Espergaerde.  as we waited on the train track they started making announcements about our train but the PA system was so bad we couldn't understand the English or Danish.  finally the TV monitor said the train was canceled.  there was another one in 20 minutes so we called Poul and told him- no train at the agreed time and the time of the next one.

then the PA came on again as the next train time was getting closer and made the same announcements and that train was canceled.  so Poul told us which bus would get us closest to his house and we went upstairs to find it.  the bus was jammed with people and the driver - understanding that the trains were canceled let people on event to stand where the door would open and close just so as many people could get on as humanly possible - some poor girl in the middle kept yelling at him about it was too dangerous to let anymore people on (claustrophobic I think) but at each stop along the hour bus ride we had this pattern two people would get off and three would try to get on... after about a half hour we were able to get seats as some left the seats and we were close enough to snag them.  we finally arrived at the end of the line bus stop and found Poul waiting.

unfortunately with news that the three of us were on our own for dinner as Lene's (who has a small family) uncle was dying that evening in hospice and she wanted to be there for her cousin as that was all the family they each had.  we completely understood and told Poul that we were sure his (actually Lene's) cooking would be fine... she left specific instructions and the meal was superb.

just as we were having dessert Lene arrived home, having driven more than an hour each way to be with her cousin and her now deceased uncle.  we had a chance to visit with her a bit  before the midnight train back to Copenhagen (there wasn't another until 2 AM).  She dropped us off at the station and made sure we were on the train - we got a transfer on the Metro on the way back and got to the hotel around 1:30...

the meal Lene prepared was magnificent- the traditional Danish flaeskesteg and new potatoes - with a gravy that was so rich and creamy we could have eaten it straight as a treat!

Here is the wikipedia entry on the food-

Flæskesteg is considered to be one of Denmark's principal national dishes. Always prepared with crackling, it is also a favourite for the Danish Christmas dinner served as the evening meal on 24 December.  The traditional method of preparation is to roast a joint of pork from the breast or neck without removing the rind. So as to obtain crispy crackling, a sharp knife should be used to cut the skin through to the meat in narrow strips. The skin is rubbed with salt, pepper is added, while bay leaves and optionally cloves are inserted into the cuts. The joint is then roasted in a hot oven.

The dish is accompanied by both boiled potatoes and caramelized potatoes (brunede kartofler). These are specially prepared by melting sugar in a frying pan over strong heat, adding a clump of butter, and allowing a portion of small round peeled potatoes (available in cans) to bathe in the mixture until they become richly browned or caramelized. Red cabbage (rødkål), which can be bought in a jar or a can, is always included too. Many Danes consider the traditional recipe to be the one described by Frk. Jensen in her 1901 cook book.

so while I did not take photos when we were eating- I found one that pretty much looked identical to Lene's roast - on the Internet. 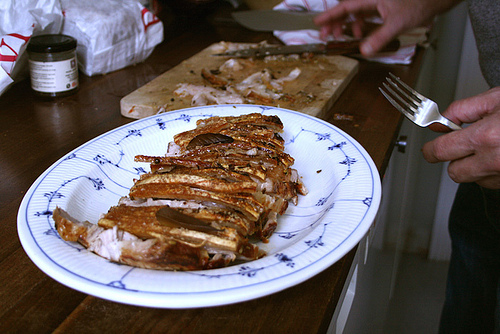 so when we got back to the scary train station (ill lit to the extreme and very very dirty- I have never been in anything quite so awful - even in India) I took a photo- and I want you to know I pushed the brighten button on the photo software to about 85% in order for you to see what I saw- the light was so bad and the place was so dirty I would be careful to avoid this place - especially if you are unaccompanied. 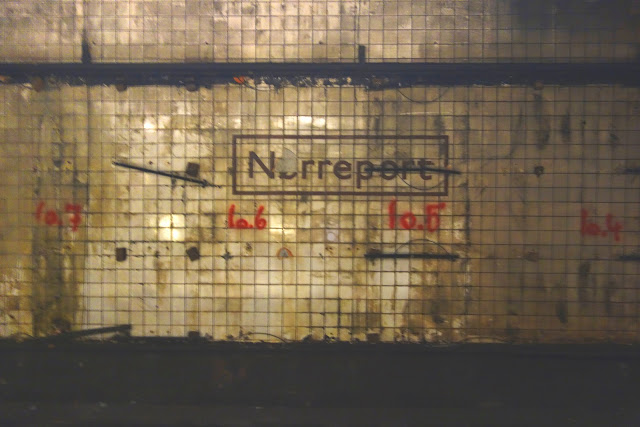 so Sunday morning our friend Aase was scheduled to arrive in CPH to spend a few days with us.  YEA!  Phil has been friends with Aase for decades now and I am lucky to now be able to call her a friend as well.  she is so smart and funny and we really are thrilled she was willing to play tourist in CPH with us.   she is recently retired as well. so we all have 2012 retirement milestones to celebrate together....
Posted by TOR at 2:11 PM