the recitation of the Nordic Capitals adventure - we returned eight days ago and I have been neglecting my photos - so yesterday I started on the first leg of the three capitals journey- Copenhagen.

we had a kind of strange travel thing go on this year- for reasons I won't go into (not secret just boring) we switched our planned trip to Greece from October to May.  We had been planning a Europe trip in May with friends but they ended up on another journey (another long involved story) so in mid summer - actually - almost late summer we were still debating where to go in October in Europe.

despite managing more than 27 weeks away from home in 2012 - not every trip is clear far in advance... in our discussions over time Phil had repeatedly said how much he wanted to see his friends in Denmark (friend Aase was finally retiring and we hadn't seen her in a several years and it had been eight plus years since he had seen Poul who almost never visits the US despite globe trotting to Egypt several times a month apparently)

so after listening to his whining (or whinging as the Brits say) long enough I said- OK then - let's do the October trip to Denmark and we can add on Helsinki and Stockholm and call it the "nordic capitals" trip.  (for those concerned about Norway- we spent a good deal of time there on an earlier trip and decided this would not be the time to return quite yet)

over the years Phil had gotten friendly with Poul's nephew Martin and so we also hoped to get to see him and his family while there.  Martin and Susan's plans for a holiday created a date by which we needed to arrive in order to see them so that is where we started off the planning.

we left late on the 3rd flying SAS to CPH and arrived midday on the 4th- took the metro from the airport to the Kongs Nytor stop and walked a the two blocks to our hotel - the Hotel Opera (a bit care worn but great location and decent breakfasts) - we checked in a little after 2 PM.

here is the klipkort we used to get around on the Metro and later the train (admittedly having a husband who speaks Danish helps a lot with this kind of logistical thing but I think anyone could figure the system out with a little bit of patience.)

after we got to the hotel we called Martin and arranged our evening with his family.  he would be by to pick us up around 4:30 and ended up arriving around 4:10 which made no difference as we had no other plans for the afternoon.  He lives a somewhat near the airport in a town called Dragor (the O has a slash through it in Danish)

Here is a little blurb about the town (a really cute village) - Dragør has a very special atmosphere, narrow cobbled streets, small colourful houses, local museums where the past is relived during the summer months, nice restaurants, and of course an old harbour.

we stopped at Martin's home and had a glass of wine after meeting the kids (it had been eight years since Phil had seen them and I had never met them- delightful Thomas and Emma) then headed out to what I think might have been Cafe Sylten - a casual place on the beach where mostly we had burgers but Phil had lamb and Susan ordered something else.  Food was good and it was a very pleasant evening.
We called it a day early because we had suffered an overnight flight and Martin, Susan and the kids were off early the next morning for their holiday.

here is a photo Susan took of us when were were having wine at their - "Architectural Digest" worthy - beautiful home overlooking the water between Denmark and Sweden. 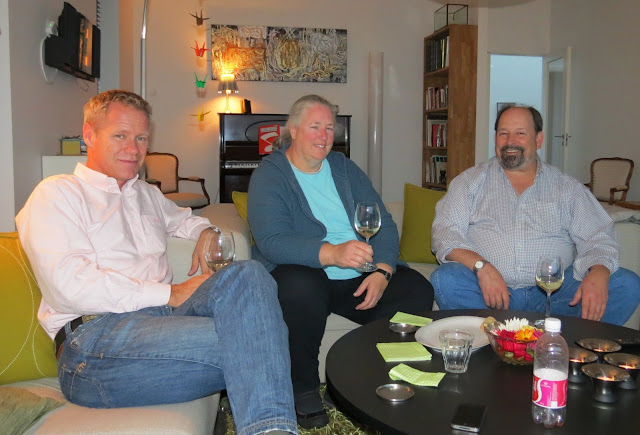 so that was Friday and on Saturday night we had plans to see Poul and Lene at their house for dinner.  they live in a northern suburb of CPH called Espergaerde.
Posted by TOR at 2:41 PM